Snapshots of projects across the continent capture an EV revolution in full power drive. 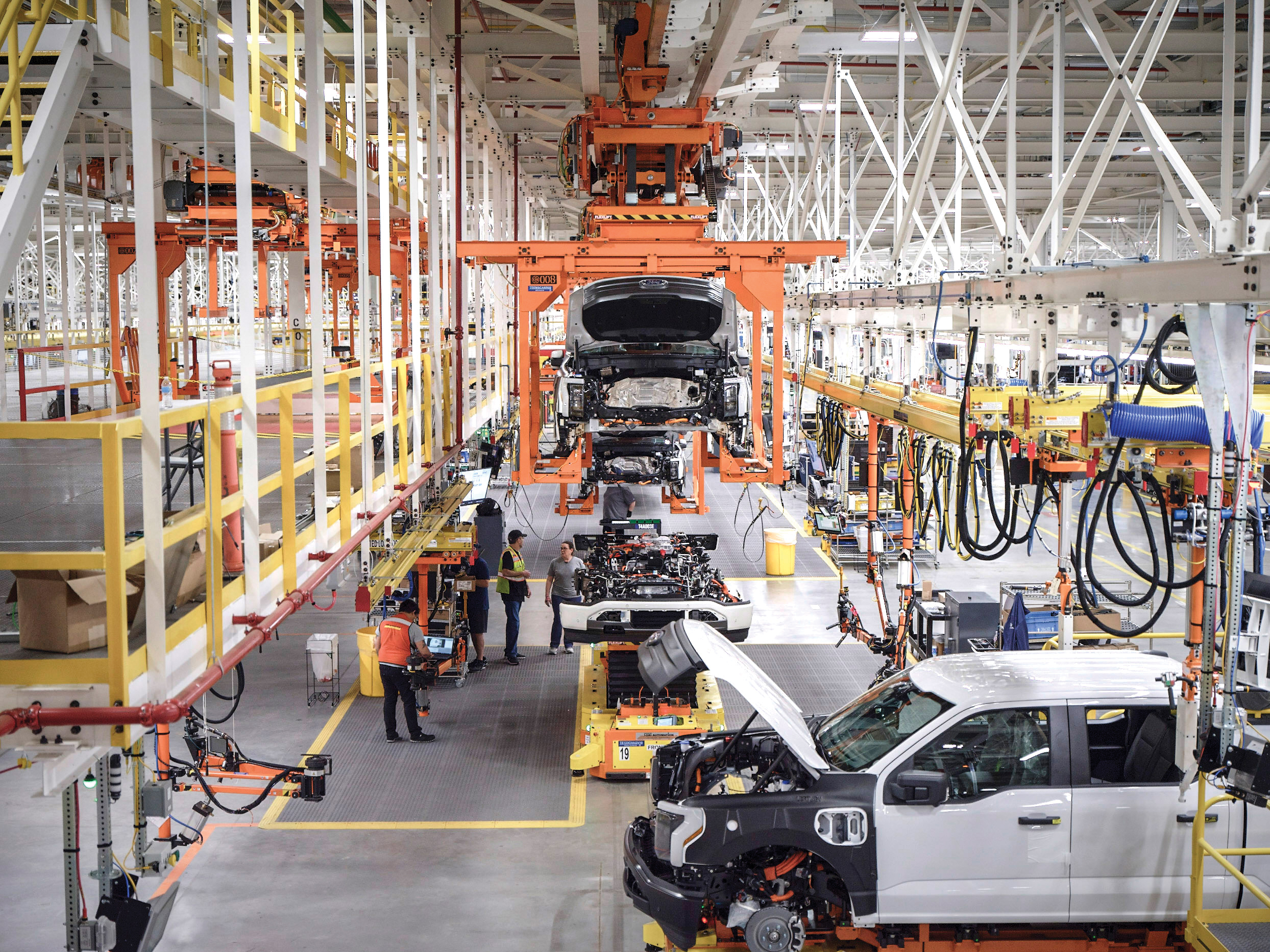 emember as a child trying to learn the difference between “electric” and “electronic,” two words separated only by that “ON” switch in the middle?

Today — with a surge in EV demand and a shortage of semiconductors — they are the two most operative words in the automotive industry. How they twist together to alter the DNA of mobility is a story best told by an array of projects now flipping the “ON” switch. The billions of dollars in investment are coming in big chunks: Rivian’s $5 billion in Georgia; Mercedes’ 6 million sq. ft. in Alabama, Ford’s planned BlueOval mega campus in Tennessee with a sister battery plant in Kentucky.

The announcements keep coming fast and furious, at a rate to rival a Tesla from a dead stop. Just as assembly lines are evolving to modular, station-to-station production, here we present a non-linear report from the front lines of the industry. Buckle up. 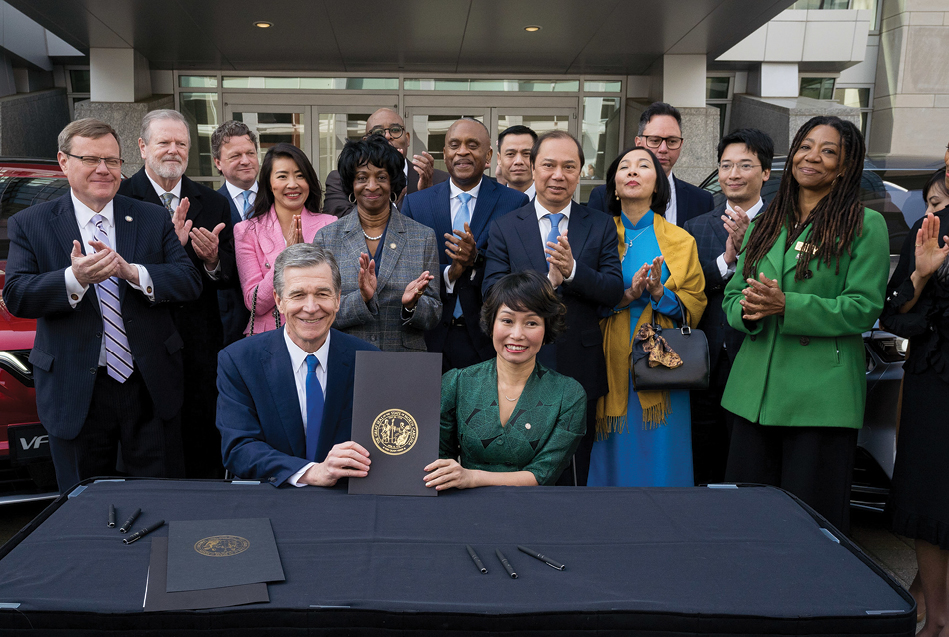 In late April at its historic Rouge Complex in Dearborn, Michigan, Ford launched production of the electric F-150 pickup. “Today we celebrate the Model T moment for the 21st Century at the Rouge Electric Vehicle Center,” said Ford Executive Chair Bill Ford. “The Rouge is where Ford perfected the moving assembly line, making it a fitting backdrop as we make history again.” is the first Ford plant without traditional in-floor conveyor lines, instead using robotic Autonomous Guided Vehicles to move F-150 Lightning trucks from one workstation to another.

Ford says it has invested a total of $950 million and created 750 jobs at the Rouge Electric Vehicle Center. “Ford’s investment in Michigan for F-150 Lightning alone now totals more than $1 billion,” the company explained, “with 1,700 recently created jobs spread among five Ford plants in the state, including Van Dyke Electric Powertrain Center, where Lightning electric motors and electric transaxles are assembled, and Rawsonville Components Plant, where Lightning batteries are assembled.” 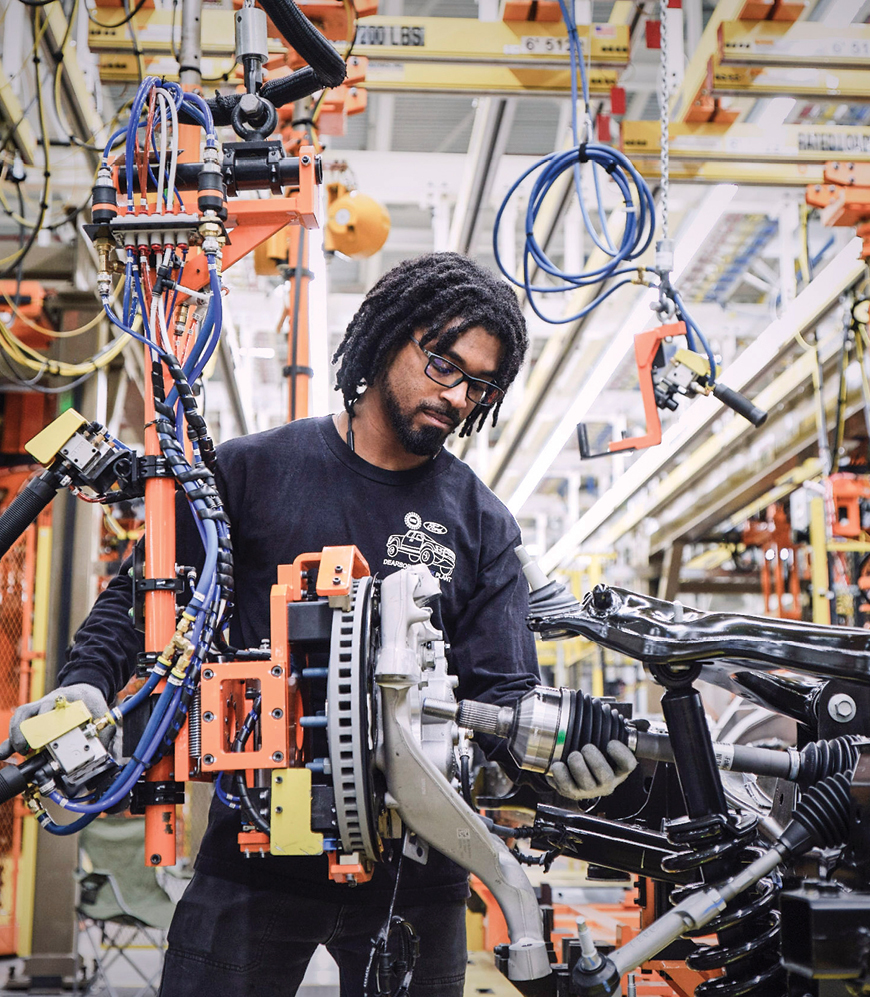 In late March, Vietnam-based VinFast committed to a $2 billion, 7,000+-job manufacturing investment in Chatham County, North Carolina, that will encompass an entire EV ecosystem. Even the U.S. Secretary of Commerce got in on the good news. “EVs are the future of auto manufacturing,” said Commerce Secretary Gina Raimondo while touting the Biden Administration’s clean-tech and domestic investment bona fides. “The only question is whether we want EVs and their components made here in America or somewhere else.”

The Vietnamese company’s manufacturing complex at Chatham County’s Triangle Innovation Point megasite will cover 800 hectares (1,977 acres) with production of electric cars and buses and EV batteries, and an area for suppliers. After an anticipated production launch in summer 2024, Phase 1 is expected to churn out 150,000 vehicles a year. The Hanoi-headquartered company already has a plant in Haiphong, Vietnam, that will have the capacity to produce 950,000 vehicles per year by 2026. VinFast’s family of products in its home country includes e-scooters, electric buses and electric cars, charging station systems and green energy solutions.

“North Carolina’s strong commitments in building a clean energy economy, fighting climate change and reducing greenhouse gas emissions in transportation make it an ideal location for VinFast to develop its premium, smart and environmentally friendly EVs,” said Le Thi Thu Thuy, Vingroup vice chair and VinFast global CEO. VinFast evaluated over 50 megasites in 10 states for their facility, said the Economic Development Partnership of North Carolina. The project adds to a spate of future mobility projects in North Carolina that include Arrival’s $41.2 million U.S. headquarters and multiple vehicle and battery plants in the Charlotte region; Doosan Portable Power’s $71.93 million manufacturing facility in Statesville (also in the Charlotte metro); and Toyota’s $1.29 billion battery manufacturing plant that will employ 1,750 at the Greensboro-Randolph Megasite in Liberty. 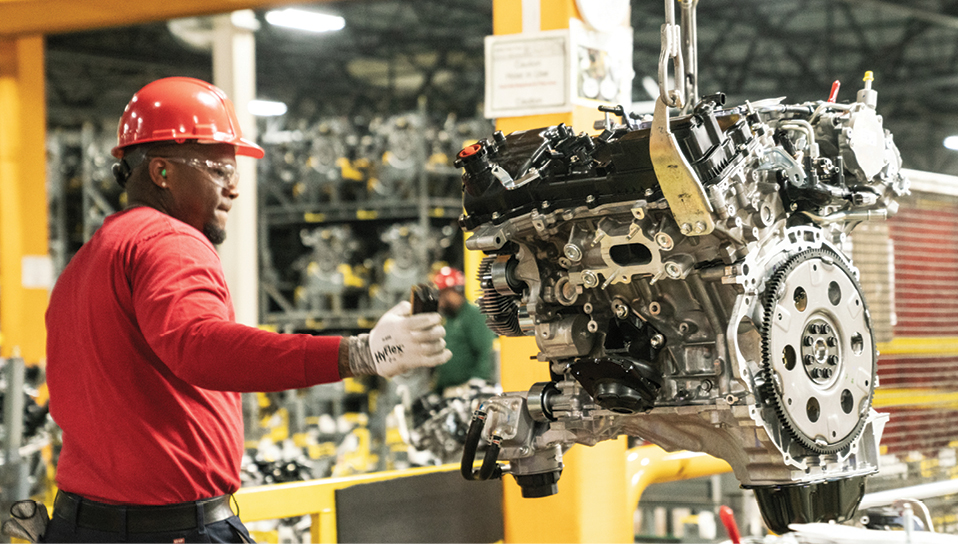 When Toyota announced its investment at the Greensboro-Randolph site, it stated its location process was driven in part by renewable energy availability as well as support from local stakeholders, including governments, utilities, partners, and others. Among the following elements it identified as driving the decision were: 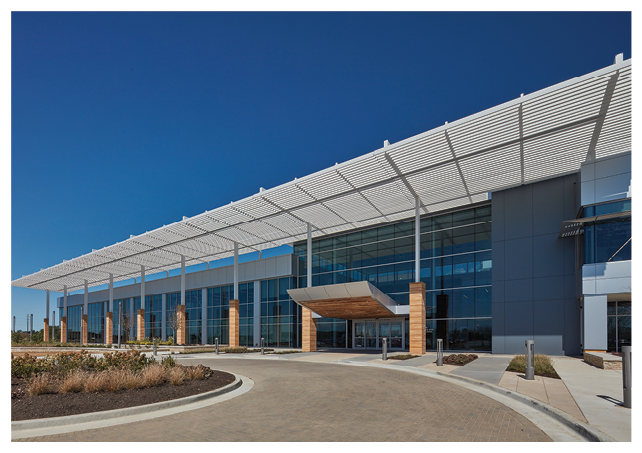 The Japanese automaker’s facility projects and workforce growth range far and wide elsewhere on the continent. In April, Toyota said it would add 220 new positions to its Production Engineering Division, which serves as the go–between for design and manufacturing, in order to support North American operations “as plans to advance electrified vehicle production kick into high gear.” In 2021, 25% of Toyota’s total U.S. sales were electrified. The company plans to further expand its global portfolio of electrified vehicles to 70 by 2025. While Georgetown, Kentucky, is the headquarters for the division and is currently home to nearly 800 engineers, the division employs more than 1,800 spread across its North American footprint.

Later in April, Toyota said it would invest $383 million across four plants in Huntsville, Alabama; Georgetown; Troy, Missouri; and Jackson, Tennessee, in order to support production of both four-cylinder engines and options for hybrid electric vehicles. 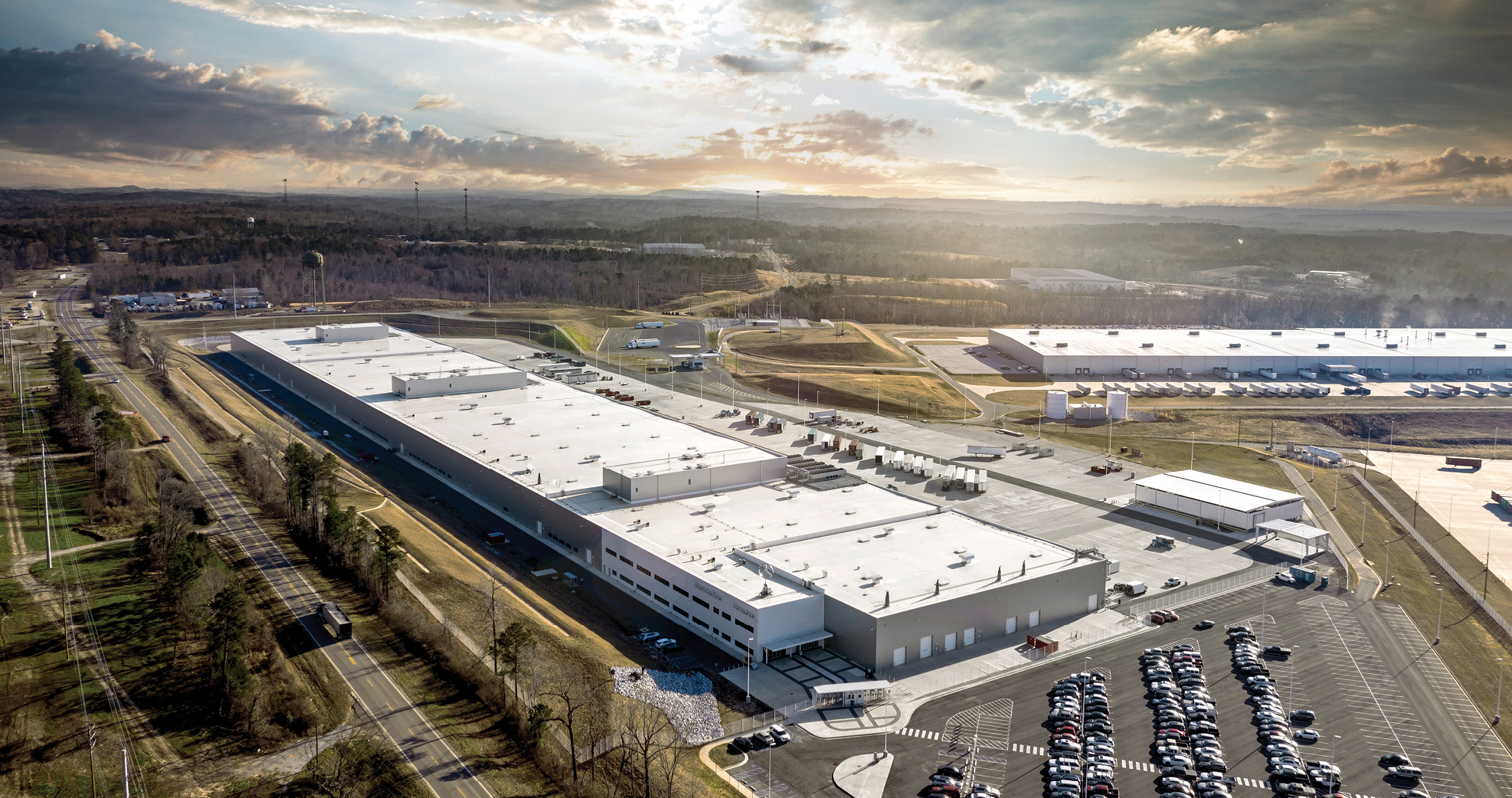 Mercedes-Benz in March opened a new 600-job battery plant at its Tuscaloosa site in Bibb County, Alabama, a few months ahead of the start of production of all-electric Mercedes-EQ vehicles in the United States. The company’s Tuscaloosa plant has produced large SUVs for 25 years. Since the 1990s, the company has invested more than $7 billion in Alabama, $1 billion of which is going toward the battery plant, logistics centers and a production line upgrade to make EVs. Mercedes-Benz U.S. International employs around 4,500 people and secures an estimated additional 11,000 jobs with suppliers and service providers in the region. 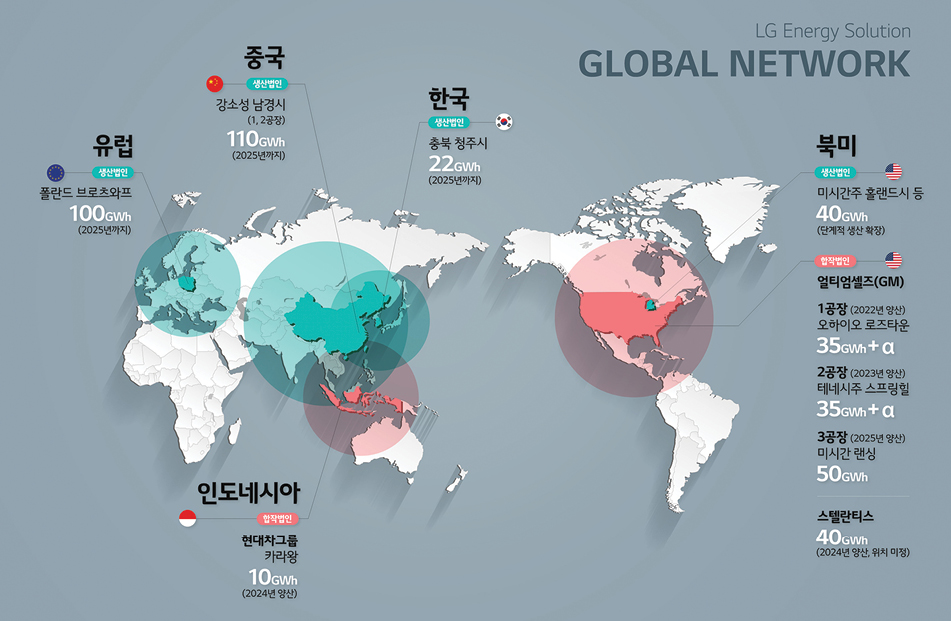 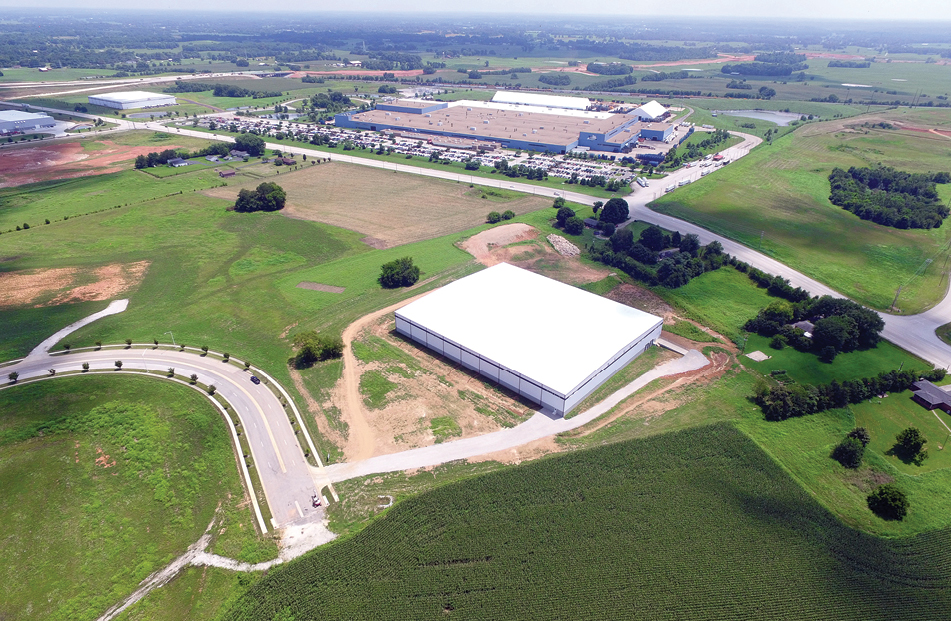 In April, Japan-based EV battery technology company Envision AESC Group announced it will invest $2 billion in a new 3-million-sq.-ft. gigafactory in the Kentucky Transpark (pictured) in Bowling Green, Kentucky. The 30-gigawatt-hour plant will create 2,000 skilled jobs in the region, “producing battery cells and modules to power the next generation EVs produced for multiple global automotive manufacturers,” the company said. Slated to receive up to $116.8 million from state incentive programs and up to $5 million in grant-in-aid for skills training, the operation will be powered by 100% renewable energy supplied by onsite generation and purchased locally from the Tennessee Valley Authority. Combined with the Ford BlueOvalCity project in Glendale, the project drives Kentucky’s production capacity for EV batteries to 116 gigawatt-hours, No. 1 among all U.S. states. Envision AESC also is building gigafactories in Douai, France, and Sunderland, UK. 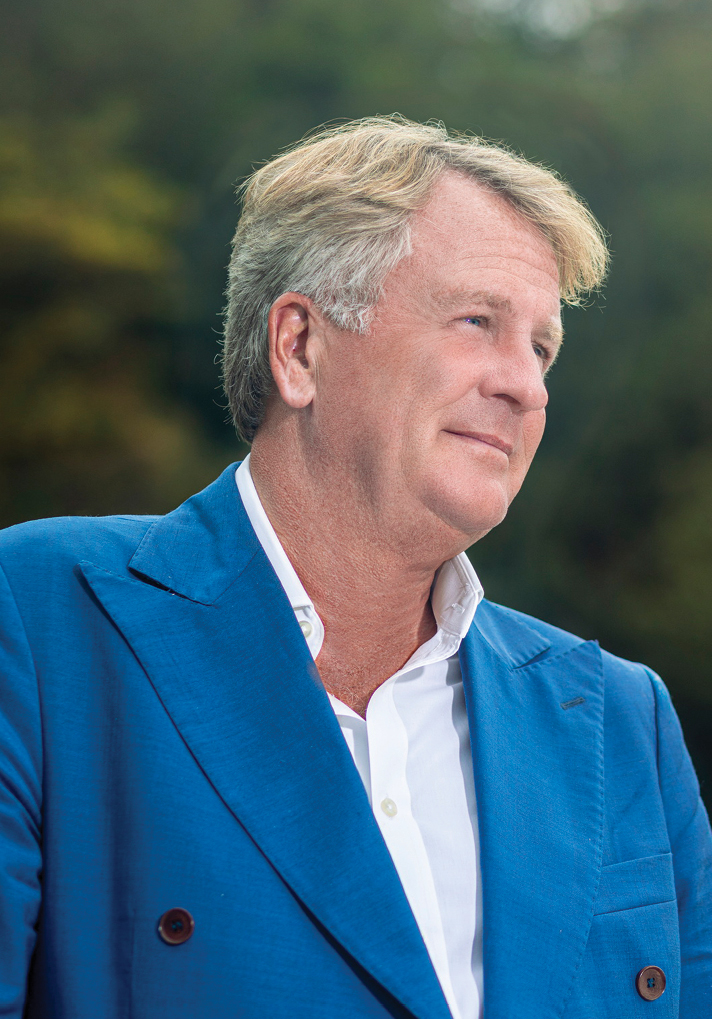 Lars Carlstrom, the founder-CEO of Italvolt, in April announced the launch of a new company, Statevolt, which will construct a $4 billion, 54-gigawatt-hour gigafactory in Imperial Valley in Southern California, with enough capacity to serve the battery needs of around 650,000 EVs a year at full capacity. “To launch the new facility, Statevolt has also signed a Letter of Intent (LOI) with Controlled Thermal Resources (CTR),” the new company said in a release. “Under the terms of the LOI, CTR will deliver sustainable, locally produced lithium and geothermal power, from the company’s to-be constructed Hell’s Kitchen Lithium and Power development. Statevolt is currently undertaking due diligence to determine the best location on which to build its facility.” The company said the facility would deliver up to 2,500 direct jobs, and described the arrangement with CTR as “one of the first of its kind in the world” as Statevolt will “source its key feedstock, lithium, and its power from local resources, in order to minimize the environmental impact of production and build a more sustainable and secure supply chain.”

The project comes as Carlson’s Italvolt also signs agreements for another gigafactory in the Piedmont region of Italy. 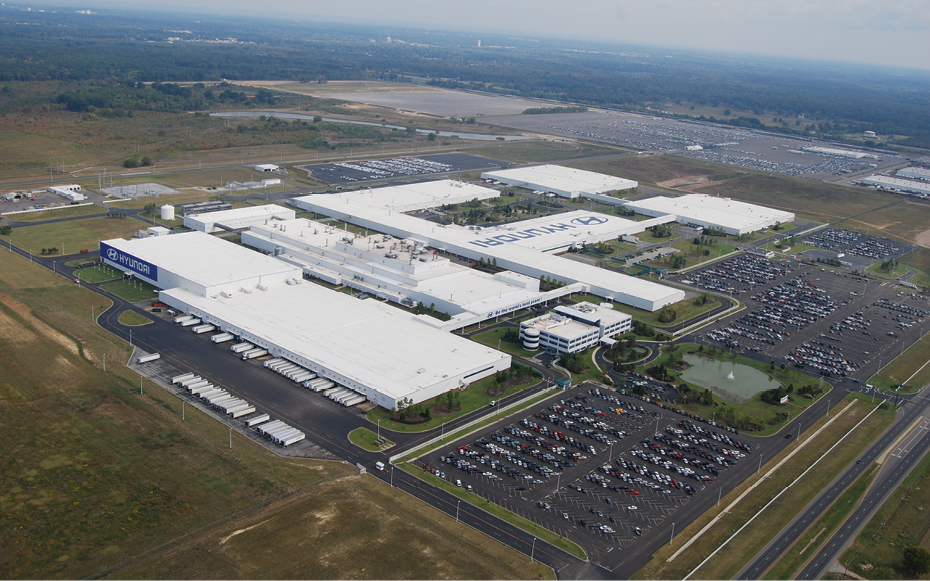 Hyundai Motor Manufacturing Alabama (HMMA) in April announced it will continue to grow its sport utility vehicle production capabilities later this year with the addition of the hybrid version of the Santa Fe, marking the beginning of Hyundai’s EV production in the United States. Recently announced production enhancements at HMMA including the start of production of Santa Fe Hybrid will include $300 million in investments and the creation of 200 additional jobs. A recent Newsweek cover anointed Hyundai Motor Group Executive Chair Euisun Chung as “Visionary of the Year.” 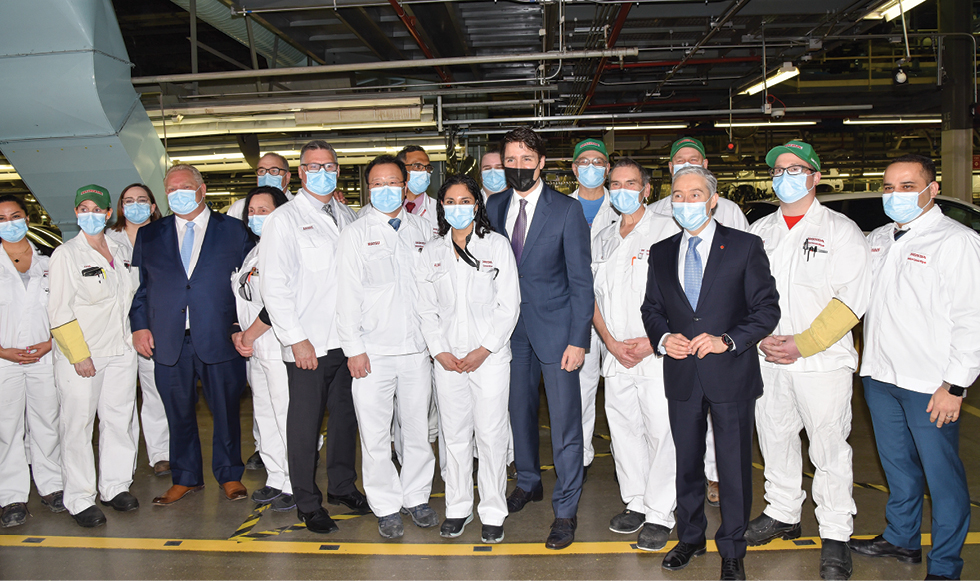 Plant workers, union and company leaders and provincial and federal leaders including Canadian Prime Minister Justin Trudeau gathered at Honda of Canada’s HCM plant in Alliston in March to celebrate the news that the company will invest C$1.38 billion over six years to upgrade its facilities there. “Today’s announcement marks an important step in the company’s pathway to electrification and will see HCM become the North America Lead Plant for the all-new 2023 CR-V Hybrid crossover,” said the company. “This will bring Honda’s total Canadian facilities investments to more than C$6.5 billion since 1986, when Honda became the first Japanese auto maker to build a Canadian manufacturing facility.”