Life sciences and the science of good living offer a heady blend in Washington. 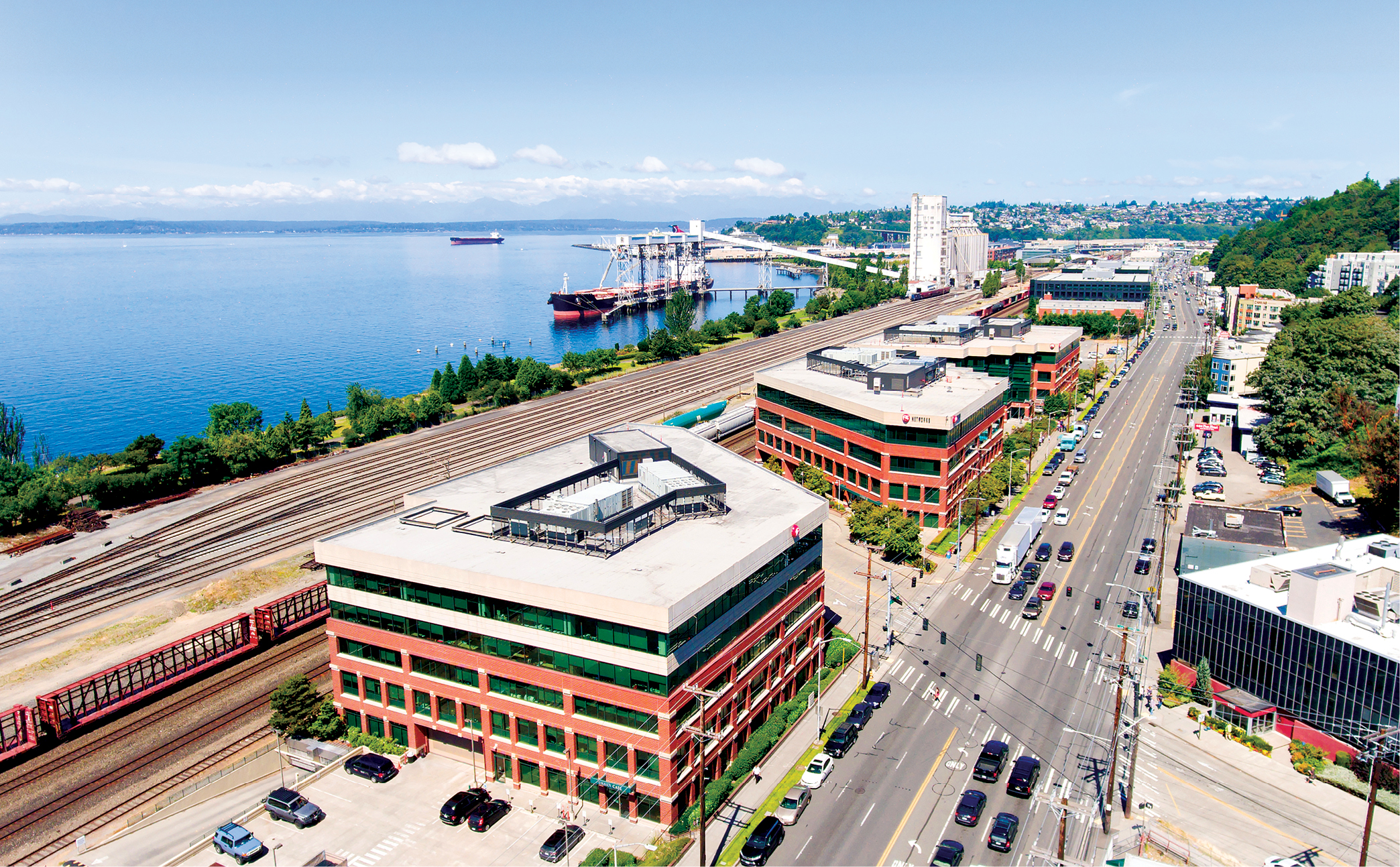 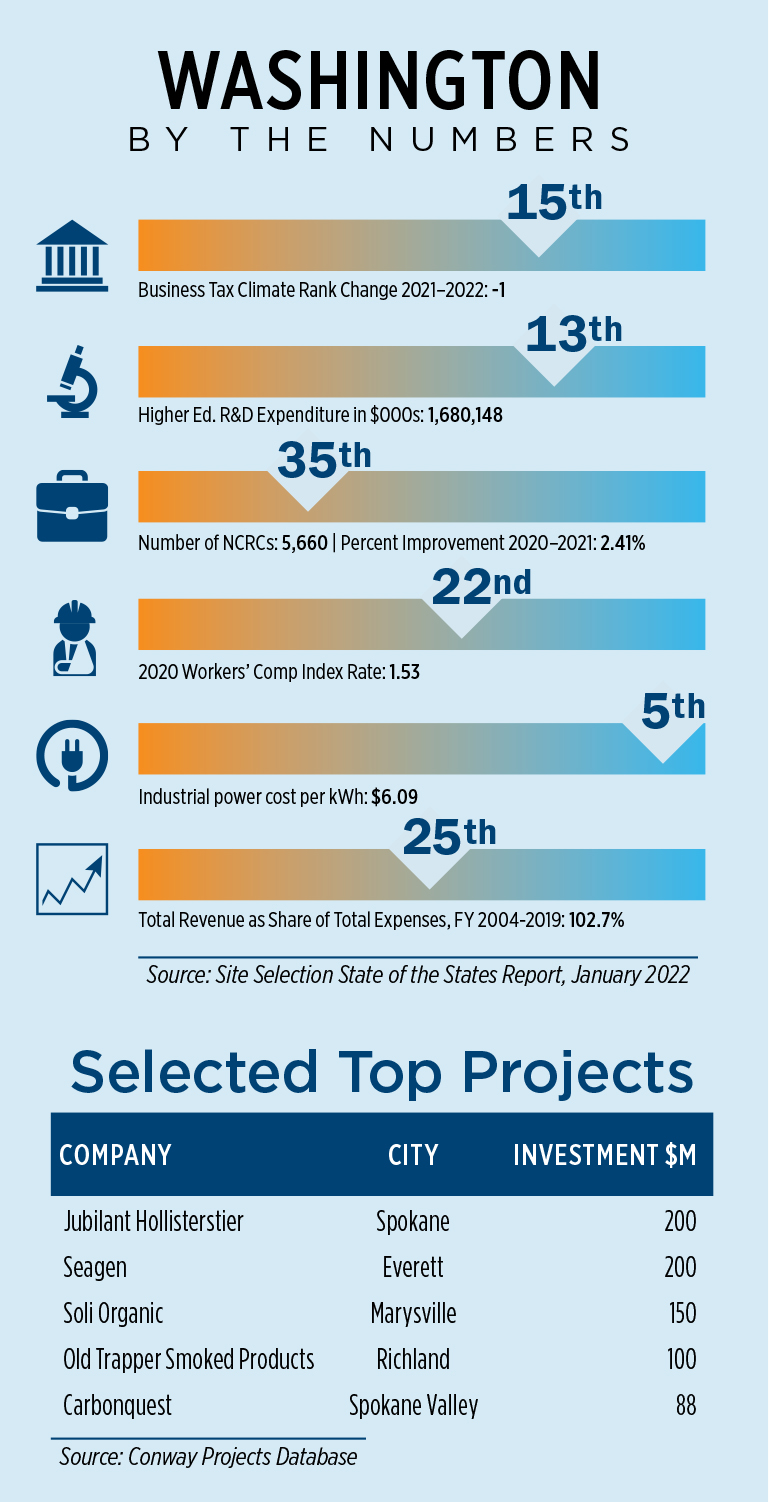 t’s not every day you encounter a pharmaceutical manufacturer whose “About Us” page starts with a quotation from Italian novelist Paulo Coelho’s “The Alchemist”:

“There was a language in the world that everyone understood ... It was the language of enthusiasm, of things accomplished with love and purpose, and as part of a search for something believed in ...”

So begins the self-description of Selkirk Pharma, a contract pharmaceutical fill-and-finish manufacturer based in Spokane, Washington, whose goal is to be the world’s most reliable manufacturer of injectable drug product. In November 2021, Selkirk executed a purchase and sale agreement to acquire 10.7 acres of land adjacent to its facility to add “critically needed capacity for the manufacture of commercial and clinical trial drugs,” including vaccines and biological therapeutics.

Seattle may be the state’s life sciences hub, but Spokane is spinning out its own cluster in the industry.

“Spokane is a special place to live, work, and invest,” said Patrick Haffey, Selkirk’s CEO. “We are grateful to be here and plan to make a series of long-term investments in this community over the coming years.”

The land acquisition expands the Selkirk campus to more than 27 acres, providing space for three standalone factories, the company explained, with Plant 1 completed earlier this year. 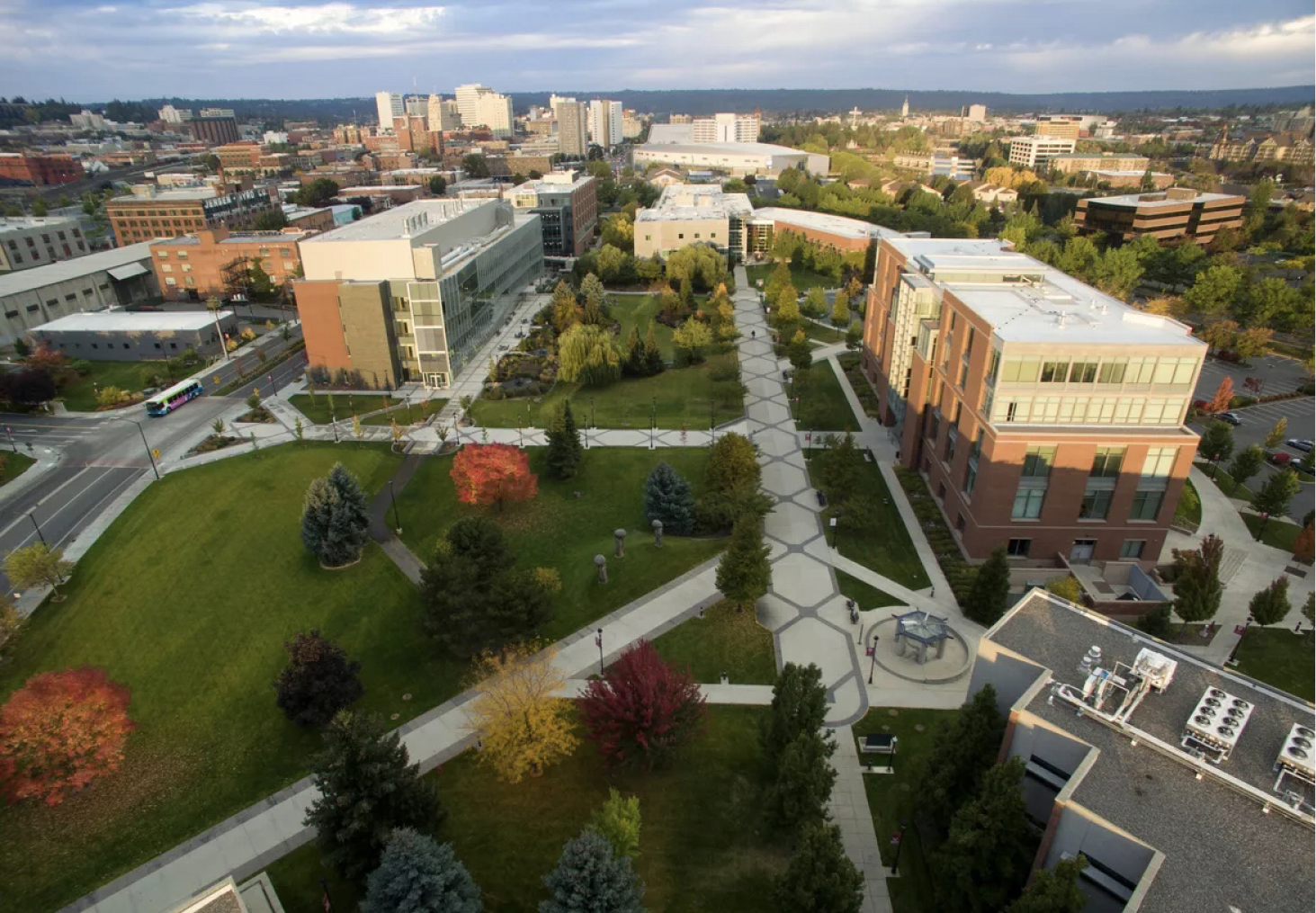 With a robust membership and grant funding out of the gate, the Evergreen Bioscience Cluster in Spokane aims to make the state and the entire Mountain Northwest “a magnet for bioscience.”

At full capacity, the Selkirk campus is expected to employ roughly 750 scientists, engineers and operations personnel.

Selkirk’s original building launched construction in June 2021, just three years after the company’s founding. “Selkirk was founded two years prior to the onset of the COVID-19 pandemic with the intent to build much-needed pharmaceutical manufacturing capacity on U.S. soil,” Haffey said that month. “Seeing three years of work come together in the construction of this building is an important milestone for our biopharmaceutical clients and their patients.”

In an interview with Contract Pharma this fall, Haffey said, “Outsourcing is an obvious component to risk reduction and reliability, but it can play a bigger role than that. At Selkirk, we come to work and all we think about is quality manufacturing done as efficiently as possible. We just moved into our new building a couple months ago, a ground-up, greenfield, purpose-designed building for contract manufacturing, with concurrent processing of multiple products within the same facility. We’re qualifying that capacity now, and we’re within months of GMP production for fill-finish services.”

In May, India-based Jubilant HollisterStier LLC announced it had entered into a $149.6 million cooperative agreement with the federal government for vaccine production that will enable the company to invest $193 million to double its injectable filling production capacity at its Spokane facility by 2025. The agreement is in addition to the company’s $92 million filling line expansion announced in November 2021, which will be commercially available by the end of 2024.

The two projects fit well into Greater Spokane Inc.’s Life Sciences Spokane plan, part of the organization’s larger VISION 2030 strategy to create robust health care and life sciences industry growth, projecting an annual economic impact of more than $1.7 billion and over 9,000 jobs for our region by 2030.

A five-hour drive to the west on the state’s opposite end, Seattle’s life sciences construction pipeline is the fourth largest in the nation at 1.5 million sq. ft. Moreover, among expected construction completions over the 18 months beginning in October, more than half of the 1.3 million sq. ft. is pre-leased.

The Puget Sound region employs 19,400 people in the life sciences, with a healthy 49% growth rate in the sector’s employment over 10 years, says Cushman & Wakefield. It’s not just operations, either, as 150 life sciences companies are headquartered there, including Adaptive Biotechnologies, Sana Biotechnology and NanoString Technologies.

A total of $351.3 million in biotech startup funding deals had occurred through September in the Seattle area, says the report, including Kineta’s merger with Boston-based Yumanity Therapeutics, and the looming $40 billion acquisition by Merck of Bothell-based biotech firm Seagen, now employing nearly 3,000, in a deal expected to close by this fall.

“The majority of the region’s life sciences inventory is situated in the Lake Union submarket,” the report notes. But some new office projects have been converted to life sciences because of high demand. “Unison Elliott Bay is a current 300,000-sq.-ft. office-to-life-sciences conversion that will become available in early 2023,” C&W says. There is another 3.9 million sq. ft. of life sciences space in the planning stages in or near the submarket, with rents in the $70-$90 triple-net range.

Other submarkets heating up because of low vacancy include Bothell, where Sana Biotechnology leased 80,000 sq. ft. that will replace its manufacturing facility in Fremont, California. Meanwhile, Alexandria is pursuing a development in Bellevue and SECO is planning the 1.4-million-sq.-ft. Southport West project in Renton.

Among other recent lease deals:

Such investments are undergirded by life sciences degree completions that totaled 2,562 in 2020 from the University of Washington, Seattle Pacific University and Seattle University. They find complementary resources internationally known life sciences institutions such as the Allen Institute, Fred Hutchinson Cancer Research Center and Benaroya Research Institute. From 2018 to 2022, Seattle was No. 6 in the nation in NIH funding, with $6.8 billion.

This chart of recent projects shows how both pharma and food & beverage have contributed to Washington’s economy in the past two years. Food and beverage production supports 164,000 jobs in Washington, and agriculture and food manufacturing generate $20.4 billion annually in state revenue. 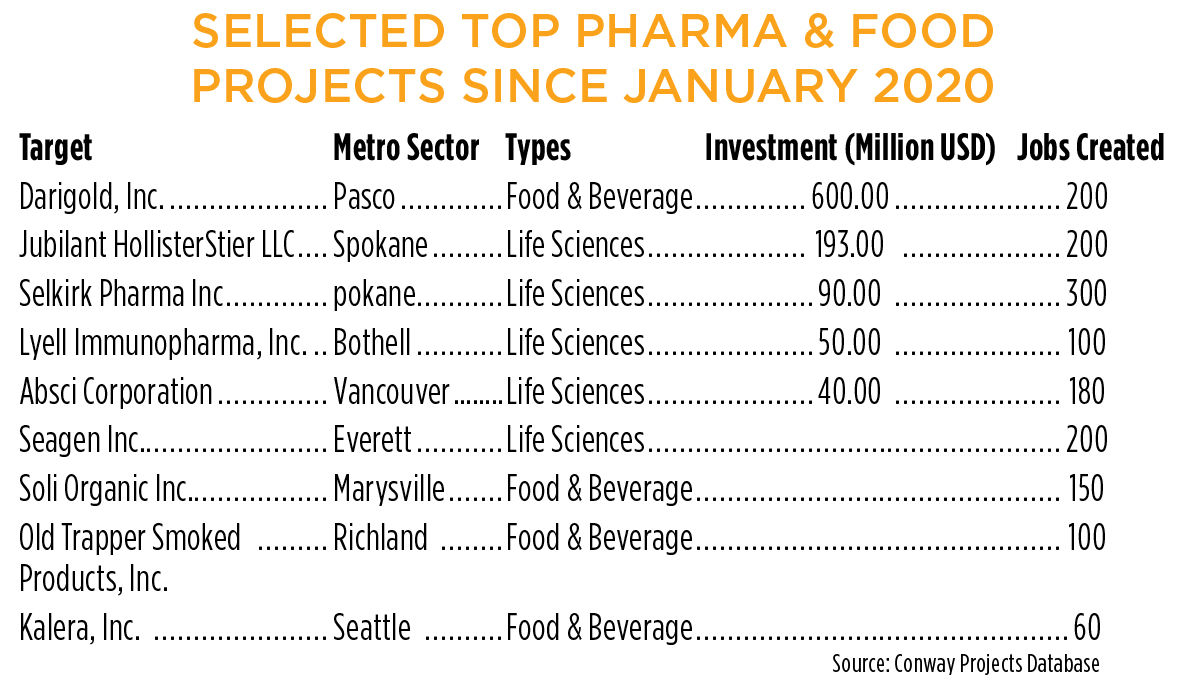 Darigold, the top project on the list, broke ground in September on a facility in Pasco that is slated to open in early 2024 and will process approximately 8 million pounds of milk per day when fully operational from more than 100 dairy farms in surrounding communities. Since the cooperative’s original announcement in summer 2021 after reaching a land sale agreement with the Port of Pasco, the planned investment has grown from between $450 million and $500 million to $600 million.

“The Pasco project represents our third major capital investment in as many years, the largest investment in our co-op’s 104-year-history, and a significant step in an ongoing strategy to expand and modernize Darigold,” said Joe Coote, the co-op’s CEO. “We are a beloved heritage brand with deep roots in Washington and around the Pacific Northwest, but there’s still considerable opportunity for us to leverage industry growth — here at home and around the world — to become a top-tier global dairy producer.” 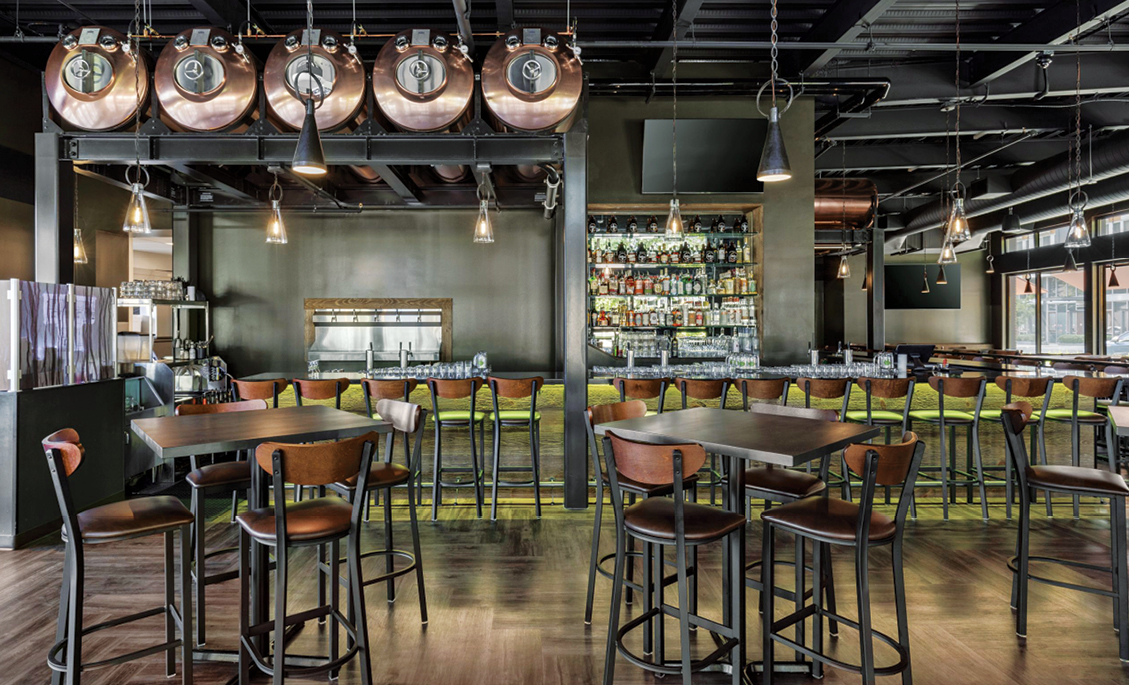 Ten years after brewing its first batch of beer, Bellevue Brewery completed construction in September on its new facility in Bellevue’s Spring district.