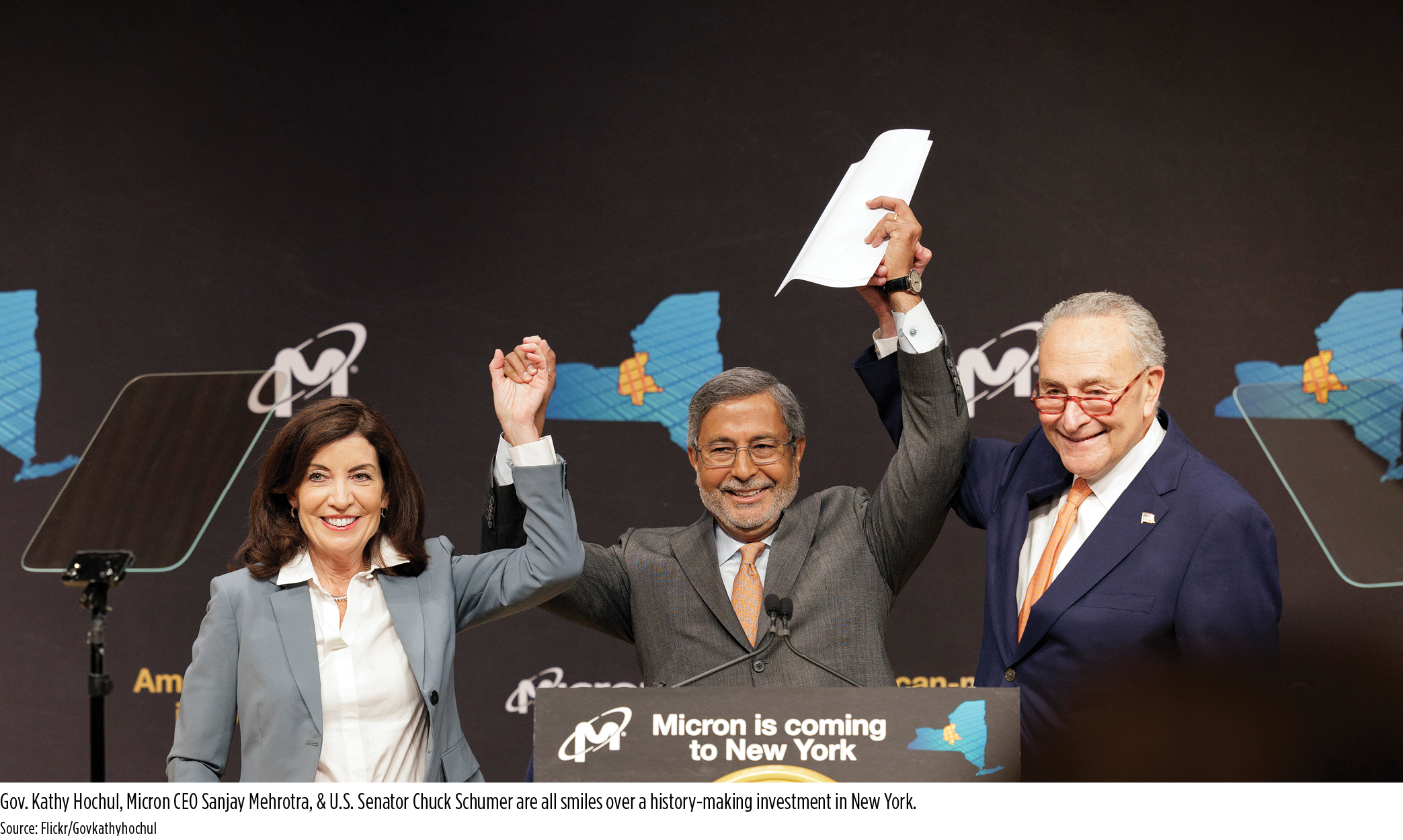 or New York’s political leaders, no amount of hyperbole seemed over the top as they trumpeted Micron’s selection of a 1,200-acre site north of Syracuse for a $100 billion semiconductor plant. “Life-altering,” said Gov. Kathy Hochul of Micron’s October 4 announcement of one of the largest economic development deals in U.S. history and the biggest ever in New York State. Sen. Chuck Schumer called it “our Erie Canal moment,” with Gov. Hochul adding that, “the economic future for New York State is now beyond imagination.”

Micron’s selection of New York follows form with the wave of megafab announcements that has followed the August 25 signing of the federal CHIPS and Science Act, which set aside $52 billion to bolster domestic semiconductor manufacturing. As with projects slated for Texas, Idaho and Ohio, New York offered available land and utilities, an abundant, quality workforce and a robust package of state and local incentives, the latter bolstered by the state’s new $10 billion Green CHIPS program, which Hochul touts as the most ambitious lure in the nation for semiconductor investments. In addition to federal credits, New York offered some $5.5 billion in incentives over the long life of the project.

“An investment of this scale in the U.S. is simply not possible without significant government and community support,” said Micron President and CEO Sanjay Mehrotra. Micron says the facility will create 9,000 direct jobs and an additional 40,000 “community jobs.” Site preparation is to commence next year with construction to begin in 2024.

With warmer, lower-tax states having seized the lead in semiconductor manufacturing, Micron’s decision to locate in the publicly owned White Pine Commercial Park in Onondaga County may seem unexpected, but not to Deloitte Global Location Strategy Leader Darin Buelow, who spearheaded the search. Buelow shared his thoughts with Site Selection in an Oct. 11 interview.

On the “surprise” factor:

“Some people might think of New York as a high-cost location, or they might have other preconceptions about things like negative population growth. They might be thinking, ‘Isn’t everybody moving south, where the taxes are low?’ But these are massively huge decisions, and you end up going through rigorous levels of analysis. And when you do that, you find that states in the North can be competitive for projects like this. Those factors include things like climate change, water supply and surety of talent. If you step back and reflect on all those things, you might not be so surprised.”

“It was an aggressive and bold play. It’s going to be important for any company the size and nature of Micron as they’re looking at New York. That’s absolutely going to be an important factor for them. It was important for New York to come out like that and come up with an incentive like Green CHIPS that demonstrates their commitment to the industry.”

On the importance of water:

On the White Pine megasite:

“White Pine has been enlarged several times. It’s well over 1,000 acres, and not every site around the country can say that. There are some that are bigger, but they may not have some of the other attributes that wafer fab companies are looking for. You need not just proximity to a massive supply of water, but also wastewater treatment, electric and gas. And it can’t be so far out in the boondocks that you aren’t going to be able to find the labor that you need. Sometimes you might think you have the perfect site, but it fails on one of these criteria and so it’s just not feasible.”

On the Upstate New York workforce:

“It’s no secret that that the Syracuse region has a legacy of large manufacturing. It’s a place that knows how to build things and has manufacturing in its DNA. And with Syracuse University and the engineering talent that’s there and could also be further augmented and customized to be pivoted towards semiconductor, that’s an asset, as well. Also, an asset like Albany NanoTech Complex is a demonstration of New York’s ecosystem and an important expression of New York’s commitment to chips.”

On the future of U.S. semiconductor manufacturing:

“The companies that have announced projects in Texas, Arizona, Ohio and now New York have done so in an era where the federal government was talking about the CHIPS Act. In each case, those announcements stated how important CHIPS would be for them to fulfill the vision of those deployments. So, there does seem to be some kind of causality here. Is this going to continue? I don’t have a crystal ball, but there are major chip producers out there that have not announced fab locations yet in the United States. As their competitors are announcing locations, it would be a fair expectation that the U.S. would at least get a shot and would be considered for these fabs.”