The Carbon Capture Race Is Heating Up In Nebraska

The builder of a $2.5 billion pipeline moves from Dallas to Omaha to oversee the project. 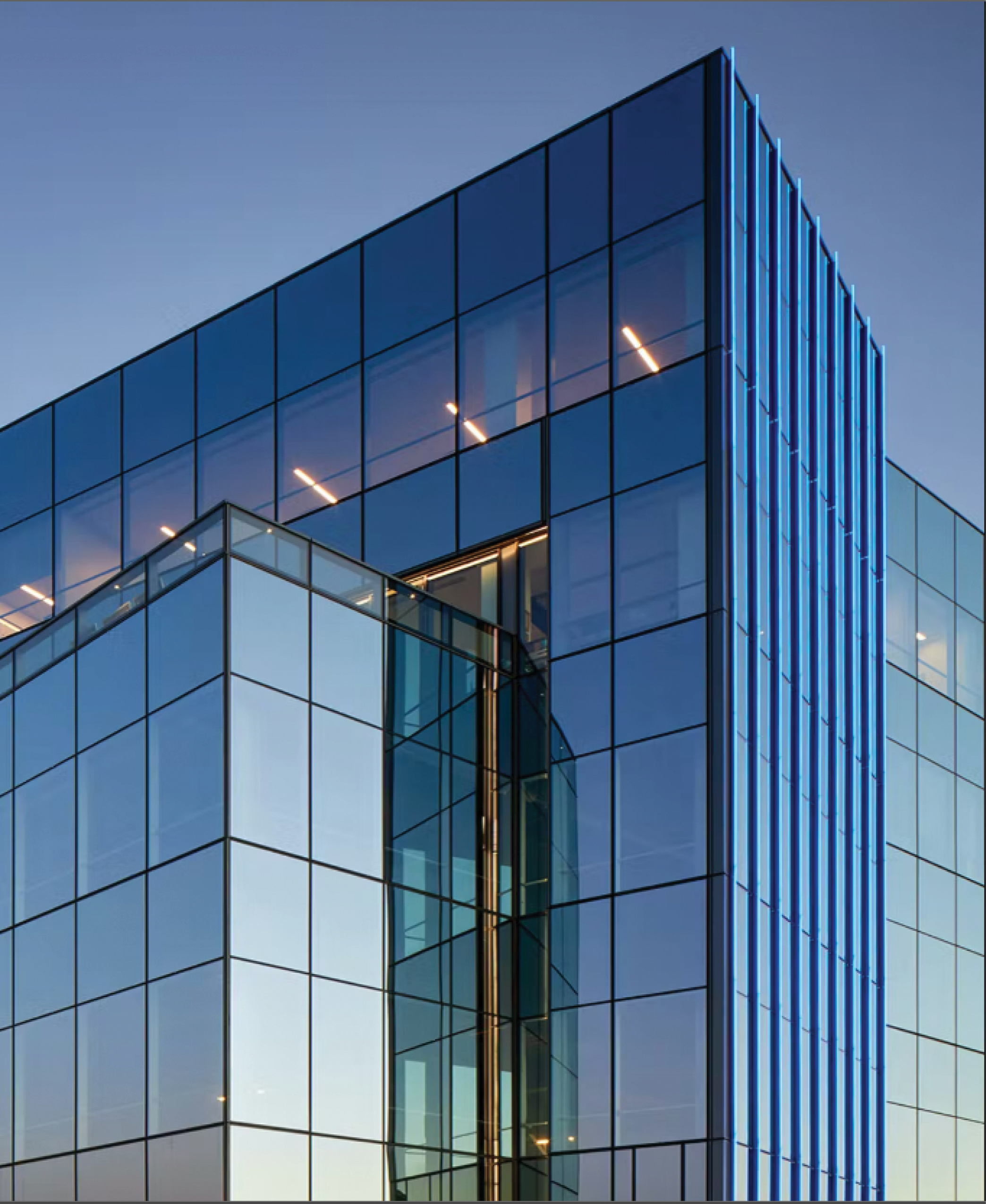 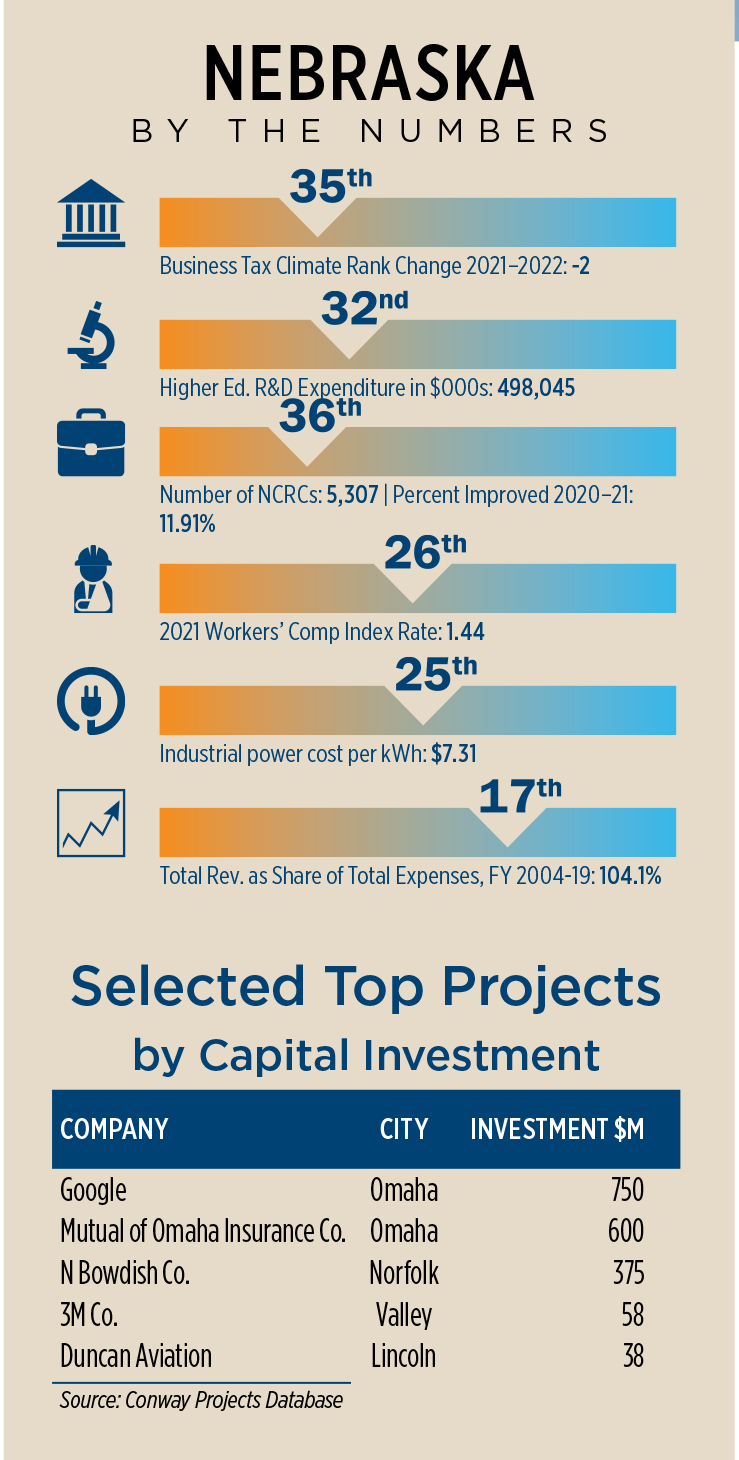 company that’s building infrastructure for a carbon-neutral future is betting billions on a business based in Nebraska and the Corn Belt. Warren Buffett, the Oracle of Omaha, now has company in the form of Navigator CO2, which is relocating its corporate headquarters from Dallas to Omaha in a gambit aimed at transforming the economy of the Farm Belt of the central U.S.

“Stage one is in the Corn Belt. Our leadership has an affinity for Omaha. It was important to bring the business home.”

A new home base from which to oversee development of a $2.5 billion pipeline named the Heartland Greenway was the goal all along for Navigator CO2. Now the company will be able to do just that from its new digs in west Omaha.

The relocation was announced July 26 as the firm sets its sights on developing the Nebraska portion of a 1,300-mile-long network that stretches into Iowa, South Dakota, Minnesota and Illinois. The first 120 miles of the line will be built in eastern Nebraska.

Elizabeth Burns-Thompson, vice president of government and public affairs for Navigator, calls it a logical move for the company.

“We wanted to be contiguous to the project footprint,” she says. “Stage one is in the Corn Belt. And our leadership has an affinity for Omaha. Our CEO Matt Vining is based there. It was important to bring the business home.”

Strategic reasons played a role too. “This move allows the business to grow,” says Burns-Thompson. “We’re looking to be a full-service provider so people can manage their carbon. A lot of value-added manufacturing in the agricultural sector takes place in the Corn Belt. Bio-based manufacturing is here. We’re seeing a lot of carbon-forward innovation occurring throughout the Midwest. This will facilitate that process.”

Investing in a New Carbon Economy

The company bills the Heartland Greenway as “pioneering a path to sustainable carbon solutions, while maximizing value for all stakeholders in the new carbon economy.”

Navigator has a track record that suggests it can make this happen in spite of mounting opposition from environmental groups. The firm has already deployed $1.3 billion in capital and constructed more than 1,300 miles of pipeline since 2012. The Heartland Greenway includes 1,300 miles of new liquid carbon dioxide pipeline, including 810 miles through 33 Iowa counties and a permanent storage facility in Illinois. 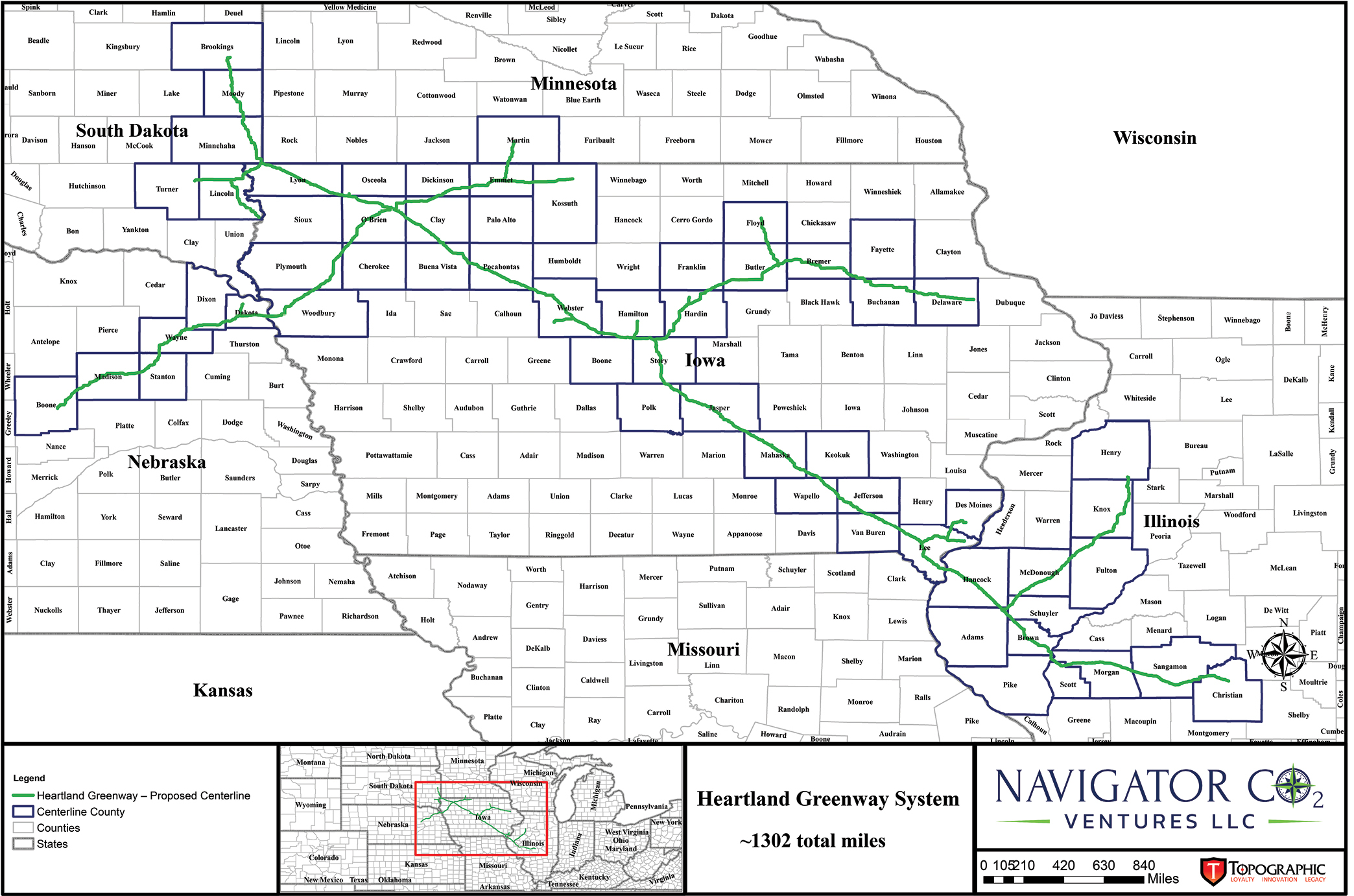 The 1,300-mile Heartland Greenway will be able to move 15 million metric tons of liquid CO2 per year and serve 21 ethanol and fertilizer processors in the Corn Belt.

The pipeline will be capable of moving up to 15 million metric tons of liquid CO2 per year and serve 21 ethanol and fertilizer processors in the Farm Belt. These include familiar brand names like Valero, POET, Big River Resources, OCI and Siouxland Ethanol. Financial backing for the venture is coming from well-known investment firm BlackRock, a multinational with US$10 trillion in assets under management.

The environmental payoff of the project comes in the form of carbon capture. CO2 is captured, dehydrated and compressed into a liquid using equipment added onto the facility without interrupting normal operations. The liquid CO2 is then aggregated from the connected plants and transported via a vast network of new steel pipeline.

There are also financial benefits for participants. Those responsible for decarbonization can qualify for incentives such as the 45Q Tax Credit, low-carbon fuel programs and certain emission offsets. 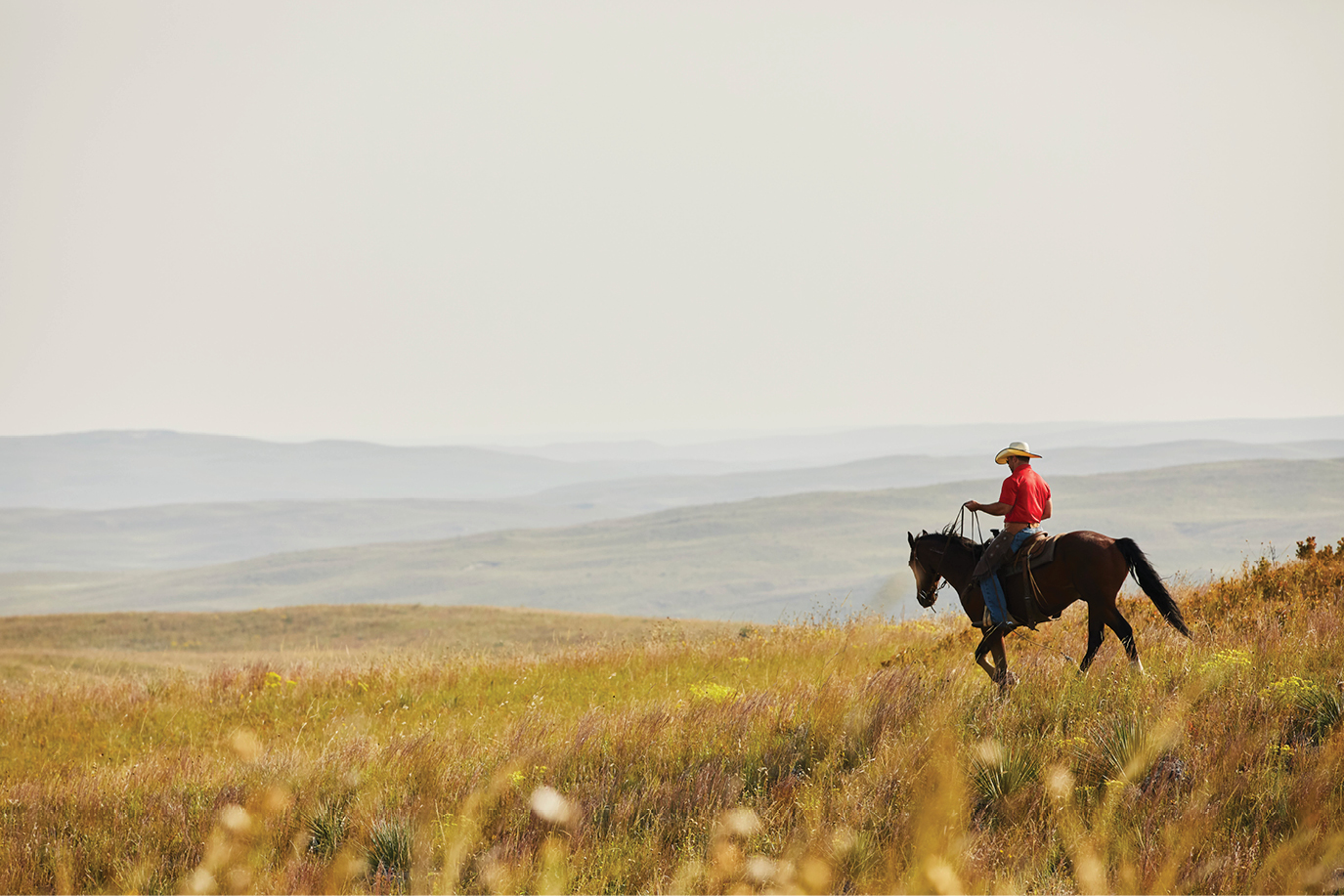 Open spaces like this make the Corn Belt an inviting place for a liquid carbon pipeline project.

Burns-Thompson says it was imperative to get Navigator staff set up in the region closer to where the pipeline will be built.

“That was a key piece of this,” she says. “Having the technical support staff here is vital. We’re starting that early with the headquarters move long before the pipeline construction occurs. We don’t look to do construction on the project until early 2024.” The company estimates that the pipeline could be operational by late 2024 or early 2025.

In the meantime, Navigator staff will be engaged in what Burns-Thompson calls “informational outreach to landowners and stakeholders.” She adds that “our field teams have gone out and started negotiations. We filed applications for permits in Illinois, South Dakota, and next will be the Iowa Utilities Board, followed by Minnesota and Nebraska. A lot of different regulatory and permitting trains are leaving the station at any given time. A number of layers of oversight are part of this. There are also federal permits that we will be working on too, while we are working with landowners directly on negotiation and compensation.”

Heartland Greenway is just one of several carbon sequestration projects taking place in Nebraska. Tallgrass Energy and Summit Carbon Solutions are two others. Tallgrass plans to convert 392 miles of the Trailblazer Pipeline between Fillmore County and its western terminus south of Cheyenne, Wyoming, from natural gas to carbon dioxide. Summit, meanwhile, has announced its own Midwest Carbon Express, a $4.5 billion, 2,000-mile network of pipelines connecting to more than 30 ethanol plants, including six in Nebraska, that will capture carbon and sequester it in North Dakota. 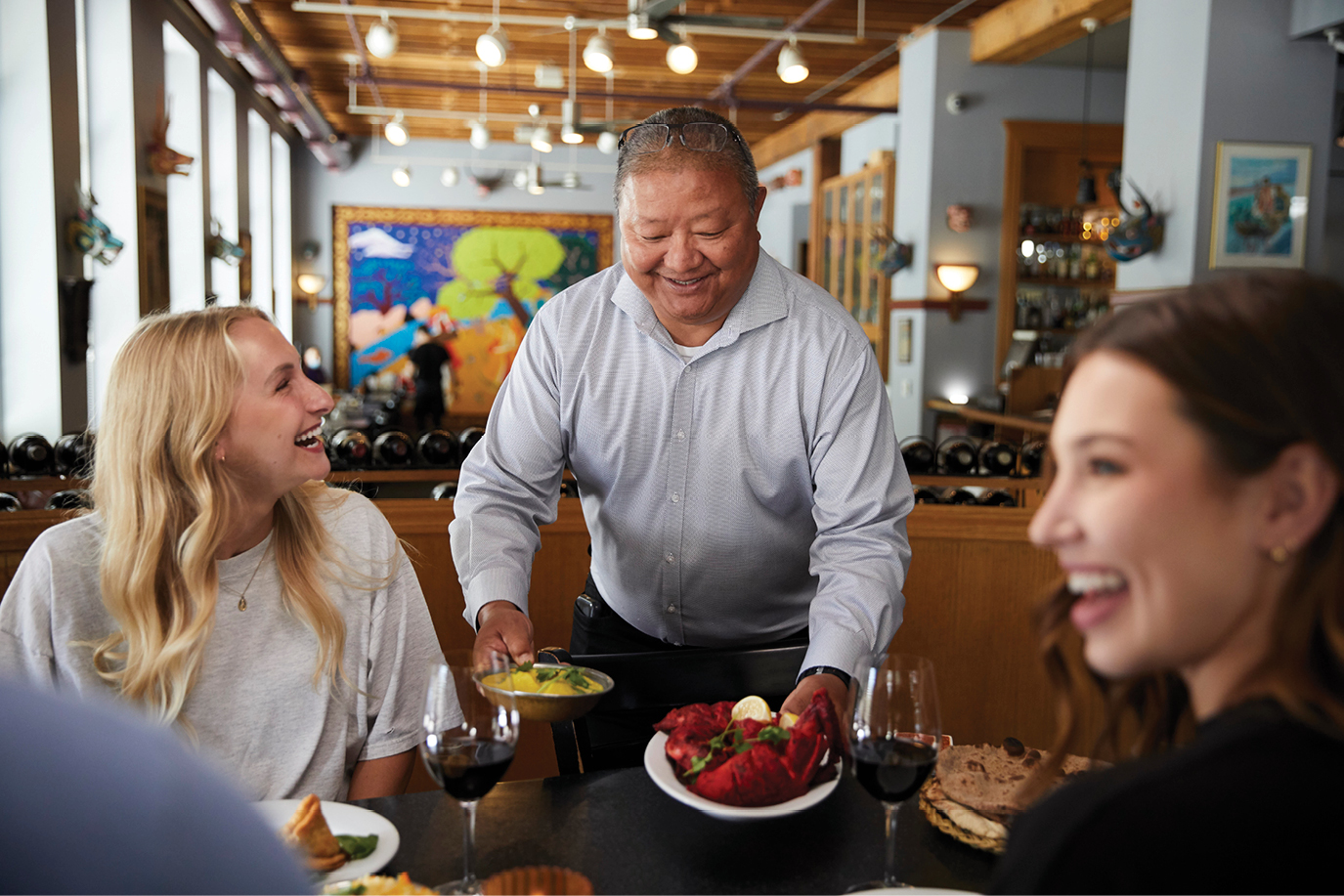 Living the good life in Nebraska.

These developments are occurring even as Nebraska experiences a new boom in agriculture-related projects. Earlier this year, Ag Processing announced it will build a major soybean processing plant in David City, located around 70 miles directly west of Omaha, with capacity to process more than 50 million bushels annually. Norfolk Crush announced plans to build a $375 million soybean crushing plant and process 38.5 million bushels annually near Norfolk in northeastern Nebraska; and Preferred Popcorn began production at a 123,000-sq.-ft. facility in Waco, located just north of I-80 west of state capital Lincoln.