The Cincinnati And Louisville Regions Tie for Top Honors 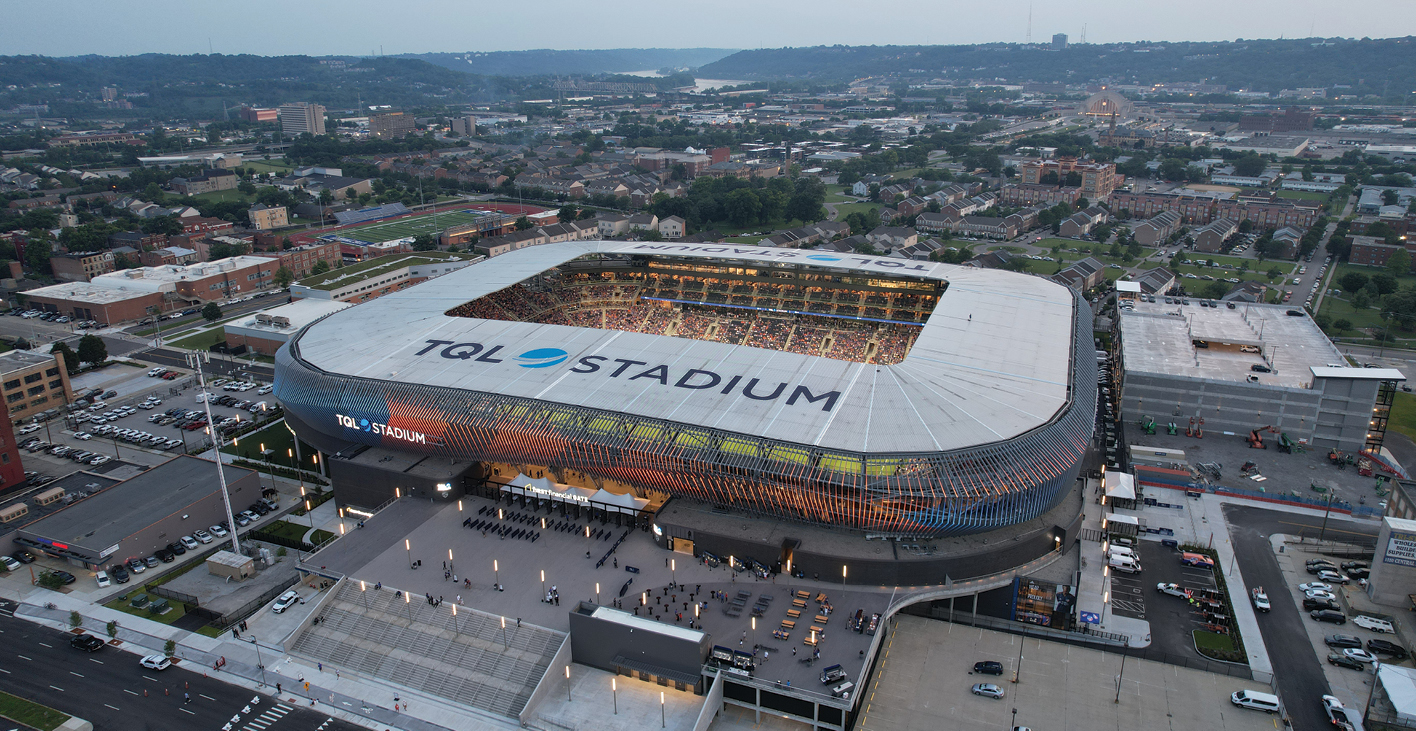 The winning ways of the Cincinnati region and Greater Louisville are exemplified by the performance of their respective professional soccer teams, both of which were in the playoffs in October.
Photo of Lynn Family Stadium (below) by Soccer Holdings courtesy of Louisville City FC; photo of TQL Stadium (above) courtesy of FC Cincinnati
by Adam Bruns
T

he Louisville and Cincinnati metro areas claimed a No. 1 ranking in Site Selection’s annual analysis of Ohio River metro-area economic development in 2020 and 2021, respectively. This year, after evaluating corporate facility investment projects, project capex and project job creation on both a cumulative and per-capita basis over an 18-month period ending in August 2022, we have an unprecedented result: a tie between the two regions. 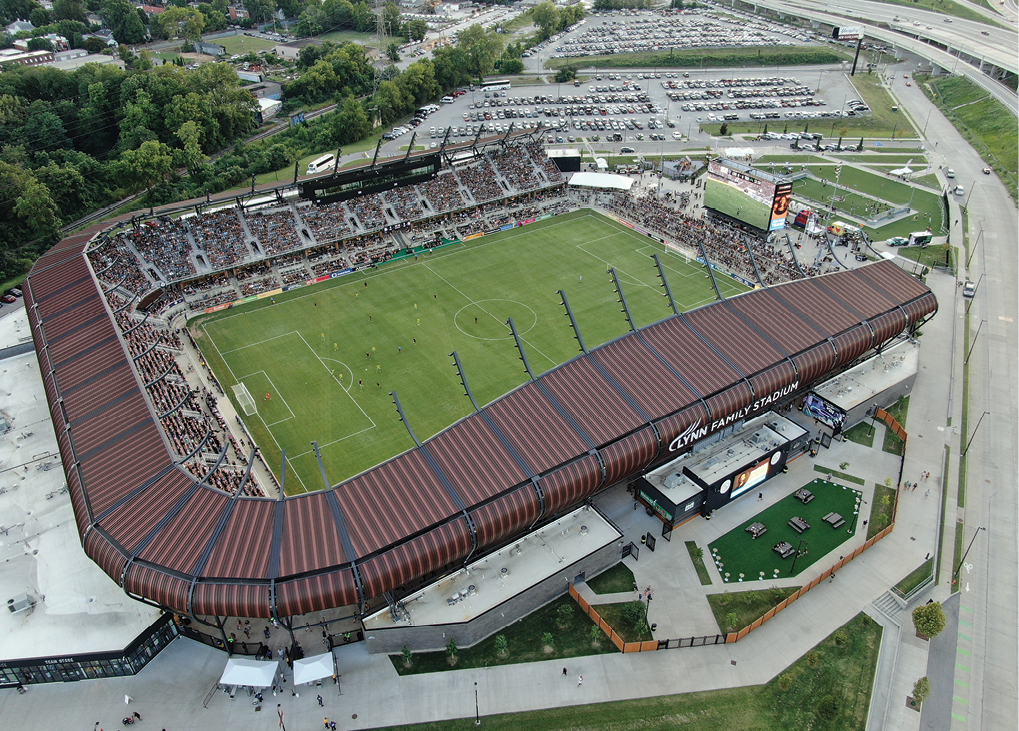 Both regions’ flagship cities boast playoff-bound men’s professional soccer teams founded in 2015: Louisville City FC plays in the USL Championship league and FC Cincinnati, which quickly moved up to the MLS level, as of press time was in the Eastern Conference semifinals. Site Selection EVP Ron Starner tells me he’d pay to see the Site Selection rankings tie settled in a grudge match between the two teams, who play in beautiful stadia separated by a mere 99-mile drive along the river. That’s not likely. But at least, being soccer clubs, they understand the merits of playing to a draw.

Among the projects drawn to Louisville most recently is Ford Motor Company’s September decision to invest $700 million and create 500 new hourly manufacturing jobs at its Kentucky Truck plant to support production of a new F-Series Super Duty pickup. That was enough to inspire Kentucky Governor Andy Beshear to declare September 27 “KenTRUCKy Day.”

“The partnership between Kentucky and Ford goes back more than a century and is only becoming stronger,” Gov. Beshear said. “Together with last year’s record-shattering electric vehicle battery plant announcement [the $5.8 billion, 1,500-acre BlueOval SK Battery Park manufacturing complex about an hour’s drive south along I-65 in Glendale], Ford is building its future here in the Commonwealth.”

“Advanced manufacturing continues to drive significant economic growth in Louisville,” said Louisville Mayor Greg Fischer. “Built upon a rich manufacturing history, Louisville has developed a strong foundation of support that allows us to meet manufacturers’ workforce and growth needs and has led manufacturing companies to invest more than $5.2 billion in our city and create more than 10,000 new jobs since 2014.” 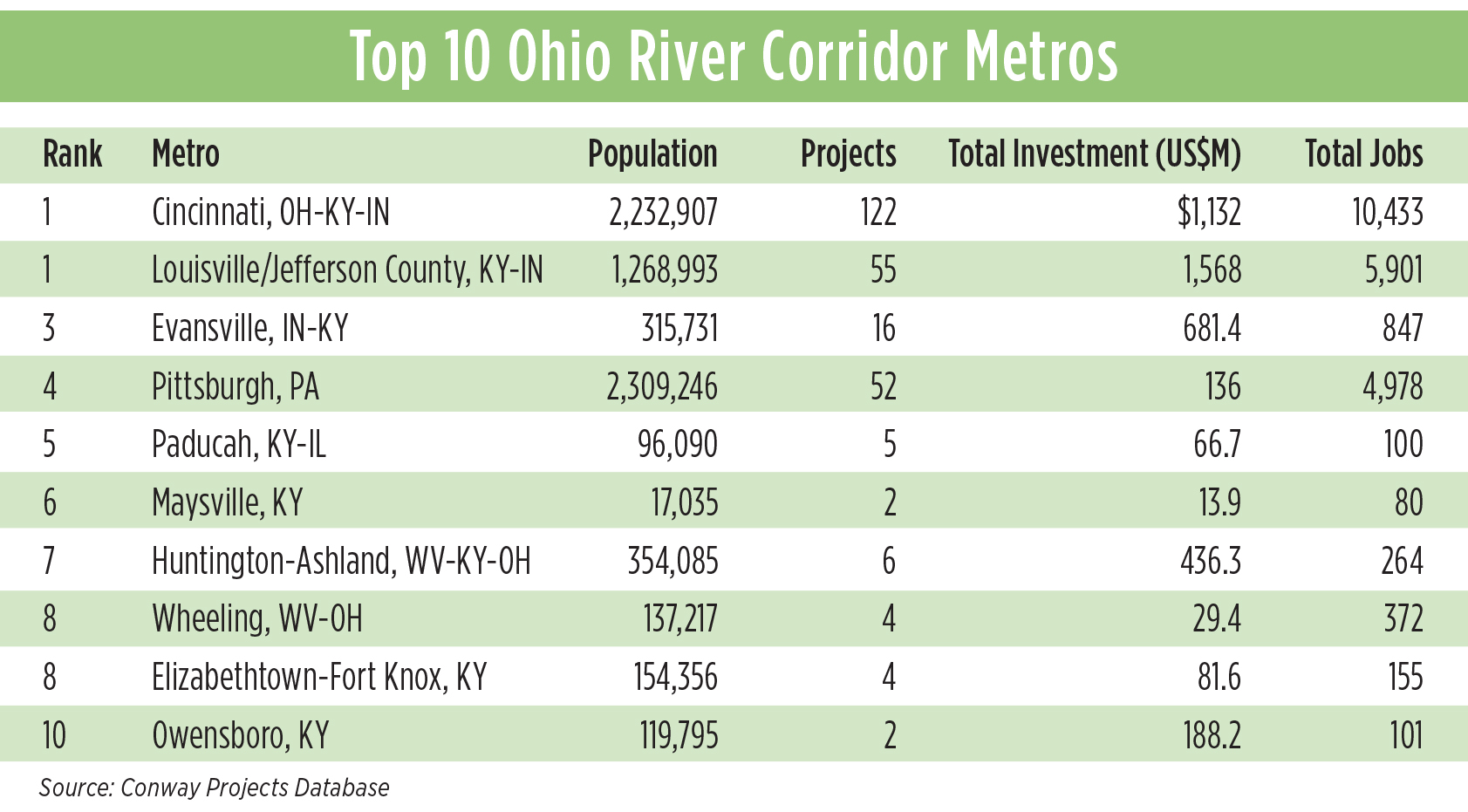 The Cincinnati region’s economic development success likewise runs parallel with its soccer team’s success on the pitch. The pitch for Cincinnati? Supreme talent resources, business ecosystem and logistics infrastructure at a fraction of coastal costs.

In the office sector, for example, Marcus & Millichap’s Q4 2022 market report anticipates 6,500 new jobs being created in the market, and notes rents, while trending upward, are still just $14.55 per sq. ft., compared to an average rent of $23.18 per sq. ft. across the national footprint of secondary markets that include such places as Austin, San Diego, Charlotte, Tampa-St. Pete and Minneapolis-St. Paul.

Among those investing in the city is the company whose name adorns FC Cincinnati’s stadium: Total Quality Logistics, helped in part by a robust business retention and expansion program at REDI Cincinnati, the region’s lead economic development organization, is investing $78 million in the region. Among other investors, GE Aviation Systems continues to invest at its site in Evendale, Ohio; 80 Acres Urban Agriculture is creating 125 jobs with a $74 million investment in Florence, Kentucky; Levi Strauss and aircraft MRO company FEAM are among many establishing operations in northern Kentucky; and Divisions Maintenance Group (DMG) is moving into a new headquarters at The Foundry in downtown Cincinnati, consolidating there from three buildings on both sides of the river.

Among three awards REDI Cincinnati received this fall from the Ohio Economic Development Association was recognition of an effort that played up precisely this region’s heartland value and values. And it had a sports angle associated with the American brand of football: On the occasion of the NFL’s AFC Championship game between the Cincinnati Bengals and the Kansas City Chiefs, REDI Cincinnati and the Kansas City Area Development Coalition ran a joint #RepTheMidwest digital campaign and placed a friendly wager to promote the strength and viability of the Cincinnati and Kansas City regions and drive donations to local charities focused on economic development initiatives. Local charities in the city of the winning team (the Bengals) received donations from both organizations.

“While the game between the Cincinnati Bengals and Kansas City Chiefs was a competitive affair, we wanted to present the vitality and robust ecosystems of our regions in a positive light, and that included highlighting the philanthropic nature ever present in both cities,” said Kimm Lauterbach, president and CEO, REDI Cincinnati.

It’s safe to say that, were there ever to be a friendly wager placed on a soccer match between the two cities of Cincinnati and Louisville, the same sort of economic vitality and philanthropic values would be on display.