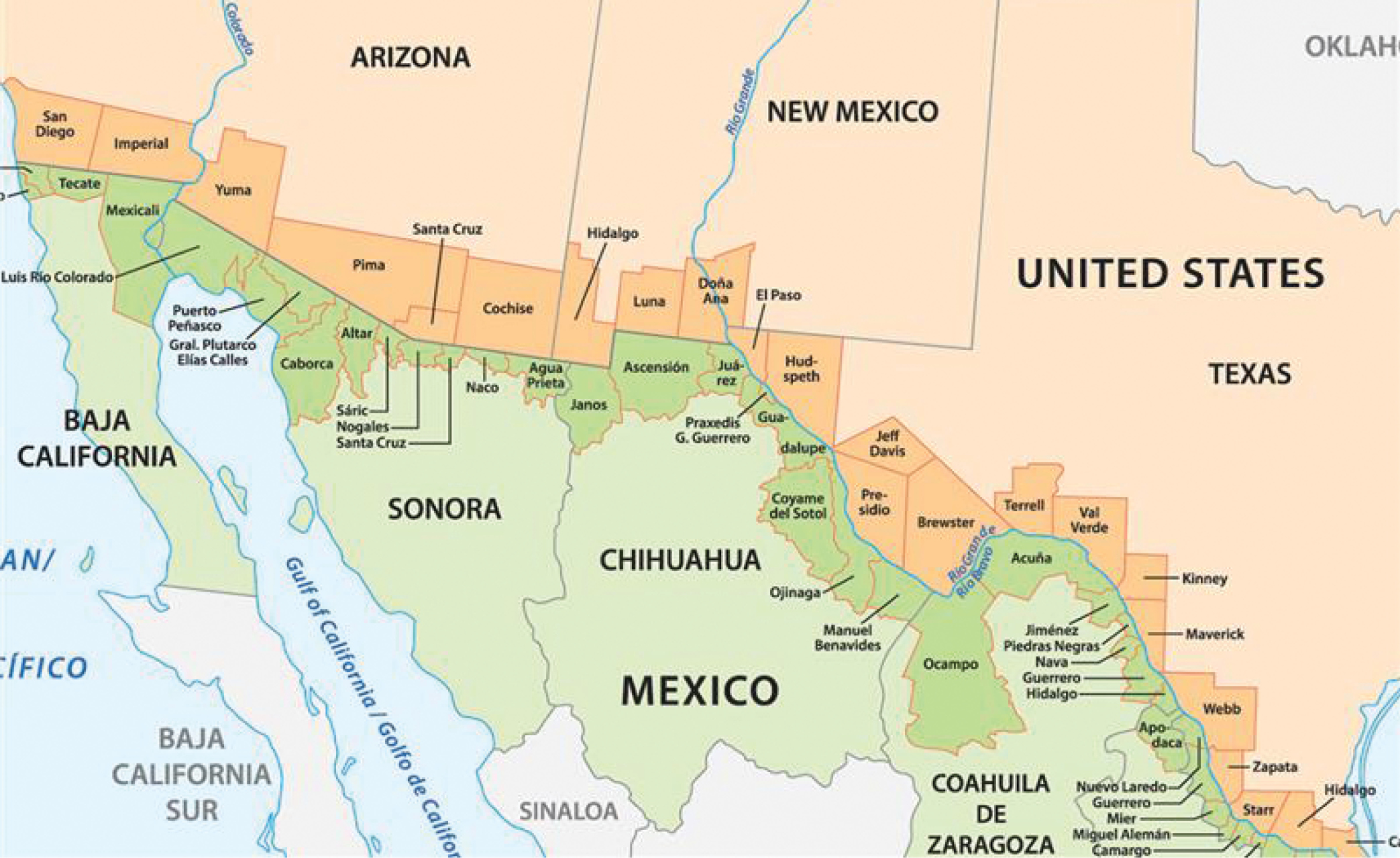 The Arizona-Sonora mega-region is ripe for investment attracted by the low risks of operating in USMCA territory.
Photo courtesy of U.S. Census Bureau
by Adam Bruns
F

or six decades the Arizona-Mexico Commission has worked “to strengthen Arizona’s ties to Mexico and build a cross-border community of professionals from nearly every industry from agriculture to medicine,” the organization states, with binational committees acting as industry and community advocates in partnership with the Comisión Sonora-Arizona.

“Arizona knows firsthand the value of strong international relationships in an increasingly connected global economy and society. And our shared border with Mexico offers Arizona the opportunity to work across international lines to achieve shared goals, and offer a unique region primed for international investment,” the AMC continues.

In September, fresh from discussing new data and insights with a crowd of 250 people at their event “The State of AZ-MX Trade,” Jessica Pacheco, president of the Arizona-Mexico Commission Board of Directors, and Luis Ramirez Thomas, president of Ramirez Advisors Inter-National, spoke with me by videoconference. I asked them first about the refashioned NAFTA agreement called the USMCA, which the Greater Phoenix Economic Council has called” a mutually beneficial win for North American workers, farmers, ranchers and businesses” that creates “more balanced, reciprocal trade supporting high-paying jobs for Americans and grows the North American economy.”

“Within the framework of the USMCA, we are seeing a tremendous — and not a surprise — renaissance of manufacturing in our hemisphere at all levels,” he said. “Not just manufacturing, but anything that relies on a supply chain, is looking at participating in the U.S.-Mexico-Canada region. We are hearing that because of logistics and uncertainty and challenges in the U.S.-China relationship, as well as the ongoing threat of a pandemic and the impacts that has in China with the zero-COVID policy, many U.S. companies that have operations in China are looking at shortening supply chains and locating in the USMCA framework. We are also hearing from Chinese companies who want to sell high value and low volume into North America. Mexico appears to be one of the biggest beneficiaries of that.” 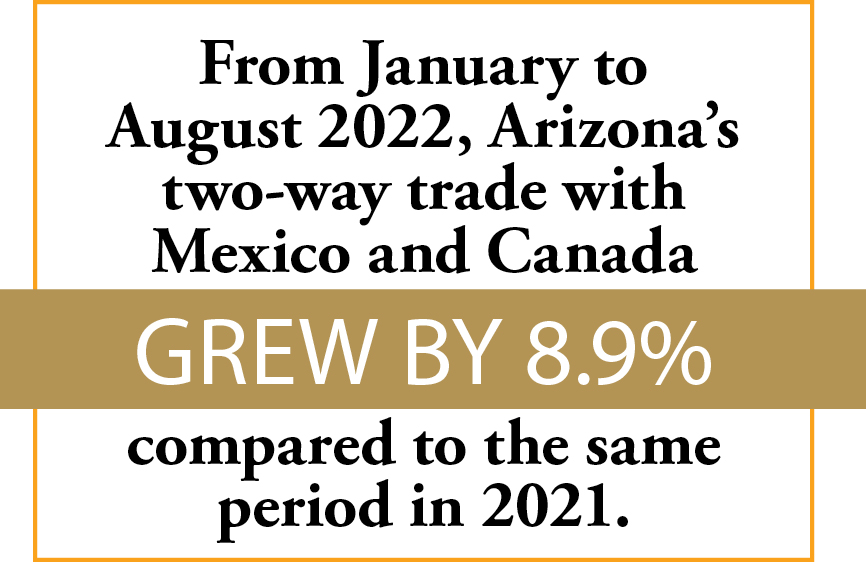 As for Greater Phoenix, he says, “we are seeing tremendous interest in very high-tech levels of manufacturing, with Taiwan Semiconductor Manufacturing Company and Intel alone and the first- to fourth-tier vendors that are coming to this region.” Moreover, led by Nikola in truck manufacturing and Lucid with cars, a cluster of electric and autonomous vehicle expertise is building. Ramirez Thomas says a number of Taiwanese and Korean manufacturers are coming into the area. “For their cost structures, Arizona may not offer what they need, and they want to keep manufacturing in Taiwan or South Korea. We say, ‘Listen, look at the mega-region, look at Sonora and look at your overall cost structure if you incorporate Mexico.’ If these companies decide to go back to Taiwan, we’ll get $1 to $3 of money spent. If that investment goes to Mexico, upwards of 40% of every dollar spent comes back to the U.S. We also get the job creation right across the border, people spending money, coming over and shopping, If they locate in Sonora or Arizona, supply chains for those vendors themselves can be developed in the region.”

Ramirez Thomas and Pacheco are also very engaged in advocating for infrastructure investment. “You can talk about supply chain all you want,” said Ramirez Thomas, “but if you don’t have the infrastructure for mobility, what have you gained? We are focused on road infrastructure and our port of entry infrastructure that connects us with Mexico, and also the inspection process — if I have a factory in Hermosillo, but I’m stuck at the border for hours, I don’t really gain a lot. We’re looking at infrastructure so once you get to the border you can cross in 30 minutes or less.”

Jessica Pacheco, president of the Arizona-Mexico Commission Board of Directors

Jessica Pacheco says as sophisticated companies with a global presence are looking at cost structures today, “the concept of risk is being evaluated in a new way because of what we went through with the pandemic, and the impact of the Ukraine-Russia conflict. As they look at the USMCA footprint from a risk standpoint, it is significantly more attractive than other regions of the world” where uncertainty and populist governments don’t seem to be going away anytime soon.

What is building in the Arizona-Mexico mega-region is a mindset geared toward innovation and entrepreneurism. Pacheco says as people come to Arizona or Sonora, the Arizona-Mexico Commission has identified pain points and put policies in place to relieve them. She highlights a new binational recruiting app created by leaders in the Yuma region so that people can upload their resumes and be immediately available to meet company needs. 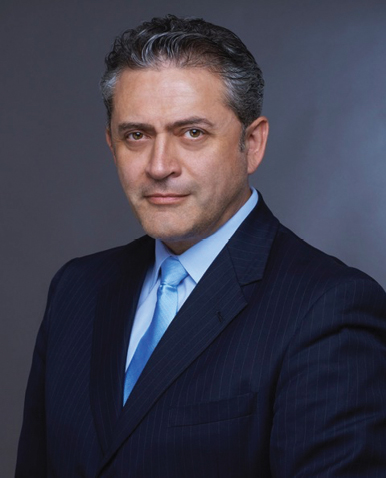 Ramirez Thomas mentions a company now manufacturing in China but looking at Mexico. One challenge, he says, is the shelter operators on the Mexico side who normally see one or two prospects a month are now working with 10 to 15 prospects a month. Whether it’s Coahuila, Nuevo Leon or Baja California, he says, “before you’d have spec manufacturing available, and now there is nothing available. Cities have two or three buildings. We took a client across from Douglas on the border, and they said, ‘If you don’t want the building, we have someone coming in next week.’ Jessica led a delegation to Sonora a few weeks ago, and they are looking at the development of ready-to-go industrial parks, and making sure they have the necessary infrastructure. They want answers today. So the investment next year is ready.”

Pacheco says the business climate in Sonora is “just tremendous,” especially under the leadership of a new governor. “They have been responsive, engaging, and when we speak about our issues, it’s a real conversation around policies and solutions. If Luis were to have a company that needed specific spec space, they could be on the ground tomorrow meeting with all the folks they need to meet with to move immediately.”

Asked for further examples of cross-border opportunities being seized, Ramirez Thomas says there are plenty to choose from. “Some are obvious and some are not,” he says. “Governor Ducey challenged the Arizona Department of Transportation on the safety inspection process, which was taking one to two hours. Companies were complaining that is money being lost. So ADOT created an entire new unit called the Border Liaison Unit which trains Mexican truck drivers on how to comply with U.S. safety regulations. We’re also using WhatsApp so the driver can take a picture of, say, a cracked light and see if it will pass inspection or not. Out-of-service orders have dropped by 80% ... It has a tremendous impact on our supply chain and the ability to move cargo through.”

Ultimately it comes down to partnership and communication. The Greater Phoenix Economic Council, Arizona Commerce Authority, Arizona Office of Tourism, city and county leaders, the League of Arizona Cities and Towns, Arizona’s three universities and their counterparts across the border, groups such as the I-11 Coalition and the ports authorities at each commercial border crossing location — all have a stake in what USMCA can bring to this particular region of the Americas.

“We want to enhance the relationship,” says Pacheco. “It’s good for our country and the USMCA. This is a true opportunity for North America we should all be leaning into.”