Where New Drone Missions Are Being Devised 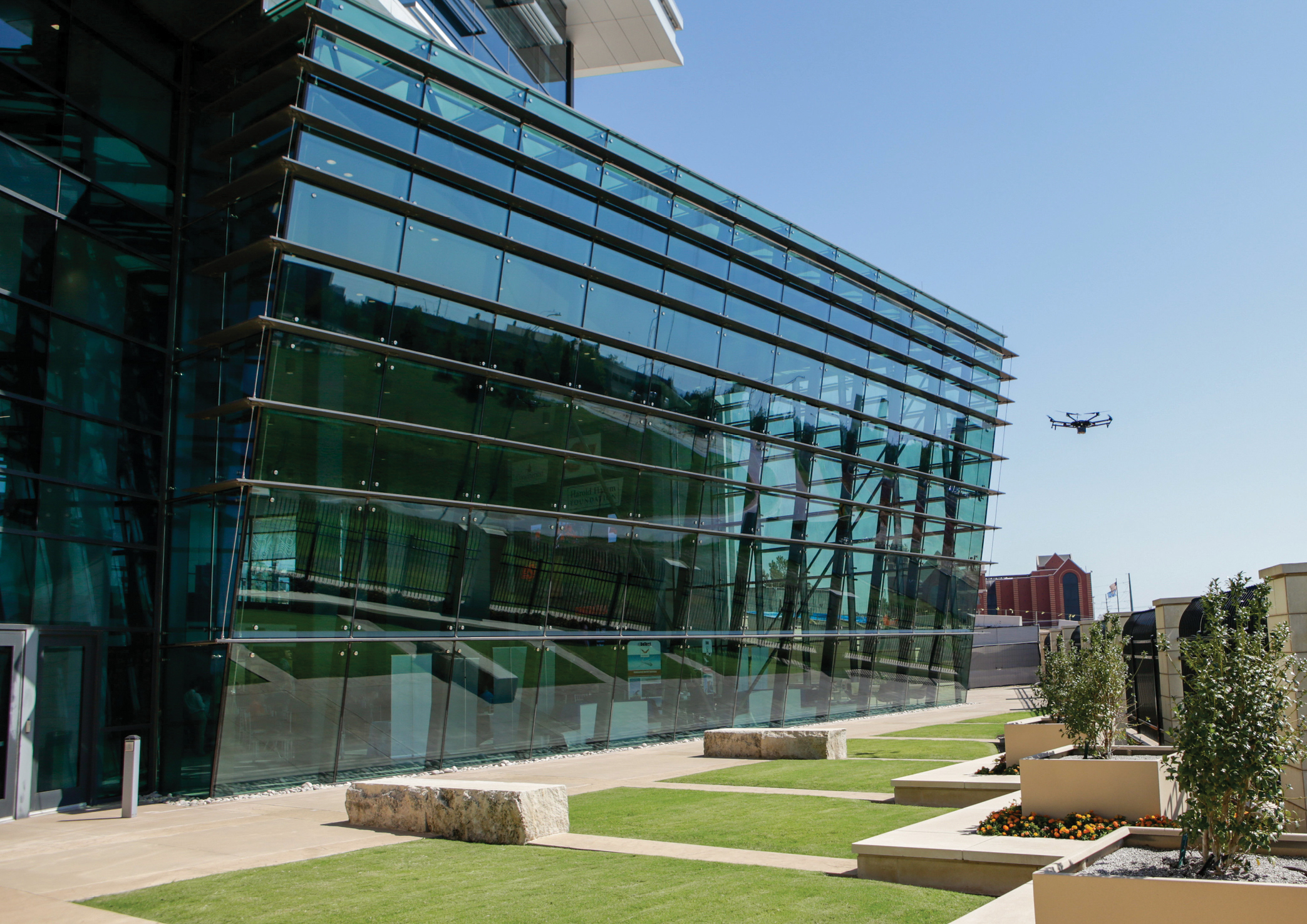 uch of Ukraine’s success in repelling Russian forces from territory they occupied in recent months can be attributed to commercial drones. More than mere reconnaissance tools, unmanned aircraft have been remarkably effective at eliminating tanks, troop transports and other equipment by dropping ordnance on them and taking them out of commission. It may not be the first time this tactic has been used on the battlefield, but it likely is the first time on a scale that is arguably helping turn the tide of a major military conflict.

In that vein, work is beginning at the Oklahoma Aerospace Institute for Research and Education (OAIRE) at Oklahoma State University to develop ways to counteract malicious drones and other unmanned aerial systems (UAS). OAIRE launched a Counter-UAS Center of Excellence in September and a new partnership with the U.S. Department of Homeland Security aimed at strengthening national defense in this arena. According to OSU, the agreement includes receiving a $15 million Indefinite Delivery, Indefinite Quantity (IDIQ) subcontract from defense contractor Amentum to help the U.S. Department of Homeland Security develop technology to counter threats from drones and other UAS at the Counter-UAS Center of Excellence.

“By working together, we are setting the national standard for counter-UAS. The possibilities for the future of aerospace at OSU in Oklahoma and for the United States are far reaching, and it’s all built on a bedrock constructed from decades of experience.”

— Kayse Shrum, OSU President, at the Center of Excellence announcement

“By working together, we are setting the national standard for counter-UAS,” said OSU President Kayse Shrum at the Center of Excellence announcement. “The possibilities for the future of aerospace at OSU in Oklahoma and for the United States are far reaching, and it’s all built on a bedrock constructed from decades of experience. This center will change what’s possible with national security. It will advance research and strengthen the Oklahoma economy as we merge civilian and military worlds into a partnership that will exponentially improve the mission of both.”

The Counter-UAS Center of Excellence is an arm of OSU’s Unmanned Systems Research Institute (USRI) directed by Dr. Jamey Jacob, who also was named director of OAIRE. “The Oklahoma aviation aerospace industry has $44 billion of annual economic activity and is the second largest industry in the state behind energy,” he noted at the September event. “With the advent of the new advanced air mobility industry, Oklahoma has an opportunity to leverage its expertise in aerospace and autonomous systems to lead in the newest and fastest growing field of aviation and secure a global impact throughout the 21st century.”

Earlier in September, OAIRE received two federal grants to expand its reach and impact in the development of Advanced Air Mobility (AAM). The U.S. Economic Development Administration grants are part of a $38.2 million award to the Tulsa Regional Advanced Mobility (TRAM) Corridor to create a hub for research, development and production in the burgeoning field of advanced mobility — the next intersection point between the aerospace industry and intelligence, according to OSU.

The funding will be used to create the LaunchPad Center of Advanced Air Mobility at the Helmerich Research Center on the OSU-Tulsa campus and support ongoing research activities at OSU, such as the NASA University Leadership Initiative led by OSU and the recent agreement between the state governments of Oklahoma and Arkansas to develop Advanced Mobility pilot programs across the border. The new center will focus on research and development of drone technology and urban air mobility — aka urban air taxis. The funding also will be used in the related development of flight test capabilities, and OSU researchers will work with the Osage Nation and its SkyWay36 Droneport northwest of downtown Tulsa.

Also in September, RapidFlight, a Virginia-founded integrated designer and manufacturer of unmanned aircraft, announced it will invest $5.5 million to establish operations in Manassas, creating 119 new jobs. The company’s 25,000-sq.-ft. facility will house its headquarters and design and production operations.

“Virginia is an important state, providing unique access to decision makers, a world-class workforce, unmanned test infrastructure and an advanced materials industry. Thanks to its central location on the East Coast, we can readily work face-to-face with our government customers while also leveraging Virginia’s Unmanned Systems’ infrastructure to conduct operations and test our systems, rapidly delivering new capabilities to our nation.”

“Virginia is an important state, providing unique access to decision makers, a world-class workforce, unmanned test infrastructure and an advanced materials industry,” said Jay Gundlach, Ph.D., RapidFlight’s CEO, at the project announcement. “Thanks to its central location on the East Coast, we can readily work face-to-face with our government customers while also leveraging Virginia’s Unmanned Systems’ infrastructure to conduct operations and test our systems, rapidly delivering new capabilities to our nation.”

DroneUp also plans to establish three drone hubs at Walmart locations in the Commonwealth this year. DroneUp recently announced a multi-year commercial services agreement with Walmart, Inc. to provide drone delivery services at 34 sites, providing the potential to reach 4 million U.S. households by the end of the year. Walmart has a minority stake in DroneUp and a seat on its board and in turn, DroneUp is the exclusive provider of drone services for Walmart.

DroneUp founder and CEO Tom Walker at the announcement of the investments: “The team at DroneUp couldn’t be happier with the support we’ve received from Governor Youngkin’s office and the Commonwealth of Virginia as a whole over the years. Virginia is our home, and we are proud to be able to continue to bring new innovation, talent and economic opportunities to our great state. This investment and expansion will not only bring new career opportunities to our region, but also allow us to tap into the brightest minds around Unmanned Aircraft System development and design.” 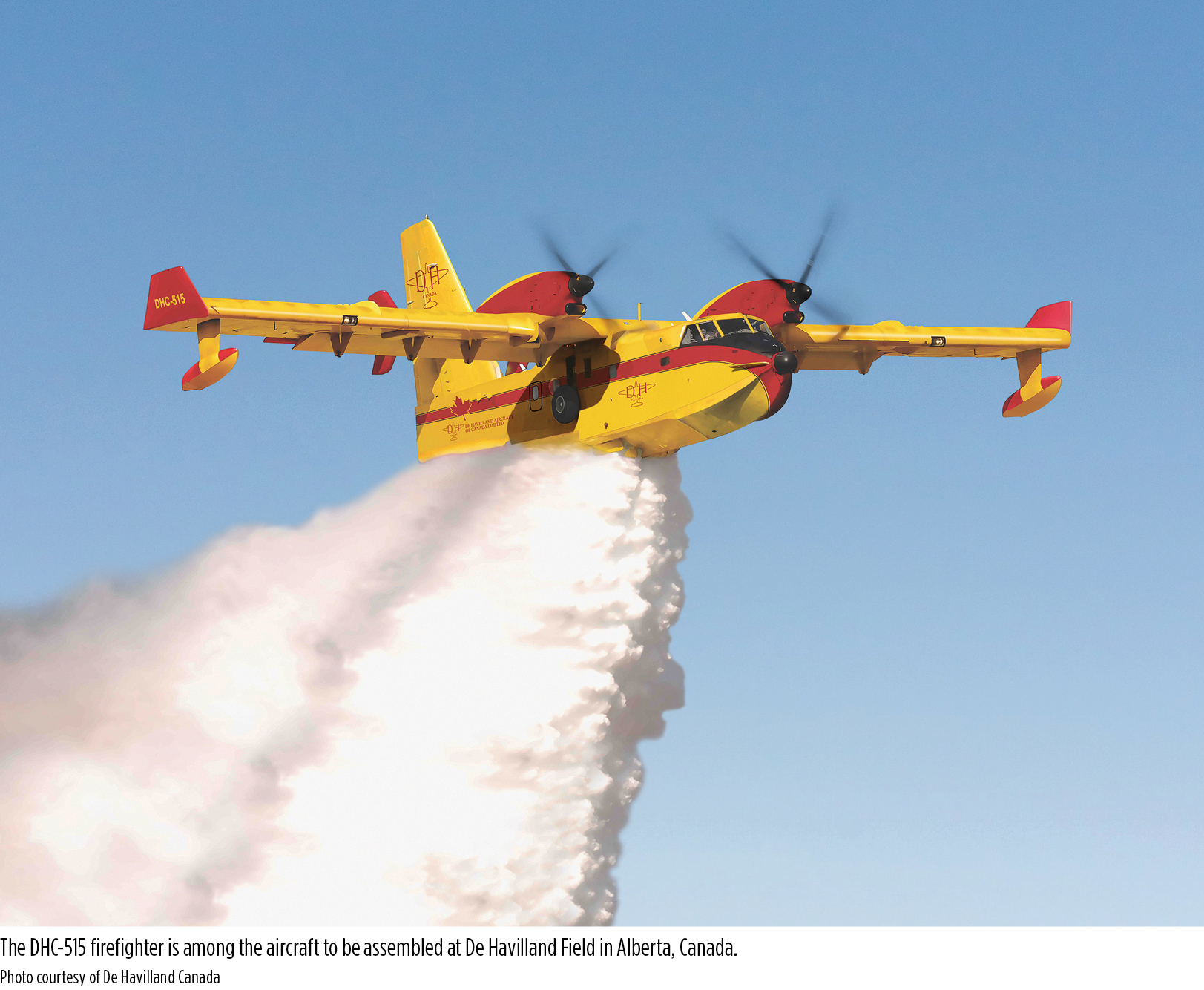 De Havilland Canada has picked Wheatland County, in south central Alberta as the location for the 1,500-acre De Havilland Field. The site will consist of a state-of-the-art aircraft assembly facility, runway, parts manufacturing and distribution centers, and a maintenance, repair and overhaul center. It also will have educational space for training, office space and a De Havilland aircraft museum.

De Havilland Field is where final assembly for the DHC-515 firefighter aircraft, launched earlier this year, the DHC-6 Twin Otter and the Dash 8-400 aircraft will take place, the latter if it is brought back into production. Construction is expected to begin in early 2024 and is estimated to create several hundred construction jobs. The company expects to create up to 1,500 jobs at De Havilland Field with potentially more based on the growth of the company.

“De Havilland Field will be the home of assembly and production of reliable and rugged Canadian aircraft that serve missions around the world,” said Brian Chafe, president and CEO, De Havilland Aircraft of Canada Limited, in a statement. “This is the start of a new chapter for both De Havilland Canada and Canadian aerospace. We are excited about beginning the process with Wheatland County to provide new aviation opportunities for Canada and Alberta.”