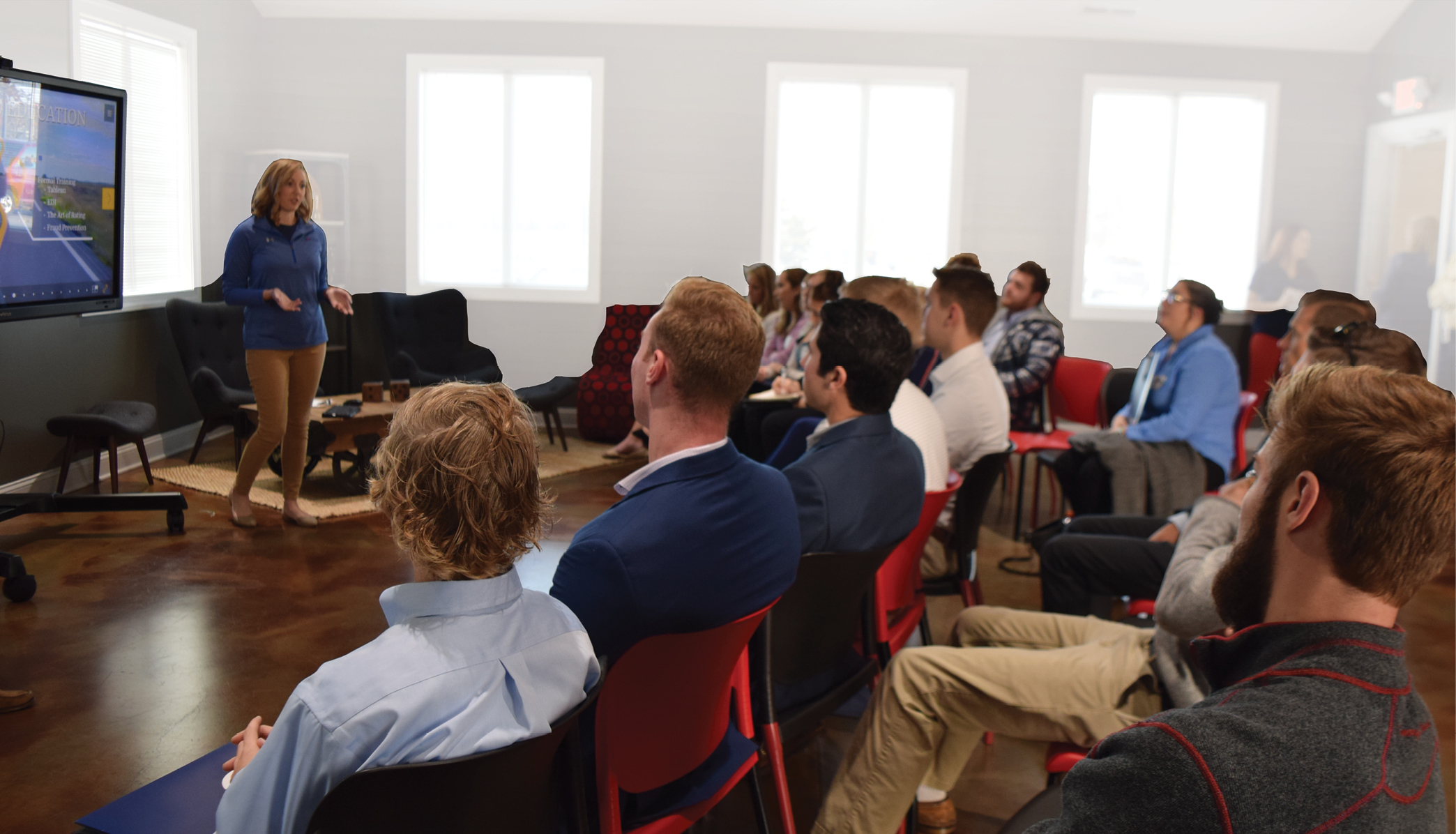 In-house training at Choptank, a 3PL in Preston, Maryland
Courtesy: Choptank
by GARY DAUGHTERS
I

ndustrial developer Brent Miles recalls how he arrived, riding a hunch, to a get-acquainted meeting with local officials in Hagerstown, Maryland. Miles, founding partner and chief marketing officer of Kansas City-based NorthPoint Development, was looking to extend his company’s warehousing footprint southward out of Pennsylvania along the bustling Interstate 81 transport corridor.

“We had been invested in Pennsylvania for a really long time,” says Miles, “but we had heard that maybe Maryland wasn’t really open for business. That’s something that piqued our interest and we wanted to find out for ourselves.”

As Miles relates now several years later, his nascent doubts about that scuttlebutt proved to be providential. At a local government office building, he was greeted by dozens of local representatives eager to get a project moving.

“We usually come to a meeting like this,” Miles tells Site Selection, “and there’s maybe the mayor and a city council member or two. This was totally different. I’d never seen anything like it.”

Today, more than 1,400 people work at NorthPoint’s sprawling 2.2 million-sq-ft. Hagerstown Logistics Center, and NorthPoint has begun to push dirt around a second, two-building project in surrounding Washington County. The company’s Harbor Logistics Center, a 96-acre last-mile facility, is inking tenants as it rounds into shape in Baltimore’s Curtis Bay. All of which means that NorthPoint, the country’s largest privately-owned industrial landlord, has quickly amassed more than 4.7 million sq. ft. of warehouse space — either built or under construction — within the state of Maryland.

That’s an overnight drive to one-third of the U.S. population, a big part of which is accessible via the I-81 corridor running northeast out of Hagerstown.

“The I-95 corridor,” says Miles, “has been developed. The I-81 corridor is more accessible than I-95, and Hagerstown is a really great location.”

That initial meeting with local development officials, Miles believes, proved to be the harbinger of what he now sees as a uniquely cooperative relationship that continues to pay dividends for NorthPoint and for Maryland.

“Sometimes,” he says, “that first date can go really well, but then you get down into the cogs of government and you can’t get a permit, or there are other issues. We have never had that in Maryland. We would not be investing several hundred million dollars into Maryland if we’d somehow had a bad experience. But our experience thus far has been unmatched.”

With its primary location in the tiny town of Preston on Maryland’s Delmarva Peninsula, 3PL logistics provider Choptank might easily fly under the radar. But the 22-year-old transport broker clearly caught the eye of Illinois-based Hub Group, which recognized Choptank’s impressive growth as a provider of refrigerated transport services and purchased the homegrown Maryland company for $130 million last October.

A prime selling point was Choptank’s suite of proprietary technology tools, which speed the flow of goods among its roster of customers and its network of more than 20,000 carriers. One such tool provides real-time pricing to customers booking short-term contracts whose rates can fluctuate significantly.

“Smart customers,” says Executive Vice President Steve Covey, “want a rate instantly. What we have developed are technologies that, through the use of bots and other AI tools, will automatically send rates over. Speed and accuracy,” he says, “are critical.”

Covey, like CEO Geoff Turner, hails from Preston. Josh Bergling, vice president for technology, is a graduate of nearby Salisbury University. Of Choptank’s 400 employees, the vast majority work either at the company’s main office in Preston or at a newly opened facility in Easton, about 10 miles west. Ties to the local community, Covey believes, have been crucial to its success.

“It’s been a great experience,” he says, “watching this small company from Preston grow by leaps and bounds and be a major player in food logistics worldwide.”

By Air and By Sea

Through a host of aggressive investments, the sprawling Port of Baltimore — farther inland than any other along the East Coast — is a major player in its own right, boosting its profile as one of the fastest-growing ports on the East Coast. Already the nation’s top handler of roll-on/roll-off cargo such as cars and trucks, tractors and combines, Port of Baltimore is an increasingly fierce competitor for containerized cargo bound for markets in the Midwest.

“International shipping is extremely competitive,” Maryland Port Administration Executive Director William Doyle tells Site Selection. “And it is mission critical that we keep investing in infrastructure to grow our business and generate jobs.”

That means, Doyle says, capital expenditures such as a $466 million project that will enhance the Howard Street Tunnel through Baltimore to accommodate double-stack trains and thus increase the port’s volume by an estimated 160,000 containers per year. It’s one of the biggest public-private construction partnerships in Maryland history and a “game changer,” says Gov. Larry Hogan.

It also means adding additional ultra-large cranes like the four that arrived late last year that stretch to 450 ft. tall and weigh more than 1,700 tons. They serve to leverage Port of Baltimore’s 50-foot-deep berths, which make it one of the few along the East Coast that can accommodate super-sized Neo-Panamax container ships.

Baltimore/Washington International Thurgood Marshall Airport (BWI), like the port, is a powerful economic driver that’s committed to expansion. Just a few years removed from building a 200,000-sq.-ft. processing facility for Amazon, BWI recently unveiled its new Concourse A/B, the largest development project in the facility’s history, part of a five-year, $1.8 billion capital campaign. Under construction now is a $135 million maintenance facility for Southwest Airlines, whose Baltimore operation is one of its biggest.

As the busiest of a regional trio that includes Dulles International and Reagan International airports, BWI accounts for more than 106,000 jobs and an annual economic impact of some $9 billion, according to Ricky Smith, BWI’s executive director and CEO.

“Many of the companies that have decided to make Maryland their home wouldn’t be here without BWI Marshall,” Smith tells Site Selection. “And those that are here wouldn’t stay. BWI gives them the access to the country and the world that they need to succeed.”