IDAHO HITS ON A BIG ONE AND LOOKS FOR MORE 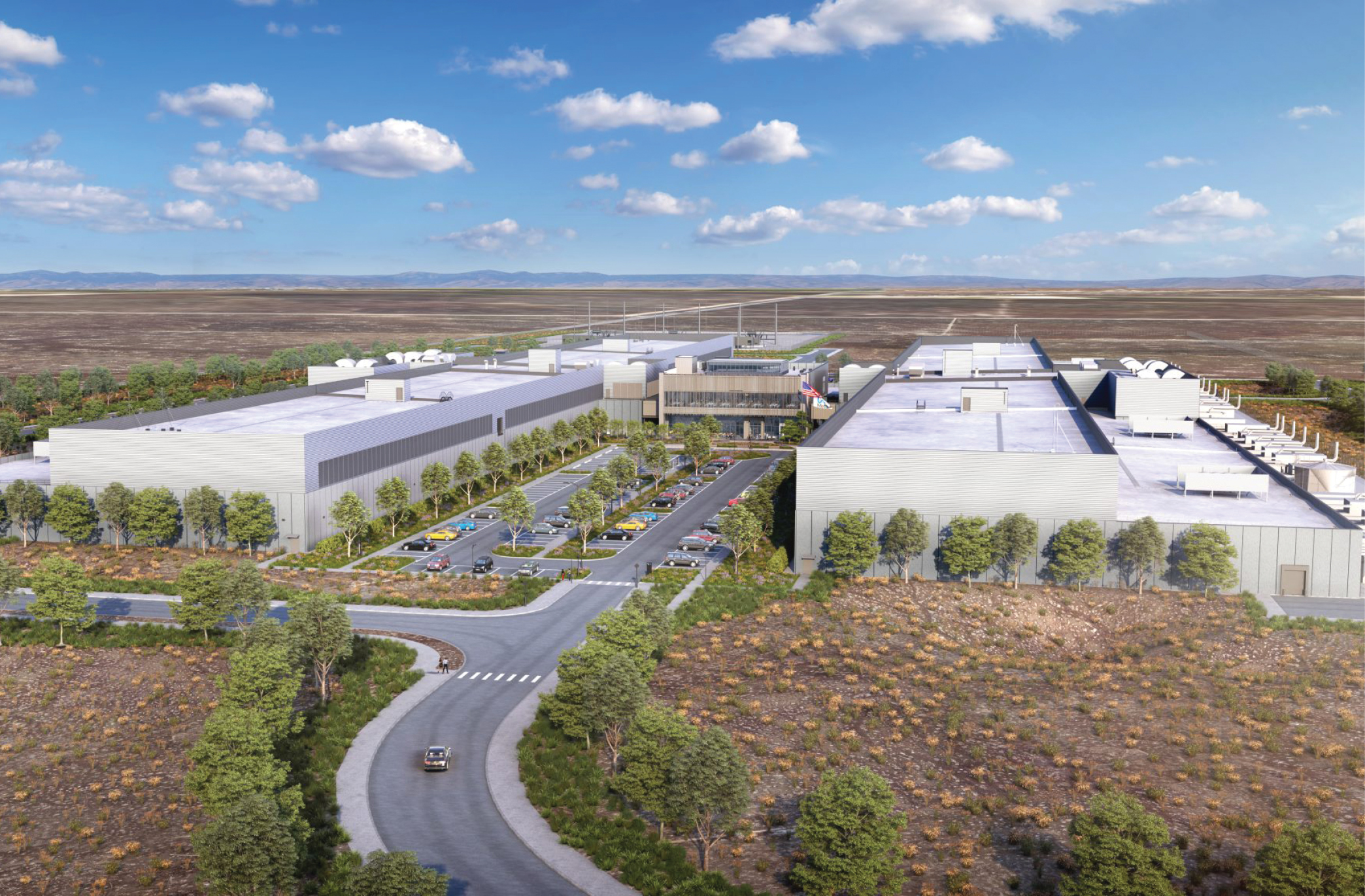 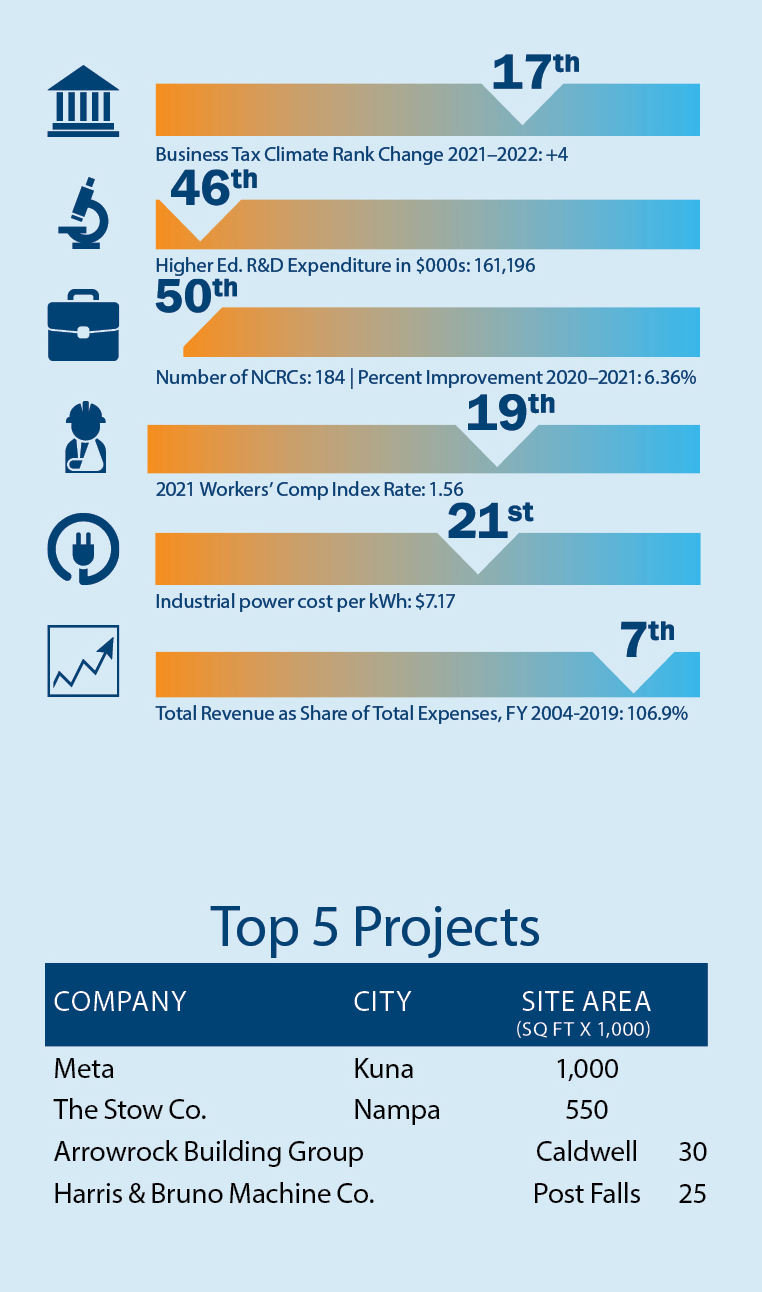 eta’s announced plan for an $800 million data center southwest of Boise represents the biggest dollar investment in Idaho since at least as far back as 2015, according to information gleaned from Site Selection’s Conway Projects Database.

The 960,000-sq.-ft. facility slated for the growing Boise suburb of Kuna is the first data center project agreed to in the state since Idaho, in 2020, joined about half of all other U.S. states in adopting tax incentives conceived strictly to lure data centers. Idaho’s package, like those of a number of states, offers sales tax exemptions on server equipment and materials used in construction.

“We are thrilled to be breaking ground on our newest data center in Kuna, Idaho. Thank you to all of our partners who helped us move this project forward,” said Darcy Nothnagle, director of community and economic development at Meta,” in a statement. “Kuna is a great place to call home and we are committed to investing in the community’s long-term vitality. We look forward to having a strong, fruitful partnership for years to come.”

Meta has 10 operational data centers in the U.S., and the Kuna facility is one of another seven under development, according to datacenterknowledge.com. All Meta data centers are to be supported by 100% renewable energy and all have been certified or aim to be certified as LEED-Gold or higher by the U.S. Green Building Council.

Meta is expected to anchor the city’s emerging East Kuna Industrial Area. In 2020, the city annexed some 400 acres of farmland for a mix of light and heavy industrial development. Officials say the parcel has nearby rail and freeway access.

For its part, Meta is to invest some $50 million in a new water and sewer system, which the City of Kuna will own and operate. The system will provide increased capacity for new users and new businesses the city hopes the data center will help to attract.

The confluence of federal and state supports for semiconductors unleashed a wave of speculation that Boise-based Micron might include Idaho among its publicly stated plans for a new semiconductor fabrication plant or plants. Founded and headquartered in Boise, the computer data and memory storage company employs 6,000 workers in the Boise area and is Idaho’s largest for-profit employer. Commerce Secretary Gina Raimondo, in a July 18 availability with Idaho reporters, confirmed that Micron was considering Boise as the site for a semiconductor facility contingent upon passage of the CHIPS Act, which followed three weeks later.

In an August 8 interview, Micron Senior Vice President and General Counsel Rob Beard told Boisedev.com that with the federal legislation in place, the company hoped to solidify its expansion decisions soon, refusing to either confirm or deny whether Idaho might be the place. (In early September, the company confirmed a $15 billion investment in Boise. -Ed.)

And Another Big Tech Mystery

Mystery is swirling as well around a rumored Amazon project. Idaho Falls-based Ball Ventures has been silent for months regarding a warehouse planned in joint venture with Salt Lake City-based Gardner Batt at Ball’s Pleasant Valley Business Park. Announced in August 2021, the 520-acre mixed-use development south of Boise Airport is to offer, the announcement statement read, “a diverse mix of complementary commercial uses,” such as office and retail.

“The developers aren’t saying,” reported the Idaho Statesman in December, “but the warehouse appears to be an Amazon project. It even has a code name, Project Dove, just like Amazon.”

Of course, many non-Amazon projects have code names too. But BoiseDev reported that Gardner Batt “developed several Amazon facilities in Utah. The project uses the same architect Amazon used for other local projects, AO Architects.” BoiseDev also noted that the planned warehouse has a design and color scheme identical to other Amazon facilities.

Amazon in 2020 opened a 650,000-sq.-ft. fulfillment center in Nampa, just west of Boise. Last November, the Boise City Council approved an agreement to lease 150,000 sq. ft. near the airport for Amazon to build a 35,000-sq.ft. cargo facility. Amazon is to pay the airport rent and also is to fund an access road, taxiway and ramp to connect to the airfield.