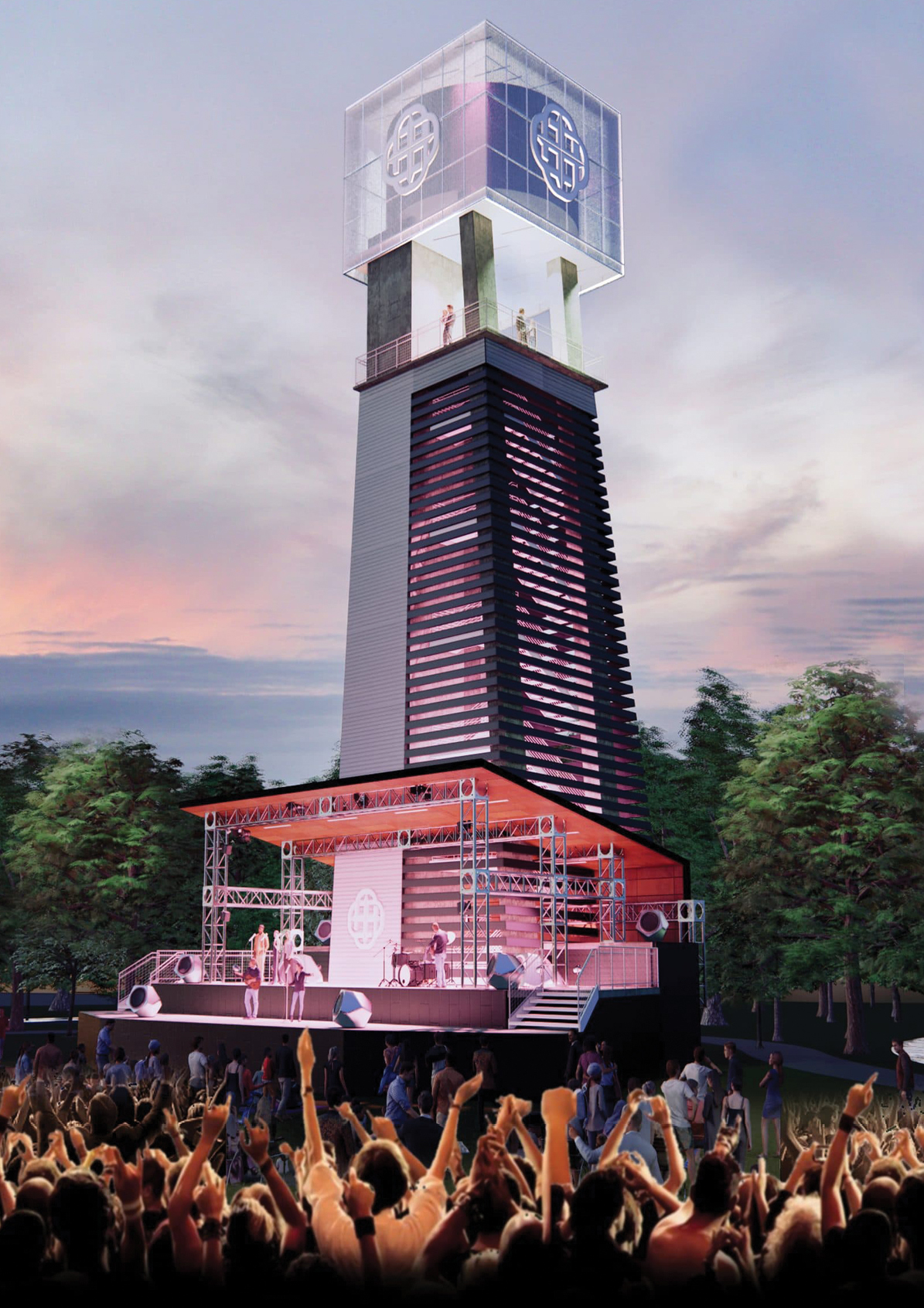 The team behind The Crossroads envisions a magnetic mixed-use development for talent and employers alike, including much-needed housing options, green space, amenities, events and child-care.
Renderings courtesy of The Crossroads of Northwest Ohio
by ADAM BRUNS
I

n his time growing up in Utah, attending medical school in New York City, serving residencies and traveling the nation as a leader in the Association of American Medical Colleges, Dr. Craig Nicholson has seen a lot of places. The place he’s chosen to make a life and improve others’ lives is West Central Ohio.

The medical director of the Urology Service Line and the director of the Robotic and Minimally Invasive Surgery program for the Kettering Health Network, the busy surgeon might do a dozen or more surgeries a day. He also has likely taught robotic surgery to more surgeons (200-plus) in the nation than anyone. Now he’s bringing his energy (and some of his retirement) to a novel mixed-use development project called The Crossroads of Northwest Ohio, located at Exit 118 in Cridersville along I-75 just south of Lima.

“One thing I’ve been working on, and one reason they recruited me to Kettering,” he says, “is finding the best way to maximize bandwidth” in an area of medicine that is in high demand. “If you’re in our practice, you’re going to be treated like a member of our family. I’ve been told I’m the busiest urologist in Ohio and one of the busiest in the country. I can go home and sleep at night knowing we’ve done the best we possibly can. You can’t fix everything, but you can do things to make people feel more comfortable.”

After more than a decade in the region, he’s now bringing the same “do whatever we can” approach to The Crossroads.

“I came here and one thing I saw was there’s nowhere near enough market-level housing,” he says. It’s sorely needed given the level of industrial growth the region is seeing and trying to attract. “Companies coming here can’t grow as fast as they’d like to,” he says. Josh Bloomfield, project director, says the area’s market-rate housing shortage, given its employer growth, is around 3,000 units.

“One reason we’re so gung ho and full speed ahead on Crossroads,” Bloomfield says, “is we’ll talk to developers in Findlay and they’re getting 20% or 30% of tenants from Allen and Auglaize counties. They’ll announce a 100-unit market-rate complex and 30% [of those looking for a home] work at Pratt Paper down in Wapak. P&G is pursuing a $500 million expansion with 100-plus jobs, and they have jobs they can’t fill. If you’re trying to attract a young kid, he might be living in a nice development like this.”

Local shopping and amenities from restaurants to child-care are needed too, in order to attract and retain the quality workforce the region needs. Today, Nicholson says, too much sales tax money is spent in other jurisdictions by residents choosing to drive an hour to one of those bigger cities, which means less money to improve their home region. “One of the areas of greatest potential is the I-75 corridor. It’s ripe for a tremendous amount of growth,” Nicholson says. Now it’s time to match the area’s strong industrial development track record with an equally robust effort in housing and mixed-use development.

Ducks in a Row

The Crossroads concept comes by its name honestly: If the area circumscribed by the cities of Toledo, Dayton, Columbus and Fort Wayne were a stick-figure constellation in the sky, the Lima area would be its heart. Telescope in and you’ll find the Cridersville location in the right atrium, midway between Lima and Wapakoneta, between Bluffton and Sidney, between St. Mary’s and Russells Point, and between Findlay and Troy.

Bloomfield, a native of the area who returned to raise a family, thinks a surgeon’s mind works great for real estate development.

“He takes a holistic view of things,” Bloomfield says of Nicholson. “He orders an ‘MRI’ for information. When we needed borings, we got it bored.”

Essential to the process is getting all 10 regional counties on board, via an organization called 10 for West Central Ohio (TEN 4 WCO). Some of the hardest parts are already in the rear-view mirror: years of land banking a total of 250 acres that began with 30 acres in 2014; utility provision; development agreements. Good partners in such companies as Columbus-based engineering firm Korda and Meyers + Associates Architecture.

“A lot of the work was done before we got involved,” says Christopher Fleming, partner and civil engineer at Korda. “They got water and sewer across the Interstate for us. The zoning was figured out. The big pieces are ready to go. Normally we spend a year or two messing with this kind of stuff. Their relationship with Cridersville really makes this fairly smooth.”

Even a handful of homestead farms didn’t raise objections.

“We’ve talked to them from the get-go. A lot of them are very excited about it,” Nicholson says. “My concern was it would lower value of some of the property around there because you’re next to a big development. So we offered everybody to pay for a current appraisal on their house, one, so they’d know, and two, if the property value declined and they wanted to move, we’d make sure to make them whole.”

An important source of support is a tax increment financing district approved by the Village of Cridersville. “The attorney who wrote the legislation for the State of Ohio said it’s the most powerful TIF for a developer he’s seen passed into legislation,” Nicholson says. “It will allow us hopefully to do some things with bonds coming soon to put in green space, parks, a river walk — things we couldn’t do without access to tax increment financing.”

Also handy: a four-lane overpass at the I-75 exit.

“Fifty years ago when the freeway came in, the mayor lobbied hard for the four-lane overpass because, he said, ‘Something’s going to happen here.’ It’s been very helpful with our traffic studies,” in an area that sees 15 million people a year pass through.

Among the development’s features is a large-scale regional child-care complex with a projected capacity of 425 children.

“Drop off the kids, grab your coffee and you’re on I075 within 30 minutes of all these employers,” Bloomfield says. With a renewed emphasis on work-life balance, he notes, it will help as employers are having to get creative with shift scheduling.

‘Salt of the Earth’

Patients for his medical practice already come from across the state and beyond. Could The Crossroads turn into a medical tourism destination? Part of the plan is an ambulatory surgery center, expected to break ground next spring, and there are four hotel sites already in the plan, with more mixed-use sites available if more hotels are needed. As for light manufacturing, “there is a lot of other property in the TIF district,” Nicholson explains. “It’s a rolling TIF, so as we add additional properties, the clock starts at that point.”

Why’s he doing it?

“One of the main reasons is I live in this community,” he says. “I’m committed to it. I love my patients. These are salt of the earth people. They deserve to have nice housing, entertainment and shopping options where they live.”

Nicholson says the three universities in the area are trying to grow and also need housing. Asked about partnering with them, he asks back, “Would we have the ability to put in a satellite campus? Absolutely. One nice thing about the potential to add on property is we could almost build a city from scratch.”

Some people joke that Lima stands for “Lost In Middle America.” The Crossroads aims to help talent and employers find middle America again. 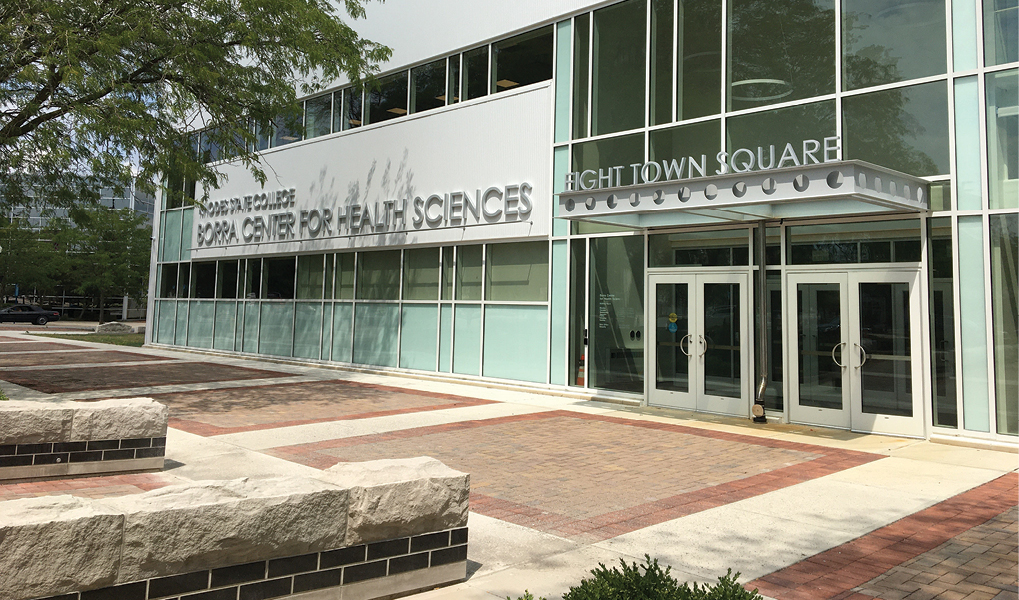 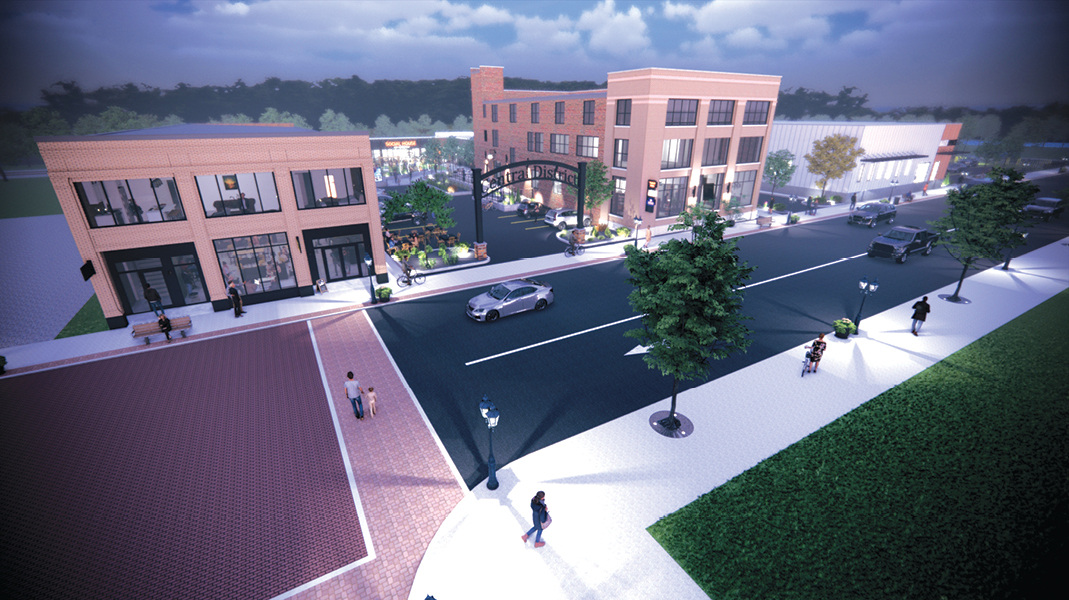