The project speaks to the transformative momentum in northeast Indiana. 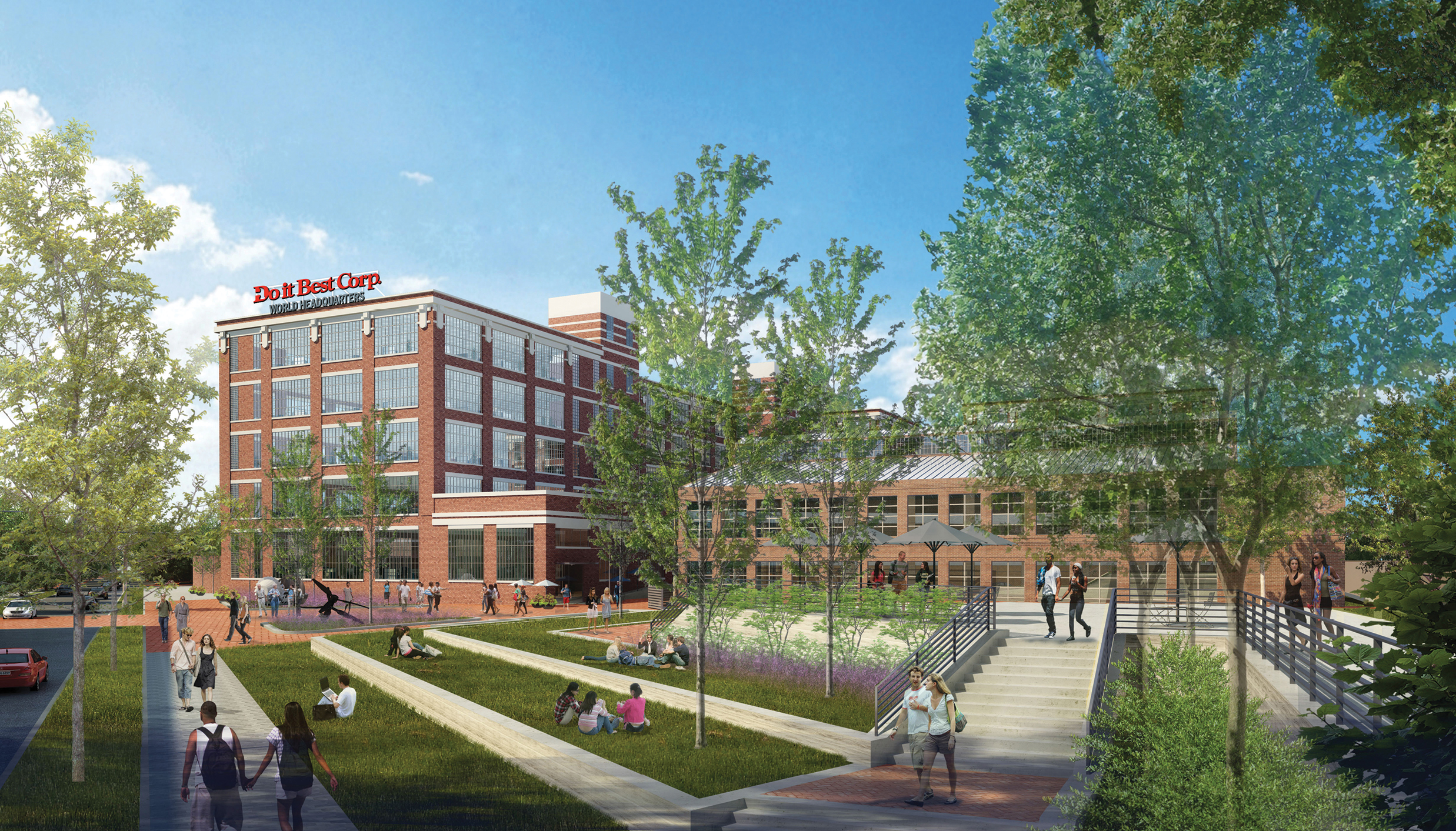 Do it Best’s headquarters will occupy a facility in the former GE factory complex known as Building 26.
Image courtesy of Ancora
by Adam Bruns
F

That’s the slogan of Do it Best, the $5.2 billion member-owned hardware, lumber and building materials cooperative based in Fort Wayne, Indiana. Later this year the company is moving 450 employees — company leaders say that may turn to 500 quickly — from an outgrown patchwork of buildings to a gleaming new headquarters at Electric Works, the redevelopment of an 18-building General Electric factory complex that was shut down in 2015.

The 39-acre property was acquired for redevelopment in 2017 by a partnership led by Ancora Partners, based in Durham, North Carolina — a town synonymous with making legacy industrial real estate into the hippest place to be. Fort Wayne is headed toward that same vision with a 730,000-sq.-ft.-plus innovation district being developed by RTM Ventures, backed by capital sources from the National Trust Community Investment Corporation (NTCIC) that include $35.7 million in federal Historic Tax Credit (HTC) equity (NTCIC’s largest HTC investment in its history) and $12.5 million in New Markets Tax Credit allocation.

GE was an anchor in the community for more than 100 years. Ancora — whose name in Italian means both “anchor” and “again” (as in bringing new life to old places) — stands at the precipice of adding another revitalization to a roster of successes and ongoing projects that includes not only Durham, but the Purdue Innovation District, Indiana University Health Center in Bloomington and the transformation of the former Lion Brothers Building in Baltimore.

“The region has a high quality of life with a competitive cost of living, and a strong sense of regionalism and collaboration exists among leaders in the private, public, education, and nonprofit sectors,” he says, saluting civic leaders’ vision and implementation plan, and the support of entrepreneurs who chose to invest in their own community.

“What gave us confidence to invest over $400 million in Electric Works through two phases was that the community had been investing in itself,” Kingsbury says. “A downtown baseball field was the spark, leading to $1 billion of investment in a decade. A $100 million riverfront plan is now in its second phase. What had been key to Fort Wayne’s growth in the 20th century,” he says, “will be key to its growth in the 21st century.”

The following is an edited transcription of email interviews conducted with Do it Best President and CEO Dan Starr and Jeff Kingsbury this summer.

Q&A: Dan Starr, President and CEO, Do it Best

We know you’ve decided the investment at Electric Works was the best choice. Was it your first choice?

Dan Starr: Electric Works provides an unparalleled opportunity to step into a unique and desirable workspace, one that will, first and foremost, be better for our current team and position us as an employer of choice for an increasingly multigenerational workforce. This allows Do it Best to be both a great company to work for and a great place to work at. The campus environment provides our staff with quick access to education, medical and other resources. The campus environment is appealing to our staff as we look to provide convenience, but also to collaborate with other complementary businesses in Fort Wayne.

Dan Starr: The primary motivation for us was to find the ideal space that would allow us to grow in the right way. We have a great culture, and our HR team does a phenomenal job recruiting and retaining top talent. Electric Works provided an opportunity to support our culture with a great physical space where we can collaborate far more effectively. Currently, our office, which has been converted from our original warehouse, is surrounded by railroad tracks and industrial buildings. For a corporate headquarters — where we’re not actively doing any distribution or warehousing — it’s not an ideal location, with departments and work groups often cut off from each other. The Electric Works campus itself will be a gathering place of innovative and forward-thinking companies, organizations and universities. The campus will have a variety of restaurants, a food hall — which will include a farmer’s market — and several other amenities that will benefit everyone.

What is your latest update on recruitment and move-in?

Dan Starr: Our team is anxiously awaiting the move — we’re ready. We’ve had several opportunities for our team to tour the campus and our building. We’re sharing monthly updates with our team via photos and videos. It’s exciting to watch it all come together. The team is already starting to imagine how they will work in our space — what the workstations will be like and how the layout improves our collaboration among our departments and divisions. We’re really looking forward to the relocation later this fall.

Redevelopments of legacy industrial properties like this one come with layers of history, documentation and often environmental contamination. Describe how you and partners have tackled these issues.

Jeff Kingsbury: Manufacturing had existed at this site since 1883 and General Electric had extensive documentation of its century of operations. Ancora had deep experience in brownfield redevelopment and was able to analyze and underwrite the risk and take it on. Regardless, acquiring nearly 40 acres, 1.2 million sq. ft. of 100-year old buildings from a multinational conglomerate and a Class I railroad was no easy task. However, Ancora, GE, the State of Indiana, and the community of Fort Wayne wanted to do the right thing — transition this property from a crumbling reminder of Fort Wayne’s past to a new engine of economic development for the 21st century. We continue to work with GE and the state on the remediation plan and close-out, and hope GE will find their way back to this important site in their history of innovation with future investments in Fort Wayne. 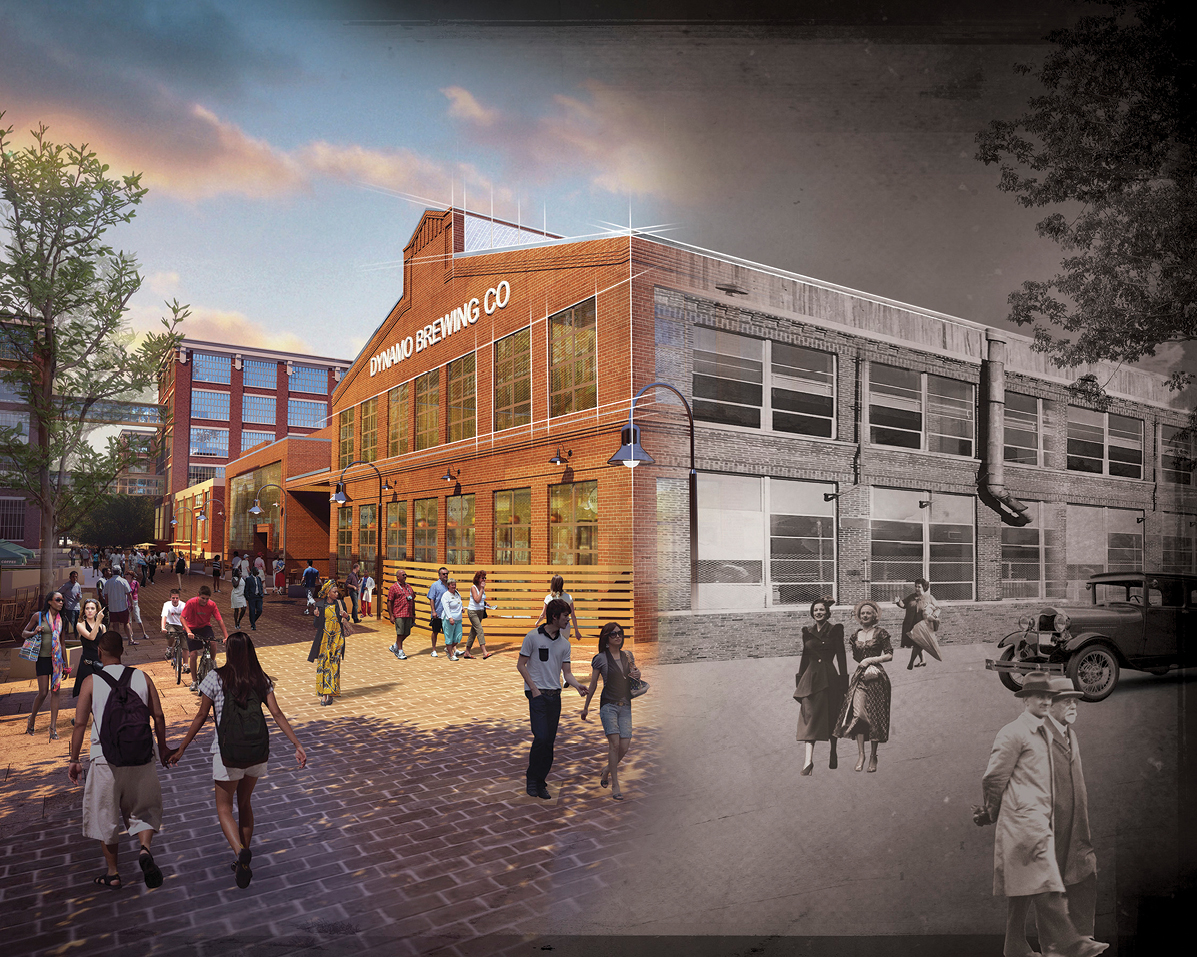 Ancora’s Jeff Kingsbury hopes GE will find its way back to its former property some day as the site is reborn as Electric Works.

The Electric Works redevelopment benefits from New Markets Tax Credits and Historic Tax Credits. Do you think corporate leaders are as aware as they should be of how these programs can help redevelopment projects happen? Are they perhaps reluctant to engage because of perceived compliance headaches?

Jeff Kingsbury: These types of projects are not for everyone. Transformational redevelopment and reuse projects are becoming increasingly complex and require multi-disciplinary teams to execute. They are mission-driven, beyond meeting the financial returns. They take time to put together and demand patient capital. They take deep expertise in knowing how to successfully layer multiple federal, state,and local economic development tools and incentives with private capital and manage compliance. And the hold periods don’t always fit the pursuit of quarterly returns. We are strong advocates nationally for the expansion of the HTC to a 30% credit and to make the NMTC permanent. We believe these programs are smart public policy and fiscally responsible by incentivizing private capital to invest in our communities.

Asset disposition can be a big challenge for all sides. Describe how you and your RTM colleagues have worked with GE before, during and since the 2017 acquisition.

Jeff Kingsbury: In 2015, Eric Doden, then president of the Indiana Economic Development Corporation, attended a ribbon-cutting on a new GE Aviation jet engine facility in Lafayette, Indiana. Eric congratulated and thanked GE for their investment in the state and then in the next breath asked them what they were going to do with the decaying 40-acre complex in his hometown of Fort Wayne. As Eric was recruiting national developers to come to Fort Wayne, he was introduced to Josh Parker [Ancora’s founder, chairman and CEO], who had a significant role in the renaissance of downtown Durham, a peer city to Fort Wayne. Eric and Josh met in December 2015 and on a drive by the site, Josh immediately saw the potential of the 1.2-million-sq.-ft. historic campus. The buildings were on track for demolition at some point in the future. Josh had been part of the team developing Cortex Innovation Community in St. Louis and knew some key people at GE. He put a couple calls in to encourage them to save the buildings from demolition and put the property on the market. 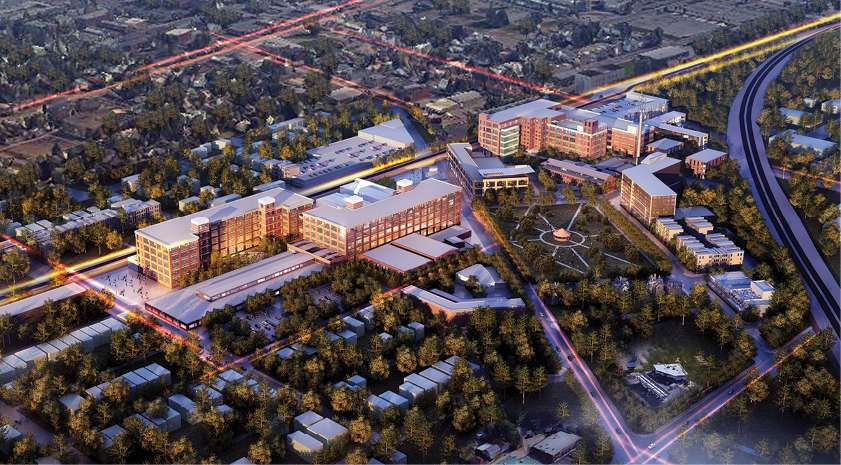 Jeff Kingsbury: From the beginning, the vision was to create at Electric Works a continuum of lifelong educational opportunities, from early childhood to high school, and from undergraduate programs to incumbent worker training. It’s significant for this community, as there hasn’t been a school in this neighborhood for 45 years, when employment significantly tapered off at General Electric. Amp Lab will serve 400 11th and 12th grade students from Fort Wayne Community Schools, the largest district in the state. More than half of the students are girls and over 60% are children of color. It’s fitting that this next generation are the first tenants at Electric Works. We see an opportunity to create a new model for secondary education, where students and teachers are working collaboratively with businesses and higher education institutions to create immersive and project-based learning experiences within a mixed-use district. We have been so encouraged by the response from the Electric Works tenants seeking to create internship and mentorship programs, as well as college credit programs for students.

What have you learned from your redevelopment experiences in other communities that you’re applying to this project? What can the Fort Wayne region learn?

Jeff Kingsbury: Place matters. Leading businesses certainly understand that, and cities and states are finally getting serious about how investments in quality of place contribute to attracting and retaining talent, which is the currency of economic development. In creating quality of place, the right physical environment must support and enhance the connections among education, industry sectors and entrepreneurial ecosystems. We believe in the power of anchor institutions — universities, colleges, medical centers, and major corporations — to be the drivers of inclusive growth and in attracting and developing talent, not just in major gateway markets, but in secondary cities across America too. Real estate, like politics, is local. The project can’t be cookie cutter; it has to be of that place and borne from the vision of its people. We spend a lot of time making those connections before we invest and well into the future. 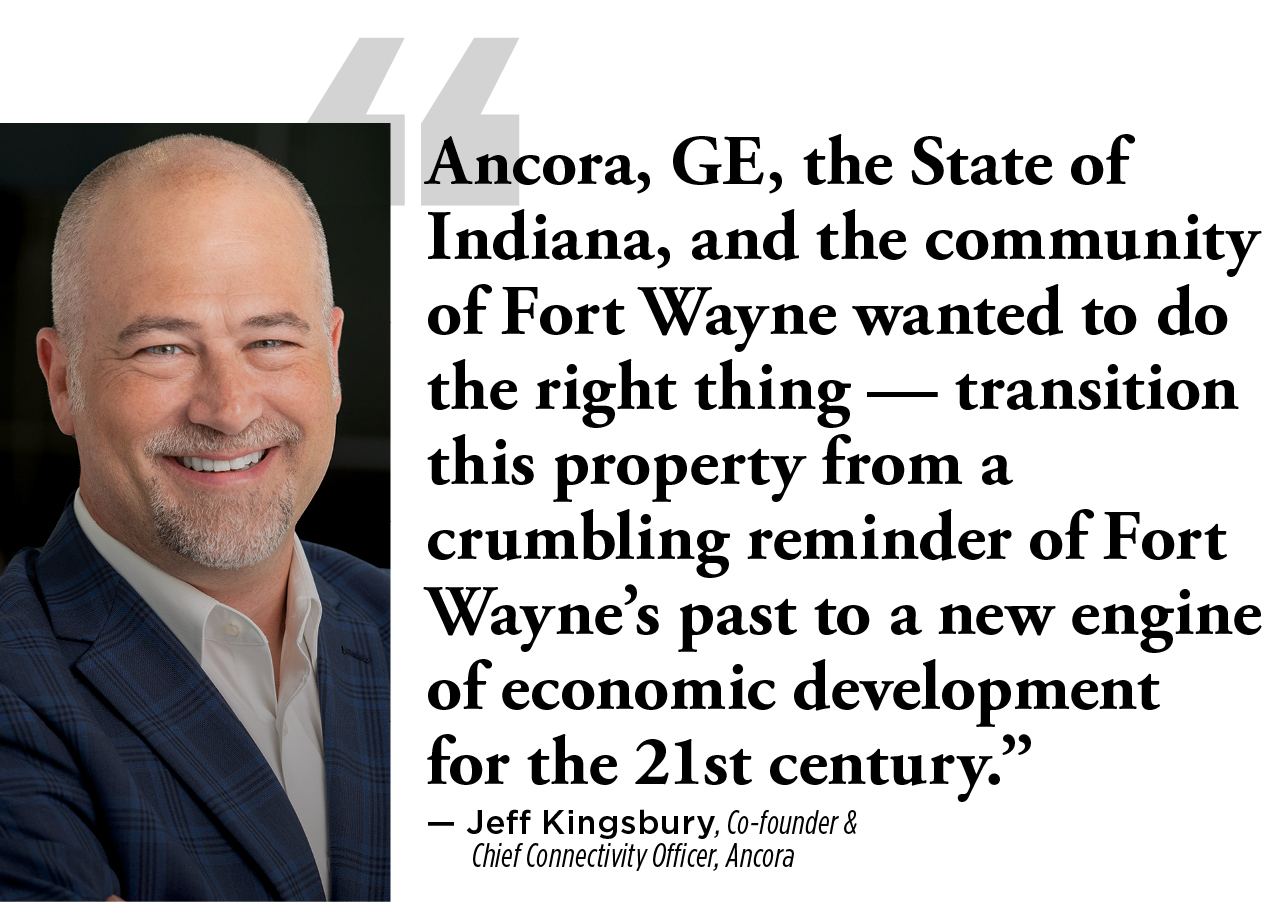