Mississippi County will soon take over as the top steel producer in the country.

The LMXT air tanker is made by Lockheed Martin in Arkansas.
Courtesy of Arkansas EDC
by Ron Starner
H

ow do you follow up a $3 billion capital investment by U.S. Steel to start the year? If you’re the leader of Arkansas’ economic development efforts, you press for more.

That’s exactly what Mike Preston is doing. As secretary of commerce and executive director of the Arkansas Economic Development Commission in Little Rock, Preston leads a network of economic development professionals statewide in pursuit of advanced manufacturers employing highly skilled and well-compensated personnel.

If 2022 is any indication, Preston and his team are on an unprecedented roll. On January 11, U.S. Steel Corp. announced it would build a $3 billion mill in northeast Arkansas and hire at least 900 workers. The Pittsburgh-based firm said it chose Osceola, about 50 miles north of Memphis, for the mill that is expected to be completed by 2024.

Together with the Big River Steel plant, also owned by U.S. Steel, and a steel mill owned by Nucor Steel, Mississippi County will soon rank as the No. 1 steel-producing county in the country.

The giant U.S. Steel news was followed in May by some pretty big news from Atlas Tube, a division of Zekelman Industries, a Canadian company owned by billionaires Barry, Clayton and Alan Zekelman. Atlas announced May 4 that it would invest $150 million to create the world’s largest ERW (electric resistance weld) mill in Blytheville, Arkansas.

“Thanks to companies like Atlas Tube, Mississippi County continues to lead the country as a premier steel producer,” Gov. Asa Hutchinson said. “Their $150 million will go a long way to improving the quality of life for Arkansas not only in Blytheville, but also the surrounding areas.” The move adds 75 jobs to the area.

Preston says the state is not done. In 2021, AEDC worked with 29 companies on projects that will create an estimated 4,286 jobs and result in total investment of over $1.6 billion. Arkansas has already exceeded that investment total this year and is gunning for more.

On August 12, we caught up with Preston on a video call. Speaking from his Little Rock office overlooking the Arkansas River on a beautiful Friday afternoon, Preston seemed both relaxed and confident as talked about his state’s recent accomplishments and future outlook.

How did you and your team win the Atlas Tube steel project?

PRESTON: It has to do with the growth of the steel industry in northern Arkansas. When you land both Nucor and U.S. Steel, you tend to have a lot of supply chain companies come into your state too. Atlas Tube is part of Zekelman Industries. The Zekelman family has been fantastic to work with. With the large steel industry now in that part of the state, there is a natural draw to that area. Also, if you look at the workforce training programs that we have been able to produce in northern Arkansas, it has set us up for success. For example, we set up the Arkansas Steel Academy for young people. We put them through a hands-on training process. They get to work from day one. Being able to show a program like that to prospects is a difference-maker.

What’s driving the growth of the steel industry in Arkansas now?

PRESTON: It is a combination of a lot of things. Timing is important. We are located in the heart of the country. Being located right off the Mississippi River makes it easy to bring in scrap material. Plus, with the country’s renewed investment in infrastructure, it has created demand for steel products. Water and sewer lines need to be redone, and those materials are made here. When the infrastructure bill passed, that became a boon for us. We make a lot of the steel for those projects. Big River Steel is making the flat-rolled steel, and as many OEMs have moved southward, they have a need for the very thin specialized steel that we make. 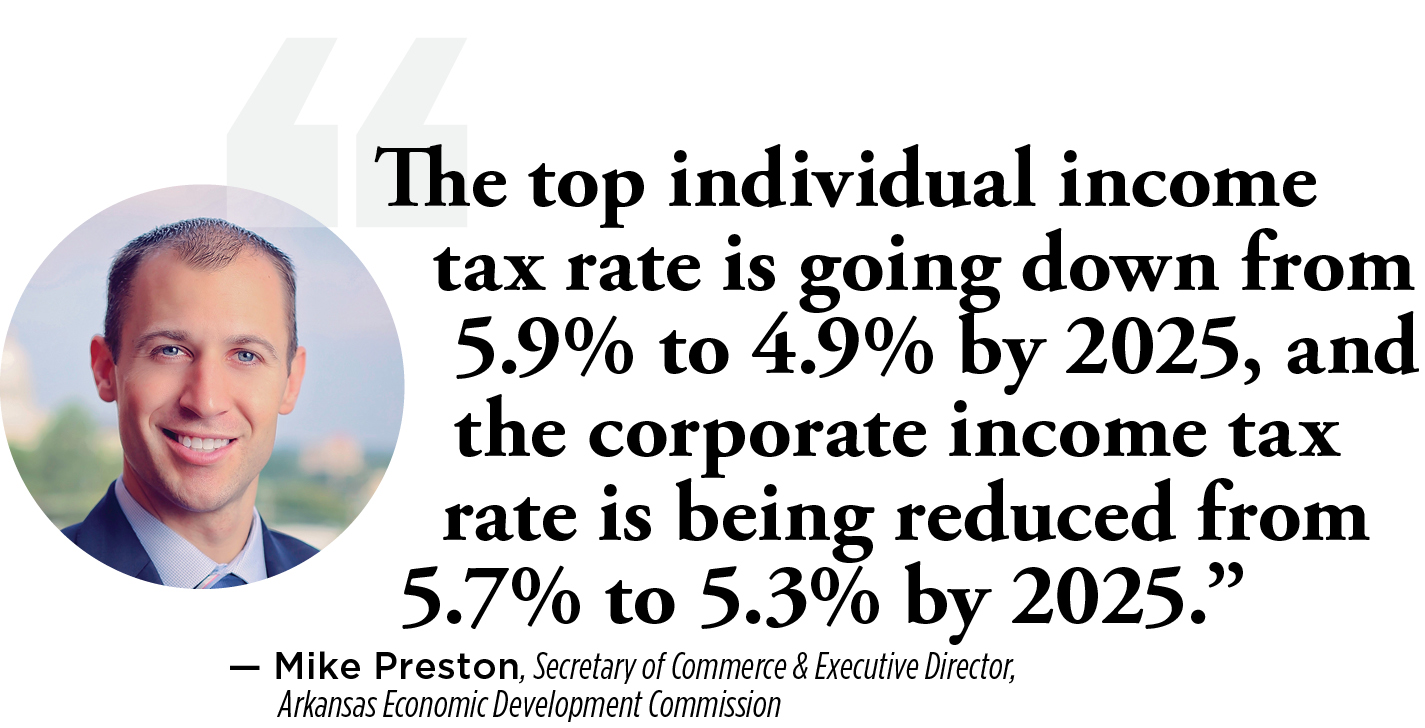 What other sectors are growing in your state?

PRESTON: Aerospace and defense continues to thrive for us. That sector jumped to our No. 1 export in Arkansas now, led by Raytheon, Lockheed Martin, Dassault Falcon Jet and others. Look at what’s happening in Ukraine as they’re trying to battle back against the Russian army. The javelin missile components being used by the Ukraine military are made right here in Camden. The propulsion and guidance systems are made in Arkansas.

What are your state’s biggest competitive advantages?

PRESTON: The biggest is our proximity and logistics. A great Interstate system, rail system and navigable rivers cut across our state. We can get products out very quickly. People want more of a domestically produced product. We can get product turned around quickly. People also look for financial stability, especially in uncertain times. They want to make sure a state is well managed. We have a $1.5 billion reserve fund and a $1.6 billion surplus. The top individual income tax rate is going down from 5.9% to 4.9% by 2025, and the corporate income tax rate is being reduced from 5.7% to 5.3% by 2025. We show businesses that we are a good steward of taxpayer funds.

How involved do you and the governor get in recruiting companies to invest in Arkansas?

PRESTON: We are hands on with just about every single project we do. When U.S. Steel narrowed their list of sites down to five, the governor and I took the initial call. That began last September. We were engaged every day until the announcement was made in January.