An aerial view of the Port Access Road in Charleston, South Carolina with the Hugh K. Leatherman, Sr. Terminal visible in the background captures the combined power of multiple infrastructure modes.
Photo by Fluor courtesy of Business Wire
by Adam Bruns
D

rive any American highway, especially at night, and you see them: Long lines of truckers who, if not backed up for miles by construction or an incident, cover every inch at rest areas, including the on and off ramps.

2021 was the costliest year ever for U.S. trucking operations, even as they were able to average a 10% operating margin thanks to the juggernaut that is today’s logistics scene.

After viewing motor carriers’ 2021 financial data, the American Transportation Research Institute in August released an update to “An Analysis of the Operational Costs of Trucking” that found the total marginal cost of trucking grew by 12.7% in 2021 to $1.855 per mile, the highest on record. “Leading contributors to this increase were fuel (35.4% higher than in 2020), repair and maintenance (18.2% higher than in 2020), and driver wages (10.8% higher than in 2020),” said the ATRI. “On a cost-per-hour basis, costs increased to $74.65.”

The nation’s highest repair and maintenance costs were in the Midwest, while the lowest were out West.

“Tires are the part most directly impacted by poor road conditions, and they are a significant enough expense that our Operational Costs report always tracks them separately,” says ATRI Research Analyst Alex Leslie. “Burning through tires isn’t just costly — it’s also inefficient. Differences in quality of transportation infrastructure definitely have an impact on operational costs. Repair and maintenance is another area where infrastructure costs carriers. Suspension is one specific part that takes extra wear on lower quality roads.”

The biggest impact, he says, comes from bottlenecks: The ATRI famously issues an annual list of top bottlenecks, which “hit carriers with extra fuel costs and extra wage costs — their two highest line items,” Leslie observes. “Deadhead mileage exacerbates this problem, and in some areas deadhead mileage may be the result of inadequate infrastructure.” 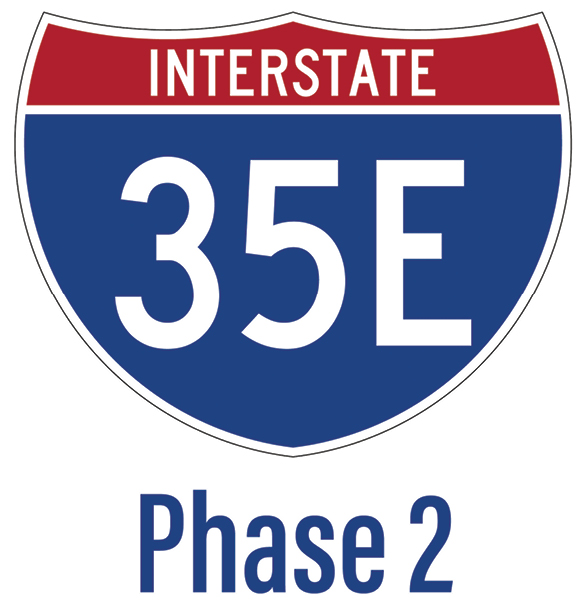 Work to improve I-35 and its branches in Texas has improved Fluor’s bottom line.

A tidy $550 billion in new spending from the Infrastructure Investment and Jobs Act (IIJA) over the next five years may help make things at least adequate again amid a booming logistics marketplace.

Logistics facilities are one part of Site Selection’s Conway Projects Database, which tracks major corporate end-user facility investments and expansion. We looked back at five years of project data, then added data from the Federal Permitting Dashboard (which tracks infrastructure projects across the nation) and the Global Infrastructure Hub’s Global Infrastructure Monitor report, which offers infrastructure investment per capita and GDP per capita figures. The result is this year’s Global Groundwork Index, which offers a snapshot of where private- and public-sector physical facility investment are converging for the public good and increased prosperity.

This year’s methodology differs from that of past Global Groundwork Index rankings, but the results are strikingly consistent despite the change in sources. While the United States claims the crown among countries, last year’s No. 1 Canada is a strong No. 2 this year. South Korea, Mexico and India fill out the top five.

Among U.S. states, perched above powerful corporate/infrastructure blends in Georgia, Indiana, Virginia and Arizona sits the state of Texas, repeating last year’s No. 1 ranking. As it happens, Texas — known for its rabid independent streak and history of butting up against the federal government —has so far garnered the second-highest IIJA funding of any state at $8 billion, behind only the $9.2 billion going to California, which ranks 20th in our index.

The Texas Department of Transportation is responsible for maintaining 80,000 miles of road and for supporting aviation, maritime, rail, and public transportation across the state. Interstate highway projects to relieve some of those nationally prominent congestion points are a high priority.

In March, TxDOT gave Lone Star Constructors — a JV between Fluor Corp. and Austin Bridge & Road — notice to proceed on its contract to begin construction this summer on phase two of the 6.3-mile Interstate 35E (I-35E) project from Interstate 635 in Dallas to the Denton County line in Carrollton, Texas. The project’s anticipated completion is early 2026.

“When completed, this project will help alleviate traffic congestion to the surrounding communities and improve connectivity for all people in the Dallas metroplex,” said Thomas Nilsson, president of Fluor’s Infrastructure business.

Traffic is also cropping up in booming Austin, where Fluor was awarded another TxDOT contract for the I-35 Capital Express South project, a nine-mile project due to be complete in 2027 that Nilsson called “the first in a series of vital infrastructure projects to rebuild the I-35 corridor in Austin in response to business and population expansion in one of the country’s most dynamic regions.” Part of one of the most traveled Interstates in Texas, this section of I-35 in Austin sees 150,000 vehicles per day. Between the two projects, Fluor booked a cool $1.18 billion and continued writing a Texas book of transportation infrastructure business that has been compiled over nearly 20 years.

The litany of Interstate-connected projects seems nearly as long as the 46,876 miles currently comprising the system. Among highlights from around the country:

Another project involving Fluor is the newly completed Port Access Road at the South Carolina State Port Authority’s Port of Charleston. The elevated viaduct structure “directly accesses I-26 and avoids railroad crossings, local street crossings and tidal creeks,” said Fluor upon completion in February. “It includes a new fully directional interchange on I-26, the reconstruction of two I-26 exits, a three-level flyover interchange and local roadway enhancements” that enhance access to the port’s new Hugh K. Leatherman, Sr. terminal.

“The new interchange could see an estimated 17,000 daily trips in its first year due to pent-up demand,” said a release from developer Southeast Venture and BELL Construction, “and that number is predicted to increase to 44,000 over the next 20 years, according to a regional traffic study conducted by KCI Technologies.” The interchange is due to open in April 2023.

A new interchange on I-79 near Morgantown, West Virginia, is attracting the support of Gov. Jim Justic. The Harmony Grove project will serve the new Morgantown Industrial Park and other businesses and homes in the Harmony Grove area of Monongalia County, just south of Westover.

“Morgantown and all of north central West Virginia is a region of our state that continues to grow like crazy,” said Justice. “This project to reshape I-79 is a large but necessary undertaking to provide convenient access to the industrial park and other areas where business is flourishing more than ever before.”

Caught In the Act: An Update on the Bipartisan Infrastructure Law

If you’re looking for even more current numbers, dig into the “Data to Decisions” website maintained by the General Services Administration, where all funding data so far from the IIJA (now called the Bipartisan Infrastructure Law or BIL) is on display down to the individual award level. As of early July, more than 7,500 funding items were listed in the program’s massive spreadsheet, with a huge chunk going toward airports, and ample funds headed toward such categories as inland flood risk management, rural transportation, mobility for seniors and those with disabilities, drinking water, congestion mitigation and air quality programs, Corps of Engineers operations and the national highway freight program. Four of the top 10 states in funding so far are among the top seven in our Global Groundwork Index: Texas, Ohio, Georgia and Virginia. The entire top 10: 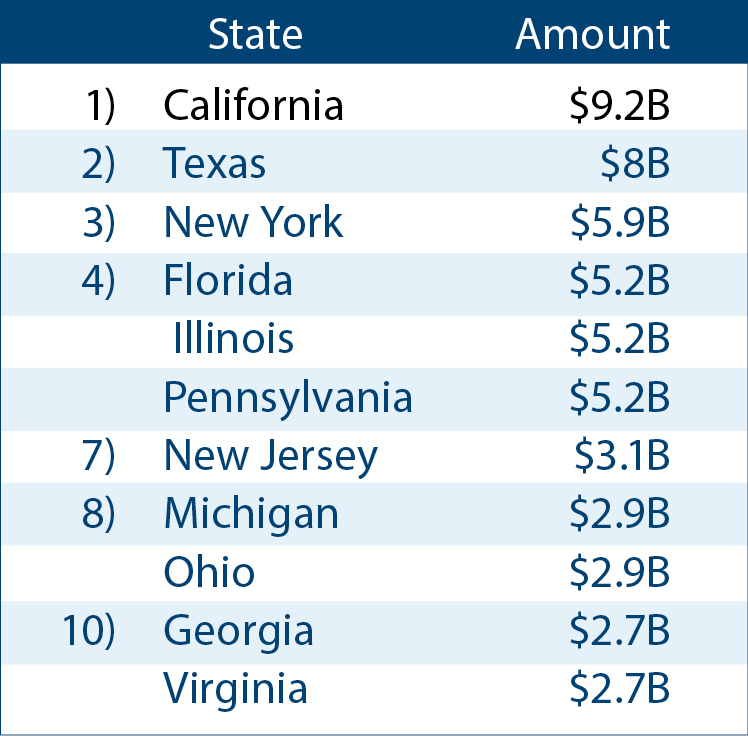 If traipsing through the 459-page “Building a Better America” guidebook from the White House isn’t your speed, here are edited highlights of the BIL from the National Conference of State Legislatures, reordered by funding amounts: 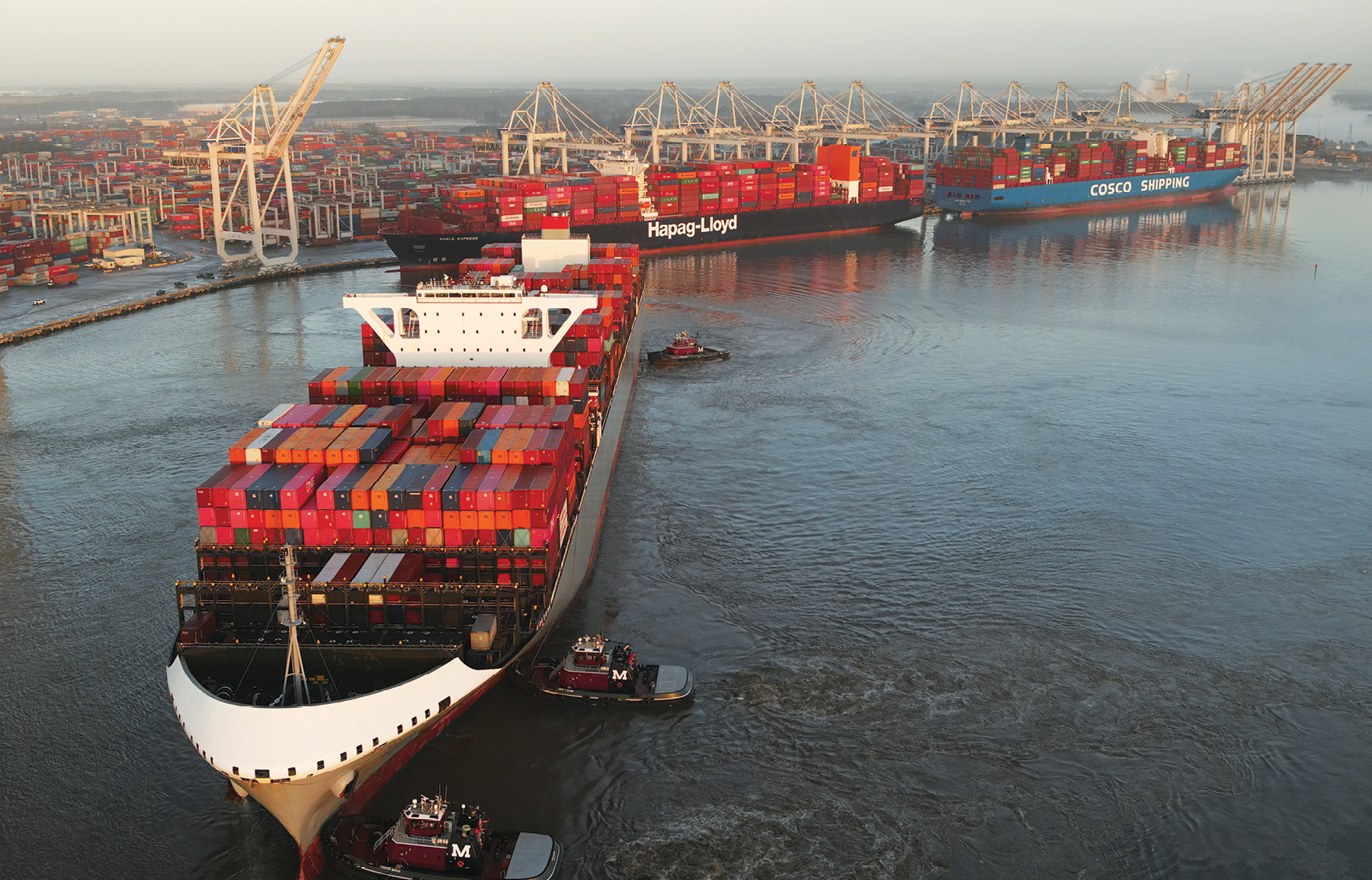 No. 2 Georgia’s best infrastructure symbol is the fast-growing Port of Savannah. 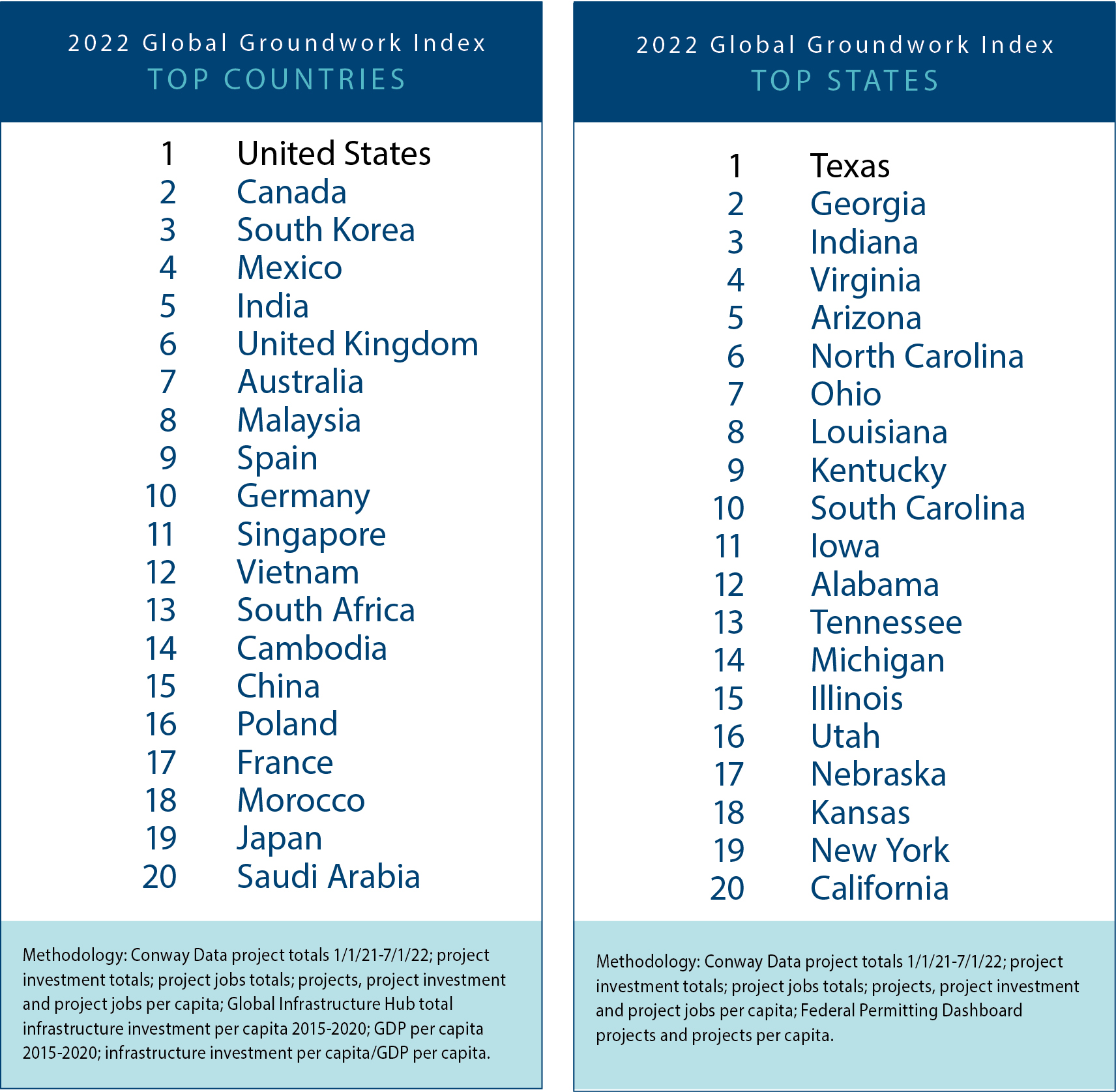 Not everyone is excited about the BIL’s Buy America provision, however, however patriotic it sounds. Associated General Contractors of America CEO Stephen E. Sandherr said the requirement “makes no sense to place unrealistic limitations on firms’ ability to source key materials at a time when prices for those products are skyrocketing and supplies are limited. Supply chain shortages are already prompting firms to avoid bidding on new projects, as the Army Corps of Engineers discovered on a recent project that received zero bids because of concrete scarcities in parts of the country.”

He said the mandate requiring agencies to go through the White House to get waivers for materials not made in America is even worse. “This is like asking the U.S. Department of Education to verify every child’s permission slip to miss a day of school. Instead of improving infrastructure for the benefit of communities across the nation, firms will have to spend more time waiting for federal officials to decide whether a project is in compliance with the administration’s latest layer of red tape.

“Americans were right to be excited about the potential for the Bipartisan Infrastructure Law to make our economy more efficient, our commutes faster, our water safer and our economy stronger,” he said. “But this new mandate will leave too many taxpayers wondering where the trillion dollars went while they are still stuck in traffic, still hearing about boil water orders and still wondering why we can’t have better transit systems.”

According to the American Public Transportation Association (APTA), an international association of 1,500 public- and private-sector organizations, nearly half of the urbanized areas leading the country in transit ridership per capita are college towns, including Ames and Iowa City, Iowa; Champaign, Illinois; Boulder, Colorado; Ann Arbor, Michigan; Davis, California; and State College, Pennsylvania.

That figures, given the propensity of students for riding buses around campus and around town.

The balance of those top metros (as of 2019, pre-COVID) are urban areas whose urban rail and bus systems go back a century or more: New York, San Francisco, Boston, Washington, D.C., Chicago. Citizens grow up not ever needing or wanting a driver’s license. Hopping onto a bus or descending or climbing to a rail stop come as naturally as eating, walking and breathing.

But what about the leaders whose populations are neither huge nor predominantly matriculating? They must be doing something innovative in terms of connectivity and transit-oriented development to garner all those rides.

Among the top ridership-per-capita metros (see chart), the communities that fit that description — nothwithstanding their prominent higher education institutions — include No. 9 Seattle (more than 71 rides per 1,000 residents); No. 15 Portland, Oregon (nearly 60 rides per 1,000 residents); metro Denver and Bellingham, Washington (41 rides); and Pittsburgh, Pennsylvania (38 rides).

According to the American Public Transportation Association 2021 Fact Book, of the 98 rail systems now operated by American public transit agencies, 39 new commuter/hybrid rail or light rail/streetcar systems have been added since 1999. From 2000 to the end of 2019, 69 new systems and 135 extensions (both rail and busway) opened, resulting in a total of 1,742 additional segment miles.