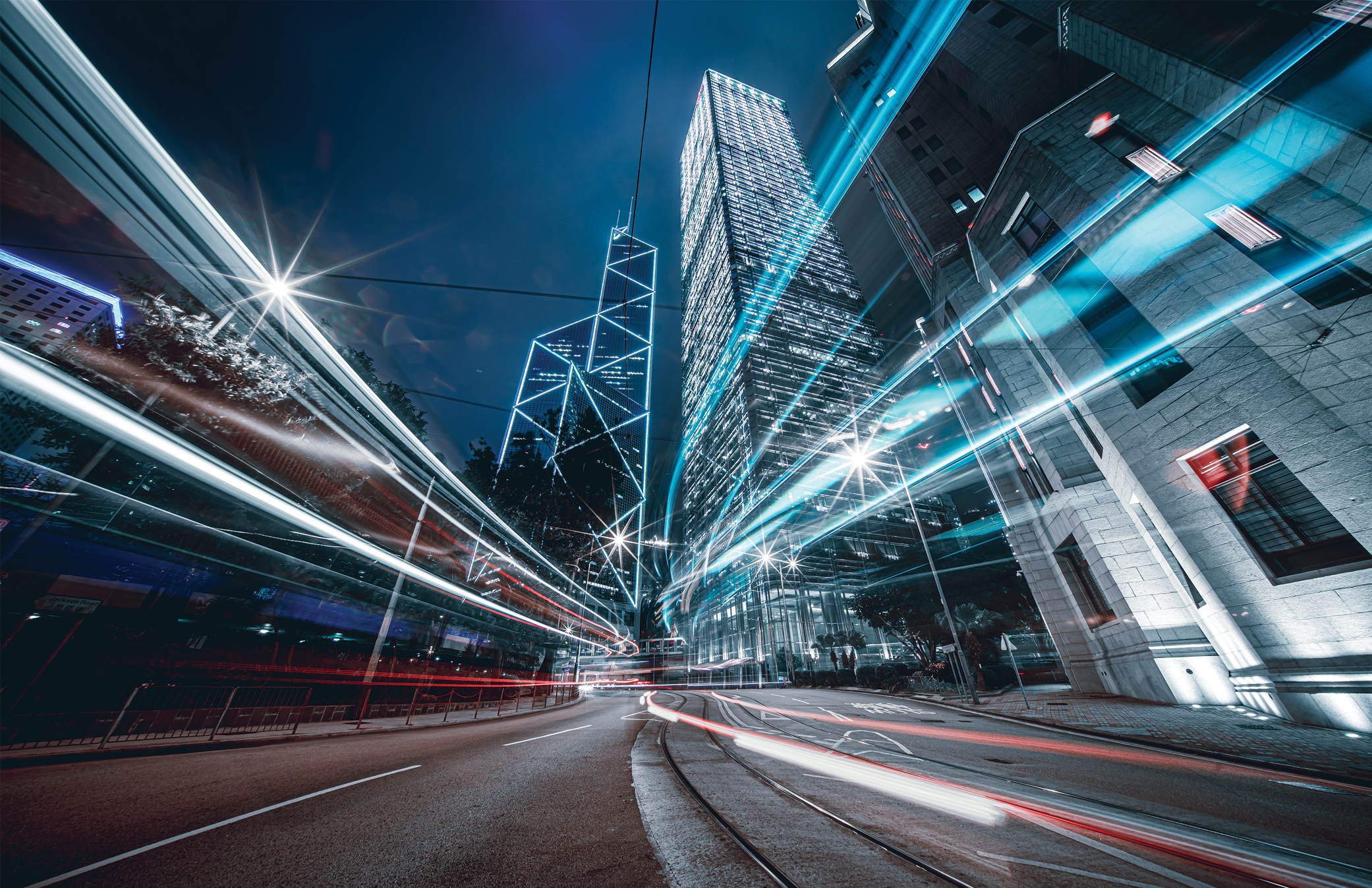 s China’s dramatic economic development the gift that will keep on giving? China’s President Xi Jinping thinks so. Whether it can compete for foreign investors’ attention with lingering Covid policies, political tensions and impending slower growth, however, is another question entirely.

While foreign investors mull over whether to reinvest in or enter the China market, a picture of what they can expect is slowly coming into view. At the Chinese Communist Party’s 20th National Congress in October, Xi Jinping secured his third five-year term. The placement of political allies in key positions in the new Politburo Standing Committee signals an even higher unification of President Xi’s governance philosophy. That said, understanding his vision for the country is to understand China’s future, at least for the next five years.

In the report delivered by Xi on behalf of the 19th CPC Central Committee, he broadly summarized several achievements and outlined critical objectives for the country. Chiefly, Xi pointed to economic development, the welfare of the Chinese people and security as his administration’s primary concerns — all of which are deeply intertwined.

During Xi’s first two presidential terms, China has seen itself developing rapidly in several dimensions. GDP has more than doubled to 114 trillion Yuan (US$16 trillion), accounting for 18.5% of the world’s economy. Per capita GDP has risen from 39,800 Yuan to 81,000 Yuan, with absolute poverty wiped out and food and energy security ensured for China’s 1.4 billion people.

However, inevitably, China will not be able to continue its prosperity at such a high growth rate in the long term. The International Monetary Fund’s World Economic Outlook estimates China’s growth rate will be 4.4% in 2023, half a percent higher than in 2022, but still a sharp decline from the country’s 8.1% growth rate in 2021, and lower than predictions made only a few months prior. This number is only slightly below what economists are predicting within China; all can agree that the country will not reach 5% growth in the year ahead. 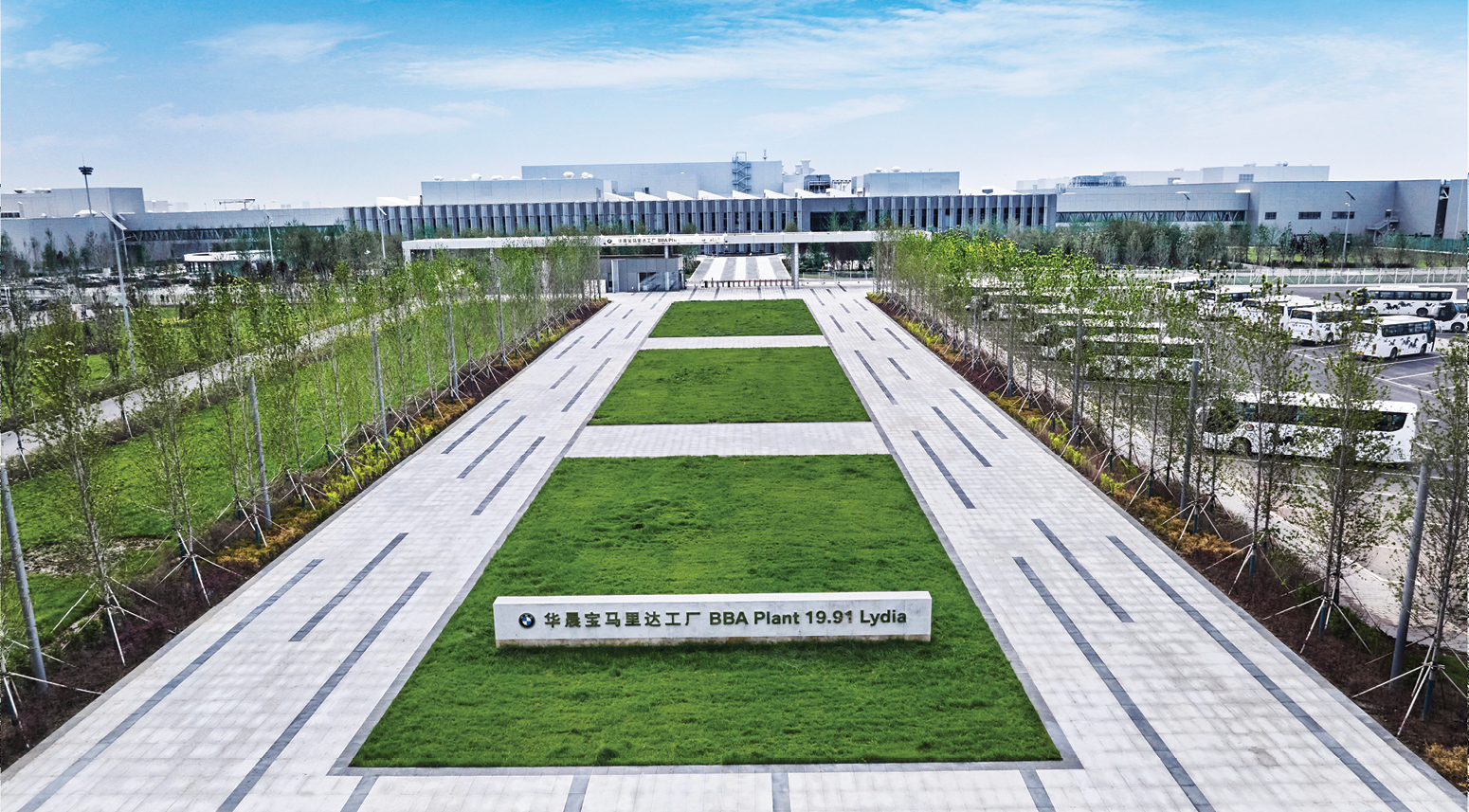 After reaffirming its BMW Brilliance JV through 2040 earlier in the year, BMW Group in June 2022 inaugurated the new Lydia plant in Shenyang, geared toward e-mobility.

Faced with this reality, President Xi set the assertive tone that China is striving to promote high-quality development and pushing to foster a new development pattern. China will implement strategies to expand domestic demand and deepen supply-side structural reform, while engaging at a higher level in the global economy. Xi also underscored the need to promote coordinated regional development internally. Accompanied by a new, sustainable consumption-oriented development pattern, one of Xi’s goals is to expand the size of China’s middle class and grow the income of the low- and middle-income groups by 2035.

A significant challenge that multinational companies will continue to face over the next few years is U.S.-China tension. In the report, President Xi describes the international environment as the “grave, intricate international developments and a series of immense risks and challenges,” alluding to the tension between China and the West, even though the report never clearly mentions the United States or the West. The yet-to-be-resolved trade war between China and the United States is one piece of evidence of what Xi indicates as “drastic changes in the international landscape, especially external attempts to blackmail, contain, blockade, and exert maximum pressure on China.” Many multinational companies report losing sales or undergoing shifts in sourcing due to uncertainty of continued supply as a result of U.S.-China trade tensions.

Xi mentioned “Taiwan” in his speech multiple times and maintained a steadfast stance on the issue of Taiwan independence, stating, “We will continue to strive for peaceful reunification with the greatest sincerity and the utmost effort, but we will never promise to renounce the use of force, and we reserve the option of taking all measures necessary.” This statement, combined with one of the most frequently mentioned words in the report, “security,” indicates that China endeavors to accomplish its sovereignty and national security goals even at the cost of economic growth and increasing tension with the West. In the worst-case scenario, the relationship between the United States and Taiwan does not improve and South China Seas tensions increase. This would likely lead to trade and investment restrictions between the West and China.

Another layer of “security” that Xi emphasized is cybersecurity. This is a major concern for both existing and future investors. In recent years, China has imposed several new digital policies, including the Cybersecurity Law, Data Security Law, and Personal Information Protection Law. Many companies are concerned that this extent of high-level regulations is increasing their operational costs and leading to restrictions on cross-border data flows.

Foreign investors are also increasingly worried that what Xi illustrates in his development plan, in some ways, signals that China’s leveraging of more resources and markets toward its domestic companies means it will be a competitive disadvantage to multinational companies operating in China. From an operational perspective China’s dynamic “Zero-COVID” policy reinforced the impression that China is isolating itself from the rest of the world and may eventually build a self-sufficient economy. As the rest of the world is opening, China’s reticence to do so continues to impact foreign investors’ ability to easily travel to and within China.

In the recent report, Xi stressed that the strict COVID policy was necessary to protect the lives of the Chinese people, and he praised the achievements of the policy. The national government has recently and surprisingly eased some of its more stringent Covid measures, a signal to perhaps further relaxation of its COVID policies. But local governments have been slow to follow, creating inconsistencies that are difficult for investors to track and navigate. Furthermore, the possibility that China could revert to its Zero-Covid policy if the public health situation were to worsen again is very real. Until foreign executives can come in freely to meet businesspeople and travel to sites, potential investments in China will be deterred. 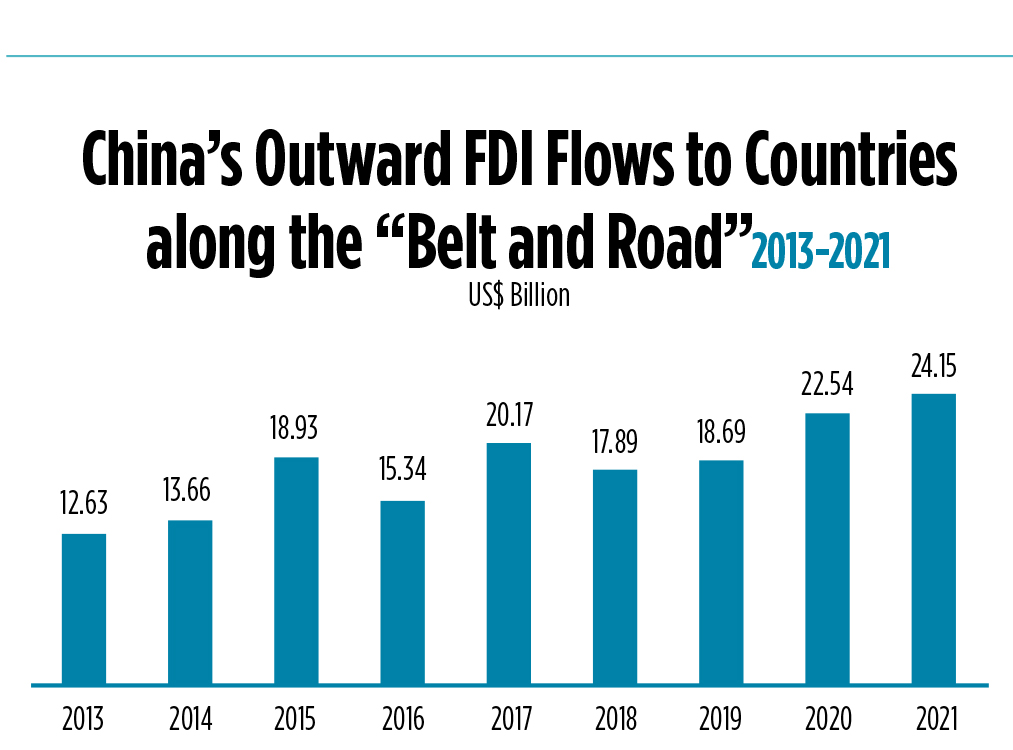 China Business Report 2022, presenting the performance of 307 surveyed member companies of the American Chamber of Commerce (AmCham), recognizes the elevated level of pessimism. Sixty-eight percent of the companies surveyed responded that the top three concerns that have caused them to decrease planned investment in China in 2022 compared to 2021 are all COVID-related. Specifically, the companies cited the impact of COVID-related shutdown, COVID-related travel restrictions, and COVID-related supply chain disruptions. Even if the government continues to relax restrictions in 2023, it may take years for international business confidence to recover from the negative effects of COVID measures in China.

Apple and Google are among the largest companies shifting portions of their production lines outside of China in response to both COVID disruptions and geopolitical tensions. Many small and medium-sized enterprises are considering whether domestic business justifies existing China investments. And those not yet in China are taking it off of their list of investment destinations, under current conditions.

Despite lingering fears, there are reasons to be optimistic about foreign investment opportunities in China. At the Congress, Xi clearly expressed his intention to expand China’s level of openness. As was stressed in the report, China will improve the level and quality of trade and investment cooperation by leveraging the strengths of China’s enormous market, attracting global resources and production factors with China’s strong domestic economy, and amplifying the interplay between domestic and international markets and resources. The size of China’s market has been a key factor driving investment and reinvestment across industries. Responding to regional growth in demand, BMW and BASF both announced plans to increase investment in 2023, joining a number of companies focused on investing in China for China, even while demand lags in other countries.

Several additional measures have been put forth to boost internal investment, including regulatory changes. Specifically, China is attempting to lure global high-tech and knowledge-based services firms into the domestic market through further liberalization of FDI regulations. In October 2022, the National Development and Reform Commission announced 15 measures to facilitate the implementation of foreign-invested projects, including assisting international travel for key personnel of multinational companies and their relatives, ensuring equal enjoyment of supportive policies from national industrial development and regional development, and allowing qualified foreign companies to raise capital on China’s stock markets. 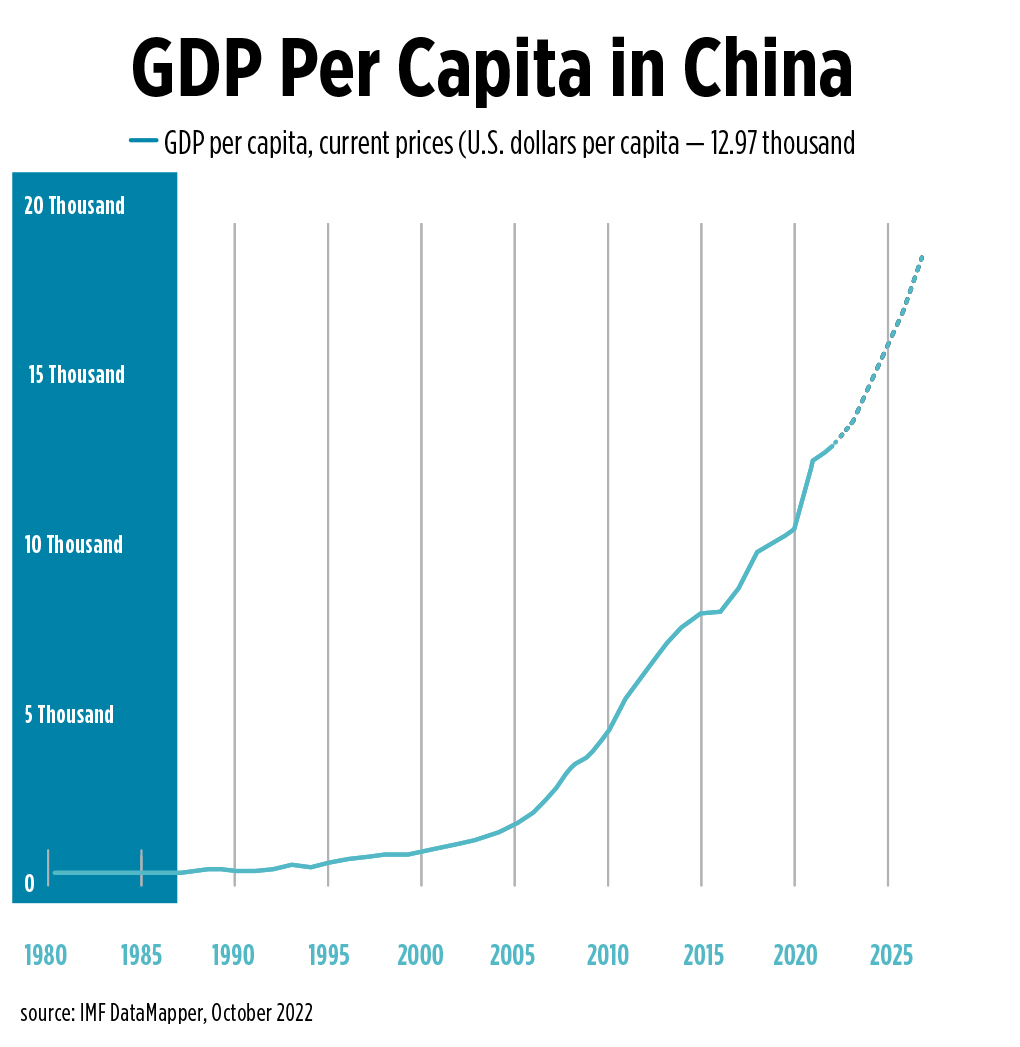 “China is constantly increasing the support for foreign investment in advanced manufacturing, modern service industry, high-tech, energy and environmental protection, and also encouraging foreign investments towards the central, western, and northeastern regions. We will provide a more attractive investment environment for foreign investors,” said Zhao Chenxin, deputy director of the National Development and Reform Commission, at a press conference of the Press Center for the 20th National CCP of China.

Following the 20th CCP, the Catalogue of Industries for Encouraging Foreign Investment (2022 edition) was published on October 28 and came into effect January 1, 2023. The catalogue bears the dual missions of attracting foreign investment to China and supporting President Xi’s concept of promoting regional development.

Continue to encourage foreign investment in advanced manufacturing as the key direction.

Continue to guide foreign investment toward the modern service industry.

Continue to guide foreign investment in central, western, and northeast China, where the number of encouraged industries rose from 755 in 2020 to 955 in 2022. Those regions have unique resource endowments and industrial advantages. Foreign investment in the industries listed in the catalogue can also enjoy three preferential policies:

Exempt the import of self-use equipment within the total investment amount from Customs duties, except for equipment not eligible according to the regulations.

Supply preferentially for encouraging industrial projects with intensive land use. The land transfer reserve price can be determined at 70% of the national minimum price by the location level.

Reduce the corporate income tax rate for qualified investments in the western regions and Hainan province to 15%.

The Chinese government is a notoriously judicious planner, and it is clear it is expecting economic growth. Despite this planning, will the economic and political hurdles prove insurmountable for foreign investors? The Chinese economy has excellent resilience, continued potential, and latitude. It boasts one of the strongest consumer markets in the world, that will continue to attract foreign investors.

However, today’s complex and intricate international environment must be carefully navigated. Investors are encouraged to consider their goals for investing in China and to keep an eye on the direction of national policies to make rational decisions in site selection. Risks always coexist with opportunities. This may be the time to test how much confidence investors have in China.