Chicago and DFW are still the cream of the crop, but other locations come into the mix as populations and strategies evolve. 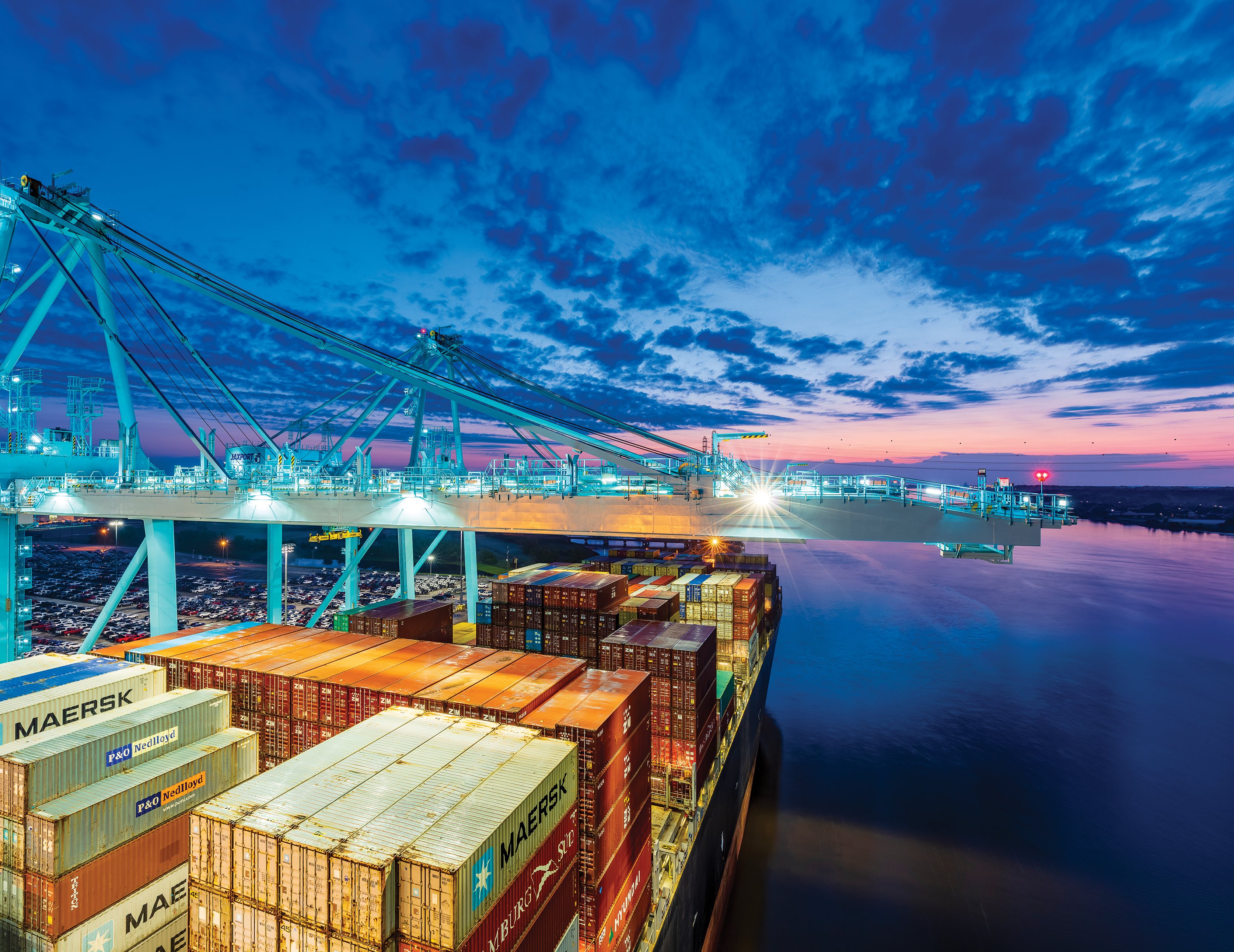 The Port of Jacksonville, No. 10 metro Miami and Tampa help Florida to a No. 7 ranking by number of logistics projects.
Photo courtesy of Jaxport
by Adam Bruns
M 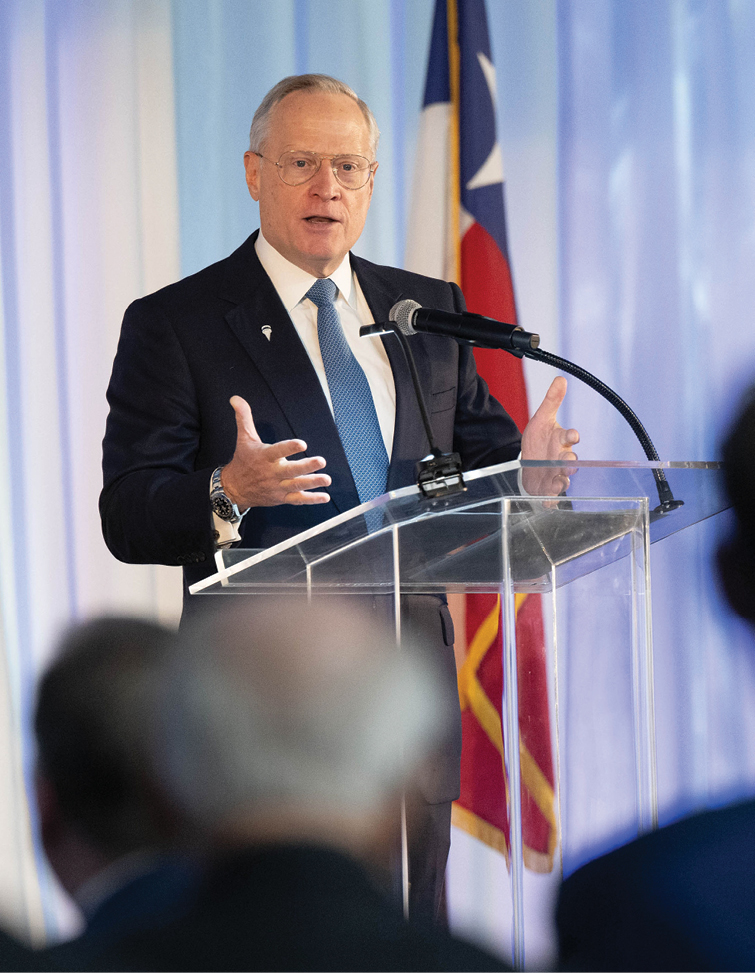 ore than 1,000 facility investment projects with a distribution/logistics component have landed in Texas since the pre-pandemic month of January 2020. They’ve no doubt helped many a Texan and other state residents get through the three tough years since by funneling materials and goods to our isolated workplaces, factories and doorsteps.

The numbers come from the Projects Database populated by the research team at Site Selection parent company Conway Data. No. 2 since that long-ago January is Illinois, most of whose 600 projects are in the bustling logistics megahub that is Chicagoland. Rounding out the top five are California, Georgia and Ohio (see Top 10 States chart).

Analyze the top states and metro areas for logistics and the reasons behind the investments begin to emerge: Facilities and occupancy flock to where the infrastructure assets are (ports, railroads, airports and highways) and to where the people are going. It’s no surprise that places in charge of moving goods multiply in high-performing locations familiar to Site Selection readers among our annual Governor’s Cup, Business Climate and Top Metros leaders. In other words, they’re getting warehouses because they’re getting a good bit of everything else too.

Behind those factors also lie the basic strategic motivators of goods movement, whether it be hub-and-spoke; regional hubs; going with one giant facility or a diversified collection of smaller ones; or deciding to be near ports with lower levels of labor issues.

Top Metros over the same span of time are led by Chicago once again, with three Texas metros — No. 2 DFW, No. 3 Houston and No. 9 Austin — finishing in the Top 10. Meanwhile, owing to a number of factors from Port of Savannah proximity to its international airport to its highway intersections, Atlanta jumps up to No. 4 just ahead of the port-adjacent metros of New York and Los Angeles.

That might make some scratch their heads, given Atlanta’s reputation for massive traffic congestion. But the Atlanta metro area is 25 counties, meaning warehouses, like people during a pandemic, can locate what used to be considered far afield and still be happy.

Fort Worth Alliance Airport in December saw an expansion unlike any of the many that have taken place on the 27,000-acre AllianceTexas development around it: Developer Hillwood, the City of Fort Worth and the Federal Aviation Administration officially recognized the airport’s name expansion to Perot Field Fort Worth Alliance Airport to honor the leader who always believed the airport “would be a global hub for the jobs of tomorrow,” a Hillwood release stated. 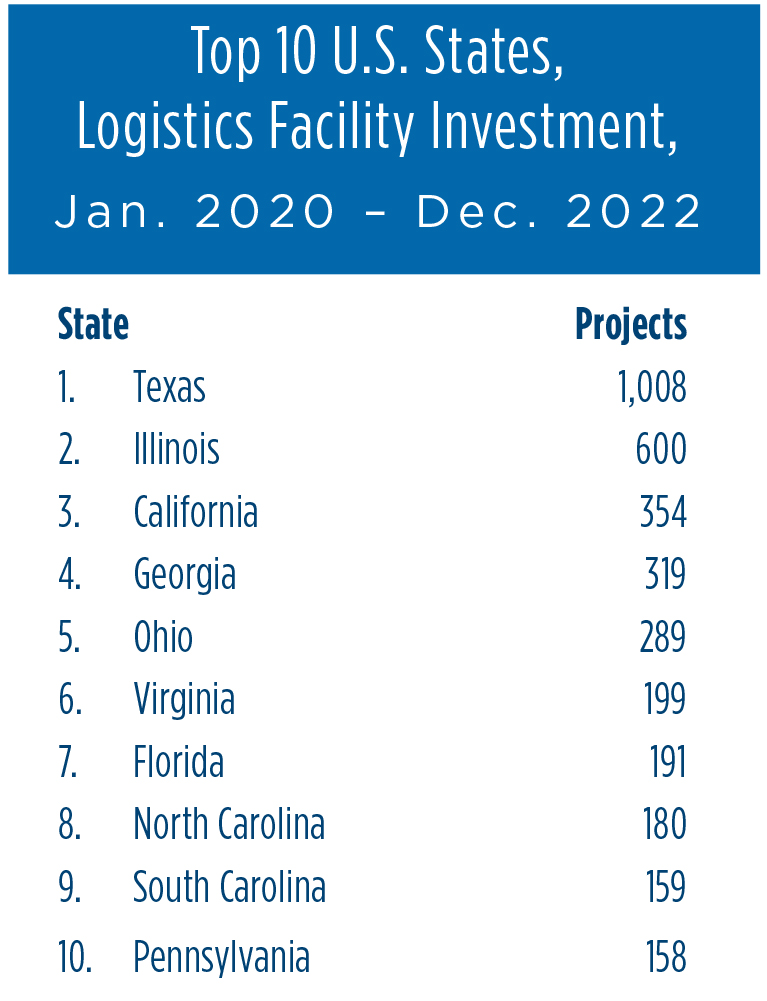 The airport opened on December 14, 1989, and was the first airport in the world designated specifically for industrial use, Hillwood says.

“My dad wholeheartedly believed Fort Worth Alliance Airport would be the centerpiece of an unprecedented jobs corridor in Texas,” said Ross Perot Jr., chairman of The Perot Group and Hillwood. “Investing in the northwest corner of the Dallas-Fort Worth metroplex mattered to him, and he immediately saw its potential. The airport became the catalyst for one of the great Texas business stories of our day, and we’re only halfway through. Development at AllianceTexas will continue on for at least another generation, which will help to ensure a future for our children and hopefully their children, too.”

Fort Worth Mayor Mattie Parker said the AllianceTexas development “has contributed to more than $100 billion in cumulative economic impact to the region since its inception, as well as more than $3.1 billion in paid property taxes, including $621.5 million to Fort Worth alone.” Among the projects landing at AllianceTexas is a distribution operation for Läderach Chocolatier Suisse, which will deliver fresh chocolate to all retail stores in the United States. The company has 350 employees with a footprint of 40 stores from coast to coast in the U.S. and Canada, along with e-commerce.

As for those jobs of tomorrow, they’re here today.

Not long before the renaming, Estonia-based Clevon, a global autonomous delivery company, performed its first U.S. autonomous delivery with CLEVON 1, which the company refers to as its “flagship multi-platform all-electric robot courier,” at the AllianceTexas Mobility Innovation Zone (MIZ) in Fort Worth. The exercise came less than three months after the company moved its U.S. headquarters to the MIZ. 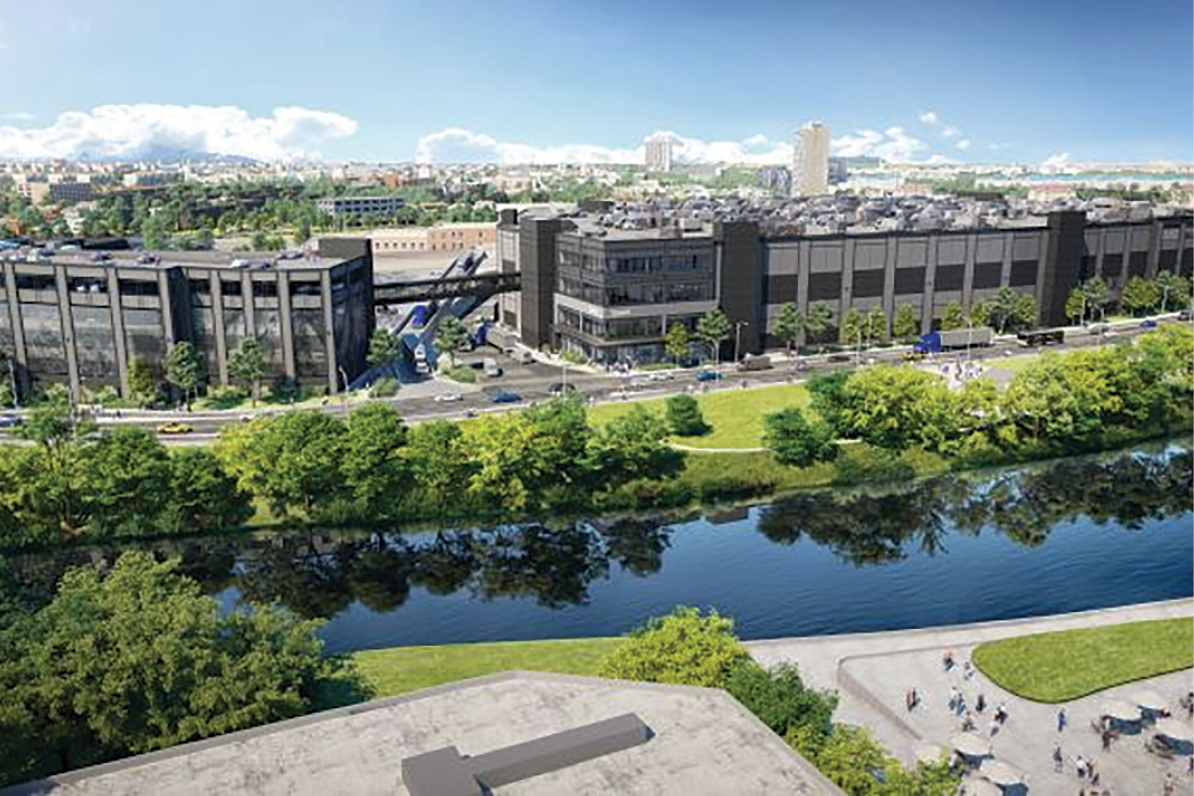 “With demand for autonomous last-mile delivery solutions booming on a global scale, Clevon is forever changing the way in which goods are transported, logging over 12,000 miles autonomously delivering goods abroad, and now here in the U.S.,” said Meelis Anton, Clevon’s U.S. chief operating officer. “Hillwood’s Mobility Innovation Zone platform is helping Clevon advance and commercialize our autonomous technology, and we look forward to continued deployments in the future.”

One trend that caught on in Japan years ago is finally finding its way onto North American shores: The multi-level distribution center has arrived.

In August Logistics Property Company closed on a $150 million construction loan for its two-level warehouse in Chicago known as 1237 West Division. The metro’s first multi-level warehouse, it will feature 1.2 million sq. ft. of logistics space and offer both rooftop parking and an adjacent five-story parking garage.

The facility is located on an 11.5-acre site adjacent to a four-way interchange at Division and Elston in Chicago’s near-north Goose Island neighborhood.

“With proximity to urban areas of Greater Vancouver, the multi-story distribution center provides infrastructure for last-mile delivery in a world where consumers have come to expect next-day and same-day delivery,” a Ware Malcomb release said of the Oxford Properties Group facility in Riverbend Business Park. “The Greater Vancouver Area is one of the world’s most land-constrained industrial markets, and demand for industrial space outpaces supply, thanks to the rise in e-commerce,” said Frank Di Roma, principal, Ware Malcomb. “We were pleased to solve considerable logistical and code-related challenges with this new building type and arrive at a design that maximizes industrial floor space.”

It also maximizes repurposed property. The Riverbend site used to be home to a paperboard milling operation and a 14-acre landfill, was purchased by Oxford in 2011, and earned Oxford the 2019 City of Burnaby Environmental Award for its environmentally conscious redevelopment.

“The U.S. industrial market is continuing to see robust demand, and companies are adding warehouse and distribution space to protect their inventories, diversify their supply chains and process growing e-commerce sales,” said John Morris, CBRE president of Industrial & Logistics in the Americas, on the November release of the company’s latest Industrial Occupier Survey. “Even with a more challenging economic backdrop, we’re still seeing that companies are interested in expanding their footprints in the short-term.”

Of the survey’s 100 U.S.-based respondents, 64% overall and 81% of third-party logistics (3PL) companies are planning to expand their real estate footprint over the course of the next three years, CBRE reported. “In addition to 3PLs, food and beverage (75%) and building materials and construction (75%) companies also intend to expand their real estate footprints in the face of supply chain disruptions, labor shortages and high occupancy costs.”

In keeping with the rankings charts featured here, markets most favored for expansion in the next one to two years are in the Southeast, Southwest and Midwest, CBRE said. As for specs, occupiers identified the following features as critically important when selecting a facility or site: 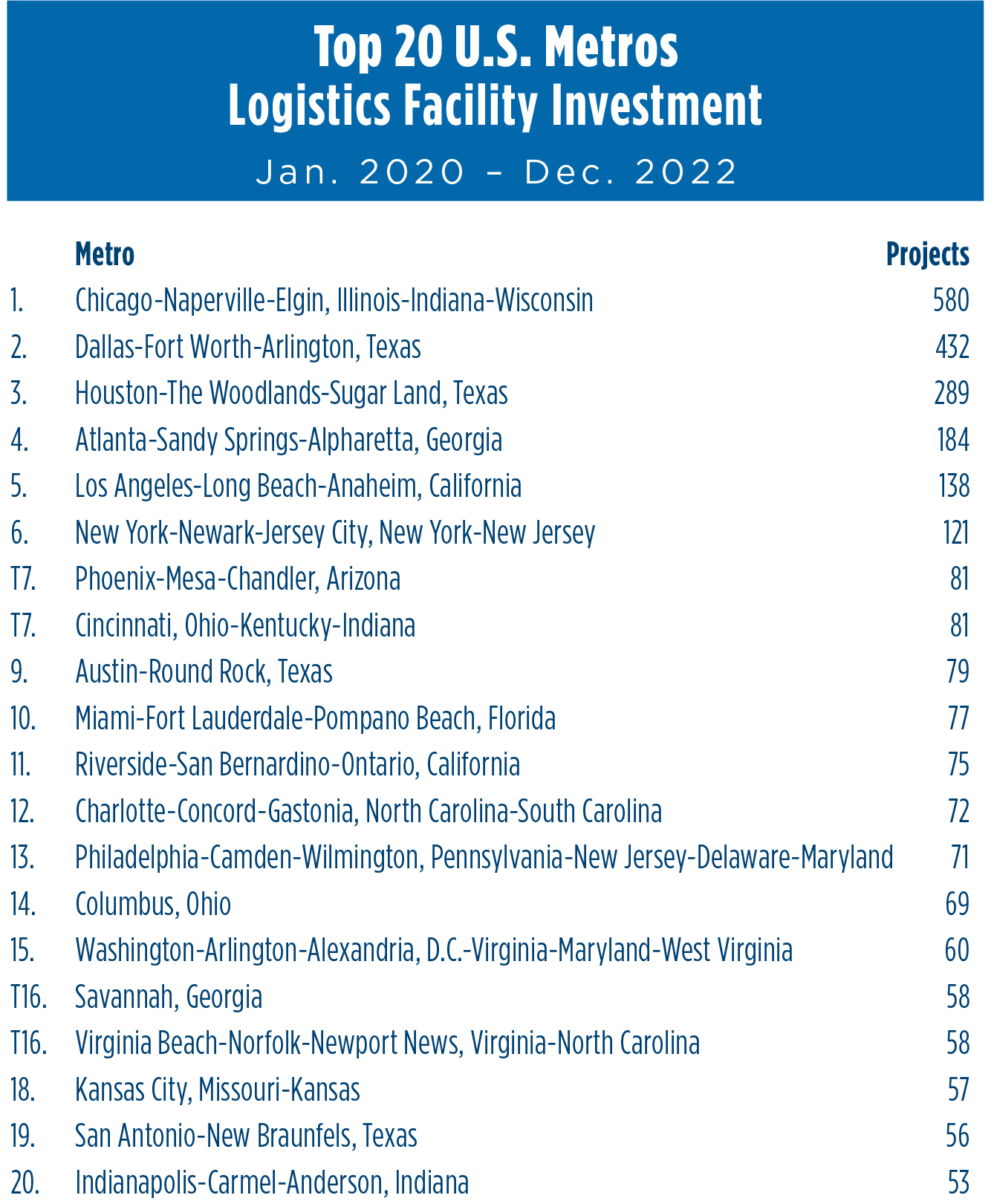 “Forecasting the Future of Colossal Warehouse Demand” is the title of a new report from Transwestern. And yes, the “colossal” describes the demand and not necessarily the warehouses.

“Occupancy growth has outpaced delivery of new inventory in 10 of the past 12 years,” the report states, “and as of mid-year 2022, tenants have absorbed nearly 4.7 billion sq. ft. (BSF) of industrial space in the U.S. during that timeframe, outpacing the 3.5 BSF of completed industrial real estate development.” Among the report’s findings: 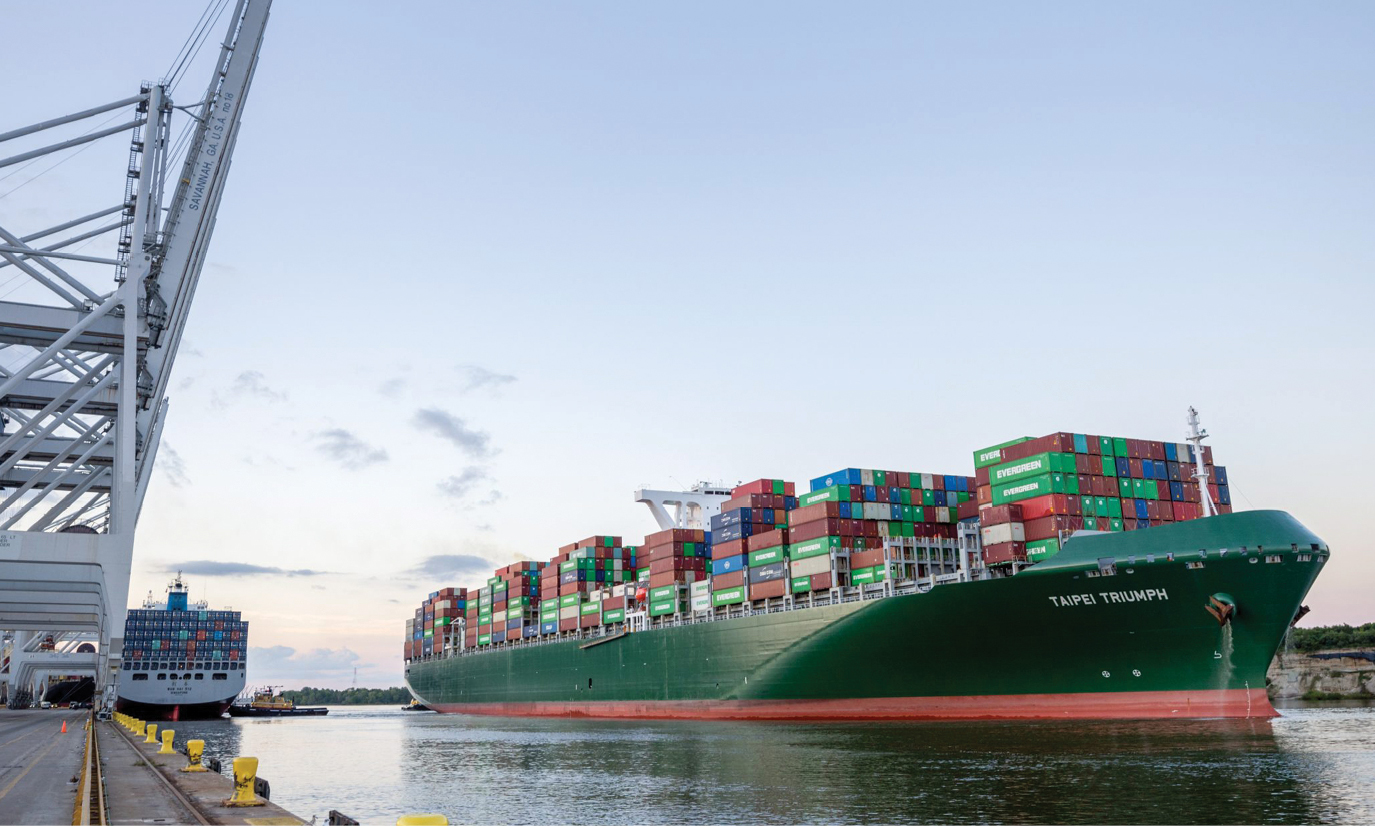 The Port of Savannah not only has influenced logistics activity in its region, but throughout Georgia.
Photo courtesy of Georgia Ports Authority