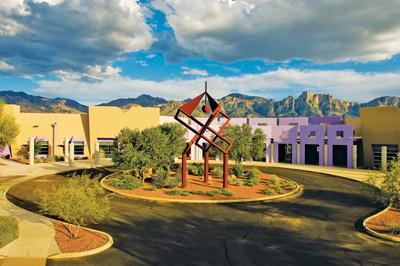 After announcing in 2009 its plans to more than double its real estate footprint in Oro Valley, Ariz., over the forthcoming decade, Roche Group company Ventana Medical Systems in October announced it would invest approximately $180 million and add up to 500 jobs over the next five years at the site just north of Tucson.
Ryan Mihalyi (c)2008 520-400-4393 mihalyiphoto.com All Rights Reserved.

Roche continues to double down in Southern Arizona.

any the corporate acquisition comes with the promise of continuing investment in the acquired party. All too often that promise ends up unkept or watered down.

But such is not the case in the Tucson-area community of Oro Valley, where in October, two years after acquiring tissue diagnostic firm Ventana Medical Systems, Switzerland's Roche Group announced it would invest at least $180 million over the next five years, creating up to 500 new jobs with an average salary off $75,000. That wage is equal to 175 percent of Pima County's average wages in spring 2009.

The decision concluded a national site analysis that included other locations where Roche already has a presence: Indianapolis, Southern California and Northern New Jersey.

According to Joe Snell, president of Tucson Regional Economic Opportunities (TREO), the process unfolded over 11 months. The end result is expected to have an economic impact of $600 million, Snell told the TREO annual luncheon audience in October.

Roche plans to build new facilities on part of the approximately 60 acres (24 hectares) it owns at Innovation Park, across the street from its existing operation. The new jobs, spread among science, administration and manufacturing, will bring Ventana's total Oro Valley payroll to more than 1,400.

Ventana originally was launched in 1985 by former University of Arizona professor and pathologist Thomas Grogan. The firm pioneered an automated method of cell staining for cancer testing and personalized treatment. Today, as the global research site of Roche Tissue Diagnostics, it is among the world's leading developers and manufacturers of automated tissue-based diagnostic systems and tests focused on the detection of cancer.

As documented in Site Selection's September 2009 interview with Ventana facilities director Gregg Forszt, the company is pursuing a master plan that looks toward 2020, going from six buildings in fall 2009 to as many as 14 buildings eventually. Ultimately the company would more than double its real estate footprint over the next decade. Last year's ongoing expansion activity included a 115,000-sq.-ft. (10,680-sq.-m.) R&D facility, a parking garage and a central utility plant.

These Are the Breaks

The incentives package for the project totals nearly $14 million, including $8.2 million in property tax waivers from Pima County, $2 million in stimulus funds for training via the State of Arizona's Quality Jobs program, and Oro Valley's rebate of up to $1 million in infrastructure development impact fees.

The property tax waiver from the county was approved by county supervisors in late October, and allows Ventana, by state law, to pay taxes based on 5 percent of the assessed value, as opposed to the normal business rate of 21 percent. The taxes waived could reach $10 million if the job creation target surpasses projections and reaches as high as 730. The waiver is contingent on federal approval of Ventana's application for Foreign Trade Zone sub-zone status.

An application for reclassification of FTZ No. 174 under the alternative site framework, submitted by TREO in October 2009, was approved in June 2010 by the U.S. Foreign-Trade Zones Board. Such reclassifications allow for the naming of magnet sites with a named service area, which in TREO's case is the whole of Pima County.

In an October 15 memo from Pima County Deputy Administrator Hank Atha to Pima County Administrator C.H. Huckelberry, Atha outlines all aspects of the agreement, noting that Ventana's investment should provide an annual average of $348,000 in revenue over the next decade, despite the reduction in levy caused by the FTZ reclassification. The payment-in-lieu-of-taxes (PILOT) in the agreement protects Pima's annual real property revenue from current operations ($204,817 in 2010) and at least $100,000 of annual personal property revenue from current operations.

According to an attached Oct. 12 memo from Huckelberry to the Board of Supervisors, Ventana's outlay over the next five years could be as high as $192 million. According to cost/benefit analysis by the county's finance and risk management department, the property tax relief to Ventana vs. incremental tax revenue from new employees purchasing homes is "essentially a break-even proposition," says Huckelberry, who recommends using this first-ever application of FTZ commercial property tax relief by an existing company as a model from which to formulate new minimum-requirement policies for future agreements.

A decade after its germination, the 535-acre (217-hectare) Innovation Park is living up to its name as a growth medium for biomedical business. Sanofi-Aventis also operates a major research operation there. The University of Arizona operates a commercialization center called the Bio5 Institute, and the Critical Path Institute also resides at the park, helping smooth the way for medical innovations to get to the people who need them faster.

The area's biotech momentum is increasing on the academic side too, said University of Arizona Vice President for Research, Graduate Studies, and Economic Development Leslie Tolbert, Ph.D., in an interview in early October, noting the school's recent purchase of a former Sanofi building.

"Sanofi actually moved out of this building as they created their wonderful new facility," said Tolbert, a neurobiology professor. "We bought it for an extremely good price. It's very good for drug development. So we're moving some of our faculty into this facility. They already collaborate with Sanofi — one has a 25- to 30-year history with them. They now will increase collaborations."

Research areas include small molecules and particular cellular processes and disease areas. Tolbert said the idea is to work toward "the handoff."

Also in the building is 27,000 sq. ft. (2,508 sq. m.) of incubator space, where small companies that want to be part of the two companies' ecosystem can locate.

'It's just enough space for a few labs with a real focus in this area, to do high-throughput development and screening," said Tolbert. "One investigator is a colon cancer investigator who has a drug in clinical trials that is preventive. We're especially interested in the preventive side."

A new 501(c)(3) will put an entrepreneur in residence at the incubator's location. "So there is a whole continuum happening in one place," said Tolbert. "And both companies are happy to have us there in that part of town."

Not as happy as the town named after the golden sunlight is to have both companies shining bright in its backyard. 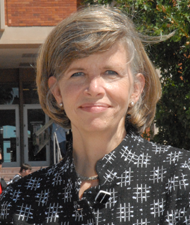