Merck On the Make 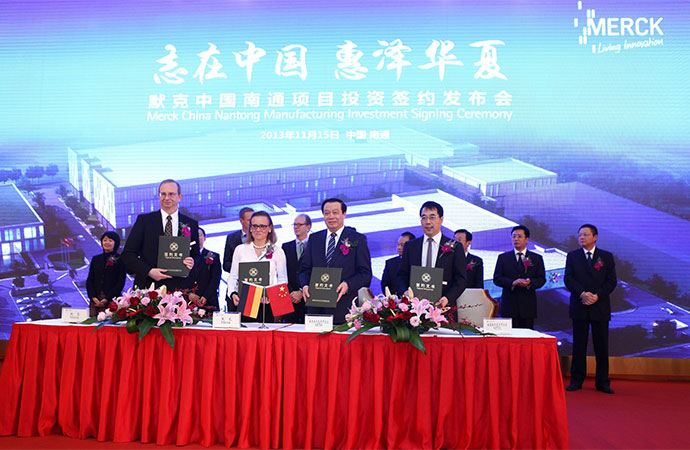 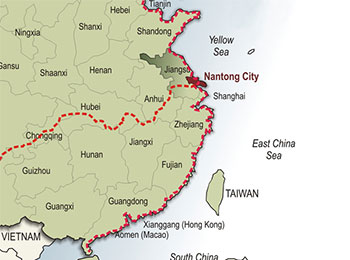 t’s been a relatively quiet year for facility investment projects from Merck KGaA, the life sciences and chemical firm that employs more than 38,000 around the world and reported 2012 revenues of more than US$15 billion. But the past fortnight has been something else entirely.

“This further investment in China reflects Merck’s long-term commitment to the country where our group has been present for 80 years,” said Belén Garijo, president and CEO of Merck Serono, the biopharmaceutical division of Merck. “We are proud to be one of the first multinational companies investing in a local site focused on the manufacturing of medicines referenced in China’s essential drug list, and serve the country’s expanding health-care needs in the areas of diabetes, cardiovascular diseases and thyroid disorders, by bringing high-quality medicines made in China to a broader population, in full alignment with the Chinese government’s goal to increase access to quality products.”

“This new facility will become Merck Serono’s second largest pharmaceutical manufacturing site in the world and will help ensure that our medicines will always be available to patients who rely on them, which is a key priority for Merck Serono,” said Allan Gabor, general manager and managing director of Merck Serono in China. “With our research center, our development capabilities, our commercial presence and this new manufacturing facility, we are building for the future in China by investing across our value chain.”

Over the past five years only, investments for the Merck Serono division included:

Recent investments for other divisions of the Merck group include the Merck Millipore Biopharmaceutical Technical and Training Centre and a soon to be opened Liquid Crystals manufacturing facility, both located in Shanghai.

In April, the separate company Merck & Co., known outside the US as Merck Sharp and Dohme (MSD), opened a $120-million, 75,000-sq.-m. (807,320-sq.-ft.) manufacturing complex in Hangzhou, China, in the Hangzhou Economic and Technology Area (HEDA). The facility will package Merck medicines for China and the Asia Pacific region and will become a critical part of Merck’s global supply chain, an integrated, interdependent network of 72 Merck facilities that supply medicines and vaccines to more than 140 countries.

MSD, which built its first China plant in Hangzhou in 1994, also has an R&D Center in Beijing, three manufacturing facilities throughout the country and a marketing and sales organization headquartered in Shanghai, and employs more than 5,000 employees in China. In 2011, MSD established its Asia R&D headquarters in Beijing and committed to invest more than US$1.5 billion in R&D in China over the next five years.

Worldwide there are two separate companies that bear the name “Merck”: the original Merck KGaA from Darmstadt, Germany (the oldest pharmaceutical and chemical company in the world) and the pharmaceutical company Merck & Co. in the United States. In 1917 the U.S. subsidiary Merck & Co. was expropriated and has been an independent company ever since.

“The rights to the name and trademark MERCK in North America (USA and Canada) lie with Merck & Co., the former U.S. subsidiary of Merck, whereas Merck KGaA operates in North America under the umbrella brand EMD,” says the German firm in an attempt at clarification. “In the rest of the world, Merck KGaA owns the rights to the Merck name and trademark.”

Got it? Okay, let’s proceed.

Island in the Storm

On the same day as the Nantong announcement, the Puerto Rico Industrial Development Company (PRIDCO) reaffirmed its strategic vision to protect and retain the industrial base after Merck’s announcement that it will redesign its Puerto Rico manufacturing capabilities to focus on new product development and new product launches.

“Over the past years, Merck has invested more than $100 million in the Las Piedras facility to transform it in a strategic high-technology location for the development and launch of new products,” read a PRIDCO release. "Today Merck has publicly confirmed its future plans in Puerto Rico, and validates that it will maintain their operations on the island with a solid investment," said PRIDCO Executive Director Antonio L. Medina Comas.

According to the information provided by Merck to PRIDCO, as part of a comprehensive review of all of its manufacturing operations, the Arecibo site will continue until 2016, then will be consolidated with Las Piedras. In addition, by the end of 2014, active ingredient production will be suspended in Barceloneta, where formulation and packaging operations will continue.

"Given the huge investment that Merck has made in Puerto Rico to consolidate some of its operations in Las Piedras, we are now certain that one of the world's leading pharmaceutical companies will maintain its operations on the island," said Medina Comas. He added that the island remains a competitive destination for biopharmaceutical companies, most recently Eli Lilly & Co., which just announced a $200-million investment earlier this month.

"During its 65 years in Puerto Rico, Merck has been committed to innovation. That commitment continues as we further develop Las Piedras as a strategic site to develop and bring new products to the market and to patients around the world," said Cesar Simich, M.D., vice president and managing director, Puerto Rico and the Caribbean, Merck.

PRIDCO went further in clarifying that the consolidation by Merck was not related to performance or compliance issues at the Barceloneta or Arecibo sites. “On the contrary, said PRIDCO, the locations have been recognized for excellence in manufacturing. PRIDCO will pursue development alternatives for the Arecibo site seeking to attract other investors by 2016.

Finally, just last week on Nov. 19, Merck announced it plans to develop its global headquarters in Darmstadt, Germany, “into a contemporary, attractive global headquarters in order to sustainably strengthen its innovative power and attractiveness.” The plan is part of the Group’s “Fit for 2018” growth program, which Merck has instituted to become more efficient and innovative by the time of the 350th anniversary of its Darmstadt site, where around 8,800 people work.

“At the heart of the planning is an innovation center, which is intended to become a hub of innovative strength at Merck,” said the company. “This building is to offer employees from all divisions and units space for interdisciplinary collaboration for the duration of a project.”

Other features include an adjacent employee restaurant, and more openness to customers and the general public, including a new visitors' center on Frankfurter Strasse, which will house conference rooms for customers and applicants as well as a restaurant for guests.

The extensive redesign of the site will also involve urban redevelopment activities. Merck KGaA is currently engaged in an intensive dialogue with the city of Darmstadt on how to upgrade Frankfurter Strasse into an avenue. The planned visitors' center on one side and the innovation center on the opposite side of the street are to be linked by a central area with the Pützer Tower, a listed historic building, as its central landmark. A public meeting about the proposed project took place on Tuesday, Nov. 26. 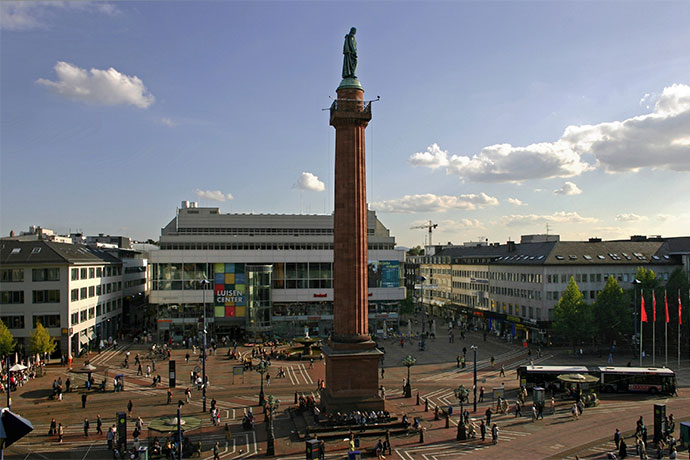 Luisenplatz is the city center of Darmstadt, Germany, where Merck KGaA has been headquartered since 1668.
Photo by Alex Deppert courtesy of Discover Darmstadt