Growth from a pair of shoe makers adds to
the footprint of Portland's athletic and outdoor sector. 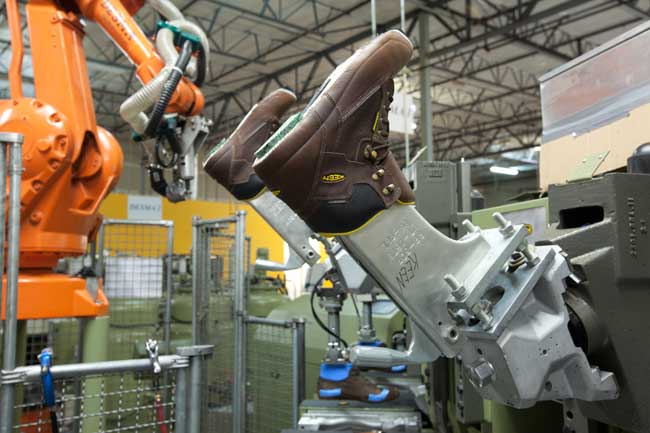 In Portland, Ore., there's a burgeoning sub-cluster of footwear companies, now more than two dozen strong. Part of a larger and ever expanding cluster of athletic and outdoor (A&O) companies, this growth has turned the region into the North American go-to industry hub.

Now, two more firms are swelling the ranks. KEEN, which relocated its headquarters from Alameda, Calif., to North Portland in 2006, has just expanded, opening a technologically advanced, robotics-driven factory. And Hi-Tec, which started life across the Atlantic as a manufacturer of squash shoes, recently shifted its North American headquarters to Portland from Modesto, Calif.

The Lure of Portland

The cluster is a natural fit for a region that boasts one of the fittest and "outdoorsiest: demographics in the country. Everyone, it seems, hikes, climbs, runs and bikes. And they need gear.

Still, the lure of Portland isn't really about being close to the end customer. After all, there are outdoor enthusiasts everywhere.

Instead, it's about the talent. The people who are the hikers, kayakers, fly-fishers, runners and the like know what they are looking for in their gear. This knowledge, deployed on behalf of new product development, can help firms deliver products that their customers want to buy.

The Portland talent base includes highly skilled professionals who are so passionate about the outdoors that they organize their schedules around their ability to pursue their passion. It's enmeshed in their lifestyle and their value system, an intangible value-add for firms in this industry, who can put this passion to work for them.

It's what the KEEN folks call "the HybridLife." A blurring of the lines between where work ends and leisure time begins. A seamless melding of work and life so there's less of a conscious balancing act.

Jennifer Nolfi, A&O team manager for the Portland Development Commission, says that in addition to happy workers, there's a practical, bottom-line benefit to this hybrid life notion. "When R&D needs to product test a new hiking shoe, the R&D project team - expert hikers themselves - can put on the shoe, step outside, and go on a hike, through the living lab of Portland's varied topography."

This "living lab" was a key reason that KEEN made its original decision to move from Alameda in 2006.

"The leadership of KEEN decided to relocate the company to Portland because it offers easy access to the outdoors and a great quality of life," says KEEN CEO and president James Curleigh. "Here our employees can live and breathe the HybridLife to its fullest."

KEEN's recent decision to build a factory in Portland aligns with this philosophy, although it does seem to contradict the conventional wisdom about the advantages of off-shore manufacturing.

According to Curleigh, the company purposely challenged the conventional wisdom as it weighed its location options.

In considering these questions, the company concluded that producing footwear in the U.S. could make sense. "Our new factory was going to be more than just a place where we manufacture shoes. We realized that we had the opportunity to use it as a prototype and sample facility, a quality testing facility, a learning center and a flexible-capacity factory. This was an incredibly compelling argument," he notes.

Curleigh points to other benefits of the company's Portland location decision, including significant logistics efficiencies enabled by being thousands of miles closer to the company's customer base than Asian factories. Building a factory locally also aligns with KEEN's strategic focus on environmental sustainability, reducing its overall carbon footprint through proximity to customers, through investment in energy-efficient machinery and by pioneering new direct-injection techniques to use fewer materials and fewer adhesives.

Hi-Tec had different reasons for its move from California.

"Our customers wouldn't come to Modesto," says Hi-Tec's North America General Manager Bill Berta bluntly. "It was hard to get in and out of the city. It was off the beaten track and buyers wouldn't come visit us."

Portland was a logical choice, because Hi-Tec's customers are also customers of the other A&O firms with a presence there. "Portland is a strategic location in relation to other companies in the industry," Berta says.

Finding top talent was a factor as well, according to Berta. "While there are certainly successful companies outside the two main footwear hubs of Boston and Portland, they all struggle to recruit industry talent if they aren't in one of these two markets."

Hi-Tec's move to a North American industry hub is part of the company's new global alignment strategy, which also includes a headquarters shift out of London to Amsterdam. Explains Berta: "Amsterdam is a global shoe hub, like Boston and Portland are, and we need to be where the heart of the industry is."

For future manufacturing needs, Hi-Tec likely would look outside the U.S.

The company would not be alone. KEEN's recent decision notwithstanding, and despite recent industry buzz about on-shoring, estimates suggest that only about 3 percent of shoe manufacturing takes place on American soil.

"Working footwear is not highly desirable, even in a bad economy, even when there's lots of people looking for jobs," Berta notes.

Hi-Tec shuttered a factory in Maine a number of years ago, because of such staffing issues. "It is tedious, repetitive work and it was tough to find people."

Berta adds that the American regulatory environment is not conducive to the supply chain needs of footwear manufacturers. "The Environmental Protection Agency is never going to allow a new leather tannery - unless there is some remarkable new technology to reduce the pollution."

The U.S. also lacks the skills, expertise and supply chain capabilities for footwear manufacturing, Berta says. "When you decide to shift shoe production, it's not just the shoe factory itself. There's a lot that has to move. There are the tanneries, the glue factories, the suppliers of large, specialized equipment, plus a highly trained production staff - you can't find that in America."

Exactly where in the world footwear manufacturers will set up future production facilities remains a bit unclear, however. China, long a global hotspot for shoe manufacturers, is beginning to lose its luster, although many firms still see potential in this massive nation. Nike, for instance, has just opened a 650,000-sq.-ft. (60,385-sq.-m.) logistics center in Jiangsu.

"After years of being consistent and predictable, China is neither right now," Berta says. "Just in the last three months, we've seen significant price increases. Labor costs are rising rapidly." All indicators point to the trend continuing, he adds.

Other East Asian nations, like Vietnam, have a tradition of footwear manufacturing, but lack the scale and capacity to meet a massive influx of demand if manufacturing starts to move out of China.

Berta says that his company is keeping an eye on other parts of the world, where costs are lower and where there is local footwear expertise. "Eventually, footwear will transition out of China," he says. "Our company is looking toward India and Indonesia."

Back in Portland, the industry cluster continues to grow, with a long, proud history that started with 19th century outfitters for the logging industry, took root with the 1938 founding of Columbia Sportswear and blossomed with the 1972 birth of Nike and 1992 establishment of Adidas North America.

Today, the Portland area is home to more than 700 firms in the A&O industry - the highest concentration of such firms in the country, many of them staffed with Nike alumni. Among the firms that have relocated to Portland in recent years: Merrell, Yakima, Icebreaker and Arena. Others with a longtime Portland presence, such as Danner/LaCrosse, have grown as well.

And Nike itself continues to expand. The company recently took 189,385 sq. ft. (17,595 sq. m.) of new office space to house a growing IT department, leasing surplus space on the nearby Beaverton campus of instrumentation supplier Tektronix.

According to the Portland Development Commission's Jennifer Nolfi, Tektronix's presence is part of the A&O crossover effect - the region is home to a growing cluster of instrumentation, test equipment and manufacturing technology firms, which help athletic and outdoor gear companies design ever more technologically advanced products for improved performance.

In addition, there's a growing presence of professional and creative services firms such as advertising agencies, catalogue studios, software developers, Web designers and on-line e-tailers with expertise in apparel and footwear merchandising.

As more companies settle in Portland, the lure of the region becomes even stronger, particularly for international firms. Chinese athletic shoe company Li-Ning opened a North American base in Portland in January. In July, Italian hiking shoe firm Garmont announced plans to relocate its North American headquarters from Vermont to Portland. And U.K. cycling apparel company Rapha also is on the hunt for a Portland location, according to Nolfi.

As they all arrive, they can join other A&O companies in getting just as in tune with Portland's environmental ethos as they are with its outdoors vibe.

Earlier this week, the Portland Development Commission (PDC) and Outdoor Industry Association (OIA) announced that Adidas, Columbia Sportswear, Icebreaker, KEEN, and Korkers have been selected to participate in the cohort program, which will provide customized training and resources around testing the next version of the OIA Eco Index, an environmental impact assessment tool providing a common language and framework to benchmark and measure product-level sustainability throughout the supply chain.

The program is funded by a grant from PDC, which is being matched by OIA.

"PDC has supported the Eco Index from the very beginning, as a natural fit with Portland's leadership in both sustainability and the A&O cluster," said Nolfi. 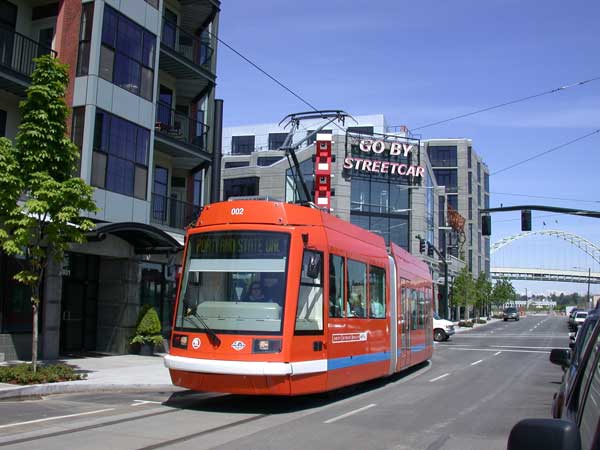 Nearly as cool as taking the streetcar through Portland’s Pearl District is locomoting in shoes made by a Portland-based shoe company. Hi-Tec recently relocated its North American headquarters to the Pearl District from Modesto, Calif.
Photo courtesy of Portland Development Commission