Redevelopment opportunities lurk behind
the looming closure of hundreds of Postal Service properties. 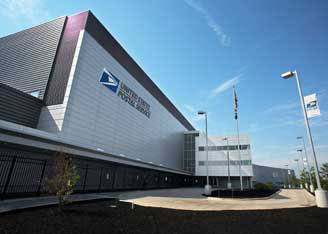 The U.S. Postal Service is consolidating 224 mail processing centers located in 45 states across the country.
Photo courtesy of USPS
I 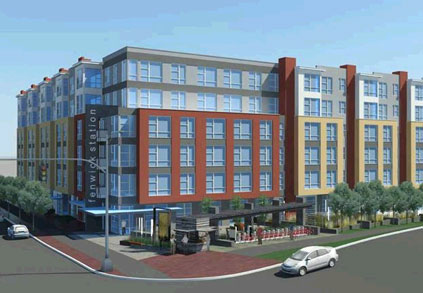 If your company had the chance to save $8.1 billion through realignment of a rapidly obsolete U.S. processing, retail and delivery network, would you jump at it?

That's what the U.S. Postal Service (USPS) is doing, part of a larger cost reduction plan that aims to save $20 billion in operating costs by 2015.

Americans routinely praise red tape reduction and increased efficiency by any government agency. This particular plan however - which, barring Congressional or Presidential intervention, will kick into effect on May 19 - strikes at many a heartstring: grandparents who were postmasters; Saturday chats at the mailbox with your mailman; charming buildings as central to defining small-town ethos as the already vanished service stations, dime stores and soda fountains.

But behind the post office closings now creating so much nostalgia-tinged angst lies another wave of USPS facility consolidations that simultaneously represent job loss and, in some cases, real estate opportunity.

Out of a total network of 487 mail processing centers, 224 in 45 states will close in whole or in part, the Post Office announced Feb. 23 after nearly six months of study. The Post Office projects the reduction of 30,000 full-time positions and 5,000 non-career positions with the Area Mail Processing (AMP) closings, but is quick to point out that closing plants doesn't necessarily mean that every employee loses his or her job.

"The Postal Service has a proven track record of working with affected employees to find opportunities at other locations," proclaims a USPS fact sheet. "In fact, the Postal Service reduced 140,000 positions in the last four years without laying off a single career employee."

The more hard-core takeover-and-remake artists out there might view such language as a sign of replacing one set of inefficiencies with another. But physical mail is nothing if not a human artifact, and it's not that simple to remove or reassign the many sets of hands that touch it.

"As a responsible employer, we are working with the unions and management associations to work through this issue," say the USPS. "If we move forward, we will follow the requirements of the collective bargaining agreements where they apply, and all other requirements of the law."

The Postal Service receives no tax dollars for operating expenses. It reports annual revenue of more than $65 billion and delivers nearly 40 percent of the world's mail, to some 151 million residences, businesses and Post Office Boxes. If it were a private sector company, the U.S. Postal Service would rank 35th in the 2011 Fortune 500.

Drop Me A Line

No one will deny the powerful personal message that a hand-written or even typed letter sends to its recipient. But as your email inbox and queue of texts and pings will tell you, we're simply not writing and sending those notes like we used to: First-Class mail has dropped in volume by 25 percent since 2006.

A compelling graph in the USPS business plan released in February shows First-Class mail growth and a rise in the nation's real GDP index humming along in unison from about 1975 until 1995, when the letter line abruptly split off and started dropping like a vital sign in crisis, showing a drop of 45 billion pieces of mail between 2000 and 2011. That's a tough blow to take from an area of business that even in 2011 still accounted for nearly half of all USPS revenue.

The decline has left "a mail mix that generates far less revenue than it costs to sustain postal operations," explains the USPS. "The dramatic decline in mail volume has resulted in an enormous amount of excess capacity within the network, creating significant opportunity for consolidation."

Such opportunities are not a new area of study for the Post Office, which says it "continually assesses its infrastructure, network, logistics capabilities and mail processing operations and constantly makes changes designed to improve efficiencies by making better use of space, staffing, equipment and transportation."

But the slowdown of mail combined with the speed-up of healthcare liabilities created a must-act scenario. The Postal Service lost $3.3 billion last quarter, and without substantial moves or a literal Act of Congress could incur annual losses as great as $18.2 billion by 2015, and accumulate a total debt of $92 billion by 2016. Among the major legislative reforms recommended, the most significant include enabling the Postal Service to provide employee health benefits independent of federal programs ($7.1 billion annual cost reduction), and transitioning to a national five-day delivery schedule ($2.7 billion annual cost reduction).

The full plan - based on business model analysis by McKinsey & Company and revenue projections from the Boston Consulting Group, and then independently reviewed by investment bank Evercore Partners - provides for full repayment of $12.9 billion in debt currently owed to the U.S. Treasury. But all components must be pursued concurrently … and quickly.

The network sortation and transportation part of the business plan expects to realize $4.1 billion in savings by 2016.

The AMP closings, while tending toward a demographic curve, don't necessarily hew to that line. Fourteen of the 224 dead centers walking are in California, 13 are in Georgia, 12 apiece are in New York in Pennsylvania, nine apiece are in Kentucky, Ohio and Texas.

The Postal Service said its study took into account "projected savings, service issues, transportation and logistic networks, capacity within processing plant, amount of required capacity necessary, equipment usage and maximizing capacity across the board" in deciding which facilities to close.

Sorting the AMP closure data in various ways can produce a demographic and logistics picture that is as conflicted as it is indicative. In some cases, perhaps, the dire occasion is being used to play catch-up in some areas that have been over-served or under-utilized.

Only a handful of cities, for instance, are losing more than one AMP center: Petaluma, Calif.; Waco, Texas; Savannah, Ga.; Norfolk, Va.; Saginaw, Mich.; Fayetteville and Kinston, N.C.; and Binghamton, N.Y. But all of those communities have significant points in their favor in terms of economic development, led by port and military ties.

A look at the communities gaining AMP activity, while allowing for the multifaceted nature of the USPS study, also shows some signs of where demographics and logistical infrastructure work to the Postal Service's advantage. The list frequently parallels the strong logistics performers in past analyses of private-sector logistics location choice performed by Site Selection and other firms. In other cases it may reflect a demographic circling of the wagons:

For example, Indianapolis is gaining from six different consolidations, as are Albuquerque, N.M.; Pittsburgh, Pa.; and the combined centers of Atlanta and its northern suburb of Duluth. Seattle, Wash.; Portland, Ore.; Evansville, Ind.; Columbus, Ohio; and Boston are taking in activity from five centers.

There is also a list of 35 AMP centers that were studied for consolidation but spared the axe. Their number includes three in Texas (McAllen, Beaumont and Austin) and two each in Arkansas (Fayetteville and Little Rock); Iowa (Cedar Rapids and Waterloo); Illinois (Champaign and Chicago); Nebraska (North Platte and Omaha); New Hampshire (Manchester and Nashua); and New York (Bethpage and Garden City).

The USPS is a self-financing federal entity that stands apart. To whom does it turn when it needs delivery of real estate disposition services?

"The Postal Service's property is ours alone," says USPS spokesperson Sue Brennan. In other words, it doesn't belong to GSA and never did. Asked if other federal agencies have explored reuse of postal facilities now coming onto the market, she says, "Other government agencies could have purchased our property for fair market value."

Instead the task falls to CBRE, which signed an agreement with the USPS last year and features public websites featuring separate listings of USPS building and land properties at http://uspspropertiesforsale.com/.

As of March 2, the database of USPS properties maintained by CBRE showed 76 buildings. It also showed 33 land parcels scattered across the nation, including a 4.6-acre (1.8-hectare) parcel located right at the entrance to the Dover Industrial Park in Dover, Pa.

In the meantime, there are examples already out there in the world of postal sites remade and reimagined.

Their charge is to imagine a vision for creating an identity for a new downtown district in Houston - through creating a practical and workable scheme for the best use of approximately 16.3 acres (6.6 hectares) owned by the USPS, one of several hundred Postal Service properties put up for sale in 2009. The property is considered by many stakeholders to be a key site to reconnect the Theater District, the Historic District, and the greater downtown to the Buffalo Bayou. Some of their visions incorporate elements that some might call quaint reconstructions, or replicas, of such nostalgic locations as the post office or the corner grocery.

Other projects have already made headway in the real world:

Brandywine Realty Trust invested $260 million in the renovation of the 30th Street Station building in Philadelphia, expected to house as many as 5,000 IRS employees.

"This property is a gateway location in the Silver Spring Central Business District, with great access and visibility," said Sarah Davidson, a partner at Insight. "Our residents will ride on Metro and walk to restaurants, entertainment and major downtown employers."

Could other opportunities be lurking in the USPS portfolio? Quite possibly. But ambitious redevelopers will need to heed two particular questions and answers already provided by the Postal Service:

Q: Can I have my attorney draft a Purchase and Sale Agreement?

A: No, USPS has a standardized contract that contains non-negotiable terms and conditions required by USPS.

Q: Will USPS consider financing the purchase of a property?

A: No. All sales require cash at closing. Purchaser will be responsible for securing funding.

As part of an Urban Land Institute competition, a team from Columbia University has envisioned redevelopment of an existing USPS property in downtown Houston as "The Post," which maintains the existing USPS office building and converts it into a center for artists, workshops, and incubator office space. It also retains a portion of a USPS distribution facility for renovation as a small-vendor produce market.
Image courtesy of ULI