Looking deep into the universe requires a rather large
earthbound footprint, and a whole lot of quiet. 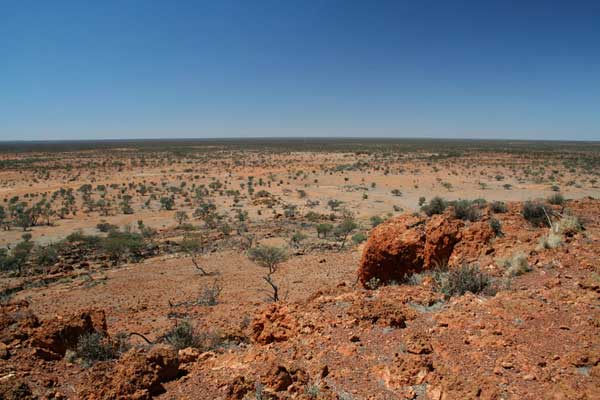 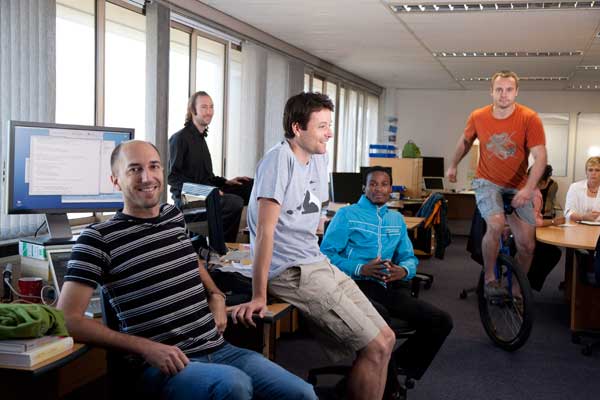 Modern ska is a hard-driving mix of reggae and calypso with a dash of punk, an infectious offbeat and horns aplenty.

In the scientific world, SKA is the Square Kilometer Array, a €1.5-billion (US$2.2-billion) global science project to build the world's largest and most sensitive radio telescope. Two finalist sites are sounding their horns to lure the mega-project, but one of the big things it requires is a swath of silence.

At the 2011 International SKA Forum in Banff, Alberta, Canada, in early July, the SKA's founding board unveiled its site selection process and timeline for the project, which has short-listed sites in South Africa-Indian Ocean Islands and Australia-New Zealand.

Why such large territories, you ask? Well, the square kilometer refers merely to the active collecting area of the various dishes and receptors that make up the SKA [www.skatelescope.org]. The required layout of that equipment, however, means ultimate distances of 3,000 km. (1,865 miles) from the center of the telescope. Just as impressive are the data speeds that are oddly enhanced by those very distances: The project team says the SKA will operate 10,000 times faster than any other telescope. "Signals will be transferred to a central high performance super computer by optical fibres carrying up to 420 Gb/sec per dish and 16 Tb/sec per aperture array," says SKA.

The receivers will be arranged in five spiral arms extending from a central core, explains the SKA organization. In Australia the SKA would stretch all the way to New Zealand, and in Southern Africa it would stretch to the Indian Ocean islands. "In the higher part of the frequency band, the SKA will use 3,000 dish antennas, each about 15 m. wide," says SKA. "In the lower part of the frequency band, two other types of antenna, aperture arrays, will be used to observe very large areas of the sky simultaneously."

A site selection decision is expected in early 2012, with construction projected to begin in 2016. The technical assessment and evaluation phase of the site selection process is being overseen by the SKA Siting Group (SSG), which reports to the SKA Founding Board. The first step in this phase is information gathering where the candidate sites will make submissions covering science and technical factors; other factors, including legal, customs and security; and plans and costs of implementing infrastructure, including power supply and distribution.

"Selection of the host site for the SKA will be made in terms of characteristics for the best science as well as the capability and cost of supporting a very large infrastructure, taking the political and working environment into account," said Professor Richard Schilizzi, director of the SKA, whose program development offices have been based at the University of Manchester (U.K.) but will move to new project offices at the nearby Jodrell Bank Observatory in January 2012. The new project office is expected to employ up to 60 people within the next four years.

Shining a Light on Dark Matter

Selection factors that will be considered in the decision-making process will include levels of radio frequency interference, the long-term sustainability of a radio quiet zone, the physical characteristics of the site, data network connectivity across the vast distances covered by the telescope, and operating and infrastructure costs.

In April 2011 nine national governmental and research organizations from Australia, China, France, Germany, Italy, the Netherlands, New Zealand, South Africa, and the U.K. signed a letter of intent in Rome declaring their common ambition to see the SKA built, and agreed to work together to secure funding for the next phase of the SKA project. More than 70 institutes in 20 countries, together with industry partners, are participating in the scientific and technical design of the SKA telescope.

Among the mysteries to be probed by the SKA once it's finally completed 13 years from now:

Nothing small about that agenda. There's also nothing small about the timeline. After all, it took a number of years to pick the two finalist sites from an initial list created in 2006. Full operation of the entire radio telescope is not projected to begin until 2024. So there may have been some unintended levity when Australian Innovation Minister Senator Kim Carr said at a gathering with schoolchildren in June to construct a model of SKA, "Even more exciting is the possibility that the students working on this model SKA today may be the scientists working on the real SKA tomorrow."

How much economic development could ensue from the SKA? It comes in bits and pieces. In March CSIRO awarded McConnell Dowell Constructors (Aust) Pty Ltd the contract to construct support infrastructure at the Murchison Radio-astronomy Observatory, including access roads and tracks, power and data distribution, a central control building, and foundation pads for the initial 36 antennae. In South Africa, the ROACH (reconfigurable open architecture computing hardware) boards, primary building blocks that enable highly specialized and superfast computing, are made in South Africa.

Bigger industry partners thus far have included Intel, BAE Systems and Cisco Systems. In Australia, a memorandum of understanding was recently signed by CSIRO, the Fraunhofer Institute of Solar Energy and the Max Plank Institute for Radio Astronomy to promote scientific cooperation between Australia and experts from Germany and the rest of the world in renewable energy capture, storage and management for the SKA.

"Industry participation with the SKA offers the potential for involvement across a range of engineering and computing disciplines," says the organization. "The SKA expects to collaborate with a variety of industry partners, including niche R&D companies, followed by increasing engagement through commercial contracts with high-volume manufacturers, technology systems vendors, site services and installation firms, and power and data transmission specialists.

In particular, contracts may be sought for:

In South Africa, legislation has created 12.5 million hectares of protected area, which the project team calls its "radio astronomy reserve." South Africa's Astronomy Geographic Advantage Act (2007) declares the entire Northern Cape Province, with the exception of the Sol Plaatje Municipality (Kimberley) as an astronomy advantage area, offering low levels of radio frequency interference, very little light pollution, and basic infrastructure of roads, electricity and communication. "The human story began in Africa and it can also be the place where we find answers to the story of our universe," says the project team.

The core of the telescope would be constructed in the Karoo region of the Northern Cape Province near Carnarvon and Williston, linked to a computing facility in Cape Town. Other countries where stations would be placed include Namibia, Botswana, Mozambique, Mauritius, Madagascar, Kenya and Zambia.

The team even promoted its bid in the halls of the U.S. Congress in June, via a reception that included the South African Ambassador to the U.S. and several congressmen.

"From an economic development standpoint having the SKA in Africa not only represents a perfect example of African regional integration, but also an unrivalled opportunity to improve the continent through science and technology," said Congressman Bobby Rush (D-Ill.). "It provides a world-class incentive to the continent's youth to study science, and also a vital opportunity for U.S. businesses and academics to cultivate and develop partnerships in Southern Africa. This will, no doubt, lead to new industries and economic development both here in the U.S. and in Africa. I am thrilled to know that partnerships with researchers in my district from the University of Chicago as well as the Adler Planetarium are also contributing to the establishment of Africa as the next astronomical frontier."

In Australia, the Gillard government in May said it would provide AU$40.2 million over four years to support Australia's bid to host the SKA in partnership with New Zealand. Among the advantages the Australia team touts is the nation's National Broadband Network. The Australian Government is spending $21 million over three years on Australia's first ever national science engagement strategy, "Inspiring Australia," and has now committed over $349 million in total funding for the SKA.

Two weeks ago, a working optical fiber link was opened between the Commonwealth Scientific and Industrial Research Organization's (CSIRO). Australian SKA Pathfinder (ASKAP) telescope in Western Australia, and other radio telescopes across Australia and New Zealand. (Similar experiments in long-distance connection have successfully been carried out in Africa.) "For an SKA built in Australia and New Zealand, this technology will help connect the SKA to major radio telescopes in China, Japan, India and Korea," said Curtin University Prof. Steven Tingay.

In Australia in June, names were bestowed by seven Aboriginal families on the first six antennas at the ASKAP telescope. That telescope, which will boast 30 more antennae by early 2012, is the core site for the region's SKA candidate site. Eventually all 36 will have names in the Wajarri language. Among the first names are Bundarra (stars); Wilara (the Moon); Jirdilungu (the Milky Way).

"These names will be a permanent reminder that this is the land of the Wajarri people, said Gavin Egan, chair of Wajarri Yamatji Native Title Group.The naming comes 18 months after the signing of an Indigenous Land Use Agreement (ILUA) by the Commonwealth, Western Australia, CSIRO, the Yamatji Marlpa Aboriginal Corp. and the Wajarri Yamatji people. The agreement allows CSIRO to lease the land, conduct works for the project without extinguishing native title, and protect heritage values. It provides financial and non-financial benefits for the Wajarri People, including up to 70 cadetships with CSIRO over the next 30 years.

Just as Africa's SKA claim notes the continent's roots for all mankind, Australia's tribes could be looked to as pioneers in astronomy, with observations and attached myths going back 40,000 years, well before the Incas, Greeks and Babylonians. According to Questacon, Australia's national science and technology center, among the sky legends handed down from the aboriginal peoples is the "dark matter" shape of the emu.

"The faint enormous figure can be seen only in areas well removed from the polluting lights of our cities and large towns," explains a Questacon Web page. "This dark shadow has been of great importance to Aboriginals for thousands of years. It influenced the stylized forms of the emu on rock art, the design of some ceremonial sites and its orientation at certain times of the year acted as an indicator to when these ceremonies should be held... This important object in the night sky is the blackness between stars and the bands of the Milky Way - it is a 'shadow' caused by the dust and gas clouds of space." 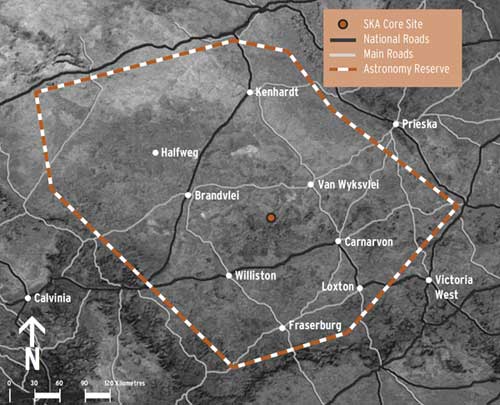 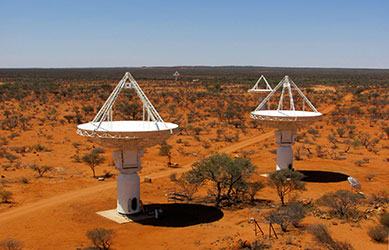 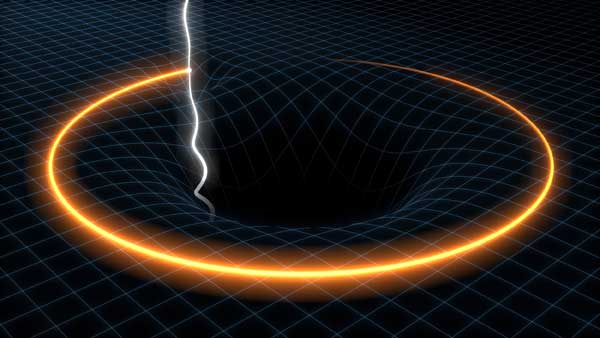 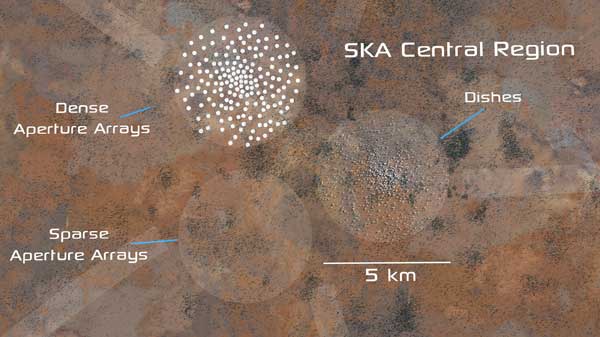