Tumult in the Arab world does a favor for stable regimes. 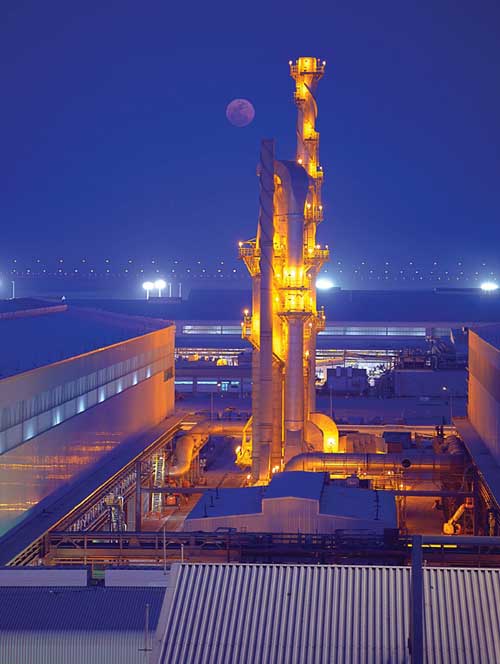 Materials are the key to both infrastructure and industry growth. The growing Emirates Aluminum Ltd. (EMAL) smelter complex is located on a huge site in the Khalifa Port and Industrial Zone in Al-Taweelah, approximately halfway between the UAE cities of Abu Dhabi and Dubai.
By Rob Denman, CEO, Pathfinder Business

This table from the report “12 Trends for 2012” from CB Richard Ellis, issued in January, buttresses the argument that the UAE is benefiting from a flight to stability.

The Arab spring and global economic turbulence have dealt the Middle East a mixed hand of fortune. Winners, however, were easy to predict: Look no further than stable regimes, untroubled by uprisings, where good infrastructure and a skilled labor pool are already in place.

Yet even old hands with a finger on the local pulse failed to anticipate the bounce in Dubai, badly shaken after the property speculation bubble burst in 2009. “It took me by surprise,” admitted John Martin St. Valery, CEO of Links Group, specialists in on-shore company formation and operating in Dubai since 2002, in an interview last fall.

In the first three quarters of 2011, Links Group recorded a 75-percent increase in issuing onshore business licenses in Dubai and Abu Dhabi compared to the same period last year. Inevitably the Arab Spring was a factor — “people seeing troubles in Bahrain and having concern about the safety of the business environment,” said Martin St. Valery.

The World Bank’s “Doing Business 2012” report, released in October, ranks the UAE 33rd out of 183 economies for ease of doing business, up two notches from its 2011 ranking. Its biggest sub-topic rankings improvement was three spots, to No. 33, in “starting a business,” while its highest ranking overall was No. 5 in “trading across borders.”

“Saudi Arabia remained the regional leader with a global ease of doing business ranking of 12,” said a World Bank press release. “Qatar implemented its first reforms since 2005 and climbed to 36 on the global scorecard by improving its credit information system.” Over the past six years, said the Bank, 17 economies in the Middle East and North Africa have made their regulatory environment more business-friendly.

The Arab World Competitiveness Report 2011-2012 issued last year by the World Economic Forum (WEF) notes that youth unemployment (15-24 years) averages 25 percent across the MENA region (compared with 17 percent in the OECD), and reaches 30 percent in countries such as Saudi Arabia and Tunisia. “Moreover, the most educated segments of the population are not finding enough jobs,” said the report. “Over 40 percent in Saudi Arabia and above 20 percent in Morocco and the United Arab Emirates are unemployed.”

At the same time, IBM-PLI’s “Global Location Trends 2011” report found that the UAE ranked ninth in 2010 in project-related job creation per 100,000 inhabitants, after ranking fifth the year before.

Links Group is “a bit of barometer of what’s going on.” But it isn’t only concerns over civil disorder causing businesses to flock to Dubai; it is, said Martin St. Valery, safety with regard to corporate governance. “There’s a way to go but measures are being put in place to protect stakeholders and shareholders, and we see that trend continuing. If it doesn’t, there’s the risk to the objective of continuing to secure FDI, on which Dubai is extremely dependent.”

On-shore licensing is only part of the story. Dubai, undeterred by its property crash of 2009, continues to think as big as before, as shown by the creation of Dubai World Central, a vast logistics hub built around what is expected to become one of the world’s busiest airports.

The man charged with selling this “aerotropolis” is Nick Maclean, Middle East managing director of the giant real estate consultancy CB Richard Ellis (CBRE). He has 2.3 million sq. ft. (213,670 sq. m.) of leasable area to let in lots starting at 1,000 sq. ft. (93 sq. m.). “To kick-start demand, high quality offices have been built speculatively to attract people who require offices besides warehousing or manufacturing accommodation,” Maclean said in the fall.

“Flight operations have started.The other international airport in Dubai has been very successful and will reach maximum capacity; and so flying operations will naturally migrate to Dubai World Central.Its geographical location between Europe and Asia Pac gives it a natural hosting advantage.”

Moreover DWC is near to Jebel Ali Sea Port, the sixth-largest container terminal in the world; and has links to all the UAE’s main motorways. “The office business park development can be offered on a free-zone basis or not, depending on the client’s specific needs,” said Maclean. “It will offer a one-stop shop for companies looking for licensing and registration of their business. We’ve seen strong interest from a variety of companies attracted by the facilities — and not all are in the logistics sector.”

Martin St. Valery agreed about DWC’s potential and thinks it will reinforce Dubai’s recovery. “Transport links here are second to none — you can fly direct to the west coast of America and to Brazil,” he said.

As for the complex at Jebel Ali, global marine terminal operator DP World announced on Jan. 31 another record year for container handling, with over 54.7 million TEU (20-ft. equivalent container units) handled across its global portfolio in 2011. The increase of 10 percent against the prior year was driven by 12-percent growth in the UAE, handling 13 million TEU for the year.The UAE region saw 16-percent volume growth in the final quarter of 2011. In December, DP World announced plans to expand capacity at Jebel Ali by a further 4 million TEU to reach capacity of 19 million TEU by 2014.

“Our flagship terminal in the UAE has yet again exceeded all expectations delivering another record year as it continues to position itself as the gateway port of choice to handle cargo destined for the Middle East, India and Africa regions,” said DP World Chairman Sultan Ahmed Bin Sulayem.

The rich potential of regional neighbor Qatar — it is home to one of the world’s largest gas fields and victorious bidder for the 2020 football World Cup — is, added Martin St. Valery, one of the things luring companies to not just the Qatari capital Doha but also Dubai. Links Group saw its strongest growth through 2011 in construction, consultancy services and petrochemicals.

“Many companies are positioning themselves in the UAE to respond to the anticipated release of large project tenders in Qatar,” said Martin St. Valery. “Enormous infrastructure planning is starting to take place … railways … roads … an incredible amount over the next seven to 10 years. A lot of people are coming into UAE to take advantage — tender packs are only just coming on to the market. You can fly there from Dubai within the hour.”

Because Dubai is “a good place to live and work,” businesses that outsourced some functions to India are coming back — staff who left to work at a senior level are returning. “We’ve also seen some companies coming back in from Europe and Asia,” Martin St. Valery added.

Maclean meanwhile reported an “an increased tempo” in the arrival and expansion of international businesses, particularly Dubai, and especially among corporates creating regional headquarters for businesses with a MENA (Middle East and North Africa) focus. The IMF in the latest update to its World Economic Outlook, issued on January 24, predicts a GDP growth rate of 3.3 percent in 2012 followed by 3.9 percent in 2013 for the MENA region.

“These companies are predominantly European or American but we’re seeing the first signs of Chinese companies creating businesses centered on the UAE,” he said.

“Dubai’s principal advantage at presentis its labor pool … the availability and breadth of skill sets. Abu Dhabi also provides regional advantages but its development pipeline is behind that of Dubai.”

Abu Dhabi is just an hour down the road from Dubai and is the UAE federal Capital and the largest of the seven Emirates.

Abu Dhabi was required to support Dubai and other of the emirates during the worst of the downturn. The most visible response and recognition of this support was the last minute name change of the world’s tallest tower from Burj Dubai to Burj Khalifa to honor the emir of Abu Dhabi and UAE president Khalifa bin Zayed al Nahyan.

Sentiment and optimism seemed to be returning to Dubai more quickly. Several large schemes in Abu Dhabi, including the Zayed National and the Guggenheim museums on Saadiyat Island, were delayed, and some Abu Dhabi-based organizations and developers have laid off staff.

Previously delays in issuing contracts for major construction projects have knocked the earnings of regional construction companies, such as the Middle Eastern division of Atkins, the U.K. engineering and design company which is working on the Dubai Metro and the Etihad Rail line.

But the February bulletin from the Abu Dhabi Investment Co., the emirate-owned financial services company, remarks, “Markets in the United Arab Emirates perked up in late January thanks to an Abu Dhabi government announcement that some previously suspended projects would be continued, and more investment devoted to housing and education.”

Martin St. Valery said that while the Arab spring presented an opportunity, it could also pose a risk with instability in Syria and Iran creating regional tension. Events since the dawn of the New Year have only reinforced the need to weigh risks and opportunities in the light of the latest intelligence.

“The Arab spring has increased our business, but if something untoward happens in this area, it may make Europe and the U.S. think twice (about locating in the Middle East),” he said. “People need to have a clear understanding of what’s happening.”

While the good times were returning as 2011 drew to a close, both Maclean and Martin St. Valery struck a cautious note.

“The biggest risk to regional growth is the lack of momentum in the global economy,” said Maclean.“The (local) economies have been very successful at stimulating demands for goods and services but ultimately are still funded through global demand for oil. So, with the possible exception of Saudi Arabia, which has a significant opportunity to develop domestic demand, regional growth remains dependent on global growth.”

“It is certain that the Arab Spring provides a unique window of opportunity for the MENA region to leverage its ‘youth bulge’ and introduce the transparent and accountable policies and institutions that will support increased competitiveness and higher living standards,” said the WEF report in October.

In other words, the short-term flight from tumult to stability may just be the prelude to a more fundamental regional economic transformation. 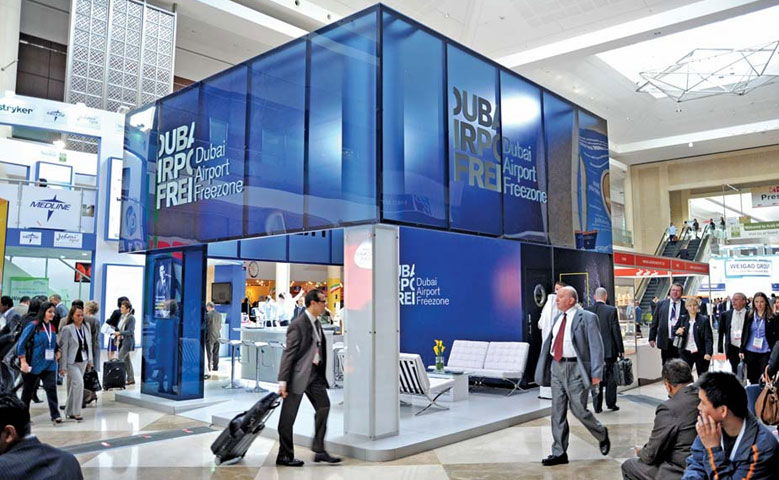 The Dubai Airport Free Zone has helped attract operations from such companies as Mercedes, Ford and, most recently, a regional headquarters from Onsite OHS, an emergency medical services company that looks at the location as an optimal jumping-off point to reach areas of unrest quickly. (Read more about the company’s reasoning in the March issue of Site Selection.)