A Tale of Two Governors

One fights to rescue his economic development agency. The other is making needed reforms. 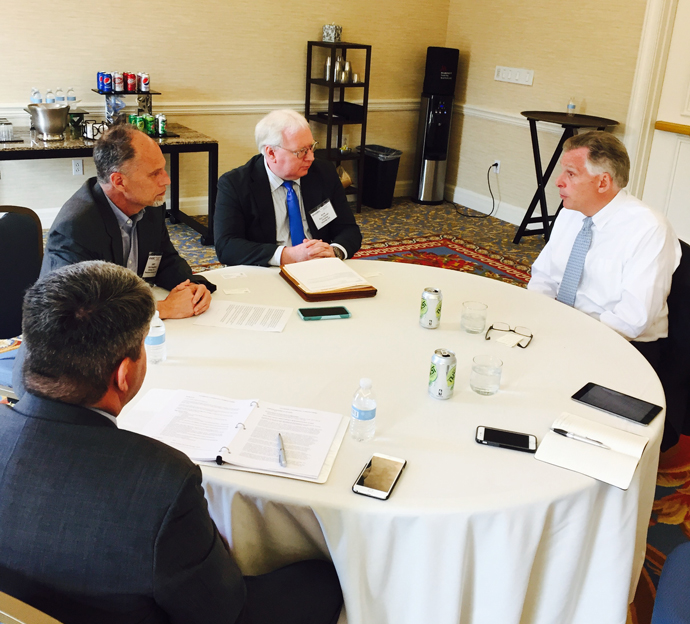 Governors Rick Scott of Florida and Terry McAuliffe of Virginia addressed challenges facing their states’ economic development agencies on the sidelines of the annual Spring Professional Forum of the Industrial Asset Management Council, held April 8-12 at the Marriott Waterside Hotel and Marina in Tampa. Some 500 corporate real estate leaders, site consultants, economic developers and service providers attended the event organized by Conway, Inc., publisher of Site Selection and provider of association management for IAMC. The two governors spoke at the gathering and met with Site Selection editors for private interviews.

Enterprise Florida and Visit Florida, the Sunshine State’s economic and tourism attraction engines, are facing existential threats posed by Florida lawmakers who question their utility and are advancing legislation to defund them. Virginia’s Economic Development Partnership, subject of a scathing legislative audit last fall, has undergone a change in leadership and now is being reformed top-to-bottom, says Gov. McAuliffe, who also weighed in on a range of other topics, including his rocky relationship with the Trump Administration and a possible bid for the presidency in 2020.

Spoiler alert: McAuliffe isn’t ruling out a run for the White House, and he pointedly suggests that the Democrats’ next nominee should come from the ranks of the party’s state governors.

On economic development, Gov. Scott’s conundrum is the deeper and more immediate, and saving “Enterprise” and “Visit” has moved to the top of his priorities list.

“We’re very focused on making sure Enterprise Florida and Visit Florida are fully funded,” Scott tells Site Selection. “I go talk to House members all the time, and senators, about the importance of it, and explain that we’re getting a great return for taxpayers.”

Somewhat ominously for Scott, the legislators who reject that argument include Florida House Speaker Richard Corcoran, a fellow Republican, who has derided both programs as “corporate welfare,” and says Enterprise Florida, in particular, puts the state in a position of “picking winners.” The argument goes that incentives unfairly favor large businesses over smaller ones, that companies that don’t receive them are put at a competitive disadvantage vis-a-vis those that do, and that state money could be put to better uses, such as infrastructure improvements and education.

'We’ve got to keep marketing our state'

Scott counters that “Enterprise” and “Visit” not only work, but that they’re cost-effective and central to his strategy of creating 700,000 jobs above projections during his tenure as governor, which began in 2011.

“In six years and two months, we’ve added 1.3 million new jobs,” Scott tells Site Selection. “It’s very important we keep the effort up. Visit Florida — last year we had almost 113 million tourists. We’ve got to keep marketing our state. If we don’t we’re not going to get as many tourists, which will mean less jobs, and 1.4 million jobs are tied to tourism. 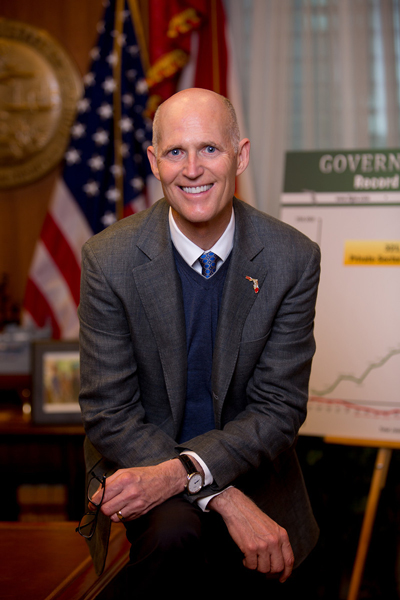 “Through Enterprise Florida,” Scott continues, “we’ve won over 900 projects. We get five times our money back on those transactions. Enterprise Florida doesn’t just do the transactions, they help thousands of companies a year through consultations. They do 20 trade missions around the world each year. This is important to every family in the state, and I’m traveling the state and doing roundtables and letting people know the importance of this.”

With four weeks remaining in Florida’s legislative session, a bill to effectively kill both agencies along with a lengthy list of tax-credit and grant programs designed to attract companies to relocate and build in Florida has cleared a House subcommittee. Revisions are expected before any such legislation might arrive at Scott’s desk, and the governor vows to keep up the pressure on lawmakers for the rest of the session.

“I’m optimistic,” says Scott, “that both will get fully funded.”

No one speaks of defunding the Virginia Economic Development Partnership, but the agency sustained a deep black eye in November, when a watchdog for the Virginia General Assembly uncovered systematic mismanagement at the agency and, most damningly, an alleged failure to recoup $8 million worth of incentives awarded to companies that failed to meet performance targets.

The partnership’s president and CEO resigned in March 2016, three days after a Chinese-led company missed a deadline to repay a $1.4 million state grant it received for a project that never got off the ground. The agency’s leadership post was filled late last year by Stephen Moret, who served as secretary of the Louisiana Department of Economic Development from 2008 to 2015, and then as president and CEO of the Louisiana State University Foundation in Baton Rouge.

Gov. McAuliffe, who says he is days away from signing legislation aimed at fixing the agency, maintains the problems at VEDP aren’t the individuals there, but the structure under which the partnership has operated since its inception under Gov. George Allen in 1996, a point the legislative audit also made. The independent board that has overseen VEDP, says McAuliffe, met infrequently, exercised minimal oversight and, most critically, didn’t answer to the elected state administration.

“The board was worthless,” says McAuliffe. “Why would you not ask about return on investment, about how we did on every deal? ‘Did we get our money back?’ These are basic questions you would ask. The board never asked them.

“The governor had zero authority,” McAuliffe says with incredulity. “They didn’t report to me. I couldn’t get reports, nor could the legislature. The whole thing was goofy.”

Under the soon-to-be-enacted legislation, the old board is to be fired and replaced by one appointed by and answerable to both the governor and the state legislature.

“We’ll get to reappoint it with my appointees,” says McAuliffe, “and they’ll answer to the Secretary of Commerce.” The state will also examine ways to claw back money paid to companies that fell short of goals established in their incentives agreements. State officials maintain the actual sum lost is substantially less than the $8 million claimed in the audit.

On Trump and the 2020 Election

The animated and voluble McAuliffe, who can pound the table to emphasize his words, is unsparing in his criticism of President Donald J. Trump.

“I’ve known the president for 20 years. He was a contributor to my campaign when I ran for governor, but his actions so far have been a disaster,” says McAuliffe, ticking off a litany of complaints that include the government hiring freeze that hits Virginia, as a neighbor of Washington, DC, disproportionately hard; the failed healthcare replacement plan, which McAuliffe says would have cost his state about a billion dollars a year; continuing sequestration-level military spending, which he says is a particularly deep blow to Virginia’s mammoth defense industry; and, among other things, Trump’s proposed scrapping of federal funding to complete the cleanup of Chesapeake Bay. 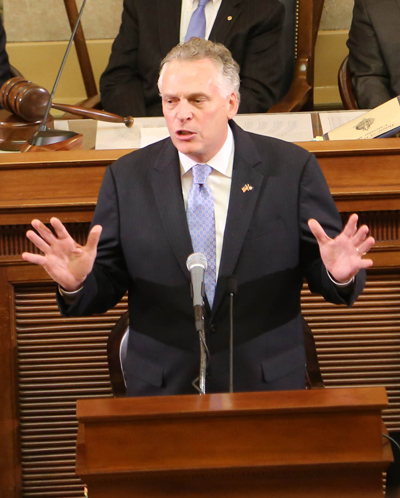 “I’m not getting any help out of Washington," says McAuliffe, "and I told the president, personally, ‘You have done nothing but hurt my economy. You ran on jobs, and everything you’ve done is hurting me.’ ”

Long a close friend of and prolific fundraiser for Bill and Hillary Clinton, McAuliffe rejects the notion, heard in some Democratic circles, that the party allowed its fortunes to become too entwined with those of its two most visible leaders, the Clintons. McAuliffe’s term as governor ends in 2018, and Virginia law precludes him from running again. Might he toss his hat into the ring in the 2020 race for the White House?

“I want to finish very strong here,” McAuliffe says. “I don’t know what I’m going to do next, but I can promise you this: I will always be active and in the game.”

Prodded to say more on the subject, McAuliffe describes the ideal Democratic nominee as someone a lot like himself.

“I always think it’s important we have governors running, because let’s be honest, at the end of the day, governors are responsible for economic development. I have to create jobs every day. I have to make sure our transportation system works. I’m the one building roads, investing in education. We run our Medicaid programs, we run our healthcare programs. So I just think the experience of a governor is closely aligned with the president.”