Robotics and automation firms look to Asia and to smaller companies for growth, and create jobs along the way. 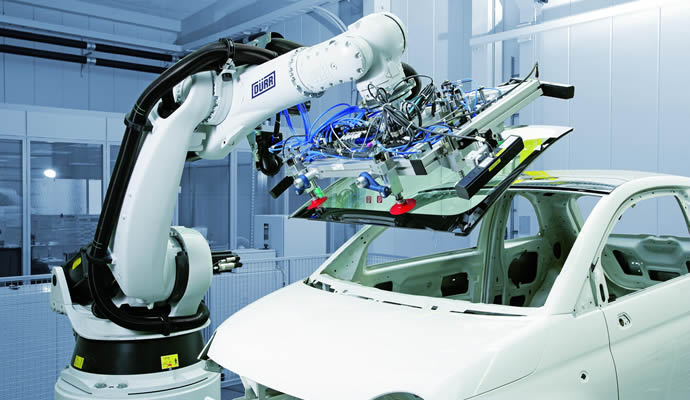 A Dürr robot glues a window into place on a Fiat.
Image courtesy of IFR
by Adam Bruns 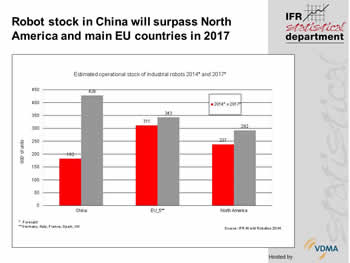 There will be no shortage of robotics and automation solutions on display next week as tens of thousands of people from around the world descend on the Automate show in Chicago.

So there's no better time to take a global glance at how robotics are infiltrating every industrial sector and every geography, courtesy of the 2014 World Robot Statistics report issued in late January by the Germany-based International Federation of Robotics (IFR), which will host its International Symposium on Robotics in Chicago next week as well.

The upshot from the update? China, far from being an also-ran when it comes to manufacturing, is just getting started with applying robotics to that production.

"By 2017, more industrial robots will be operating in China's production plants than in the European Union or North America," says the IFR. "Operating unit numbers there will double from today's 200,000 to more than 400,000. To compare: In North America, numbers will rise to about 300,000 — with 340,000 predicted for Europe's five largest economies." 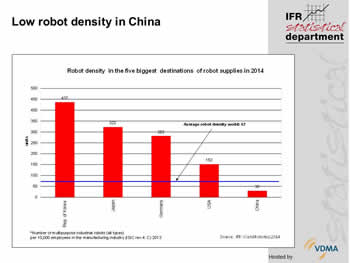 "The automation of China's production plants has just started," said Per Vegard Nerseth, managing Director, ABB Robotics, in the IFR report. "As the first foreign robot manufacturer to arrive here, we have observed the market and developments for years now. We have witnessed swift, almost explosive growth over the last two or three years, surpassing even our expectations." Kuka and two Japanese robot manufacturers now also have their own locally based production sites. The Chinese government is simultaneously pushing forward with robotic research. 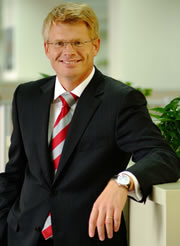 One of the largest robotics facility investments Site Selection's New Plant Database has tracked since the beginning of 2013 was Yaskawa Electric Corp.'s $40-million manufacturing plant in Changzhou in summer 2013. Among other areas, Yaskawa in 2013 forged a strategic partnership with Argo Medical Technologies, the Massachusetts-based maker of the award-winning ReWalk exoskeleton system for paraplegics first profiled in Site Selection in November 2012.

Germany's Dürr announced this month that over the past three years it has invested more than €70 million in its sites around the world, including a new training center that will open in the next few weeks in Chennai, India, and at facilities in Germany and near Turin, Italy. More than 70 percent of that total investment is going toward two major plant projects in China and the United States.

"In Shanghai-Qingpu the company is creating an office building, an assembly hall for application technology as well as training and testing facilities," says the company. "This campus will be up and running in 2017. It will be situated near the production plant for paint and final assembly systems, which opened in 2012. This means shorter distances for the 850 employees currently based there. In addition, the local service provided to customers will be even better, as their staff will be able to attend training events at Dürr in Qingpu rather than having to fly to Germany. They will also be able to follow the pre-commissioning phase and test new processes on site."

In September 2013 Dürr opened its new mechanical engineering site in Shanghai. The production and office complex in the district of Baoshan combines all Chinese activities of the Measuring and Process Systems division with around 600 employees under the umbrella of Schenck Shanghai Machinery Ltd. From its Baoshan base the Group takes care of the balancing, cleaning and filling technology business as well as test and assembly products in China and Southeast Asia. 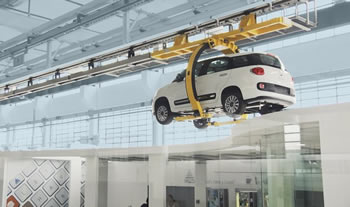 Dürr is investing in facilities around the world, including at its Italian subsidiary, CPM, which has converted its Beinasco site near Turin. Above the new offices in the tech center is a twin trolley system.
Courtesy of Dürr

From 2016, all of Dürr USA's activities currently located in the Detroit area will be brought under one roof in Southfield, Mich. Nearly 500 employees will relocate to the new premises from Auburn Hills, Plymouth and Wixom.

"The consolidation will simplify Dürr’s activities in North America for customers," says the company. "Another benefit is the well equipped area for product testing and training. Around 25 percent of the 21,000 square meters [226,050 sq. ft.] of usable space is earmarked for a flexible assembly hall. This will mainly be used for products in application, balancing, filling, cleaning and testing technology.

Robot orders and shipments in North America set new records in 2014, according to a report released in February by the Robotic Industries Association (RIA).

RIA estimates that some 230,000 robots are now at use in United States factories, placing the US second only to Japan in robot use.

The automotive industry was the primary driver of growth in 2014, with robot orders increasing by 45 percent year over year. Non-automotive industries also performed well throughout the year, growing by 7 percent over 2013. "The standout non-automotive industries in 2014 in terms of order growth were plastics and rubber (25 percent), semiconductor and electronics (21 percent), and metals (16 percent)," said the RIA. Arc welding and spot welding robots were the fastest growing applications, followed by assembly and material handling. RIA estimates that some 230,000 robots are now at use in United States factories, placing the US second only to Japan in robot use. 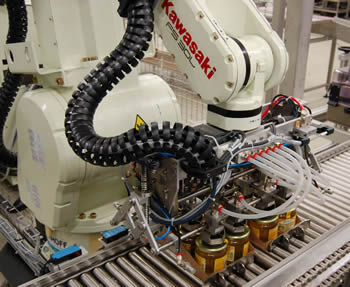 Robot orders in non-automotive industries grew by 7 percent in 2014 over 2013. Here a Kawasaki robot assists in packaging honey.
Courtesy of IFR

Jeff Burnstein, RIA president, noted that the RIA and its parent group the Association for Advancing Automation are seeing the impacts of the growth in demand for automation in events like the upcoming Automate 2015 show. "With six weeks to go, the exhibit floor at Automate 2015 is already over 70 percent larger than our 2013 event," he said in February. "This growth is attributed to the fact that leading automation companies are reaching out to small and medium sized customers, many of whom are just now beginning to explore automation."

As The Wall Street Journal's Tim Aeppel recently reported, the venture capital community is taking notice as well. Robotics blogger Travis Deyle in January reported that VC funding for robotics in 2014 increased by more than 36 percent over 2013 to $341.3 million, with drone and medical robot applications leading the way.

Among the corporate investors tracked by Site Selection over the past two years is Genesis Systems Group, one of North America’s largest robotic integrators, which in December 2013 marked its 30th year in business by announcing a $4.6-million capital investment that added jobs and allowed the company to manufacture more of its products in its home base in Davenport, Iowa, part of the Quad Cities metro area. The renovation of a 61,000-sq.-ft. (5,667-sq.-m.) building called for nine more jobs immediately to be added to the payroll of 163, with further capacity available for future growth.

“The Quad Cities is the perfect hub for Genesis’ expanding, multinational enterprise," said Joel Lorentzen, president and CEO of Genesis Systems Group, at the announcement. "Our workforce is the best in the world for what we do."

“The Quad Cities has a deep heritage of advanced manufacturing and innovation, and the work that Genesis Systems Group is doing continues to further the region’s reputation as an advanced manufacturing innovation hub,” says Tara Barney, CEO, Quad Cities Chamber, which started working with the company in 2012 through its Business Connection outreach program. “The Chamber staff, along with staff from the City of Davenport and Iowa Economic Development Authority, worked closely with Genesis Systems Group to move this project forward.”

Amada America early last year made a $14-million investment at its Amada Solution Center in Schaumburg, Ill., a high-tech 133,000-sq.-ft. (12,356-sq.-m.) facility designed to demonstrate to customers the company's range of laser cutting, robotic bending and other solutions for manufacturers. The investment came a year after opening a new 180,000-sq.-ft. (16,722-sq.-m.) laser manufacturing facility in Brea, Calif., in February 2013. Patterned after the world's largest laser manufacturing facility in Fujinomiya, Japan, the facility will be one of Amada's mainstay production plants.

As of this week, Amada has more than 30 job openings across the United States, including multiple welding, machining and manufacturing positions at its sites in Schaumburg and Brea. 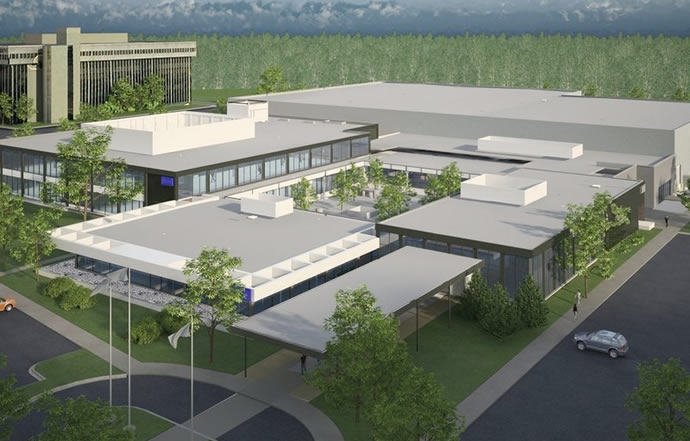 Dürr USA is planning to move into a new campus in Southfield, Mich., in early 2016.
Image courtesy of Dürr