A new report documents the reach of the nation’s coastal zones. 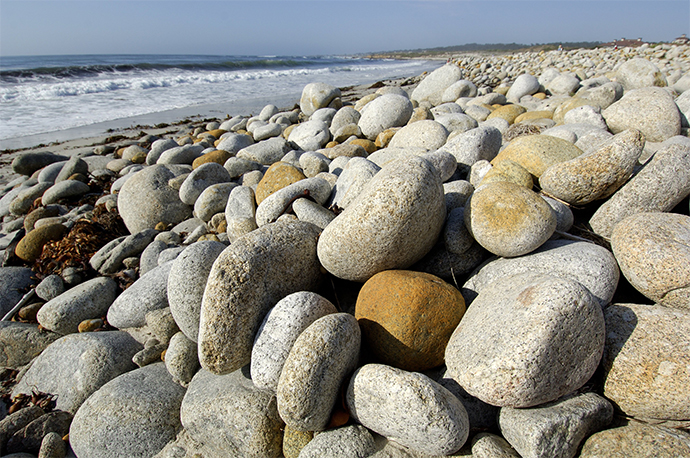 California is the only state ranked in the top five states by employment for five of the six ocean economy sectors studied by the NOEP report. While coastline images of Pebble Beach (above) and Big Sur (below) loom large in our consciousness, the report notes that it’s the metros along the country’s shoreline that drive the ocean economy.
by ADAM BRUNS 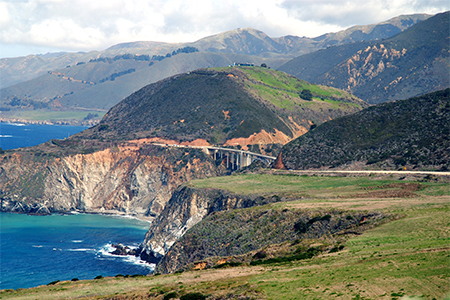 Long before the nation’s reshoring phenomenon took hold, there was an actual shoreline doing its part for the US economy. A new report says it’s still holding its own.

The National Ocean Economics Program (NOEP) of the Center for the Blue Economy, based at the Monterey Institute of International Studies in California, this week released its State of the US Ocean and Coastal Economies 2014 report, a follow-up to its initial report five years ago.

The importance of the coastal economy is reinforced by Site Selection’s tracking of new private-sector facility investments last year, including the Eastern Seaboard and the energy-rich Gulf Coast states. As published in our traditional Governor’s Cup rankings this month, nine of the top 10 states were shoreline states. In the new per-capita category, six of the top 10 had shoreline. However, among the top 10 metro areas for projects across three separate population categories, only six of the 30 areas were shoreline communities.

In addition to measuring economic activity in the more general coastal economy, the NOEP report examined employment, wages, and output from six sectors and 21 industries whose goods and services derive in one way or another from the oceans and Great Lakes. The six sectors are marine-related construction, living resources (fisheries, seafood processing), minerals (oil and gas activity), ship and boat building, tourism and recreation, and transportation (including warehousing, deep-sea freight, passenger transport and the recently booming sub-category of search and navigation equipment).

According to the NOEP report, “four of the five largest states in terms of ocean economy employment are also the four largest states in terms of total employment. These are Texas, California, Florida, and New York. California is the only state ranked in the top five states by employment for five of the six ocean economy sectors and also in the top five in ocean economy overall. The state of Washington ranks highly among states in living resources and ship & boat building because it is the center for the Northwest Pacific fisheries.”

“Between 2007 and 2012, coastal states lost 3.8 million jobs, accounting for 80.5 percent of national job losses, but contributed an additional $260 billion to GDP, reflecting the faster recovery in GDP and slower recovery in employment.”

Tourism and recreation is the largest employment sector in the ocean economy, comprising over 1.9 million jobs or 70 percent of all marine-related employment.

“From 2005 to 2010, 41,000 jobs were added to the ocean economy, but these new jobs were offset by 43,647 jobs lost in the marine construction, ship & boat building, transportation and living resources sectors,” says the report. “Overall employment over this period grew only 1.5 percent, and the tourism & recreation sector accounted for 85 percent of the new jobs.”

During that same period, the ocean economy as a whole grew by $42.4 billion, with transportation accounting for 68 percent of that growth. 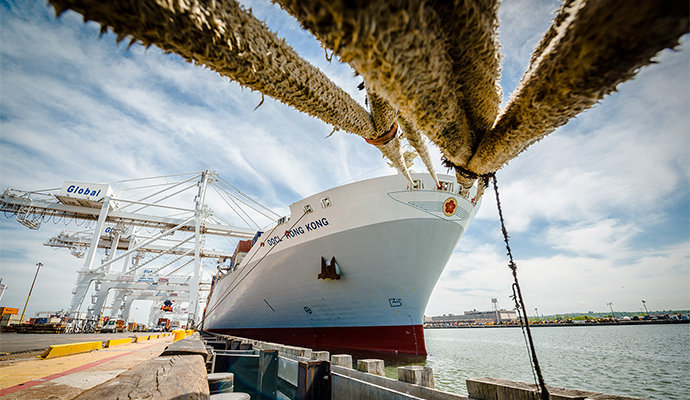 Moving freight by ship still accounts for a huge share of the US coastal economy, including at Global Terminal in Bayonne, N.J. Currently at 100 acres (40 hectares), the terminal is the closest container terminal to the harbor entrance and claims to reduce transit times by two hours. Once the site's expansion project is complete later this year, the terminal will span over 167 acres (68 hectares) and feature a 2,700-ft. (823-m.) berth.
Photo courtesy of Global Container Terminals

The report notes that while the counties along America’s ocean and Great Lakes comprise only 18 percent of the land area of the United States, they harbor 37 percent of US employment and 42 percent of total GDP.

This table from the NOEP report shows state growth in employment and in regional GDP from 2007-2012.

While that area encompasses pristine stretches of scenery and quaint small towns, the report is quick to note that it’s the shoreline’s cities that carry the bulk of the economic load. More than eight in 10 residents of coastal states live in a Metropolitan Statistical Area.

Here are some report highlights from 2010 statistics related to the ocean economy, and to the broader coastal economy:

In the 30 coastal states: 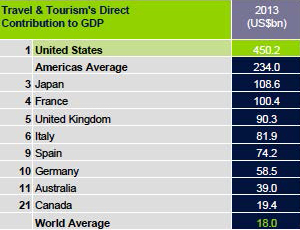 Graph courtesy of the World Travel and Tourism Council

In the watershed counties of the coastal states:

In the shore-adjacent counties of the coastal states: 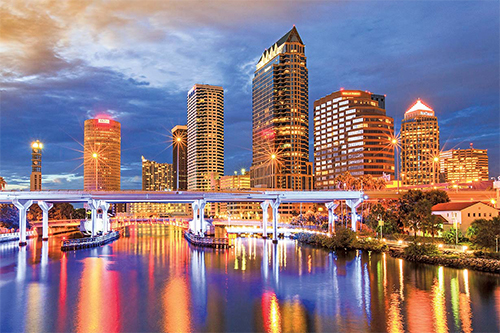 As the NOEP report indicates, metro areas drive the ocean economy. And while the Gulf Coast’s energy activity is garnering the headlines, a metro area along that coast is doing its share in other areas as well.

In the same week that the Tampa Bay Buccaneers unveiled their new logo to much fanfare, community leaders in Tampa were celebrating an announcement of even greater significance. The Atlanta-based Industrial Asset Management Council’s board of directors voted unanimously to award the Spring 2017 IAMC Professional Forum to Tampa. The decision means that about 500 high-ranking executives will descend upon Hillsborough County for five days of meaningful discussions focused on corporate real estate and economic development.

“All of the great things that are happening in and around Tampa are giving us great momentum right now,” says Jennifer Mikosky, communications director for the Tampa-Hillsborough Economic Development Corp. “There has been a resurgence of activity in development in downtown Tampa. We have seen the development of the Riverwalk and Curtis Hixon Park. We have launched a new mixed-use district in Channelside. A lot of commercial growth is taking place there now.”

With recent major job announcements from Amazon, Covidien, Bristol-Myers Squibb, USAA, and the Depository Trust & Clearing Corp., Tampa is on a roll. Amazon led all corporate investors in 2013 with a $204-million project, while USAA pumped $164 million into a facility investment.

Projects like these propelled Tampa to become the fastest-growing economy in Florida and 16th fastest-growing in the US last year. Tampa has also led Florida in job gains in nine of the last 10 months.

“There is no one community in America where all of the different technologies and big data are coming together into one economic eco-system,” Mikosky says. “That is what we are trying to do here in Tampa.” — Ron Starner

Population growth rate in non-shore-adjacent counties was almost twice that in shore-adjacent counties, the report notes, leading to an observation with import for site-searching executives: “The heavily developed nature of the areas near the shore means that expansion, particularly for residential development, is pushed further and further inland. At the same time, the size of the populations near the shore and the attractiveness of shoreline locations provide incentives for businesses to expand in those areas, even as the workforce commute from inland areas lengthens.”

The NOEP report says the most significant long-term trend in the ocean economy is the rise of tourism & recreation as its defining sector. And that’s without even counting marine passenger transportation (which is categorized under transportation rather than tourism). It lists several reasons, including the fact that, despite declines in real income, “domestic travel and recreation has still been affordable to most people, and the oceans and Great Lakes have been a center for US vacations and leisure since the nineteenth century. The concentration of major metropolitan areas in coastal areas also contributes to the growth in components of tourism & recreation related to business travel.”

NOEP says the growing importance of tourism & recreation in the ocean economy is also supported by studies in other countries. “In France, tourism is ‘by far the largest sector of the marine and coastal economy in terms of turnover and employment’ (Kalaydjian et al. 2005). The cruise ship industry in France is not only a major part of French ocean recreation, it is also a significant part of its ship building industry; a quarter of the large cruise ships built in 2005 were built in France.”

The importance of travel and tourism was reinforced by a separately released economic impact report this week from the World Travel and Tourism Council that recognized the United States as a leader globally. The direct contribution of travel and tourism to US GDP in 2013 was $450.2 billion (2.7 percent of GDP).

“This is forecast to rise by 3.5 percent to US$465.8 billion in 2014,” said the WTTC report. A separate report on business travel released in 2011 noted that the ROI for business travel in particular is 10:1 on a global basis— that is, one unit of incremental business travel spending produces incremental industry sales of 10 units. In the Americas, the average ROI was the highest in the world, at 12:1.

“The direct contribution of travel and tourism to GDP is expected to grow by 3.7 percent [per annum] to US$671.5 billion (3 percent of GDP) by 2024,” said the newest WTTC report. 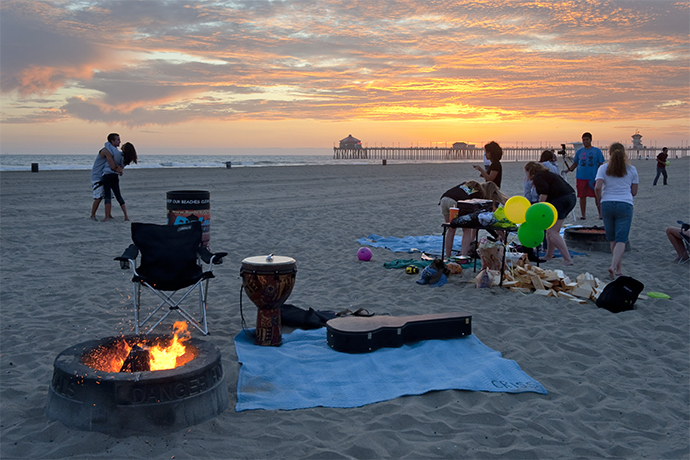 Economic multiplier effects don’t account for the spinoff impact of a beach party like this one at Huntington Beach, Calif. But chances are, its participants don’t really care.
Photo courtesy of Visit California