Swinging for the Fences

In a candid talk, Atlanta Braves President John Schuerholz shares a vision 48 years in the making. 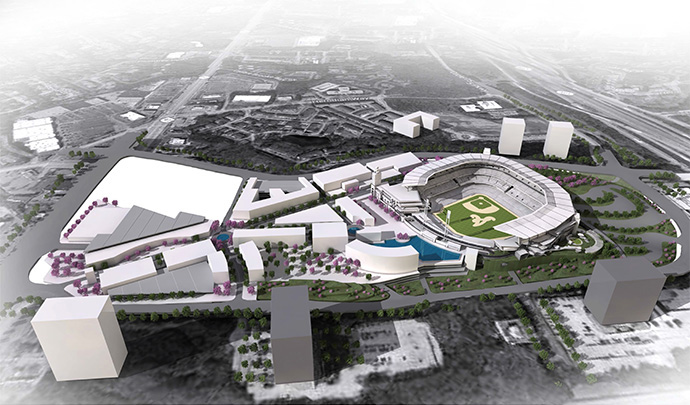 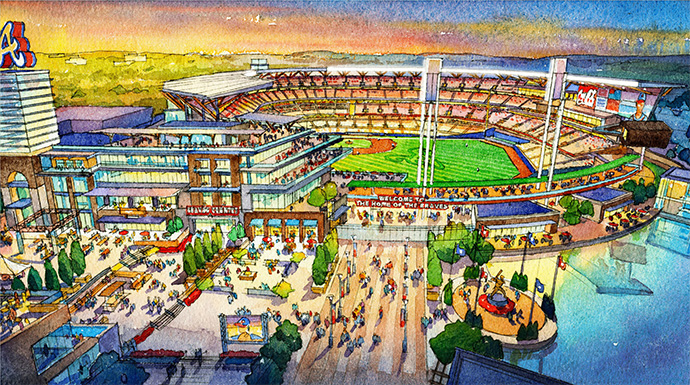 May 2014 artist's renderings shows the conceptual design of the planned new home of the Braves in Cobb County, as well as its mixed-use aspects.
Illustration courtesy of the Atlanta Braves

What happens when you take an economic juggernaut and build Major League Baseball's most modern and amenity-rich stadium right in the middle of it? Atlanta is about to find out.

In an interview with Site Selection earlier this month, Atlanta Braves President John Schuerholz revealed key details about the $672-million ballpark that is scheduled to open for the 2017 season in the Cumberland Community Improvement District (CID) in Cobb County, Ga., about 12 miles north of the Braves' current home in Atlanta.

"The feel of the environment at our new ballpark will be much more intimate than Turner Field," says Schuerholz. "The playing field and the stands will be much closer to each other so that our fans don't feel like they are so far away from the field and the players. If you look at the environment at PNC Park in Pittsburgh, where the Pirates play, our new stadium will provide that level of intimacy."

Amenities galore will fill the new stadium, which is being built thanks to an innovative public-private partnership involving the Braves, Cobb County and the Cumberland CID - a special district that accounts for 5 percent of the state's GDP. Under the terms of the agreement, the Braves will pay for 55 percent of the stadium costs.

The 30-year lease agreement, approved by the Cobb County Commission last Nov. 26, calls for the Braves to pay $6 million a year in rent over the length of the lease. (For a full recap of the original stadium development agreement, read this Site Selection Online Insider report from last November.)

"We hope to have a signature water element inside the park to pay homage to the significance and historical importance of the nearby Chattahoochee River," says Schuerholz. "This is still being discussed and planned, but our goal is to make sure that our new ballpark embodies those elements that make Atlanta so attractive to so many people - the water, the trees, the history and the people who live here." 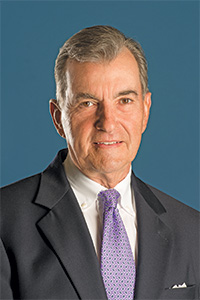 "The feel of the environment at our new ballpark will be much more intimate than Turner Field. The playing field and the stands will be much closer to each other so that our fans don't feel like they are so far away from the field and the players."
- John Schuerholz, President of the Atlanta Braves

From a media and technological standpoint, the new stadium will be the most advanced of its kind, says Schuerholz of the park being designed by noted sports architectural firm Populous, whose various baseball stadiums have garnered "Ballpark of the Year" honors eight times. Its most recent award winner is El Paso's Southwest University Park, home of the El Paso Chihuahuas of the Pacific Coast League (documented in this Online Insider report from March 2013).

"Populous has designed nine of the 10 most recently built Major League Baseball stadiums," Schuerholz notes. "They all have distinct features. Nobody's will look like ours. Ours will have more hospitality areas, more luxury high-end areas for our fans, and the most modern media and technology available in any stadium in MLB."

Even better, adds Schuerholz, is the fact "that our fans will be spending a lot less time getting to and from our ballgames. Most of our fans live in the northern corridor of metro Atlanta, and this new park in Cobb County, at the interchange of I-75 and I-285, will be so much closer to where they live and work."

Those same fans will also, for the first time, have an enticement to come early and stay late, the team's president says. Unlike Turner Field, which since 1997 has not had much positive development around it, the new stadium will be part of a master-planned, mixed-use community that will feature more than $400 million in entertainment, retail shops, restaurants, clubs, taverns, office space and other places to draw and keep fans at all times of the day and night.

This is the pivotal factor in the team's decision to relocate, says Schuerholz.

"For the first time since we have come to Atlanta, our fans will be able to come early and enjoy a nice dinner or stay late after the game and enjoy themselves. They won't have to just get in their cars and drive home," he says. "I believe that this will have the added benefit of extending out the traffic patterns and alleviating traffic congestion, both before and after our ballgames."

The Braves - owned by Liberty Media Corp. in Englewood, Colo. - always wanted that type of experience for their fans at Turner Field, notes Schuerholz. It just never happened. The Braves have played on the south side of downtown Atlanta since 1966, the year the team moved from Milwaukee to the then-fledgling capital of the new South.

The club announced last Nov. 11 that the 2016 season will be the team's final one at Turner Field, which was originally built to host the 1996 Summer Olympic Games.

"We like our new site for a number of reasons," the club president says. "It has a robust highway system around it. Both east-west and north-south, it has great access. It has a pristine 82-acre site that we love. It seemed magical and exactly what we were looking for. In fact, we want our fans to know that the Braves are absolutely committed to the re-beautification of this site once we are finished building our new stadium. And we also want our fans to know that the character of our new ballpark and the mixed-used development around it will both reflect the natural beauty of this area."

The biggest reason for the move, though, is improved fan access, he adds. "This brings the Braves to the front door of where the majority of our fans are located," the team president says. "It also reflects the fact that the Braves are a regional draw. We have adopted the Southeast as Braves country and they too have adopted us. We believe that this new stadium site and the development around it will be a regional draw."

The Braves draw about 2.5 million total fans per season, which ranks the team near the middle of the pack in the National League. The new stadium will have 42,000 seats, about 8,000 fewer than Turner Field. 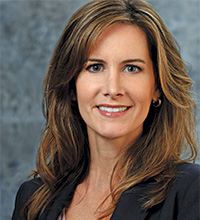 "This is a huge deal for the CID, Cobb County and the entire metro Atlanta region. We will be adding an entirely new live-work-play fabric to the district."
- Malaika Rivers, Executive Director of the Cumberland Community Improvement District

Schuerholz adds that the Braves "tried really hard to have that big draw at Turner Field, but it never came together. Creating a vibrant, mixed-use development around the ballpark just seemed like the right thing to do. Look at what the Cardinals have done in St. Louis. Their new baseball village was just completed, and it is exactly what they had hoped for - a live-work-play environment with lots of walking spaces. It's a trend sweeping the country, and we will have that right here where we play our games."

He adds that 710,000-resident Cobb County proved very attractive to the Braves as well. "The growth taking place here is a reflection of the attractiveness of that area," says Schuerholz, a Cobb resident himself. "This explains why so many people and companies have migrated here."

The US Census Bureau ranks Cobb as the most educated county in the state and 12th among all counties in the country. More than 44 percent of all adults age 25 or older in Cobb have attained a bachelor's degree or higher. The median household income of $71,000-plus places Cobb among the 100 wealthiest counties in the nation.

The Transformation of Cumberland

The Cumberland CID is home to many large companies, including the corporate headquarters of The Home Depot and Genuine Auto Parts. Cobb has also become a thriving biomedical hub as life-sciences employers gravitate to an area known for its highly educated workforce and high quality of life. Cumberland boasts more than 24 million sq. ft. (2.2 million sq. m.) of office space. Over the last four decades, Cobb has also ranked as one of the fastest-growing counties in America in population.

"We will add to Cobb County's draw and quality of life with restaurants, hotels, office and residences that will be part of our mixed-use community," Schuerholz says. "It will be totally unique in Major League Baseball."

Malaika Rivers, executive director of the Cumberland CID, says the Braves stadium announcement is the biggest news to hit the district since the CID was founded 26 years ago.

"This is a huge deal for the CID, Cobb County and the entire metro Atlanta region," she says. "We will be adding an entirely new live-work-play fabric to the district. We already have a world-class performing arts center and amazing access to National Park land. This will undoubtedly spur on more retail development and more commercial growth in this part of southern Cobb."

Rivers says that nearly $2 billion in planned water and transportation infrastructure upgrades in South Cobb will transform the area - already home to Cumberland Mall and the Cobb Galleria - and give it "tremendous access and mobility."

These improvements will "double the ante on additional investment in transportation infrastructure," she adds. "It is catalytic. There is already a strong business presence here, and this will only make it stronger. Cumberland is Cobb's largest economic engine, and this new development will only enhance that."

Even before residential construction begins in the Braves' mixed-use development, some 3,000 new dwelling units are planned for the CID, says Rivers. "I have been with the CID for 18 years, and this is by far the most activity I have ever seen in our district."

Rivers says the Braves' investment into Cumberland and South Cobb sends a strong message to other corporate executives: "Come and invest here. Buy your tickets and your seats early and get the best view in the stadium," she says. "It is not just about building a stadium. It is about building a place where people want to live and grow."

Adds Schuerholz: "This will become a destination. People will want to come here and bring their families and friends. This will create some full-time energy for our new neighborhood. The energy and the spirit of this project is a big component for us." 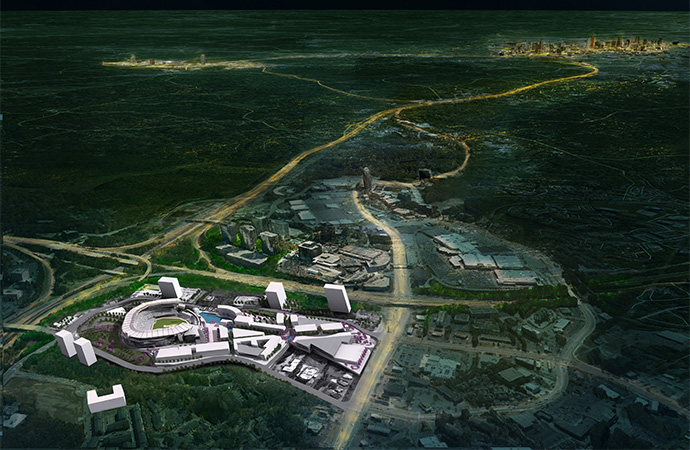 If this image reminds you of the final scene from "Field of Dreams," it might not be by accident. Located at the northwest quadrant of the interchange of I-75 and I-285, the Braves’ new location will feature 14 access points from major roadways.
Illustration courtesy of the Atlanta Braves