Seeking to embody its members’ ideas as well as serve their needs, IFMA’s new world headquarters sparkles with modesty. 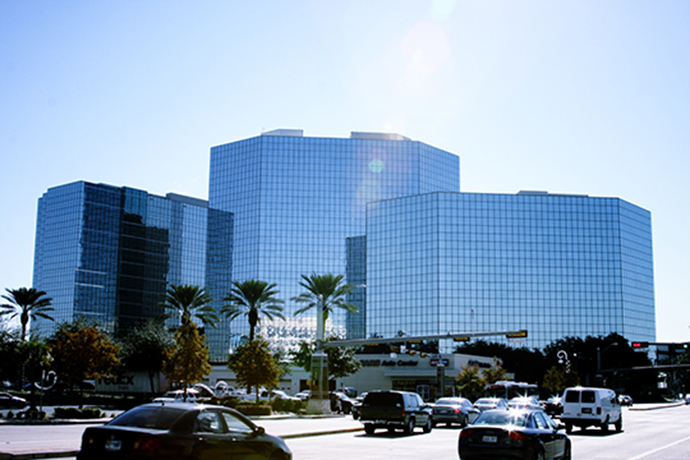 IFMA looked at 15 different buildings before deciding to move into a 50-percent smaller space in the heart of Houston’s Memorial City.
Photos courtesy of IFMA
By DEAN BARBER 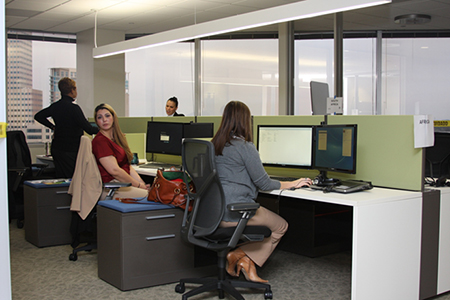 At IFMA’s new downsized headquarters in Houston, partition levels are kept low to promote interaction among staff. There are no assigned office spaces for employees.

The International Facility Management Association supports about 23,000 members who manage more than 37 billion sq. ft. (more than 3.4 billion sq. m.) of property in 78 countries. IFMA's mission is simple — "to advance the facility management profession" — and it does this in a variety of ways.

One is leading by example, which is precisely why the growing organization recently moved into a new, smaller space for its world headquarters in Houston.

"Our members are leading edge on facility management best practices, and we as an organization needed to make sure that we were following our own advice," says Tony Keane, IFMA president and CEO. "With the new facility, we've put theory into action."

IFMA moved into its new headquarters, which it calls the "Service Center of Excellence," on Dec. 26, 2012, although its official opening is today, Feb. 21. The move followed a process of listening to both staff and stakeholders about how the workplace of the future should be designed and operated.

The result was office space that is more functional, flexible, and serves as a resource to staff and members rather than a place of work. The desire was not to build out and make a statement to impress simply because the organization was growing.

"We were not looking for an iconic statement," Keane aid. "What we were really [wanting] to do was look at some of the leading practices in workplace design and relationship facility management and [bring] the aspect of sustainability into the process. When we combined those factors, we felt that we would come up with a much more productive workplace. The result was an almost 50-percent smaller footprint."

The new center is housed in 11,000 sq. ft. (1,022 sq. m.) Staff currently numbers 58, although it is seldom that all would be required to be on site. That is also by design. However, says Keane, "if we had every person show up at the office and then some, we could handle it."

IFMA looked at 15 buildings before deciding on one in the heart of Houston's Memorial City. It was chosen with sustainability in mind. The development density of the immediate area and community connectivity meant that many amenities were within walking distance, says Marina Badoian-Kriticos, sustainability director at IFMA.

"We didn't want staff to waste their time by having to get into their cars to go to lunch. We wanted amenities within walking distance," she says. "By knowing exactly what we wanted to achieve from the beginning, IFMA found ingenious ways to integrate sustainable features and behaviors into the facility in manners that improve productivity and save money."

The building itself is a high-performance facility with an ENERGY STAR rating of 98, she says.

‘You want to grow your business, not your space.'

Marc Liciardello, chairman of the IFMA, headed a steering committee during part of the process of finding the right building and transforming the leased space into a vision of how it would relate the organization's goals and the work of staff. The result was a workplace and a philosophy that enables staff to successfully work offsite and while fostering a spirit of innovation and collaboration.

"When you look at space and you think about the average time that a person is in their assigned space, it's only 32 percent of the time, so essentially for every dollar that we make we are throwing 68 cents out the window," says Liciardello, vice president of corporate services at Philadelphia-based ARAMARK. "Most offices are cellular and are not collaborative and not designed to help productivity.

"Our Service Center of Excellence is a radical departure but is also becoming more and more mainstream as people are starting to get this," he says. "People need to have choice and be empowered to work in more productive ways. That is what they want and that is what we were aiming for. You want to grow your business, not your space."

Keane says the basic premise of the interior design is that the office "is a tool or a resource to the staff but not necessarily a place that you have to come to."

Liciardello says IFMA leadership made the conscious decision, after listening to its members, to untether staff from the workplace in order to promote productivity and innovation. The newly designed center, in short, enables people to thrive at work whether they are on the premises or off.

"It creates an atmosphere of risk taking and trust," Liciardello says. "New technology is the enabler that allows you to break certain tethers. A lot of workplaces are actually barriers to work, and we wanted this place to enable work through the use of technology."

It is a designed departure from the traditional office where people work from assigned spots.

"In the old days, I would have a corner office because I am the CEO. But when I am on the road, that is just wasted space because I am not utilizing it," Keane says. "Now we have subjective space that I can utilize or anyone else on the team can utilize. I have the flexibility of going into a room or I can be in an open office environment if I want to be interacting with staff. So there is a lot of different flexibility."

Interacting with staff and keeping them engaged is the challenge if you are encouraging them to also work remotely, Keane says. All staff are provided with laptop computers, and video conferencing capabilities are set up in meeting rooms.

"One aspect of moving to a mobile work environment is that you have a tendency to lose that interaction," Keane says. "And that was a concern of mine. So with some of our savings from moving into a smaller footprint, we made the decision to invest in video technology. On everyone's desktop, they can talk to a fellow colleague within the organization. So it really doesn't matter so much where they are located as they still are getting that face-to-face contact."

Multiple conference rooms and smaller meeting rooms were included in the headquarters floor plan to encourage spontaneous conversation, Keane says. Low partition panels are used to foster an atmosphere of collaboration, and employees don headphones to cut out background noise when they are on the telephone.

More importantly, no one is assigned office space.

"We have removed the link between titles and status and office. Nobody has assigned office space. We all have space that is flexible for anybody to participate in," Keane says. "So it is a smarter approach by using technology and meeting their needs based on their whole life integration, and to service our members who are located around the world."

"It is important for our staff to remember that we are a global organization serving customers and members around the world," Keane says. "So it is a constant and physical reminder of that, and it really helps everyone to think about how we work."

Liciardello says design, function, purpose and philosophy all melded together in creating the new headquarters.

"Purposefully designed, constructed and operated facilities enable people to thrive, innovation to occur and organizations to excel," he says. "The Service Center of Excellence has been developed through a highly inclusive and transparent process that brought together world-class FM practitioners and other subject matter experts to deliver a workplace aligned with and supportive of IFMA's global vision." 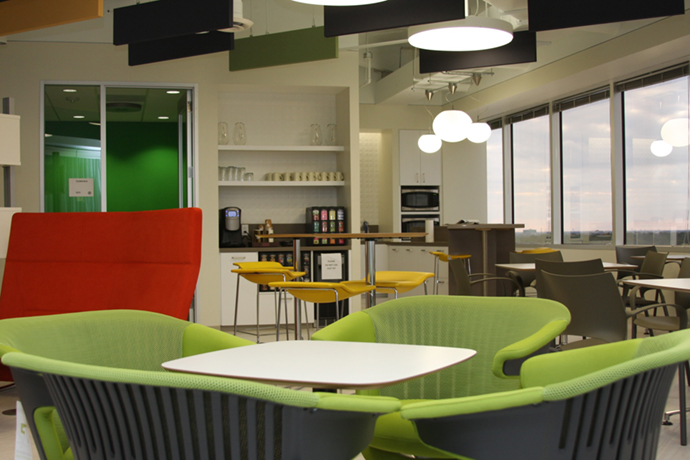 At the IFMA’s new Service Center of Excellence, common open areas promote flexible use and interaction among staff.