Seven years after Katrina struck its plant and its people, a
global water purification company comes home to Louisiana.

Right is a rendering of MECO’s planned $11-million plant in Mandeville, La. Left is a photograph of what the company faced seven years ago this week, when Hurricane Katrina destroyed its original plant on New Orleans’ Industrial Canal.
All images courtesy of MECO
by ADAM BRUNS 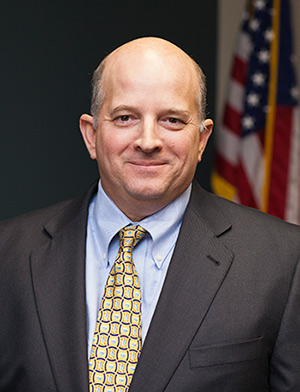 This week marks the seventh anniversary of Hurricane Katrina striking New Orleans. This summer marks a milestone in one company's comeback from that storm's devastation.

MECO Inc., founded more than 80 years ago in New Orleans as Mechanical Equipment Co., announced in June that it would invest $11 million to construct a new 80,000-sq.-ft. facility at the Alamosa Business Park in Mandeville, St. Tammany Parish, La., that would create 127 new direct jobs, retain 81 existing jobs and result in 168 new indirect jobs. The company creates tailored water purification systems for the pharmaceutical, marine oil and gas and defense industries, conducting business around the world.

"This new facility is an opportunity to substantially increase our production capacity and further improve efficiencies," said President George Gsell. "It will position Louisiana at the forefront of one of our most pressing environmental issues — maintaining a supply of fresh water."

MECO is scheduled to complete work on the new site by the end of 2013. While the facility is under construction the company will gradually increase employment and continue to add jobs until all 127 positions are filled by 2018.

Seven years ago, Gsell relates, such a project would have been hard to visualize. That's when the company's facility on New Orleans' Industrial Canal, built in 1955, took the brunt of Katrina.

"It was completely destroyed," says Gsell. "Eighty percent of our employees lost their homes. We lost all of our tools, and every piece of inventory we had. There was absolutely nothing left."

The company moved to Sugar Land, Texas, in the Houston metro area, for two reasons, says Gsell: abundance of factory and warehouse space and "we could find homes for our employees. People were homeless, their schools and churches were wiped out, and their mothers and brothers and sisters were wiped out too. The only thing we could do for our employees was to help them get back on their feet, and if we did, they could help us rebuild the business." 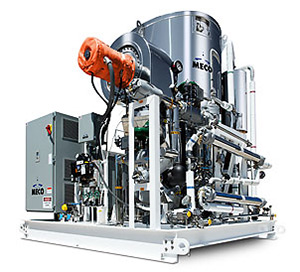 MECO’s vapor compression still is a popular choice for use by the biopharmaceutical sector for the production of purified water.

Rebuild they did. But despite the devastating experience, Louisiana kept exerting its special pull on MECO's employees and leadership. The company eventually leased and then purchased about 50,000 sq. ft. of buildings in Covington, La., for machining and fabrication work, where MECO continues to operate today while also maintaining its Sugar Land operation.

"We didn't know how clients would react when we were destroyed," says Gsell. "We said, 'We're alive and well, and putting ourselves back together. Bear with us.' We had 53 projects in the backlog at the time of the storm, which take an average of six months to build. Two or three dropped off, saying they just couldn't wait, but everyone else stuck with us and said, 'Get to us when you can.' "

Some customers even doubled down, he says, with additional equipment orders, including the military.

"So we said, "Okay, let's get our heads down and get to work. We focused on rebuilding our core business, really worked hard, triaged different things, and eventually we got back to full speed."

Once the firm was on its feet, and also had withstood the effects of the credit crisis, Gsell says, "We started to look at where in the world to put a new facility.

A lot of people would like to manufacture our product overseas. We looked at Texas carefully because we were already there. Texas has a lot of benefits."

But when you're a New Orleans native like Gsell, the call of home can prove irresistible. Add some homestyle attention from state and local officials, and you have a recipe for a homecoming project.

"The only thing we could do for our employees was to help them get back on their feet, and if we did, they could help us rebuild the business."

"They put the full-court press on," says Gsell of the Louisiana team headed by Gov. Bobby Jindal, LED Secretary Stephen Moret and Kurtz. "They did not want to see us leave Louisiana, and rolled out a number of economic incentives and never let go." He is equally complimentary of the tenacity of local parish officials. "Brenda was a real bulldog," he says. "She said, 'Don't go anywhere else. We want you here.' "

The MECO team started to look at sites available on the north shore of Lake Ponchartrain that were not subject to direct hits from hurricanes, and this summer was close to closing on the final land agreement.

MECO products purify water by removing salt, other chemicals and harmful bacteria using vapor compression desalination technology devised by Gsell's uncle, John Potarst, and Potarst's father in the late 1930s. At the time, it was the most efficient way to desalinate water.

"The package machine they tested in the Caribbean could produce 300 pounds of water with one pound of diesel fuel," says Gsell.

When the United States entered the Second World War, MECO entered production, and saw its equipment deployed in the European and Pacific theaters. "That's how it took off," says Gsell. "Even today, fuel and water are the largest logistical drivers in the battlefields." The company continues to make lightweight purifying units for the U.S. Army's tank and automotive command, which has deployed them in Iraq and Afghanistan.

When the oil and gas industry started to move to offshore rigs, MECO's units were a natural fit to make water for the crews. Meanwhile, drug companies were beginning to want distilled water for the manufacture of IV fluids, and MECO equipment again filled the bill. When reverse osmosis came of age in the 1970s, says Gsell, it was a challenge, "but a variety of industries still needed the water quality that distillation offered. We also embraced membrane-based technology. And we've branched out into larger desal plants, all based on membranes. The company has either developed or picked up every technology you can think of for making pure water. Now we just try to produce them."

He says the company's business is roughly split in quarters among oil and gas, pharma, the military and all other industries. All of those sectors, he says, "are focused on quality and execution excellence, as opposed to the low bidder gets the job."

MECO is the leading manufacturer of Vapor Compression stills for pharmaceutical grade water production with over 1000 installations worldwide, generating USP (United States Pharmacopeia) purified and WFI (water for injection) water per hour. Last year, the firm unveiled a new compressor that enhances its Vapor Compression Still technology for the production of USP Purified water and WFI.

In addition to its U.S. base, MECO maintains a network of agents internationally, and employs staff in Abu Dhabi, Scotland and Singapore. Recent contracts have included a three-year program awarded in February for the design and development of advanced shipboard desalination units for the U.S. Navy under contracts with the Office of Naval Research; a waste heat desal system that will use steam by-product from a power generation turbine in Ripon, Calif.; and an enhanced membrane system for an oil and gas firm off the coast of West Africa, where feed water often fouls membranes, but not MECO's.

Another oil and gas contract involves the design and construction of reverse osmosis plant for drinking and process water needs in the extreme arctic conditions off the northeast coast of Sakhalin Island in the Russian Far East. Operating in one of the world's harshest environments, the plant is designed to withstand the effects of and operate in sub-zero temperatures and an earthquake zone.

Back in the Bayou State, Gsell says the business climate is "100 percent better" under the Jindal administration than previous administrations.

"It was frustrating, because we have high-paying jobs, we don't have snow, and we don't have unions to speak of, but they were so focused on tourism and busboy jobs," he says. "I thought, 'This is ridiculous. Let's train more assemblers and welders and machinists.' We've always trained them ourselves."

To secure the project, LED offered MECO a performance-based, forgivable five-year loan of $500,000 through the state's Economic Development Loan Program, and MECO will be eligible for a performance-based, relocation grant of up to $450,000. In addition, MECO will receive assistance from LED FastStart work-force development program, and the company is expected to utilize Louisiana's Quality Jobs and Industrial Tax Exemption incentives. Gsell calls FastStart "a fantastic program. We were very impressed. It's like your own HR department for free."

Gsell is straightforward about what he calls a very bricks-and-mortar business model: "You make machinery and support your customers. We've been a part of the discussion about the water crisis. But when I come to work, it's just building and building some more."

Sort of like MECO's global business. Or this New Orleans native's equally no-nonsense regard for his home state: 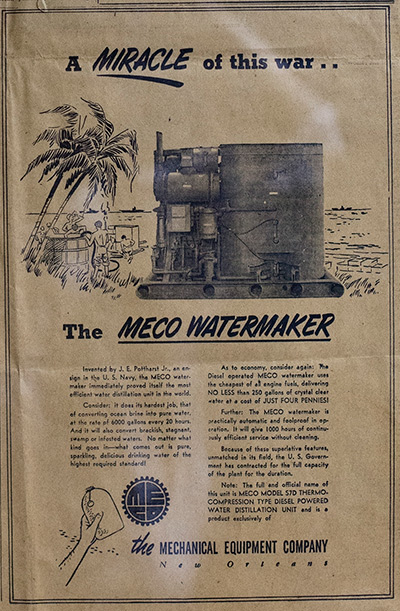 This MECO advertisement appeared in the Washington Post and Evening Star newspapers in January 1945.