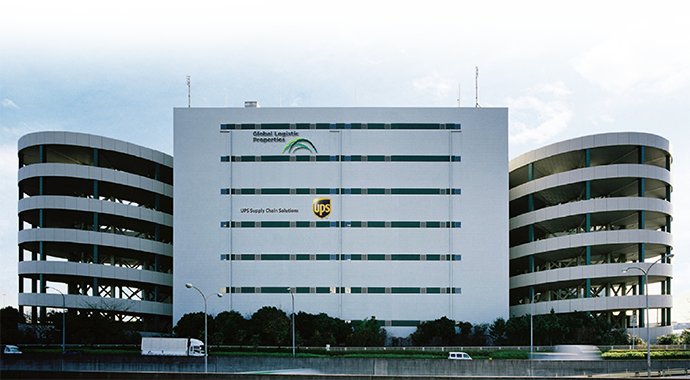 Global Logistic Properties got its start through the 2008 purchase of Prologis assets in China, as well as a stake in Japan. Pictured here is a facility in Greater Tokyo.
Photos and graphs courtesy of GLP
by ADAM BRUNS 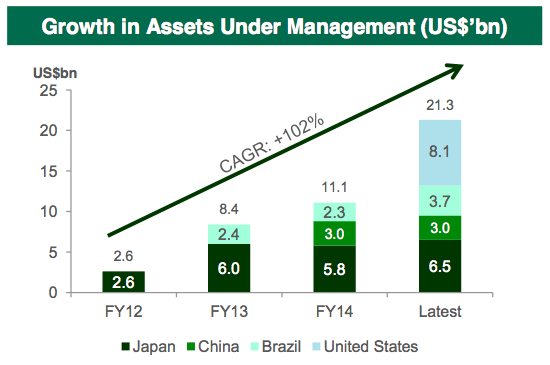 "Increased occupier demand in the US, and with it rising costs which are expected to exceed general inflation, will require logistics facilities to deliver greater efficiencies," said Greg Schementi, head of US tenant representation at DTZ, when the firm released its 2014 Global Occupancy Costs - Logistics report in October 2014. "This is driving the supply of larger, more technologically advanced warehousing in close proximity to urban areas.”

Singapore-based Global Logistic Properties Ltd. (GLP) seems to be onto that trend.

Don't know GLP? Chances are you will soon, as the company in December leapt to third in total managed logistics square footage in the US in one fell swoop.

On Dec. 8, advised by Morrison & Foerster in a co-investment with Singapore sovereign wealth fund GIC Pte. Ltd., GLP committed to buy for $8.1 billion one of the largest logistics real estate portfolios in the United States from the Blackstone Group.

GLP, known for its investments in advanced facilities in Japan, manages 290 million sq. ft. (27 million sq. m.) of logistics properties in China, Japan, Brazil and, now, the US. According to slides its investor relations team made available in December, the value of the company's assets under management have ballooned from a mere $2.6 billion in Japan in FY2012 to $21.3 billion across the four countries.

The company was founded in 2008 when longtime Prologis leader Jeffrey Schwartz, who passed away in November at the age of 55, and Ming Z. Mei (CEO at GLP) partnered with Singapore’s sovereign wealth fund GIC Pte to buy Prologis Inc.’s China operations and a stake in its Japanese property funds for $1.3 billion. The operations were rebranded as Global Logistic Properties in March 2009.

In November GLP expanded its JV with Canada Pension Plan Investment Board (CPPIB) to develop more logistics properties in Japan, bringing the total venture size to $2.2 billion. Together with another investor, GLP and CPPIB also are pursuing a $1.1-billion partnership in Brazil in 9.6 million sq. ft. (891,840 sq. m.) of space, separate from $1.4 billion worth of other Brazilian JVs it’s formed to invest in 40 other Brazilian properties.

Represented by Morrison & Foerster, an affiliate of GLP also invested in the formation of the world’s largest China-focused logistics infrastructure fund.

Kind of a Big Deal 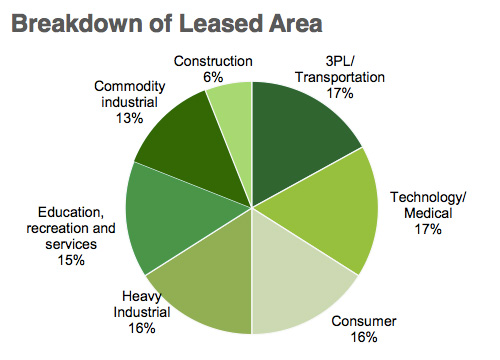 A diverse tenant base is just one of the factors in favor of GLP's big purchase from Blackstone in December.

Called “GLP US Income Partners I,” GLP's December buy marks the firm’s first entry into the US market, and comprises 117 million sq. ft. (11 million sq. m.) of total gross floor area spread across 36 major sub-markets in the US. Just like that, the firm jumps to third behind Prologis and Duke Realty in total US logistics square footage.

Almost a third of that area is in the West, which the company noted “has greater port and distribution traffic,” with the balance more or less evenly split among the other US regions. While the properties serve a total of more than 3,500 tenants, the top 10 by square footage comprise 9 percent of the total. Leading tenants by leased area include No. 1 Whirlpool, Home Depot, Ozburn-Hessey Logistics, Amazon.com, FedEx and Iron Mountain.

GLP said it is acquiring the US$8.1-billion portfolio at a significant discount to replacement cost. “The portfolio is 90-percent leased as of 30 September 2014, with a weighted average lease expiry of 3.2 years,” said the company. “In-place rents are estimated to be approximately 7 percent below market. GLP is focused on increasing the lease ratio in the near-term. Increasing rents and occupancy provide potential for upside.

Standing in the deal's favor, said the company are projected dramatic growth in e-commerce and the rising industrial production associated with reshoring of manufacturing in the US. Online retail sales are expected to grow at 10 percent CAGR over the next three to five years, and there have been 18 consecutive quarters of positive net absorption.

"Lack of construction over the past five years has led to limited new supply of 0.4 percent of total stock per year,” said the firm. “There is stable demand for logistics infrastructure driven by continued growth in retail and e-commerce sales, which are growing faster than GDP.” 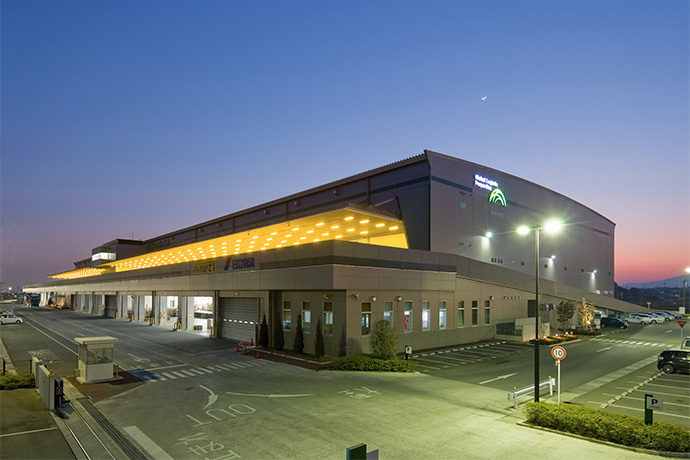 Providing a clean well-lighted place is just one attractive aspect of GLP's portfolio, including this facility in Tosu, Fukuoka, in Japan's Saga prefecture.

The growth continues beyond the US as well: Since the New Year began, GLP already has issued a flurry of new announcements:

"GLP continues to see 3PL providers positioning their distribution networks across China to cater for e-commerce fulfillment and cold chain logistics," said the company. According to the DTZ occupancy cost report in October, the Asia Pacific will see the highest regional cost increase, in percentage as well as absolute terms, over the next three years: "By 2018," the report states, "the cost for one square meter of prime logistics space in Hong Kong and Singapore will have grown by nearly US$40 and US$50, respectively.” 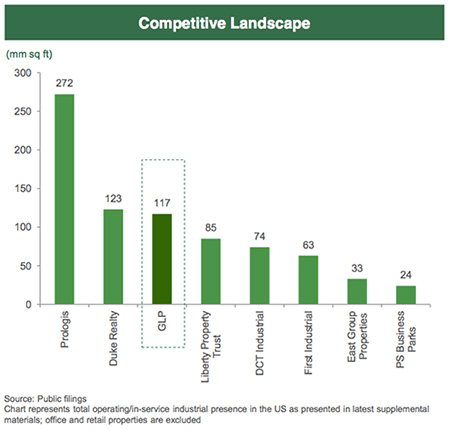 The DTZ report analyzed labor costs too, finding that logistics operators in China and India have access to the most affordable warehouse labor. The average warehouse operative salary in the US is nearly five times higher than in China. However, Asia Pacific has seen the highest increase in labor costs since 2009, reflected by an average annual growth rate of 11 percent, compared to 1.9 percent in the US and 1.4 percent in Europe.

Milena Kuljanin, author of the report, highlighted China in particular, where the Economist Intelligence Unit recently forecast manufacturing labor annual personal earnings growth of 12 percent between 2013 and 2020. Kuljanin said China would remain cost-competitive even against established emerging markets. But in logistics, that advantage might not hold.

“In Shenzhen for instance, warehouse operative wages have increased by more than 15 percent per annum since 2009,” said Kuljanin. “This reflects an imbalance between the demand and supply of labor and also indicates a shift in the economics of global logistics. Future increases in wages and occupancy costs will further reduce China’s cost advantage. Whilst some companies have reshored operations to US and Europe, others are seeking out more affordable inland provinces and neighboring countries such as Vietnam and Indonesia.”

Such trends have not stopped GLP from continuing its China advances.

In a November earnings statement, GLP said it had begun $846 million of new developments in China in the first half of FY15, 80 percent higher than a year earlier. In September the firm completed its $2.5-billion agreement with a group of Chinese state-owned enterprises and leading financial institutions, who now own 33.8 percent of GLP China. "This transaction is expected to enhance GLP’s access to land," said the company, "and generate new business opportunities to drive 30-40 percent growth in China development expenditure for the next three to five years." 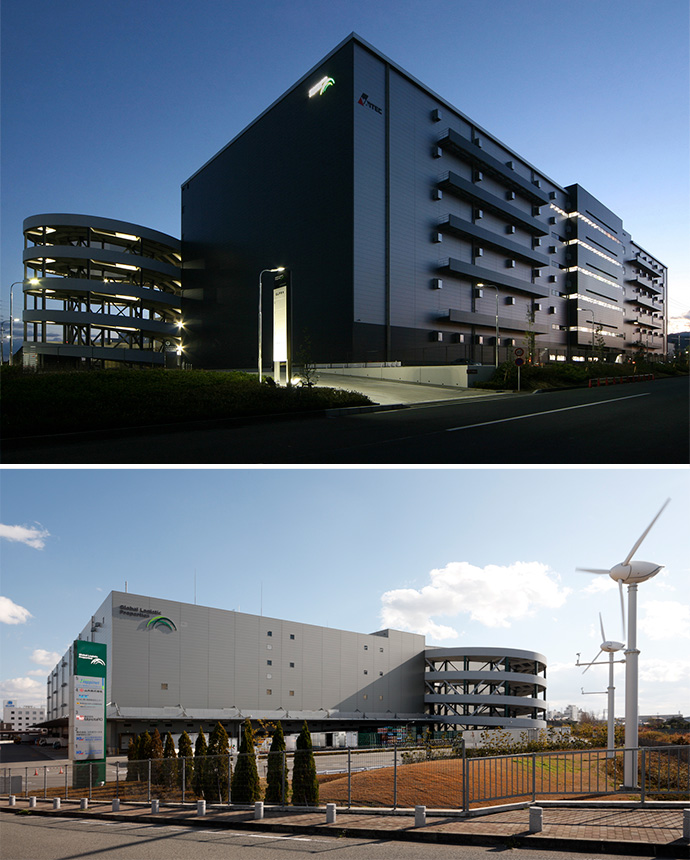 Sustainability is a key tenet of GLP's strategy, alluding not only to renewable energy but a satisfied and productive work force. Modern facility design and amenities are a far cry from a mere warehouse.

DTZ Research’s 2014 Global Occupancy Costs - Logistics report says global occupancy costs will increase "at a modest average annual rate of 1.9 percent to the end of 2018, below the global inflation rate," due in part to a responsive supply pipeline and innovative facilities and operations. GLP has that covered as well. Its 1-million-sq.-ft. (95,000-sq.-m.) GLP Misato III property in Greater Tokyo was the first logistics facility in Japan to receive LEED-Platinum certification.

The project in Saitama Prefecture in October was selected as one of 13 projects worldwide to receive the Urban Land Institute 2014 Global Award for Excellence. Completed in May 2013, it is 100-percent leased.

"Our team in Japan are true pioneers and this award is a testament to their ingenuity and hard work," said Jeffrey H. Schwartz in October when the award was announced. He passed away in November. "Sustainable development remains at the forefront of our goals. We believe this creates a more resilient portfolio overall while improving environmental and social development in the communities in which we operate.”

The five-story facility is equipped with dual ramps allowing service vehicles to drive up to each floor, and is equipped with pioneering features such as seismic isolators that absorb 75 percent of all shock caused by earthquakes, and rooftop solar panels. Other amenities include backup generators, emergency sewage systems, LED lighting, showers and a cafeteria, which GLP says "ensure customers' business continuity while also creating a safe and comfortable working environment for the 500 over employees working at the facility."

“GLP Misato III sets the stage for the future of the logistics market in Japan," said M. Leanne Lachman, jury chairman for the ULI awards and president of Lachman Associates. "It is an excellent example that both environmental excellence and solid financial returns can be achieved through the implementation of innovative measures." 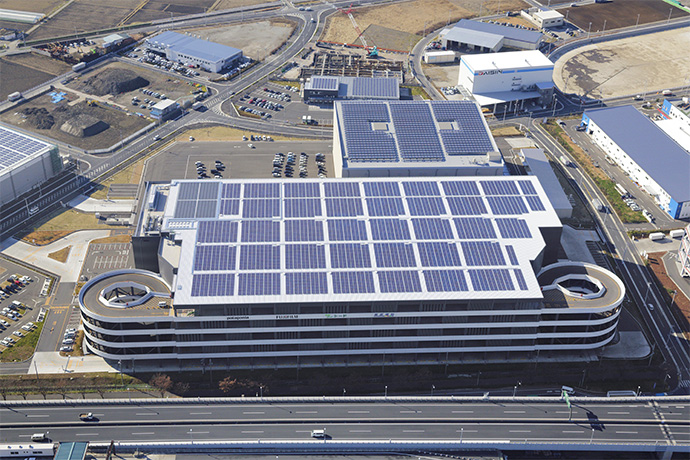 Winner of a 2014 Global Excellence Award from the Urban Land Institute, the LEED-Platinum GLP Misato III project in Greater Tokyo may be the future of logistics facility design.
Photos courtesy of GLP