A compelling session at IEDC’s annual conference sheds
light on projects, talent and the vision to develop both. 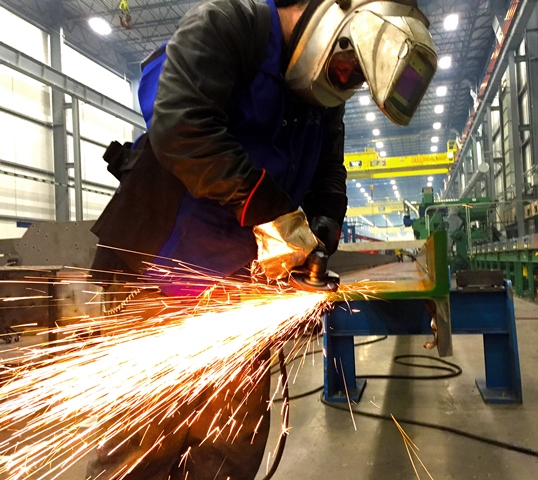 GE Transportation employs more than 500 highly trained and flexible workers at its busy locomotive manufacturing plant in Fort Worth.
Photos courtesy of GE

What happens when you place Texas-based dealmakers in a room full of economic developers?

The answer is plenty of insight into what goes into signing on the bottom line when it comes to project development in the Lone Star State.

In an interactive workshop titled "Ask the CRE Directors" at the International Economic Development Council's Annual Conference in Fort Worth in October, executives spoke frankly and openly about project development in Texas.

Walter Amaya, executive supply chain leader for GE Manufacturing Solutions in Fort Worth, said an extensive site search led his company to choose Fort Worth over competing sites in Erie, Pa.; Boston, Mass.; and Florida for the $100-million, 750-job factory that makes locomotives (originally profiled in this May 2011 Online Insider).

"Locomotives and their components usually don't travel well. They are very big and bulky," said Amaya. "That's why infrastructure is so critically important. Fort Worth has BNSF and great infrastructure for locomotive manufacturing. We needed to be closer to our customers, have access to rail, be close to a port, and have a continuous pipeline of talent. The Dallas-Fort Worth market offered GE just the right combination of all of these things."

The deal known as Project Thomas came together when state and local governments offered GE 10-year city and county tax abatements, a workforce training and hiring package, and about $8 million in roadway improvements. The $45-million-payroll plant represents GE Transportation's first major investment outside of Erie in 100 years.

"We go through big cycles. A lot of our employees are reaching 30-plus years of service," said Amaya. "This is a 1-million-square-foot facility, and we need the best people possible to staff it. We are expert welders of sheet metal. There are 100,000 pounds of metals in one locomotive. A diesel engine is a power plant."

The Texas Enterprise Fund helped GE close this deal, noted Amaya. "We worked closely with the Fort Worth Chamber on this deal," he said. "A special skills grant enabled our workers to receive four weeks of technical training at North Central Technical College just north of Fort Worth. The grant enables us to pay these workers while they receive their training for the jobs in Tarrant County."

GE's Evolution Series locomotives are designed to decrease constituent emissions by more than 70 percent, driven in part by the EPA's "Tier 4" emissions standards. The new engine technology was the result of an initial six-year, $400-million investment, followed by a two-year, $200-million investment to hone the research, design and engineering to meet Tier 4 standards.

Hub for the Future

Asked about that training in a follow-up email interview, Amaya writes that the company has partnered with local and state workforce boards and two community colleges to provide technical training for the vast majority of its Fort Worth workforce (approximately 500 workers). "Our mission is to build one engaged, flexible and accountable workforce focused on safety and continuously exceeding our customer expectations," he says. "The training allows us to achieve flexibility across the shop and build a one-of-a-kind workforce. Every person is qualified on two welds, has a solid level for machine shop math, and is certified for both forklift and crane operations."

"We needed to be closer to our customers, have access to rail, be close to a port, and have a continuous pipeline of talent. The Dallas-Fort Worth market offered GE just the right combination of all of these things."
— Walter Amaya, executive supply chain leader for GE Manufacturing Solutions in Fort Worth

In September the division announced it was hiring 50 more machinists for its engine plant in Grove City, Pa., located about halfway between Pittsburgh and the company's primary locomotive manufacturing complex in Erie. Two years ago GE Transportation invested $40 million in an engine remanufacturing plant in Grove City — the company has invested $100 million there since 2000.

Asked whether manufacturing processes or enhancements implemented in Fort Worth have been transferred or shared with other operations, Amaya offers a larger-scale vision of how industrial plants will work together from now on:

"We recognize that in markets around the world, hardware and software are shaping two powerful forces — the Industrial Internet and Advanced Manufacturing. In essence, this means that all the separate machines and tools which make an industry possible will be 'smart' — connected, data-enabled and constantly reporting their status to each other in ways as creative as our engineers and data scientists can devise. This will increase efficiency by allowing every aspect of our industrial operations to be monitored and tweaked for optimal performance, and reduce down-time. For example, machinery will break down less often if we know exactly the best time to replace a worn part. Our goal at GE Transportation is to leverage advanced manufacturing technologies to create a 'digital thread' of data across our products and within our global supply chain. 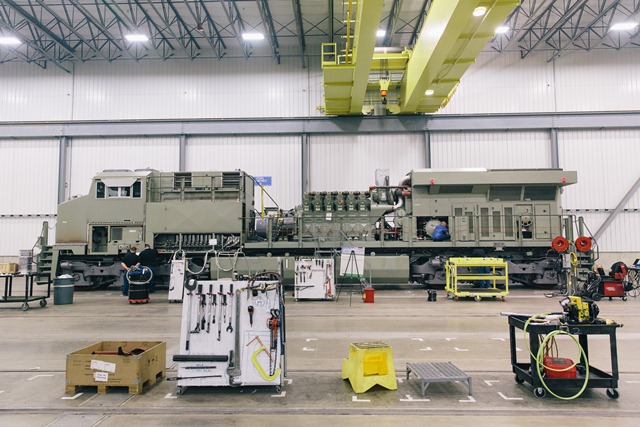 BNSF has ordered 500 GE locomotives, half of which will come from GE's plant in Fort Worth (pictured here), even as its other sites in Pennsylvania continue to grow.

"We have selected two manufacturing sites within GE Transportation as test sites for this work," he reports, "engine remanufacturing in Grove City, Pa., and locomotive manufacturing in Ft. Worth, Texas. Our plan is to leverage what we learn from implementing new technologies and bring these solutions to scale across other sites.

"One such area is a foundation of integrated and scalable IT infrastructure, which both Texas and Grove City are implementing. With this new foundation, we are able to better plan materials, inventory and labor, manage shop floor operations more seamlessly and perform machine health monitoring."

The GE Transportation plant in Fort Worth began a second shift in August, and customer BNSF has ordered 500 engines, with half of them coming from the Fort Worth plant. BNSF operates a major intermodal yard nearby at Hillwood Properties' AllianceTexas development.

Bill Burton, senior vice president of Hillwood Properties, was one of the dealmakers on the IEDC panel. Burton's firm developed and manages the 18,000-acre (7,285-hectare) AllianceTexas logistics and multimodal park in Fort Worth. He said deals like GE's don't happen without the patience to build long-term relationships.

"It is always a process," said Burton. "You don't just call when there's a deal to be had. Mass mailings don't work. You can't be focused on winning the deal today - it's the deal five years from now."

But AllianceTexas is still the crown jewel. The 25-year-old development of H. Ross Perot has paid more than $1 billion in property taxes since its inception, noted Burton. And its Foreign Trade Zone is routinely ranked at or near the top in the nation in terms of value of foreign goods admitted.

"It opened when everything in the economy was under water," said Burton. "We had to have the initial seed of public investment to make this work. The city had to annex a lot of property that was 18 miles north of downtown. But look at the success of this development today and what it has meant to the entire DFW economy." 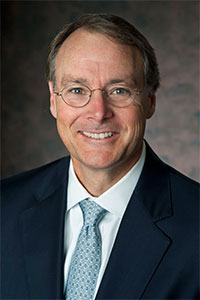 "You can't be focused on winning the deal today — it's the deal five years from now."
— Bill Burton, senior vice president, Hillwood Properties

The latest figures for AllianceTexas include more than 370 corporate residents and more than 37,000 direct jobs created; total private investment of $7.6 billion; and a cumulative economic impact from 1990 through 2013 north of $50.6 billion.

Burton noted that Hillwood "built our platform on logistics and ports. On the logistics side, real estate is the tail wagging the dog. Transportation is 60 percent of the cost, labor is 30 percent, and real estate is less than 10 percent. Labor is critical today." 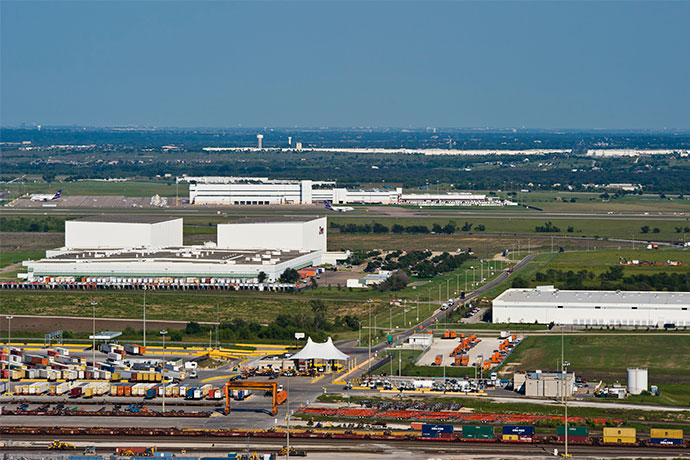 Since 1990 Hillwood’s AllianceTexas development has welcomed total private-sector investment of $7.6 billion and through 2013 has had an economic impact north of $50.6 billion.
Photo courtesy of Hillwood