Tis the season for Amazon.com to make news by the
millions of square feet. But it’s not all about the warehouses. 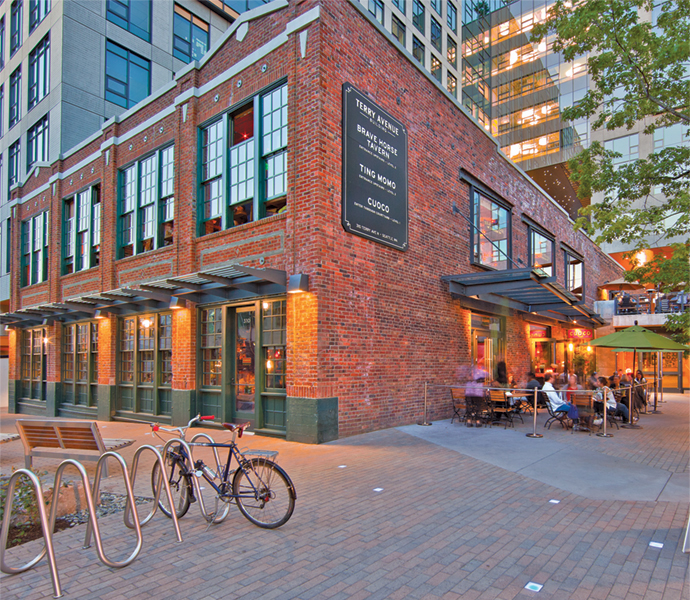 Historic Seattle’s 2013 Best Rehabilitation Project Award went to Vulcan Real Estate (master developer), Amazon (owner as of Dec. 2012) and their partners for the renovation of the Terry Avenue Building, which was designed in 1915 as a warehouse and is now part of Amazon’s corporate campus.
Image courtesy of Vulcan
by ADAM BRUNS
Amazon Seattle Space Take Down History

Amazon is pursuing its usual pre-holidays hiring ramp-up, even as it ramps up the number of e-fulfillment centers that will welcome most of those employees.

Earlier this week, news broke of two new e-fulfillment centers in Florida and another in Baltimore, which among them will create 2,000 jobs.

In July, the company announced it was creating more than 5,000 jobs across its fulfillment network, which in the year up to that point had grown by eight locations. At that time — a whole three months ago — Amazon employed over 20,000 full-time employees in its US fulfillment centers, and had openings at 17 of them.

On Oct. 1, the company said it is creating more than 70,000 full-time seasonal jobs across its US fulfillment centers this holiday season in order to meet an increase in customer demand — a 40-percent rise over last year.

In 2012, Amazon converted thousands of seasonal employees into regular, full-time roles after the holidays, and expects to do the same this year, said a company release. On average, seasonal employees earn 94 percent of Amazon fulfillment center employee starting wages and are eligible for health care benefits. And that median pay inside Amazon fulfillment centers is 30 percent higher than that of people who work in traditional retail stores — not counting the stock grants that full-time employees receive, which over the past five years have added an average of 9 percent to base pay annually. 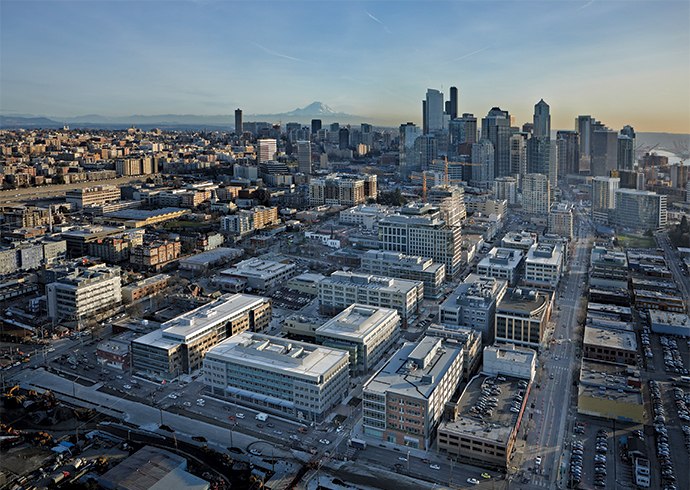 Amazon on Dec. 21, 2012, became the official owner of its 1.8-million-sq.-ft. downtown Seattle campus, which it purchased from developer Vulcan Inc. for just over $1.15 billion.
Image courtesy of Vulcan

“So far this year, we have converted more than 7,000 temporary employees in the US into full-time, regular roles, and we’re looking forward to converting thousands more after this holiday season,” said Dave Clark, Amazon’s vice president of worldwide operations and customer service, on Oct. 1. “Each year, seasonal jobs lead to thousands of long-term, full-time roles in our sites — jobs that offer great pay, benefits starting on day one and the chance for employees to further their education through our Career Choice program.”

Here’s how that works: Amazon will pre-pay up to 95 percent of tuition for courses related to in-demand fields, regardless of whether the skills are relevant to a career at Amazon. Amazon will pre-pay an eligible employee’s tuition up to $3,000 per year or up to $12,000 over four years. Since the program’s launch last summer, employees are pursuing degrees in game design and visual communications, nursing, IT programming and radiology, to name a few.

Since the start of the financial recession in September 2008, Amazon has added more than 40,000 jobs in the U.S. across all parts of the company. 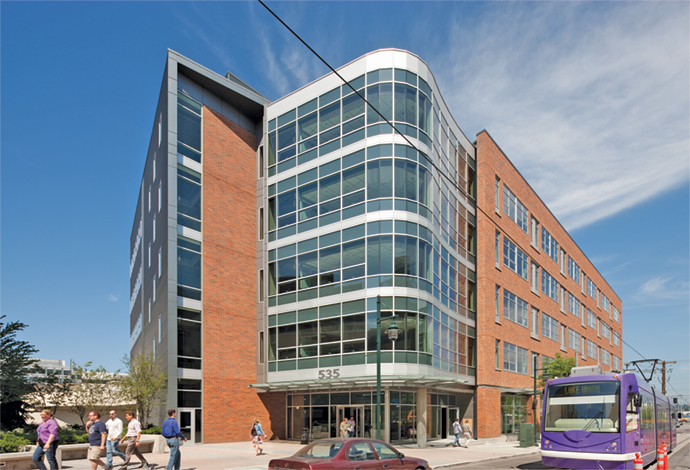 A signature feature of Amazon’s South Lake Union campus is a combination of pedestrian friendliness and easy access to transit.
Image courtesy of Vulcan

Jeff Bezos’ company is contributing in different forms throughout its home city, where Seattle’s Museum of History and Industry’s Bezos Center for Innovation launched Oct. 12, 2013, thanks to his $10 million.

Amazon’s 1.8-million-sq.-ft. campus in South Lake Union (pictured), developed by Vulcan Real Estate, was a finalist this year for the Urban Land Institute’s Global Awards for Excellence, which will be announced early next month at ULI’s fall meeting at Chicago’s McCormick Place Nov. 5-8.

Integrating public plazas with LEED-certified buildings and amenities such as dining, bike storage, Zip Cars, and electric vehicle charging stations, as well as easy access to public transportation, the South Lake Union project created 4,000 construction jobs and thousands of permanent jobs in Seattle, and will generate an estimated $9.5 million in new tax revenue annually. In addition, the project has spurred expanded transit services throughout the neighborhood and generated $5.7 million for affordable housing.

Amazon is pursuing its own construction of another development in the city’s Denny Triangle area, where the layout will include three office towers and three biodome-like greenhouses.

Projects from Amazon, in fact, are so varied and rapidly paced they can be hard to track — even in Seattle alone. So we asked the media relations firm working with Vulcan if a comprehensive list was available to give us a complete picture. That list appears below.

Altogether, once current projects are moved into by 2018, the company will have occupied more than 7 million sq. ft. of space in Seattle since 2007 via 20 separate projects, half of them involving Vulcan.

The completion timing for two of the three towers Amazon is developing itself is an estimate, and will depend on Amazon’s growth trajectory.

Here’s how that growth trajectory has been going: Amazon, all of 18 years old, as of the second quarter this year had 97,000 full-time and part-time employees worldwide, up 40 percent from 69,100 at the same point in 2012.

Its second-quarter sales were up by 22 percent year-over-year, to $15.7 billion. However, free cash flow for the 12 months ending June 30 was down, owing mainly to “fourth quarter 2012 cash outflows for purchases of corporate office space and property in Seattle, Washington, of $1.4 billion.”

Its third quarter guidance, released in July, said net sales were “expected to be between $15.45 billion and $17.15 billion, or to grow between 12 percent and 24 percent compared with third quarter 2012.” 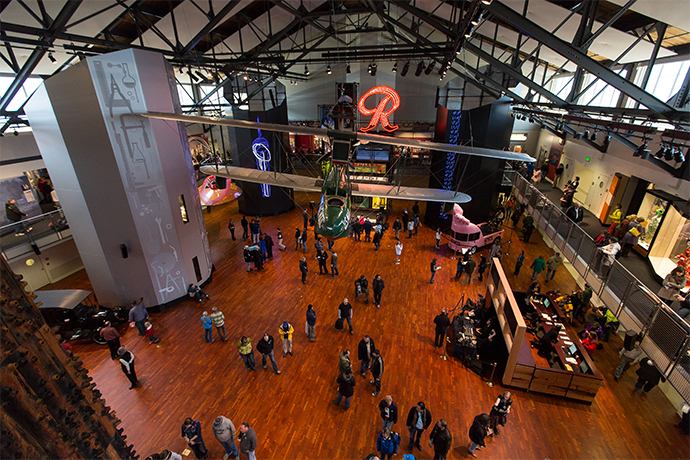 Seattle’s Museum of History & Industry, where the $10-million Bezos Center for Innovation launched earlier this month, pays tribute to another major employer before e-commerce behemoth Amazon came along. Hanging in the foyer is the first plane Boeing ever built, the Boeing B-1, assembled in 1919 and used for delivery of the U.S. Mail. Why no wheels? It usually landed on Lake Union, just outside the museum, in the district where Amazon’s amazing take-down (or takeover) of Seattle office space continues.
Photo courtesy of MOHAI