While expansion moderates in some Eastern European countries, it will heat up in Lithuania, Latvia and Slovakia.

Although the Central and Eastern European economies continue to lead the Continent, their economic growth will likely power down in 2016. The slowdown will be uneven across the region, however: While expansion will moderate in the Czech Republic, Hungary, Poland, Romania and Estonia, it will heat up in Lithuania, Latvia and Slovakia.

Household spending will continue to fuel the growth, supported by a favorable labor market and rising wages, but fixed investment growth will ease, mainly thanks to slower capital flows from EU funds and soft foreign demand.

Net exports will not add much to the region’s expansion. Because a high share of consumption and investment goods is imported from abroad, strengthening domestic demand will drive up imports and dampen net exports. Exports are also sensitive to imports in most CEE countries since the region’s manufacturers must import components before exporting the final products to Germany, their main trading partner. Softer demand from emerging markets, and China in particular, is also keeping a lid on exports, and a further disruption in exports and investment to Russia may cut Germany’s shipments, which would weigh heavily on the region’s exporters.

While fixed investment got some temporary lift in 2015, consumer spending will get a boost from accommodative fiscal policy this year. Household disposable income will increase thanks to a 1-percentage-point reduction in personal income tax rates in Hungary; higher minimum wages in the Czech Republic, Hungary and Slovakia; and broader social benefits in Poland. The Polish government will pay low-income families a monthly subsidy of PLN500 (US$126) for their first child, and extend the subsidy to all families having a second child or more. (The program is projected to cost the equivalent of US$4.8 billion in 2016.)

A hike in public-sector salaries in the Czech Republic and Romania should encourage households to spend, while nominal wage growth will accelerate in the private sector this year. With joblessness dropping below the natural rate of unemployment in many countries, employers will find fewer suitable workers and the tighter labor market will drive up wages. Real wages won’t spike as much in 2016 as they did last year with inflation picking up, but annual growth rates hovering around 3 percent should be enough to boost household spending. 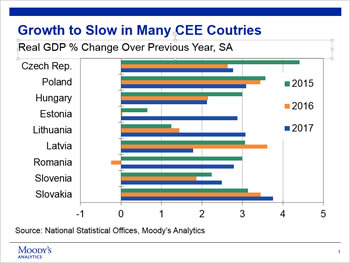 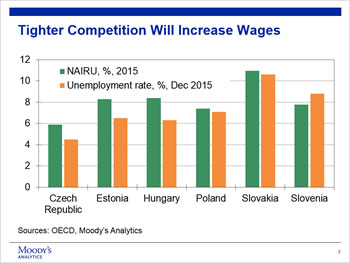 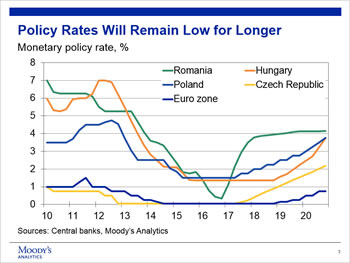 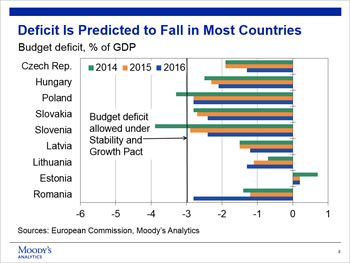 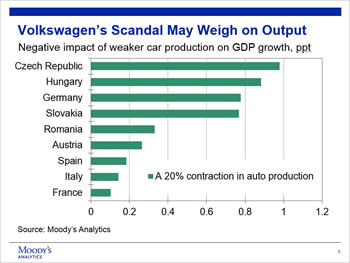 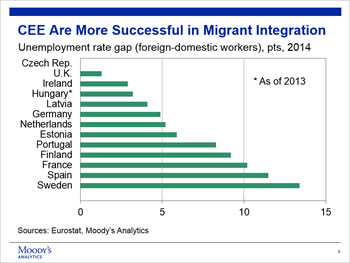 Despite the steady growth, though, consumer price inflation will remain subdued across much of the CEE region. Domestic demand is firming, but falling import prices and low oil prices are keeping consumer prices from rising. Because most CEE countries are price-takers — they do not have the power to set their own prices and must instead follow global prices for agricultural products and energy — the region will face imported deflation pressures in 2016.

Therefore, the success of the European Central Bank’s accommodative monetary policy to move euro zone inflation closer to the 2 percent target is crucial for CEE economies. If the ECB fails to rev up inflation, then sustained weak import prices will prompt other central banks in Europe to ease monetary conditions further.

In early February, the Czech National Bank confirmed that it will maintain a cap on the koruna so that it does not appreciate beyond CZK27/EUR until at least the beginning of 2017. With inflation approaching the CNB’s target of 2 percent, the central bank will likely remove the cap in the first half of 2017, later than previously expected. Only then will the bank consider interest rate hikes.

We expect the CNB will raise the policy rate in the third quarter of 2017 at the earliest. But if the ECB expands and extends its quantitative easing program beyond March 2017, the rate increase in the Czech Republic may be postponed further.

Hungary’s central bank announced that it would use unconventional tools to counter low inflation. First, the bank said that it would phase out its two-week deposit facility, effectively squeezing out money parked there by commercial banks. Second, the bank announced in January that it will increase the amount offered at interest-rate swap auctions by 20 percent to provide additional support to banks purchasing government debt. The main beneficiary of these measures is likely to be government bonds — some banks are already shifting into forint-denominated bonds.

Despite ongoing deflation, the National Bank of Poland left the key policy rate on hold at 1.5 percent in early February. For the moment the central bank is in a holding pattern, preventing excessive risk taking. Rates that are too low could discourage savings and encourage riskier behavior among investors and households.

Thanks to the robust expansion, public finances across Central and Eastern Europe (except Lithuania) have been steadily improving. But while all CEE economies are expected to meet the Maastricht criterion of a government deficit-to-GDP ratio of 3 percent or less in 2016, political changes could halt fiscal improvements. If Poland’s new government leans hard toward fiscal easing, the country may break the fiscal limits of 3 percent of GDP, triggering the EU's Excessive Deficit Procedure.

This could put pressure on the zloty and government bond yields, especially when public debt is already approaching a constitutional debt ceiling of 60 percent of GDP. Breaching it would trigger drastic budget cuts in subsequent years.

Similarly, Romania’s newly appointed government is sticking to the fiscal laxity approved by the previous administration. A 10-percent salary increase for public servants and a reduction of the value-added tax to 20 percent from the current 24 percent may destabilize the budget for 2016, with the fiscal deficit rising close to 3 percent of GDP.

Manufacturing Holds Its Own

With limited exposure to China’s ailing economy, the slowdown in Germany and the Volkswagen scandal are the main downside risks for the CEE countries.

The auto industry’s contribution to value-added and employment varies markedly across the region, but for Hungary, Slovakia, and especially the Czech Republic, auto production is a cornerstone of the economy. If Germany falters, other countries in the supply chain would also suffer as cost-cutting by VW’s suppliers and falling sales of diesel cars weigh on the economy. Assuming a 20-percent drop in auto production (which is similar to the 2008-2009 crisis) due to lower demand for diesel cars, the Czech Republic’s GDP would fall by one percentage point while Hungary’s and Slovakia’s GDP would shed 0.8 percentage points.

Despite the risks, manufacturing has held up well in the CEE economies. The purchasing managers’ index (PMI) climbed to 56.9 in the Czech Republic and to 53 in Hungary in January, signaling further improvement in business activity. Although Poland’s PMI slid to 50.9, it remains above the long-term trend. Auto production remained the most vital sector.

Although the CEE nations are not target countries for immigrants, and are actually reluctant to accept a larger number of refugees, the strong manufacturing sector could help better absorb low-educated migrants, benefiting local economies. The CEE countries are also more successful in immigrant integration: The difference between the unemployment rate of foreign-born and native-born workers is zero in the Czech Republic and relatively low in Hungary and Poland, compared with their Western European counterparts.

Wage equality between native-born and foreign-born, and the lack of overqualification, are also creating favorable conditions for immigrant integration. So far, however, the CEE countries have accepted mainly refugees with a tertiary education, which is largely why foreigners had a higher median salary than domestic citizens across the CEE region. Nevertheless, sending immigrants where their skills may better match the local economy can benefit both sides. 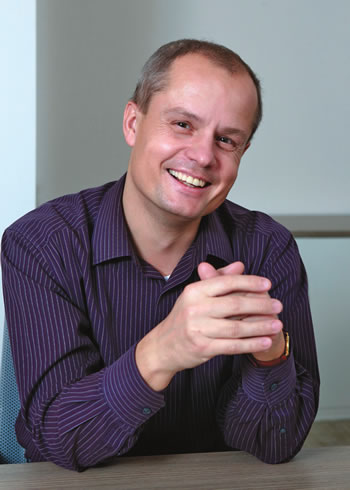 Tomas Holinka, based in Prague, is an economist at Moody’s Analytics, a unit of Moody’s Corp. that helps capital markets and credit risk management professionals worldwide respond to an evolving marketplace with confidence. The company offers unique tools and best practices for measuring and managing risk through expertise and experience in credit analysis, economic research and financial risk management. For more information, visit www.moodysanalytics.com.