‘Sweet Home Alabama’
Is No. 1 Again

In an encore to a championship season in Tuscaloosa, Huntsville gets its own trophy in Toyota-Mazda's $1.6-billion project. 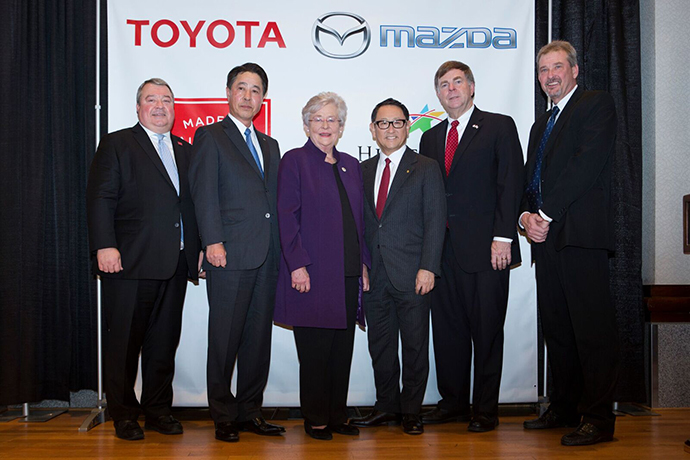 As surely as the University of Alabama remembers the Crimson Tide’s football playoff loss to Clemson last year, the State of Alabama recalls the sting of losing Volkswagen to Tennessee back in 2008, when the automaker chose Chattanooga over Huntsville for a billion-dollar plant where it now makes SUVs.

“There wasn’t any pay in finishing second,” says Huntsville Mayor Tommy Battle of the Volkswagen defeat.

But like the Tide, which in early January redeemed itself and its state by winning the 2018 College Football Playoff National championship, Huntsville, just two days later, erased its earlier loss by besting North Carolina and South Carolina in the frenzied competition to land a $1.6-billion Toyota-Mazda production plant, the season’s biggest prize so far.

“Welcome to sweet home Alabama,” crowed Gov. Kay Ivey, announcing tech-ready Huntsville, the state’s NASA-nurtured “Rocket City,” as Toyota-Mazda’s choice for the advanced manufacturing plant that is expected to create 4,000 jobs. Sharing a stage with Toyota President Akio Toyoda and Mazda CEO Masamichi Kogai, Ivey announced that the jobs will pay an average of $50,000 a year.

With production to start in 2021, the Huntsville plant will manufacture a new version of the Toyota Corolla, part of a thrust by Toyota to invest $10 billion in the US over the next five years. Mazda is expected to build crossover SUVs.

Noting that such opportunities present themselves “every two or three years at the most,” Alabama Commerce Secretary Greg Canfield boasted that “these are the kinds of projects that would win you a championship.” President Trump tweeted that the announcement was “good news” for the US economy. “Companies are coming back to the US in a very big way. Congratulations Alabama,” he wrote.

In unwinding some of the decisions that led to Huntsville’s selection by Toyota and Mazda, a handful of items emerge, some unreported:

In a statement in response to a Site Selection query, Toyota says the 2,400-acre (971-hectare) Huntsville parcel, within both the city limits and adjoining Limestone County, “provided excellent site geography and supporting infrastructure, quality workforce, logistical factors such as proximity to Toyota’s supply base, and the quality of life offered to our team members.”

Perhaps addressing suggestions of thinness along Alabama’s manufacturing bench, Toyota expressed confidence at being able to fulfill its workforce needs, asserting to Site Selection that Alabama’s automotive workforce, alone, numbers close to 60,000. The state agreed to sink millions of dollars into a worker training center.

All told, Alabama’s winning bid to Toyota-Mazda included about $700 million in state and local incentives. Packages offered by North Carolina and South Carolina both were believed to have exceeded Alabama’s, with North Carolina’s bid, according to a source involved in the talks, topping the widely reported figure of $1.5 billion. Officials of the South Carolina Department of Commerce declined to comment on any offer they might have presented. 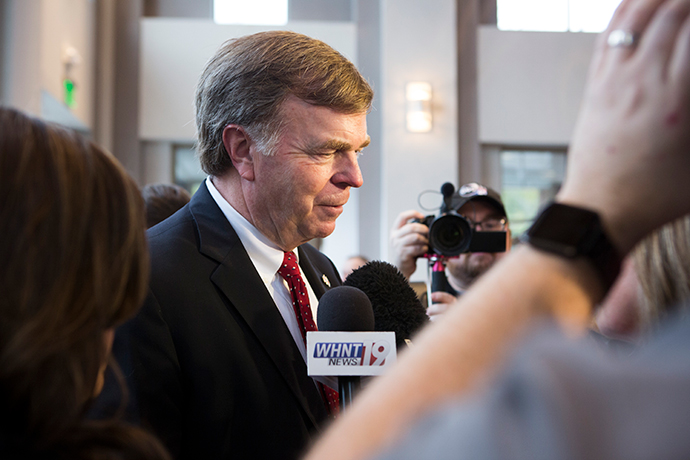 The state government accounted for just over half of Alabama’s package, with Montgomery ponying up nearly $380 million to help land Toyota-Mazda, according to Commerce Secretary Canfield. State inducements include a $210-million investment credit; a $96-million payroll credit; a $20-million capital reimbursement credit; a $40-million sales and property tax abatement; and $20 million for the worker training center.

Local incentives totaling $320 million, approved January 11th by the Huntsville City Council, include $81 million in “direct money” for land, construction of a railroad spur to the site and additional site preparation work. The bigger part of the local package will come primarily, say officials, from the costs of “moving up” related infrastructure projects and zeroing out projected taxes.

Learn From Your Losses

Mayor Battle, running on Huntsville’s high-tech successes, is mounting a Republican primary challenge to Gov. Ivey, who lamented in a speech last summer that, “y’all, we’ve got to pick up now and recruit some of these 21st century jobs.”

Was Gov. Ivey helpful in negotiations, given that a second Alabama site may have been in the mix? Battle’s response suggests a political culture capable of putting aside personalities to do business.

“They [the state] stuck with us through this process,” Battle says. “Sometimes in negotiations we’d say ‘No,’ and there were times they could have stepped in and pushed us to do more than what we thought the community could do. And they didn’t.

“It’s been a good partnership since Governor Ivey’s come in,” Battle offers. “We’ve announced Blue Origin [$200 million], we’ve announced Aerojet Rocketdyne [$27 million], we’ve now announced Toyota-Mazda [$1.6 billion]. She has confirmed the state incentives in each one of those cases when she did not have to.” 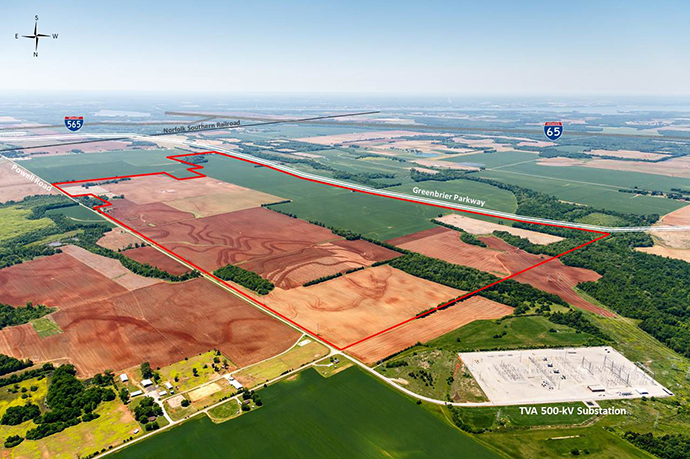 “If you don’t have a pre-certified site," says Huntsville Mayor Tommy Battle, "you can’t do it.”
Photo courtesy of TVA and Chamber of Commerce of Huntsville/Madison County

Major Alabama wins during Ivey’s short tenure, which began with her predecessor’s resignation last April, also include deals for a $200-million Leonardo DRS jet manufacturing facility in Tuskegee and a $220-million building products plant in Prattville being built by Ireland’s James Hardie Industries. During her State of the State speech January 9th, Ivey announced that Kimber Firearms will build a $38-million production facility in Troy (though she studiously avoided any mention of the state's thriving automotive sector, perhaps for fear of jinxing the last-minute talks).

Battle was campaigning for the first of his two terms as mayor when the city lost the Volkswagen race. Upon winning election, he made improving the parcel Volkswagen rejected a Huntsville priority.

“After-actions are more important than anything, whether you win or you lose,” Battle says. “We did after-actions after the Volkswagen loss. The lesson we learned is that we were making a lot of promises to Volkswagen, but we couldn’t guarantee those promises.”

Using extreme shorthand, a city official recalls how Huntsville responded by "using sewer lines as a tool of economic development” in a steady ground game to upgrade the site’s infrastructure and accessibility. Environmental clearances got done. Soil tests and permits, done and done. In June 2016, the work paid off and the Tennessee Valley Authority (TVA) certified 1,242 acres (503 hectares) as a shovel-ready megasite. Just 14 months later, Toyota and Mazda came knocking.

Noting Toyota-Mazda’s urge “to get to market” by 2021, Mayor Battle says flatly, “You’ve got to have a certified site to be competitive in this type of competition. This is a fast-track of a building and development. If you don’t have a pre-certified site, you can’t do it.”

When Akio Toyoda joined Ivey, Battle and Canfield at the announcement in Montgomery, the Toyota president related a story he suggested very few people knew. He said his initial impressions of America were formed in Alabama, which he visited as a Boy Scout in his youth.

“Thanks to the famous southern hospitality,” said Toyoda, “my first experience in America was a success and remains very special to me.” (In a Site Selection story about Alabama's longstanding welcome to Japanese FDI that was published two weeks prior to the Toyota-Mazda announcement, Canfield related a similar tale involving a visiting Japanese exec and fried green tomatoes.)

“We did after-actions after the Volkswagen loss. The lesson we learned is that we were making a lot of promises to Volkswagen, but we couldn’t guarantee those promises.”
— Huntsville Mayor Tommy Battle

“We have been working on relationships with Toyota for years,” he says, “and we knew that we had a track record with them. We knew that they were good corporate partners. We knew that during the 2009-2010 recession when lots of other companies were laying people off, they never laid anybody off. If they idled the line, they put their team members out and they did community service.

“I think the essence of any deal is it’s got to be win-win. Win for the company and win for the community. That’s the approach we’ve always taken. Whether its been Aerojet Rocketdyne, whether it’s been Blue Origin, Remington, Polaris or GE Aviation.

“We’re in an enviable position,” says Battle. “In this case, we chose Toyota.”