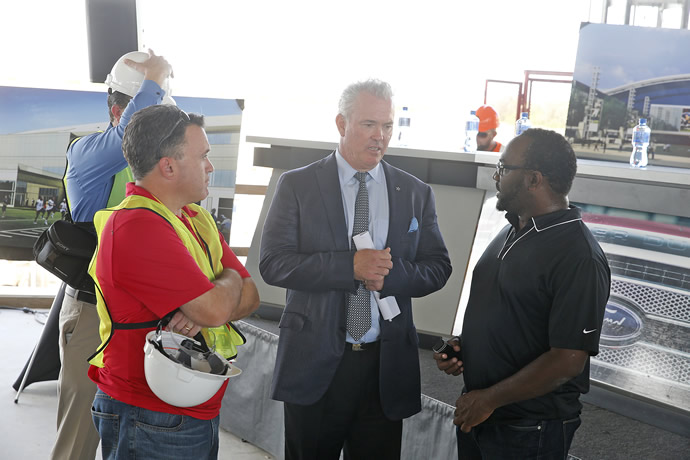 If you know anything about Dallas Cowboys owner Jerry Jones, you know that he doesn’t like to do things in a small way.

From hiring the brash, outspoken Jimmy Johnson to be his head coach and replace the legendary Tom Landry back in 1989, to building the National Football League’s biggest and most ambitious stadium 20 years later, Jones has put his own unique stamp on America’s Team and the state it calls home. 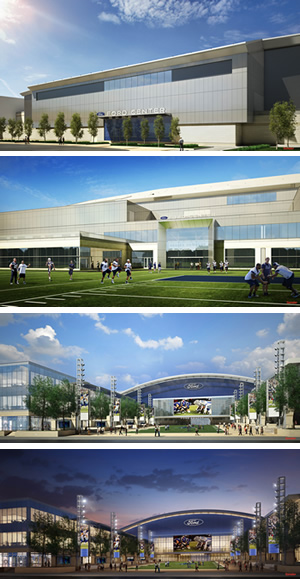 The Dallas Cowboys World Headquarters is shown in various renderings. Upon completion next summer, this complex will host not only the Cowboys’ organization, but also the world-famous Dallas Cowboys Cheerleaders and a 12,000-seat indoor football stadium that will be used for local high school football games in Frisco.
Images courtesy of the Dallas Cowboys

That’s why the latest venture of Jones — relocating the Cowboys’ corporate headquarters and training complex to Frisco just north of Dallas — seems like the perfect marriage.

Frisco, like Jones, doesn’t do much that can be described as small.

In the span of just one mile, Frisco has $5.4 billion in projects under development. The Ford Center at The Star in Frisco — future home of the Dallas Cowboys World Headquarters — is the $1-billion, 91-acre (37-hectare) mixed-use project that anchors this mile. Upon completion next summer, The Star will feature a 12,000-seat indoor stadium that will host high school football games for local schools, two hotels with 480 rooms, and an additional 66-acre (27-hectare), mixed-use entertainment district capable of supporting 1.7 million sq. ft. (157,930 sq. m.) of commercial development.

Also under development along the $5-billion mile are the $1.7-billion Frisco Station mixed-use project; the $700-million Gate mixed-use and office complex; and the $2-billion Wade Park community that will include a Whole Foods Market, two hotels and 2.3 million sq. ft. (213,670 sq. m.) of office space.

From Warren Parkway to Lebanon Road along the Dallas North Tollway, these projects are rapidly changing the landscape of one of America’s fastest-growing cities.

Located in Denton and Collin counties about 25 minutes north of Dallas and the Dallas/Fort Worth International Airport, Frisco has grown its population by 307 percent since 2000. Today, America’s 12th-fastest-growing city has more than 150,000 residents and an annual median household income of $109,956, making it one of the wealthiest communities in Texas.

Another Kind of Football

Growth like that attracts corporations, and increasingly it is attracting companies aligned with sports to Frisco. Already home to Toyota Stadium and FC Dallas of Major League Soccer, Frisco scored the equivalent of a hat trick on September 29 when the city won approval to become the new home of the National Soccer Hall of Fame Museum.

The Frisco City Council approved a measure to fund $39 million in improvements to Toyota Stadium to house the museum at the south end of the stadium complex. The Hall of Fame has been without a home since 2010 when it officially closed down in Oneonta, N.Y.

The relocation plans include construction of an 80,000-sq.-ft. (7,432-sq.-m.) facility to host the National Soccer Hall of Fame and special events. In addition, FC Dallas and the City of Frisco plan to look into attracting a new hotel adjacent to the stadium. 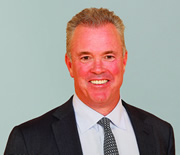 Stephen Jones was a four-year letterman at linebacker and special teams standout at the University of Arkansas before joining his father, Jerry Jones, in the front office of the Dallas Cowboys.
Photo courtesy of the Dallas Cowboys
“When the Frisco opportunity came up, it was really a no-brainer. They were very progressive. What they are doing as a city is very aggressive and best in class. They are one of the fastest-growing cities in the US, and this is a blue-chip real estate play to boot.”
– Stephen Jones, COO, Dallas Cowboys

Frisco in recent years has become a mecca for professional sports facilities and various youth sports organizations. The minor league baseball Frisco RoughRiders play their home games at Dr. Pepper Ballpark in Frisco, while the Dallas Stars of the National Hockey League and the Texas Legends of the NBA’s Developmental League play at nearby Dr. Pepper Arena. The Football Championship Subdivision plays its annual NCAA Championship Game each year at Toyota Stadium as well.

With other sports venues such as Performance Indoor Training, FieldhouseUSA and iFly Indoor Skydiving, Frisco was recently named the “Best Place to Raise an Athlete” by Men’s Journal.

The crown jewel of Frisco’s sports-related economic development efforts, though, will be the $252-million Dallas Cowboys World Headquarters. The Cowboys celebrated the halfway point of construction on The Ford Center at The Star on July 25. Upon completion around mid-2016, the headquarters will span 435,000 sq. ft. (40,412 sq. m.) in a six-story building overlooking an outdoor practice field. 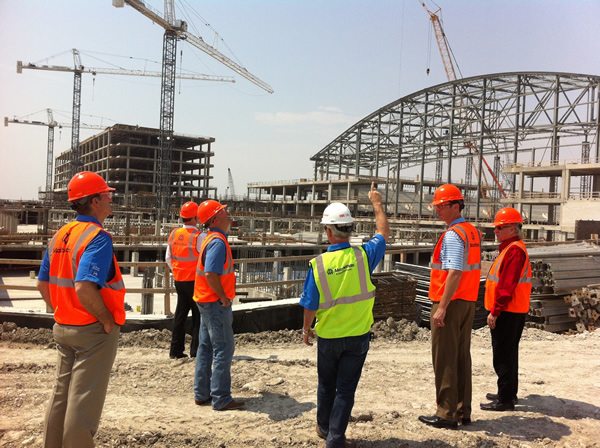 Visitors from the City of Frisco and Site Selection Magazine get a tour of the construction site of the new Dallas Cowboys World Headquarters in Frisco, Texas.
Photo by Ron Starner

“We’re thrilled with the progress of the project so far,” said Cowboys Chief Operating Officer Stephen Jones, who also serves as executive vice president and director of player personnel for the team. “The trusses and the concrete represent the strength of our partnership with the City of Frisco and the Frisco Independent School District. This facility is going to bring together high school students and the Dallas Cowboys in a way that has never been done before, and this development will benefit this community, on so many levels, for decades to come.”

Jones, the son of team owner Jerry Jones, was a four-year letterman at linebacker and special teams standout at the University of Arkansas before launching his career in business. After his father bought the Cowboys, Stephen joined the team as vice president.

Today, he presides over all aspects of the day-to-day management of the Cowboys, including the ongoing headquarters construction project in Frisco. 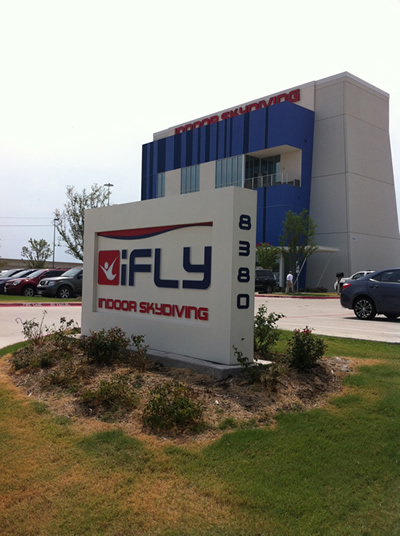 The iFly Indoor Skydiving center is just one of many sports venues in Frisco, a feature that factored into Men’s Journal naming the city the Best Place to Raise an Athlete.
Photo by Ron Starner

“First of all, we were not aggressively pursuing a new home,” Jones says in an interview with Site Selection. “We had put our focus into building AT&T Stadium in Arlington. We had decided not to include our new practice facility in the new stadium. It was a conscious decision. But we did start to get interest from people looking for us to make a move out of Valley Ranch in Irving. We started to put some serious thought into it.”

That’s when the City of Frisco entered the discussion, he notes. “When the Frisco opportunity came up, it was really a no-brainer,” Jones says. “They were very progressive. What they are doing as a city is very aggressive and best in class. They are one of the fastest-growing cities in the US, and this is a blue-chip real estate play to boot.”

The city passed a $90-million bond referendum in July 2014 to pay for a portion of the $115 million that Frisco is pouring into the development.

“The partnership with the Frisco Independent School District ensured that we would be able to touch our grassroots right here in Texas,” Jones adds. “That’s where the future stars of the NFL are playing today. Being able to be around the young football players in Frisco, being able to rub shoulders with them, that is a very positive thing for the Cowboys.”

While Arlington and Irving both expressed interest in being the long-term home of the Cowboys, Jones says, “At the end of the day, it was about what Frisco could bring to the table. I give them a lot of credit.”

Jones admits that local incentives helped seal the deal. “They were very important,” he notes. “Frisco was big into that and they believe in it. They have had a lot of success with incentives. What we received were the typical incentives associated with a corporation moving into Frisco.”

“Between George and Jim and the mayor, they are all entrepreneurs and they are very progressive,” says Jones. “They want to see the city grow and prosper, and so do we.”