A report from the United Nations documents where tourists come from, and where they’re going. 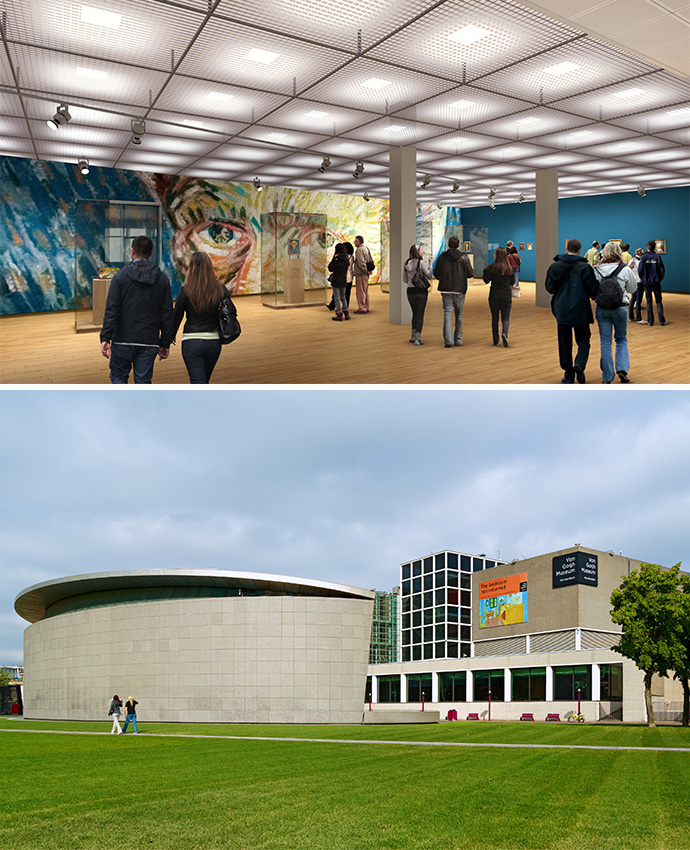 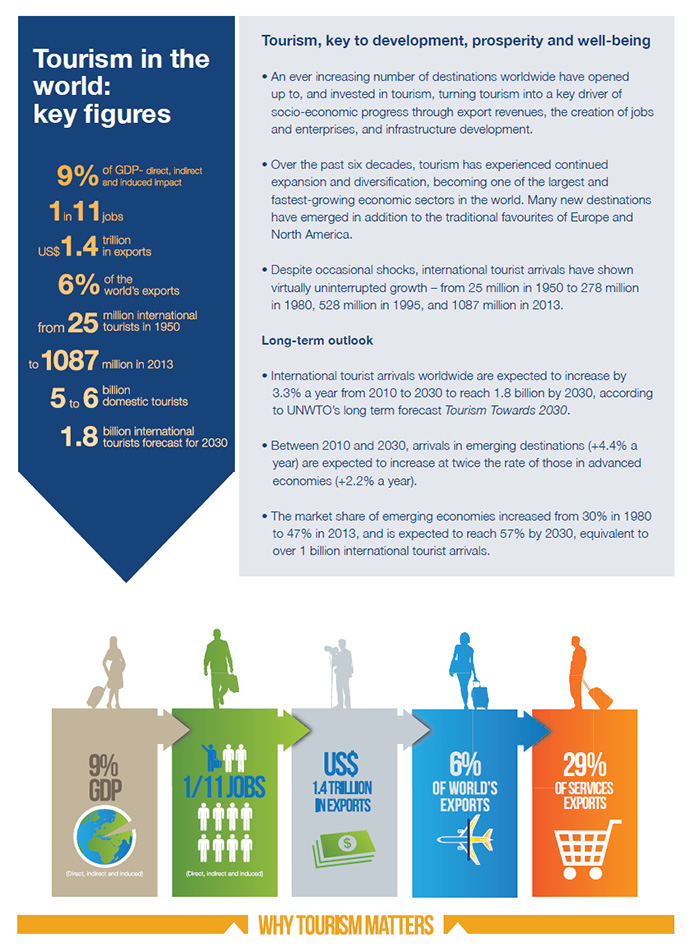 This UNWTO infographic shows what tourism means to the world economy.
Source for all graphs and charts: World Tourism Organization (UNWTO)

It's as true in the tourism world as it is in the world of global FDI: The Chinese have money to invest, and they're going places to spend it.

That's one of several compelling findings in the 2014 world tourism report from the United Nations World Tourism Organization (UNWTO). The report, which analyzes tourism data through 2013 and forecasts trends to 2030, also found that most tourists take their trips within their own world region. Which may explain why Universal Studios just announced its plans to open a $3.2-billion theme park in Beijing.

"Destinations worldwide received some 317 million international tourists (overnight visitors) between January and April 2014, 14 million more than in the same period of 2013," said the UNWTO this summer. "Over 460 million tourists were expected to travel abroad during the four months from May to August, which account on average for 41 percent of all international tourist arrivals registered in one year." The highest growth in international flight reservation bookings between May and August came from Asian source markets, followed by the Americas (up by 8 percent).

Below we present excerpts, charts and graphs from the UNWTO report, which may be found in its entirety at www2.unwto.org.

An ever-increasing number of destinations worldwide have opened up to, and invested in tourism, turning tourism into a key driver of socio-economic progress through export revenues, the creation of jobs and enterprises, and infrastructure development. 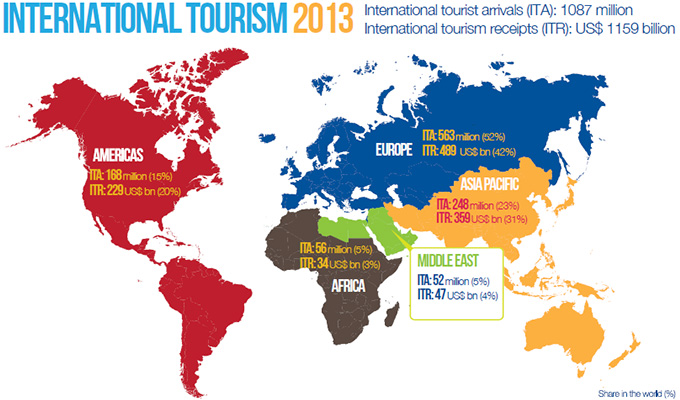 Slightly over half of all travelers arrived at their destination by air (53 percent) in 2013, while the remainder traveled by by road (40 percent), rail (2 percent) or over water (5 percent).

In 2013, travel for holidays, recreation and other forms of leisure accounted for just over half of all international tourist arrivals (52 percent, or 568 million). Some 14 percent of international tourists reported traveling for business and professional purposes and another 27 percent traveled for other reasons, such as visiting friends and relatives (VFR), religious reasons and pilgrimages, health treatment, etc. 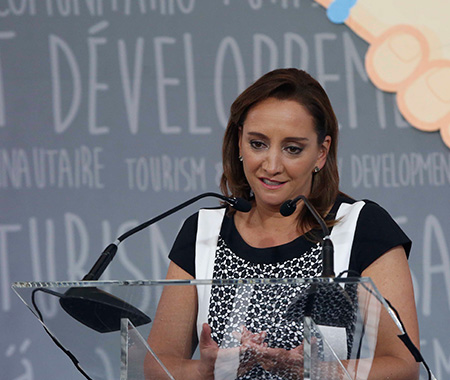 In 2013, international tourism receipts in destinations around the world grew 5 percent in real terms (taking into account exchange rate fluctuations and inflation) to reach US$1.159 trillion. In absolute terms, receipts increased by US$81 billion. Europe, which accounts for 42 percent of all international tourism receipts, saw the largest growth in 2013: up US$35 billion to US$489 billion, boosted partly by a stronger euro. Destinations in Asia and the Pacific (accounting for 31 percent of worldwide receipts) increased earnings by US$30 billion to US$359 billion. In the Americas (20-percent share), receipts increased by US$16 billion to US$229 billion.

That's where the money's going. But where's it coming from?

"In 2013, China, which leaped to first place in the ranking by international tourism expenditure in 2012, extended its lead further, increasing expenditure in 2013 by a massive US$27 billion to a record US$129 billion," says the UNWTO report. "Boosted by rising disposable incomes, fewer restrictions on foreign travel and an appreciating currency, Chinese tourism spending abroad has increased almost tenfold in the 13 years since 2000, when it ranked only 7th. In 2013 the gap in expenditure between China and second and third largest spenders the United States and Germany widened to over US$42 billion."

International tourism (travel and passenger transport) accounts for 29 percent of the world's exports of services and 6 percent of overall exports of goods and services. As a worldwide export category, tourism ranks fifth after fuels, chemicals, food and automotive products, while ranking first in many developing countries. 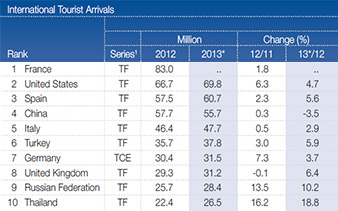 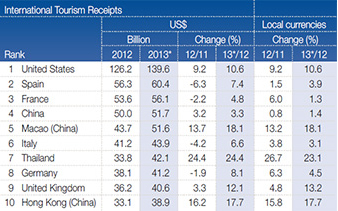 In his World Tourism Day message in late September, UN Secretary-General Ban Ki-moon said, "Engaging local populations in tourism development builds stronger and more resilient communities. Tourism helps people to develop a variety of skills. As a service sector with cross-cutting impact on agriculture, construction or handicrafts, tourism creates millions of jobs and business opportunities. Its capacity to lift people from poverty, promote gender empowerment and help protect the environment has made it a vital tool for achieving positive change in communities across the world." 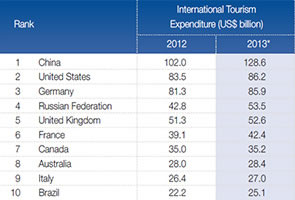 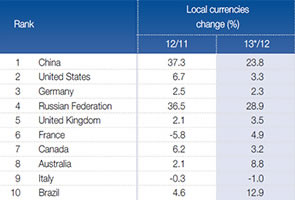 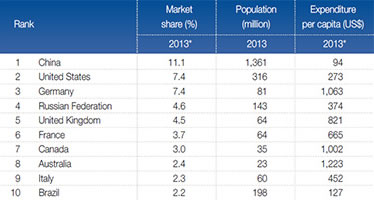 Island for Sale. Run and Get It, Quick. 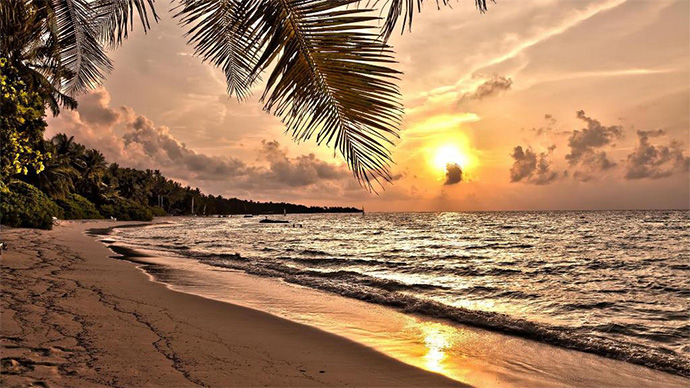 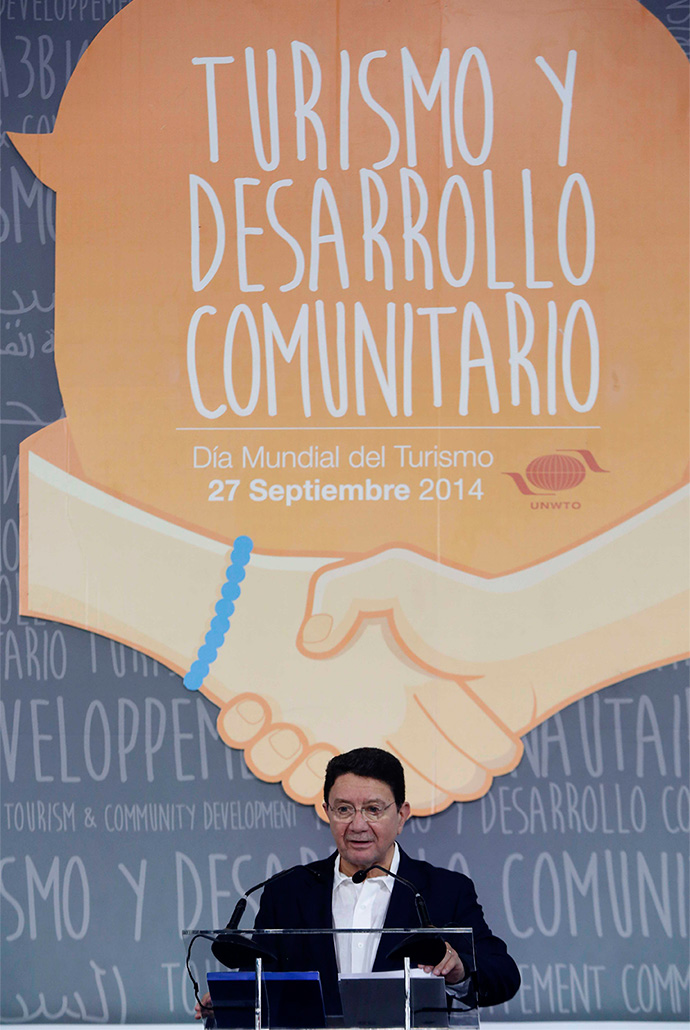 Speaking at World Tourism Day in Guadalajara, Mexico, in September 2014, UNWTO Secretary-General Taleb Rifai said, "There can be no real tourism development if it damages the values and culture of host communities, or if the socio-economic benefits generated by tourism do not trickle down to the community level."

Even amid political turmoil, the Maldives received just over 1 million tourists in 2013 and more than 30 per cent of them were Chinese. Tourism accounts for more than a quarter of the $2.3 billion economy in the Maldives, a nation of 1,192 tiny coral islands scattered some 850 kilometers (530 miles) across the equator.

Orivaru is a tropical island paradise in the northern Maldives covering an area of 14 hectares (34.6 acres) and is one of 71 islands forming the Noonu Atoll situated approximately 100 miles north of the Maldivian capital Male. The Maldivian registered owners are seeking offers around $14 million for their interest in the island "and would-be developers literally have a blank canvas to create a luxury resort," says a release from Debutesq Group, which is marketing the site.

"The island is held on a long leasehold from the Maldivian government although these are frequently renegotiated and extended," said the release. "Debutesq Group director Alan O'Connor, who is marketing the site, says 'Being just 45 minutes by seaplane from Male International Airport, this could no doubt become another very successful tourist destination. A Russian investor recently purchased an island in the northern atolls for $65 million so there is definitely a market out there."

Whether the market keeps its head above water is a literal concern.