A new transatlantic agreement would be a giant step forward for two longtime trading partners. 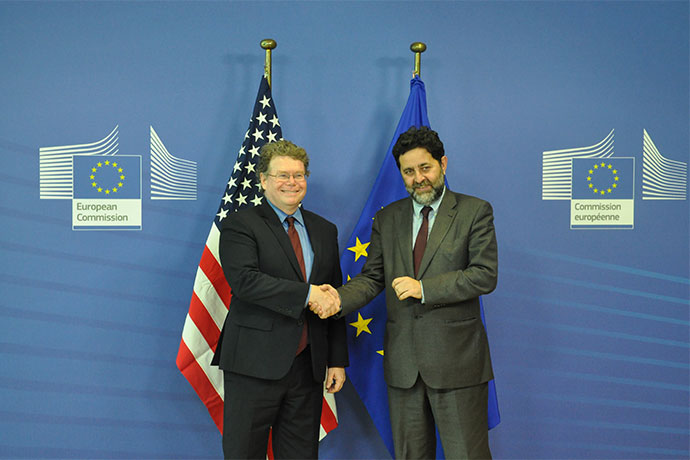 Dan Mullaney (l.), chief US Negotiator for the Transatlantic Trade and Investment Partnership (TTIP), and Ignacio Garcia Bercero, chief EU Negotiator for the TTIP, started the 6th round of TTIP in Brussels in June 2013.
Photo Credit: Courtesy of European Commission
By Max Bouchet and Patty Rasmussen

This commentary is the first installment of a three-part series.

Once completed, the Transatlantic Trade and Investment Partnership (TTIP) will be the most ambitious free trade agreement in history, a proverbial game-changer desperately needed at a critical time for the United States and the European Union. And it needs to happen soon.

At a time of continued fragility in the EU economy, and with the US pivoting towards Asia, the treaty would strengthen ties between two crucial allies, further uniting and reinvigorating their economies. Expectations are high that an agreement would deliver a much-needed economic jolt to the EU through wide-ranging reciprocal market opening, and greatly enhance the economic revival of the US economy.

It needs to happen for practical reasons, too. Speaking at a 2014 event in Atlanta co-sponsored by the Trans-Atlantic Business Council, Emory University’s School of Law, and the Metro Atlanta, German American and Swedish American Chambers of Commerce, UPS Chief Financial Officer Kurt Kuehn described mind-numbing differences in standards, regulations and documentation. He says the single biggest cause of delays in moving products between the US and Europe is incomplete customs invoices. All involved agree that something must be done to ease the flow of goods and decrease the cost of transatlantic business — see the problem, fix the problem — but it’s easier said than done.

“If the two most mature economies in the world can’t solve their differences,” asked Kuehn, “is there hope for them to maintain their velocity and competitiveness?”

The Devil’s in the Details

June 2013 – negotiations for the TTIP are launched between the White House and the European Commission. Both sides commit to expanding bilateral trade and investment by creating a more streamlined system and removing as many obstacles as possible. The proposed agreement would reduce duties to near zero and get rid of needless delays or redundant regulations by lowering behind-the-border, non-tariff barriers. 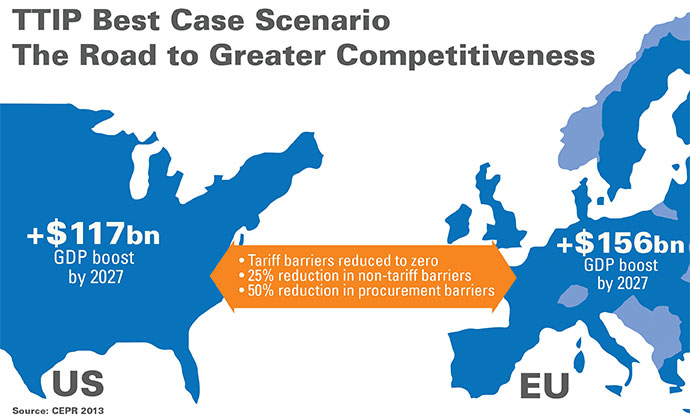 Though the two economies adhere to similarly high levels of safety, they use different standards in goods manufacturing, often making a European product unfit for the US market and vice versa. The devil’s in the details, and the list of minor non-tariff barriers is extensive. To meet the disparate regulations of their exporting markets, companies must invest in costly and often trivial modifications.

Dr. Reinhold Festge, president of the German Engineering Association VDMA, highlights the absurdity of dual standards in the automotive sector.

“A few weeks ago, I met with a colleague who runs a machine tool company in my home country of Germany,” he wrote in an August 2014 opinion piece for EurActiv.com. “It's a mid-sized company with 600 employees. His company manufactures machines that automatically form metal parts that are used, for example, in the production of car airbags.

“There is also demand for these machines in the US, but my colleague cannot just sell his machine to the States the way it is. In the EU, the electric cable that closes the machine’s circuit is blue colored, as standard, but in the US, the color of this specific cable needs to be white.

“I personally doubt that one method is safer than the other, but the fact is my colleague needs to change the cables in his machines. Otherwise, he is not allowed to ship them over the Atlantic Ocean.”

A chapter in the TTIP addresses these sorts of barriers affecting mechanical engineering. Modifications like changing the wire color mean it costs European machinery companies 5 percent to 20 percent more to make machines for American customers, wrote Festge, noting that machinery deliveries represented almost 13 percent of total EU exports to the US in 2012 — more than the automotive industry — and that more than 3 million Europeans work in mechanical engineering, often in small- to medium-sized enterprises (SMEs).

Those are exactly the types of firms that comprise the German Mittelstand, the cohort of mostly family-owned SMEs that is increasing its strategic focus on the US, says the annual business survey of German companies in the US released early this month by the German American Chambers of Commerce (GACC), the Representative of German Industry & Trade, and Roland Berger Strategy Consultants.

In 2014, 90 percent of German subsidiaries responding to the survey reported better sales volumes, and 98 percent expect revenue growth in 2015. But trade issues persist and are gaining in importance: Sixty-nine percent of German companies see TTIP as an important measure, in comparison to just over 50 percent last year. Firms are hoping to see an elimination of tariffs and better regulatory cooperation. 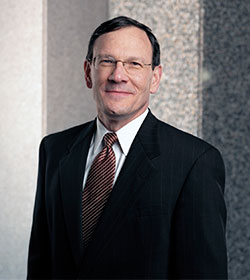 "If the two most mature economies in the world can’t solve their differences, is there hope for them to maintain their velocity and competitiveness?"
—Kurt Kuehn, CFO of UPS

Bigger Than Both of Us

As reported by Site Selection from the SelectUSA summit in 2013, Secretary of State John Kerry said that the TTIP would “dramatically expand our market reach” and “strengthen rules-based trading so that we engage in a race to the top, not a race to the bottom.”

Experts suggest that most benefits from the TTIP would be realized through mutual recognition of procedures and standards compatibility. Though estimates vary owing to different methodologies, the agreement should facilitate a $236-billion jump in goods and service exports from the EU to the US, while US exports to the EU would increase by $200 billion. Better still, a comprehensive TTIP agreement could create as many as 1.1 million new jobs in America.

By 2027 the pact would stimulate GDP growth of around a half a percent for both the US and the EU, an economic shot of adrenaline many say we can’t afford to miss.

Seven rounds of negotiations have been completed thus far, the most recent wrapping up in October. Both sides are aiming for a final agreement by the end of 2015, but, as is often the case, political forces threaten the deal’s progress.

Once the negotiation is finalized, the road to implementation will be bumpy. The treaty must be approved by the European Parliament, made up of elected representatives from each of the EU’s 28 member nations. After the May 2014 election, the makeup of the parliament took a definite protectionist turn.

In the US, President Obama has asked Congress to adopt Trade Promotion Authority (TPA) legislation, also called “fast-track,” giving the President temporary authority to negotiate international agreements that Congress can approve or disapprove, but cannot change. But Democrats such as Senate Majority Leader Harry Reid have expressed opposition. Republicans want it, but may sacrifice the legislation on the altar of politics in order to thwart the president’s legacy.

John Murphy, the US Chamber of Commerce’s senior vice president for international policy, said the effort to open new markets starts with the TTIP. “Refusing to move forward only guarantees that foreign barriers against American goods stay in place,” Murphy told Politico.com early this year.

Big companies want it. Small companies want it, and need it even more. Much can be gained by the passage of the TTIP, but it will not happen without compromise at the negotiating table, and amongst our elected leaders. Site Selection believes the time is now for a genuine push toward a freer transatlantic market, and we encourage our leaders to cut through partisan politics to affect real change.

We like to say we’re all about free enterprise — let’s go prove it.

What about you? Tell us how your business could benefit from TTIP, and we will select a few of your testimonies to appear in the third part of this series. Send your thoughts (300 words or less please) to Patty Rasmussen at patty.rasmussen@siteselection.com. Please include your name, company and email address. Your name will not appear without your permission.