New statistics from the International Federation of Robotics illustrate converging patterns of data, efficiency and demand. 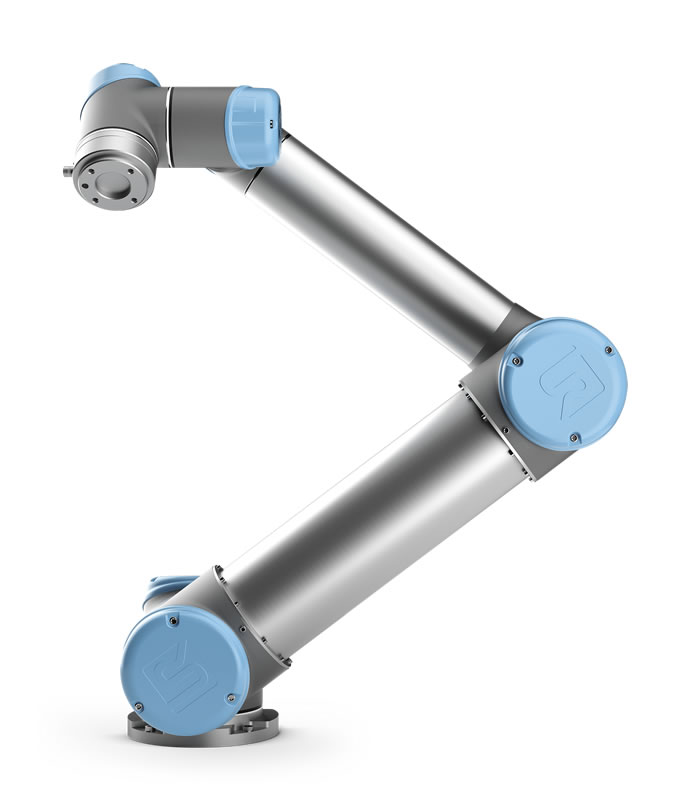 "Greetings. Are you ready to collaborate?" The UR5 robotic arm from Denmark's Universal Robots has proved useful to a variety of companies' production processes.
Photo courtesy of Universal Robots
by Adam Bruns

Think Pixar's robotic lamp, as it turns to face you before the movie starts. Cute, right? Sinister? Never. At least not to the International Federation of Robotics (IFR), which this week released 2015 World Robot Statistics report.

By 2018, says the report, global sales of industrial robots will on average grow by 15 percent year on year, and the number of units sold will double to around 400,000 units.

"The main driver of this development is the global competition of industrial production. The automation witnessed by the automotive sector and the electrical/electronics industry comes out top here with a market share of 64 percent," says IFR President Arturo Baroncelli. 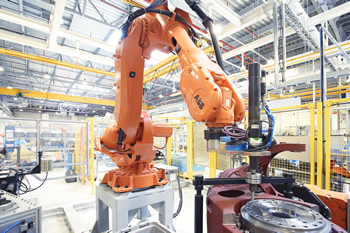 A robot assembles robots: ABB's IRB 6640 is used to assemble different types of modules in a robotized assembly cell at ABB's Pudong robotics factory in Shanghai.
Photo courtesy of ABB

"A new generation of robots is a strong echo of various demands — the 'Made in China 2025' plan, US re-industrialization, Japan's rejuvenation strategy and the EU's Industrial 4.0 all symbolize the new age of equipment's transformation and a changing production mode," said Dr. Daokui Qu, CEO of SIASUN Robot & Automation. "The new robot generation with its powerful adaptability works in manufacturing operations by using its intelligence and sensor technology. In addition to the traditional industries, robots enter into many other fields of human society, such as medical rehabilitation or family services."

Cobots are the trend. They represent a new generation of collaborative industrial and service robots that have broken out of their cells and are ready to partner with sensors and even humans as part of the ecosystem known as the Internet of Things (IoT).

"Today it is clear that a new generation of collaborative robots is stretching the boundaries of robotic automation by redefining the types of industrial processes which can be automated," said Per Vegard Nerseth, group senior vice president and head of Business Unit Robotics Discrete Automation & Motions Division for ABB Switzerland. "This will create yet more demand for our rapidly growing industry, and we at ABB are proud to have contributed to this with the recent introduction of the world's first truly collaborative robot, 'YuMi.'

"Human-robot collaboration also signifies simplification, as it ushers in a new breed of robots that can easily be integrated into real-world manufacturing settings in facilities of all shapes and sizes," he said. "Gone are the barriers and cages that traditionally separated humans and robots — in their place come robots which are easy to deploy, install and can be programmed intuitively, by anyone. Such robots are set to become an essential part of the integrated ecosystem that we have come to call the Internet of Things, Services and People." 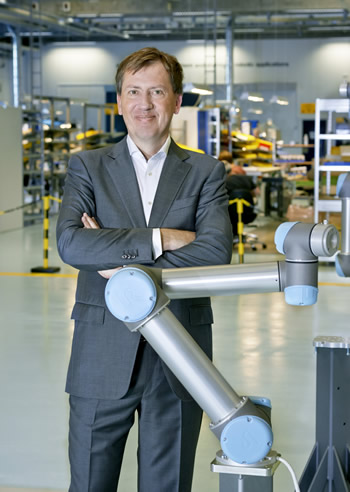 "Large corporations as well as small and medium-sized companies are looking for new ways to optimize production processes in order to compete on a global scale," says Enrico Krog Iversen, CEO of Denmark's Universal Robots.
Photo courtesy of Universal Robots

"The range of automation solutions addressing a larger span of manufacturers has become wider," said Enrico Krog Iversen, CEO of Denmark's Universal Robots. "As a consequence, the worldwide annual sales of industrial robots rose by 29 percent in 2014. The world's first collaborative robots entered the market in 2009. The new generation nicknamed cobots created a paradigm shift within the manufacturing industry — large corporations as well as small and medium-sized companies are looking for new ways to optimize production processes in order to compete on a global scale ... The cobots' ease-of-use, flexible deployment, human-robot-collaboration, space saving qualities, and their fast payback makes this new kind of robot attractive. The full potential of the global market of cobots is very far from being realized yet — we therefore expect increased demand in the next few years.

"In all this, R&D plays a key role," said Bernard Carera, group division manager of Switzerland-based Staubli Robotics. "As robots constantly open up new fields of application, demand for suitable solutions is also on the increase. Stäubli has invested much time and effort into developing special robots for diverse working conditions: strict hygiene criteria in the food industry, cleanroom standards in the semiconductor industry, medical and pharmaceutical sector as well as the needs in electronics production where electrostatic build-up must be eliminated." 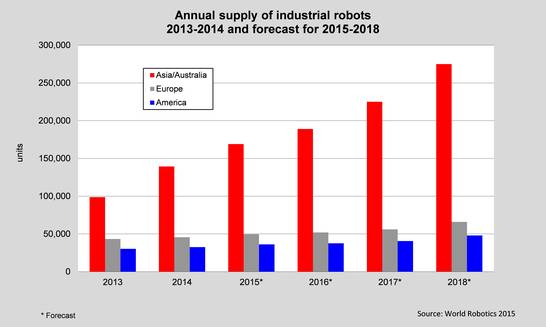 "The number of industrial robots sold increased by 56 percent alone last year in comparison to 2013," says the report, calling China both the largest and fastest growing robotics market in the world. "The potential remains enormous despite the recent economic downturn. After all, Chinese production industries currently have a robotic density of just 36 units per 10,000 employees."

By comparison, front-runner South Korea deploys 478 industrial robots per 10,000 employees, followed by Japan (315 units) and Germany (292 units). It is estimated that more than one-in-three of the global supply of industrial robots will be installed in the Republic of China in 2018.

"For the second year in a row, China is the world's biggest industrial robots market," said Xiaogang Song, executive vice president and secretary of the General China Robotics Industry Alliance (CRIA). "In 2014, sales volume reached about 57,000 units, which amounted to a one-fourth of the total global sales. From 2009-2014, sales of industrial robots increased by an annual average of 59 percent."

It is estimated that more than one-in-three of the global supply of industrial robots will be installed in the Republic of China in 2018.

But as more and more industry sectors use robots, more and more domestic Chinese robotics firms are popping up. Even as foreign robotics firms expand or build new facilities there, domestic firms will be right alongside, as the growth rate of their sales is projected to be over 40 percent, backed by supportive national and local government policies.

The pairing of industrial robots and sensors is on display at GM's engine plant in Tonawanda, N.Y
Photos by author

"The current robotics market in China is still dominated by foreign robots from the top four manufacturers ABB, KUKA, Yaskawa and Fanuc," said Minjia He, chairman of the board at GSK CNC Equipment. "With technological progress, the production capacity for Chinese industrial robots increasingly improves — transformation and upgrading of the traditional industry has become top priority. Cloud computing, big data and the Internet are important transformation factors, with robots playing a key role for intelligent future manufacturing.

"In this development robots improve quality and quantity of the products and increase the production efficiency," he continued. "They also significantly reduce production cost. These benefits are vital for the core competitiveness of the manufacturing industry in China." 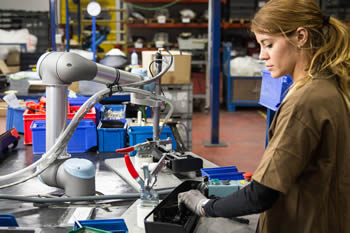 Spain's Shad, a European leader of accessories for motorcycles, incorporated their first UR5 from Universal Robots in their Mollet de Valles facility, located in the Catalonia region.

Production industries in the United States deploy just 164 industrial robots per 10,000 employees right now, says the IFR, but reshoring may be having an effect. In 2014 the number of installed robots increased by 11 percent to around 26,000 units — making it third in the world.

In Germany, the sales figures increased by around 10 percent in 2014 to about 20,100 units — to date the largest number of sales registered within twelve months. "Despite the already very high robotic density existing there, the world' s fifth largest robotics market remains on a path of expansion — driven primarily by the automotive industry," says the report.

Naoki Urai, executive vice president and member of the board at DAIHEN Corp. and president and CEO, OTC, for DAIHEN Europe, has seen his company increase sales in its home country China by 20 percent, based on automotive business. But he's looking abroad. Next to China, he said, "the European and US market has come to the forefront of DAIHEN's top management. It is already in progress to increase the activities in both markets significantly."

Global investments made by the automotive industry in industrial robots have increased significantly since 2010. 2014 was a new record year with about 100,000 newly installed robots — up 43 percent compared to the previous year. 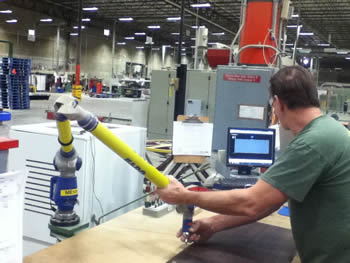 A robotic arm made by Florida-based FARO Technologies helps a quality assurance technician capture the precise dimensions of a ready-to-assemble furniture component at Sauder Woodworking in Archbold, Ohio.
Photo by author

"A large proportion of robotics technology in 2014 was purchased by suppliers of electronic components to the automotive industry," said the report. "These include battery manufacturers and car IT enterprises."

In 2014 the electrical/electronics sector likewise posted a new record — sales increased by 34 percent compared to the previous year. The strong demand for industrial robots in the production of consumer electronics, communication equipment as well as computer and medical technology adds up to a total global market share of 21 percent.

"We have seen impressive growth rates in the last 20 years," said Mathias Wiklund, COO of Comau Robotics. "Sales of industrial robots have increased from 65,000 in 1995 to 229,000 in 2014. That amounts to more than a tripling. And this trend will continue, albeit differently: Manufacturing will change in general, different machines will work differently with human beings. We will see more robots coming into our life and manufacturing."

As Wiklund's comment hints, the "life" side of robotics is growing as fast as the work side. IFR issued a separate report stating that by 2018, global sales of privately used service robots will increase to around 35 million units. 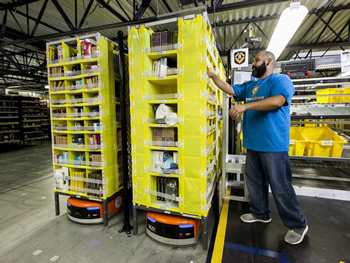 "At 25 million units, domestic robots (vacuum cleaners, lawn mowers, window cleaners etc.) will be right at the top of the future shopping lists of private customers," said the IFR, with total estimated sales worth $12 billion from this year through 2018. "Added to that there are around 9 million entertainment- and leisure robots with an estimated volume of $7.6 billion. At the same time, service robots for professional use boom. The biggest markets in this segment are defense, agriculture and logistics. It is anticipated that by 2018 a total of over 150,000 units will be sold at a total value of around $20 billion."

Including the headline-grabbing Kiva robots put to use in Amazon warehouses, around 2,700 logistics robot systems were installed in 2014 – representing a rate of growth of 27 percent compared to 2013. The manufacturing sector alone purchased 2,100 automatic guided vehicles.

All told, the wave of digital transformation and automation will continue to drive what IFR calls the triumphant march of industrial robots onwards up to 2018.

"The market volume available to industrial robots is enormous," said Baroncelli. "Including supporting services we estimate the global market value to be US$32 billion for 2014." 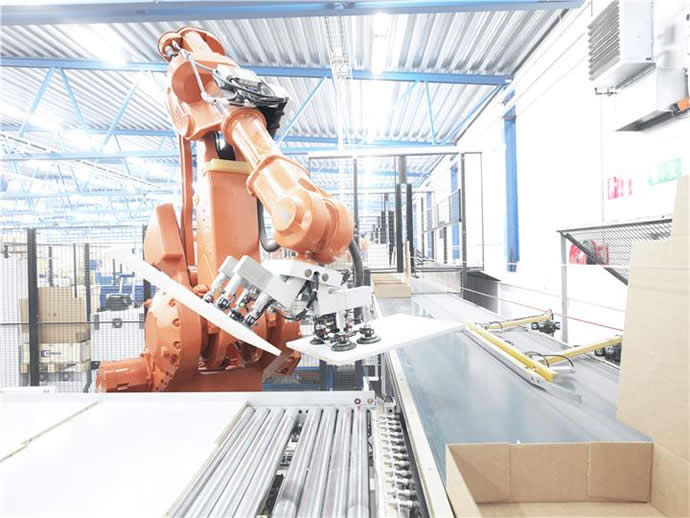 ABB, with 175,000 robots installed around the world, has a broad offering of robot-based automated packaging solutions, including specialized robots for picking, packing and palletizing.
Photo courtesy of ABB