The Robots Are Coming 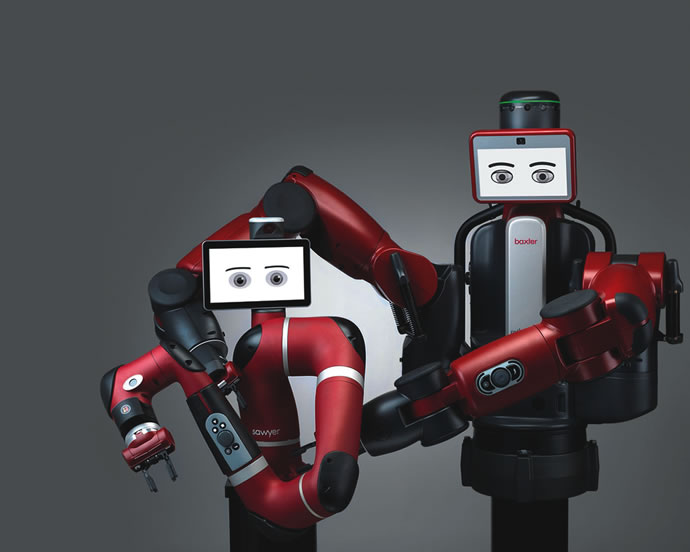 “Danger, Will Robinson” may be the most famous three words ever spoken by a robot on television. But the fake peril of 1960s science-fiction show Lost in Space pales in comparison to the sense of loss about to be felt across the global economy due to job displacement caused by software and automation.

That was the bottom-line conclusion shared by Martin Ford at the second session of the World Forum for FDI in San Diego on April 5. A software developer, Silicon Valley entrepreneur and author of the New York Times bestselling book Rise of the Robots: Technology and the Threat of a Jobless Future, Ford told some 300 conference attendees that “we could be on the leading edge of a massive disruptive wave. It could end up putting a tremendous amount of stress on society and the global economy. Robots and software could ultimately replace many workers.”

Despite the many skeptics and scoffers who still balk at the notion of a largely automated global workforce, Ford said, “I have talked to many technical people working deeply on artificial intelligence. They believe we are headed toward a world where we are deeply dependent on robots.” 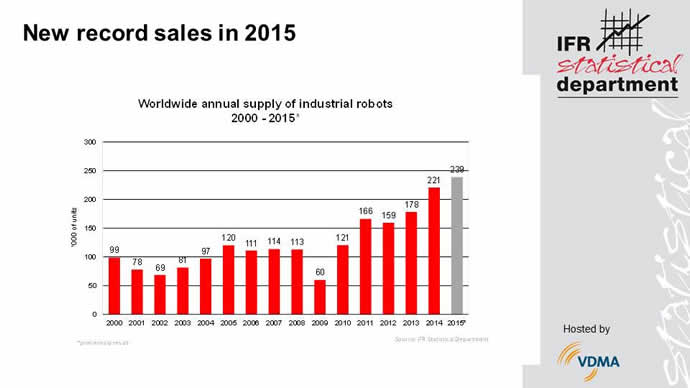 The proliferation of robotics is an unmistakable trend.
Graph courtesy of International Federation of Robotics (IFR)

Before you’re tempted to mimic the fictional Dr. Smith of Lost in Space and utter his most famous and oft-repeated line – “We’re doomed!” – Ford and a panel of experts were quick to point out that not all of the effects of automation in the workplace of the future are negative.

As the workplace becomes more automated, Ford explained, it also is becoming more efficient. “In 1998, 194 billion hours of labor were performed,” he noted. “In 2013, the total amount of labor demanded by business was exactly the same — 194 billion hours. That is true because, for the first time, machines and computers are taking on cognitive tasks. This is increasingly about replacing brain power. It is really scaling across the whole economy, and it will invade virtually every industry everywhere. Machines are now replacing human workers in many jobs and industries.” 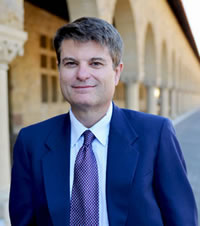 Automation is also giving the US and other Western nations a competitive advantage, Ford added.

“If you look at industrial robot density, China is dead last. They are still way behind everyone else,” he said. “This is the biggest thing happening in the developing world right now. They are worried about losing reshoring projects to the US, and they are worried about their jobs going to even lower-wage countries. As a result, they are investing heavily in robotics.”

The latest numbers from the International Federation of Robotics support his case.

"The current global leader in industrial robotic automation is South Korea," the IFR announced in releasing statistics in February. "In this instance, the robotic density exceeds the global average by a good seven-fold (478 units), followed by Japan (314 units) and Germany (292 units). At 164 units, the USA currently occupies seventh place in the world. 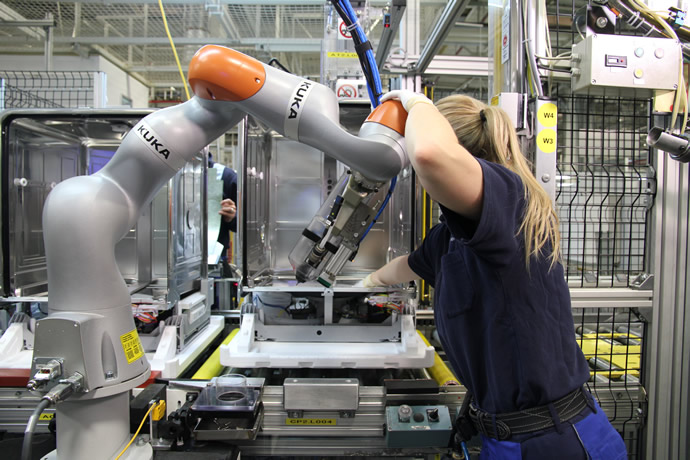 In the near future, collaboration with robots will be as important as collaborating with your fellow humans.
Photo courtesy of IFR and Kuka Robotics

"At 36 units per 100,000 employees, or about half the global average figure, China is currently in 28th place," the IFR continued. "Within the overall global statistics, this is roughly on a par with Portugal (42 units), or Indonesia (39 units). However, about five years ago, China embarked on a historically unparalleled game of catch-up aimed at changing the status quo, and already today it is the world's largest sales and growth market for industrial robots."

Color of Your Collar Won’t Matter

Even many white-collar jobs will not be immune to this trend, Ford noted.

“Automation is now climbing the skills ladder,” he said. “It is replacing people with college and professional degrees. It can even generate journalism and law now. Going forward, it is an assumption that almost any kind of white-collar job can be replicated by a machine or software.”

Christopher Sanders, executive vice president of German automotive supplier Kostal, said that robots are rapidly becoming commonplace in his company’s plants across the globe. “For every two employees, we will have one robot,” he said. “We look for people who can work together in the future. We believe that is the way forward. The workplace of the future is collaborative.” 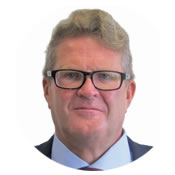 “For every two employees, we will have one robot. We look for people who can work together in the future. We believe that is the way forward. The workplace of the future is collaborative.”
— Christopher Sanders, Executive Vice President, Kostal

Sanders called the robot revolution “the fourth generation of industrial change” and added, “Systems are becoming very sophisticated these days. Some tasks can only be achieved through robots.”

“In 10 years, we won’t have the workforce needed in some places of India and Bangladesh," said K.P. Reddy, CEO of SoftWear Automation. "In 10 years, some of these factories will have to move to 80-percent automation.” 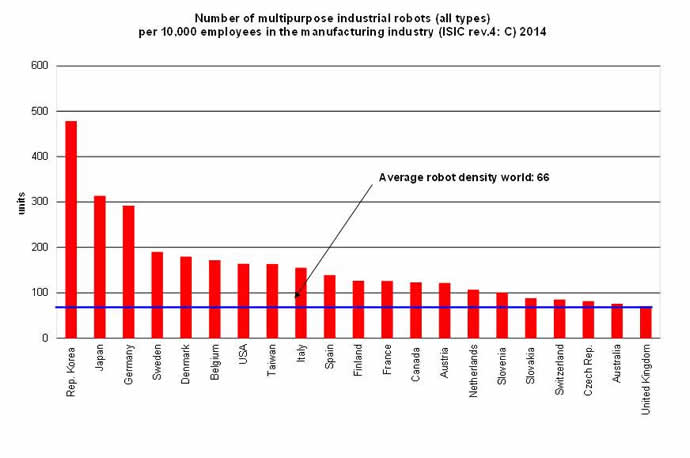 Robot density may be the next competitive advantage. China is 28th on this list, but closing fast.
Graph courtesy of International Federation of Robotics (IFR)

Jim Zortman, senior vice president of Northrop Grumman, noted that “we use a number of robotics. Some things are jobs that humans cannot do. It enables us to do more complicated production. But the number of people being replaced at Northrop Grumman is actually very small.”

Advice to Everyone: Upgrade Thyself

Ford concluded by noting that five key trends — all centered around robotics and automation — will dominate world commerce:

If it sounds like Ford is predicting a Star Trek-like world in the coming century, he says you need only look at what has already occurred.

“Agriculture has been disrupted the most by automation,” he said. “Picking vegetables and taking care of animals are the final frontier of agriculture. Every area of farming will be impacted by this.” 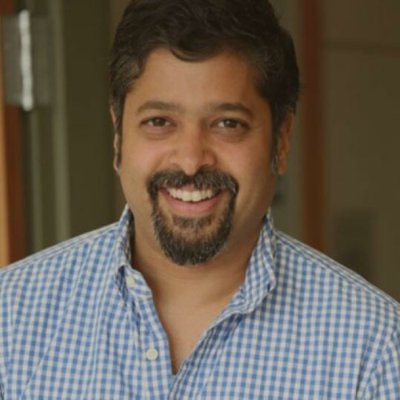 “The jobs most at risk are those that have not changed in 30 years ... If you have continuously educated yourself and upgraded your skills, you will do well. If you haven’t, you won’t.”
— K.P. Reddy, CEO, SoftWear Automation

Reddy says the garment industry may be next. “Why has the apparel industry not been automated? It is a cost factor,” he said. “Robots are still too expensive. Robots still cost at least $5,000. I work with a lot of startups that are using robots to do simple everyday tasks. Open sourcing is bringing these costs way down. You can automate almost every task now.

"The jobs most at risk are those that have not changed in 30 years," he added. "Employers still need really smart people who understand the business around them. If you have continuously educated yourself and upgraded your skills, you will do well. If you haven’t, you won’t.”

Watch for more reporting by Ron Starner on robots, automation and their effects on corporate location decision-making in the July "Technology Centers" issue of Site Selection. 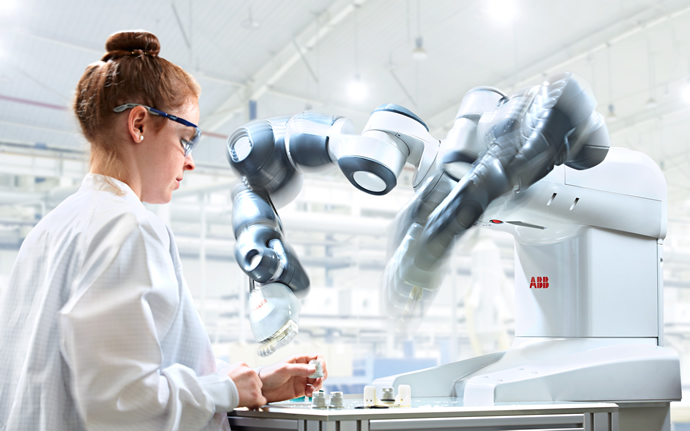 Are human workers ready to surrender control? More important: Are they ready to gain the necessary skills to stay relevant in the industrial workplace of the future?
Photo courtesy of IFR and ABB