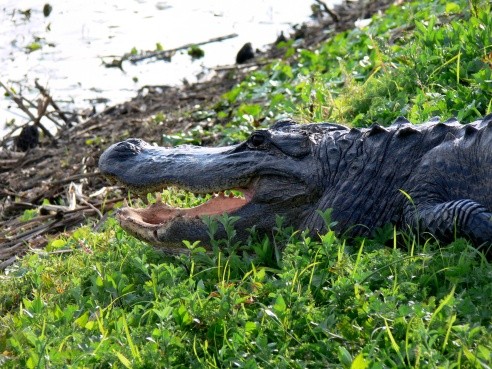 I backed off when he opened his mouth.
by ADAM JONES-KELLEY

My mother collects cats. She had seven in her home when I arrived this week, clearly an inferior number which local folk would no-doubt ridicule. So today we headed to the vet to "rescue" a new one.

When we arrived at the Micanopy Animal Hospital we were introduced to an orange tabby named Jazzy. One of the attendants told us he was a great cat, even though he was a “he-she.”

I looked up, startled, waiting for someone to laugh or explain the comment. No one did, and even my mother seemed unfazed. I had surely never heard of such a thing, and was going to need an explanation.

Apparently they thought I was merely seeking confirmation.

“Scuse me, whassa he-she ‘round these here parts?” (I try to communicate in ways the locals will understand.)

The answer, explained as if I were daft for not having known, is that Jazzy had a urinary tract problem, which the vet treated by giving him a sex-change operation.

Everyone seemed to agree this had been the only sensible solution.

I shudder to think how they’d treat a concussion.

A couple of miles up Highway 441 from the animal hospital you’ll find the Paynes Prairie State Preserve, a 21,000-acre wilderness brimming with wildlife, native fauna, and trees dripping with Spanish moss. Wandering around Paynes Prairie is a wonderfully relaxing way to spend an afternoon.

Unfortunately, I’m so ADD that even brief episodes of relaxation are, to me, much akin to Chinese water torture. The one area of adrenaline pumping excitement, however, is La Chua Trail, a section of the Preserve covered in lakes and ponds, and swarming with alligators.

Visitors to La Chua Trail can walk amongst the alligators, getting as close as they dare, without anyone stepping in to tell them it’s not safe. It’s terrifying and thrilling at the same time, and may be one of the few remaining places in the US where the government hasn’t walled off anything considered dangerous “for our own protection.” Someday, of course, an alligator is going to make a meal out of an unsuspecting tourist, and the state of Florida and Paynes Prairie management will be sued by multiple consumer protection groups. That’ll end the unfettered access to this natural world, but until then it’s an awe-inspiring experience that I highly recommend. 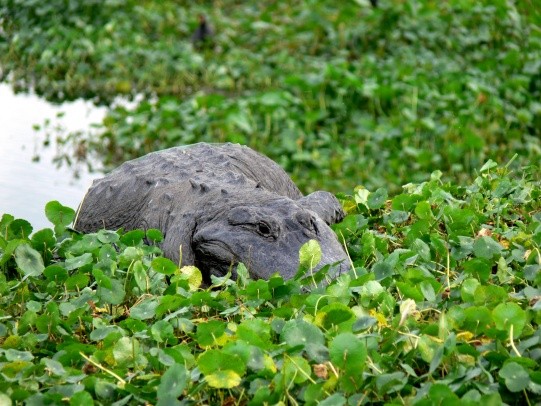 I thoroughly enjoy hiking La Chua Trail – it’s terribly exciting, even if a tad recklessly insane, to wander amongst alligators lounging in the sun. I applaud the Paynes Prairie management for posting a warning, then leaving the Trail alone, assuming adults are smart enough not to pet the wildlife. Too often in this country we’re denied simple pleasures like this because the government has walled it off in an effort to “protect the public.” Weren’t we once a country of rough and rugged individualists who didn’t need the government to take care of us? La Chua Trail is gratefully operated as if we still were.

After a long hike I’m always in the mood for bar-b-que, and some of the best can be found at Pearl Country Store. I have no doubt this name is confusing to local residents, as they don’t sell pearls, but they do make a mean brisket bar-be-que sandwich, and something perfectly wonderful called “corn fritters.”

I had never encountered these before, but they’re apparently made by deep-frying balls of sweet corn. I can feel my arteries hardening as I eat them, and I don’t care. They’re delicious. If I lived in Micanopy I’d have to buy larger pants, a set of overalls, and know that my life would be shorter, but filled with deep-fried Southern goodness.