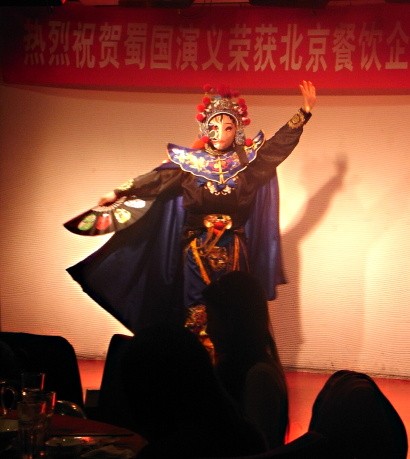 I stepped outside of Beijing’s international airport this afternoon, took a deep breath, began to suffocate, and wondered in fury who had stolen all the oxygen.

I’m told Beijing is a beautiful city. I wouldn’t know – I can’t see it through the smog.

Beijing’s coating of dense, disgusting pollution is legendary. I assure you, the accounts are not exaggerated.

The city apparently shut down factories and banned many cars from the roads in the weeks leading up to the 2008 Olympics in an effort to keep alive those competing in outdoor track events.

Perhaps having realized they have such a problem government officials should seek a more long-term solution?

My colleague Sia told me his first two visits to Beijing ended in him having respiratory problems and nose bleeds. I already have sinus problems; can’t wait to see what kind of a gasping wretch I become by week’s end.

I selected my hotel, the Sheraton Great Wall, because the name lead me to believe it might actually be located somewhere near “The” Great Wall. It’s not, though hotel staff assure me they have a wall that’s pretty neat, too. Beijing and I are off to a rocky start.

Adding insult to Injury, the Sheraton does not offer air conditioning this time of the year. It’s nearly 80 degrees in my room. When I called guest services to address the problem they sent me a fan. Whoopie. Much as I love sweating through my boxers before breakfast, I think I’ll change hotels tomorrow. The Sheraton Great Wall and I will not be friends.

Dinner tonight was an interesting experience. Shuguoyanyi is an elegant restaurant, and the food was mostly delicious.

The “traditional” Chinese dinner theatre, however, was odd. The highlight of the show was a man who danced about flinging a tea pot with an exceptionally long spout all around himself, pausing occasionally to pour water in glasses. The rest of the diners seemed impressed. I struggled to understand “tea-pot maestro” as a life goal for a child.

When the theme to Star Wars started blaring out of the speakers during one of the dance routines, I began to suspect this wasn’t a particularly old “traditional” Chinese theatre.

The menu tonight was mild compared to those in recent days. The only moment that gave me pause was when Sia said “You’re eating ass.”

I spit out a mouthful of food, hoped I’d heard incorrectly, and asked him to please repeat his statement.

After a week of hairy crabs, live cicada larvae, jellyfish, turtle skin, etc, I discovered I was ok with “eating ass.” 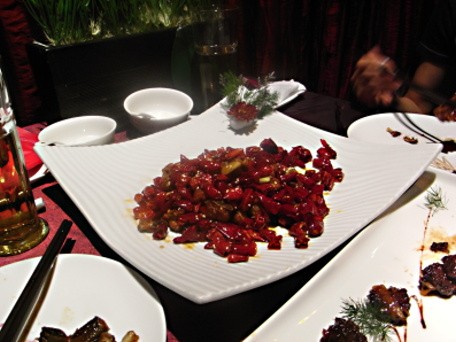 There's chicken burried somewhere amongst all those peppers

Beijing’s air may be putrid, but at least the traffic sucks.

And it does. Traffic in this city is ghastly. It took us 35 minutes to make the 7 mile drive from the restaurant to our hotel.

Sia warned me that it only gets worse from here.

So far Beijing hasn’t impressed. Shanghai is one of my favorite cities on earth, so Beijing has a lot to live up to, and Shanghai offers a lot of real bonuses like breathable air and roads on which cars do more than park.

I’m going to try to start fresh tomorrow and give this city a 2nd chance.

Beijing, you’ve got your work cut out for you.