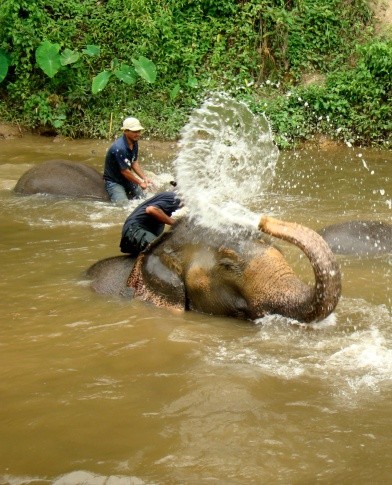 Adult elephants bathing in the Teris River
by ADAM JONES-KELLEY

Whoever said getting there was half the fun never flew 15 hours in economy class.

Between the apparently deodorant-averse large man in the seat next to me and the wailing baby two rows back, this flight promised to rank as just slightly less painful than watching a Pauly Shore movie.

A couple of hours after take-off a flight-attendant came ‘round serving dinner. The pound of lipstick caked on her upper lip had caused it to stick to her teeth during what was presumably an attempt at a smile. I barked a laugh before I could stop myself, which earned me a scowl and a curt “Chicken or beef?”

“Out? Then why’d you ask if I wanted chicken?”

“Do they have any extra chicken in 1st class?”

“You have an economy class seat, sir.”

“That explains why my knees are under my chin.”

“You want the beef?”

With that she plopped the plastic tray holding my foil-covered piece of meat in front of me and moved on. 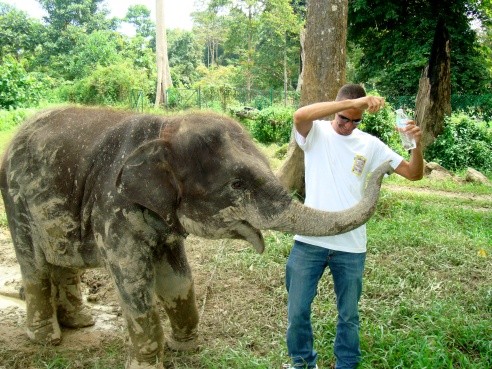 I just knew the 1st class passengers were having champagne and bacon-wrapped filet mignon. And probably getting foot massages while they ate. I was irritated. Damned 1st class passengers with their special off-limit bathrooms and their comfy lie-flat beds. They’re just sooooo superior, aren’t they? Bah!

Of course, I’m a total hypocrite when I’m actually in 1st class. I’m incensed when I see one of the peasants from the back creeping into our bathroom, and look down my nose at them as I exit the plane while they’re all made to wait. I’ve decided I’m ok with this hypocrisy, as long as I’m the one enjoying the good meal and seats that become beds.

So a mere 27 uncomfortable hours after leaving my home in Atlanta I arrived in Kuala Lumpur, a city I’ve always thoroughly enjoyed. I settled into my room on the 32nd floor of the gorgeous Le Meridien with every intention of a long nap, but was for some reason wide awake, so I decided to make the 2-hour trek from Kuala Lumpur to the Kuala Gandah Elephant Orphanage Sanctuary.

Kuala Gandah is a delightful elephant preserve along the Teris River bordering the Che’wong Orang Asli village - the last tribe of its kind found in Malaysia. For a small donation (it really is voluntary, though all are expected to pay something - how much is entirely up to you) you gain full access to the park, able to wander amongst and feed baby elephants, and view the older ones bathing in the river. Outside of an African safari, it’s probably about as up-close and personal as you can get with elephants in a quasi-natural environment. 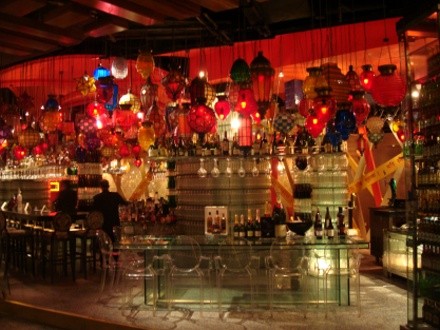 The baby elephant with whom I made friends was obsessed with my bottled water. I did all I could to keep it from him, but he was larger, and persistent, and by the time I gave in he’d thoroughly slimed my bottle and me. Note to future visitors – if an elephant wants something you’re holding, might as well give in early. It will save you the need to wash gobs of elephant goop off your shirt later.

After my afternoon with thirsty elephants I met my colleagues Sia and Tzelin for dinner. They treated me to a huge and mostly delicious meal of traditional Malay dishes on the “Feast Floor” at Enak in the Star Hill building.

My first day back on the road and I’m already gorging myself. This time around I made a point to pack my work-out clothes. Now if I’m only smart enough to use them.