Hit by a Tram in Prague 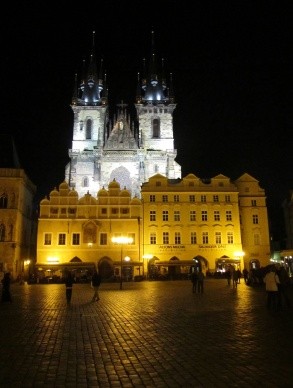 I recall stepping out into a Prague street.

I recall lying on my back, staring up into the underside of a tram as pain seared through my body.

I just don't recall what happened in between.

It turns out that just before strolling out onto Vyšehradskã Street, a one-way thoroughfare near our hotel, I looked right, into traffic, to ensure the way was clear. Being a one-way street I didn't look left. An unfortunate oversight since next to the three one-way lanes there was a tram lane, heading the opposite direction, with a huge tram bearing down on me at full speed. I stepped directly into its path.

My wife barely heard my barked expletive before seeing my body catapulted into the air and hurled several meters down the road. I landed with, I'm told, a sickening splat, and lay unmoving on the tracks as the tram's brakes squealed in protest, desperately trying to stop five-tons of steel.

The violence of the collision probably saved my life. Had I not been thrown so far, the tram would not have had time to stop before crushing me under its steel wheels. Soo arrived at my side just ahead of the tram's shaken and horrified conductor, who assumed he was approaching a corpse. 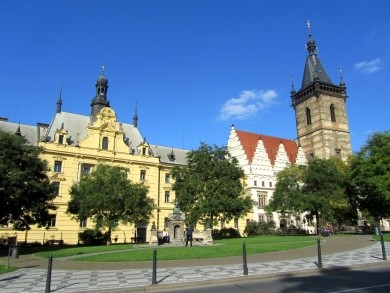 The only daylight shot I was able to take

The butcher's bill was a fractured hip, a couple of broken ribs, a bruised lung, other assorted broken and bruised parts and more blood than my wife ever hoped to see covering bits of her husband.

And I was lucky. Oh, so very lucky. My body will heal. I'll be fine.

My pride, I fear, was fatally wounded.

I'm quite certain that at some point during my formative years my parents mentioned to me that looking both ways before crossing the road was a good idea. They may also have cautioned that it was unwise to step in front of moving trams. And had they failed to impart that nugget of wisdom, one would have thought I could have come up with it all by myself. This ain't my first time in the big bad city.

Sadly, because it didn't occur to me, I'll be walking with a limp for some time. 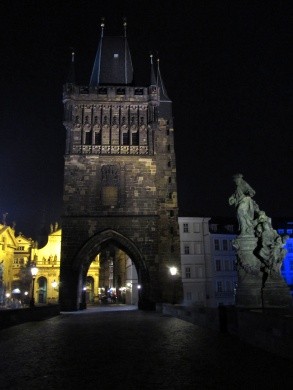 The grand entrance to Charles Bridge

Our time in what was once one of my favorite cities began almost as conspicuously as it ended. We opted to take the train up from Vienna, both because it's a grand adventure and because it's half the price of air travel. This wasn't one of the flashy high-speed trains crisscrossing Europe, but it was comfortable and a great way to see the countryside.

After a pleasent, five-hour trip we arrived in Prague, shuffled out of the train with our heavy, over-sized suitcases and made our way to the taxi stand at the other end of the station. 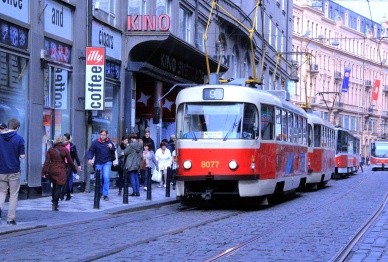 One of the notorious trams

Before I chose to play chicken with a tram, we had a little time to explore this glorious, 1,100-year-old city. Prague is pronounced "Pra-ha" by locals and most of Europe (no clue where the American pronunciation came from. Almost as bad as calling someone named Karluv "Larry" or "Charles." )

It has been said of Prague, "If European cities were a necklace, Prague would be a diamond among the pearls." It was once the capital of the Holy Roman Empire, has been the capital of countless principalities and empires, is the only European capital never to have been invaded, and features one of the world's oldest Astronomical clocks, called the Orloj. 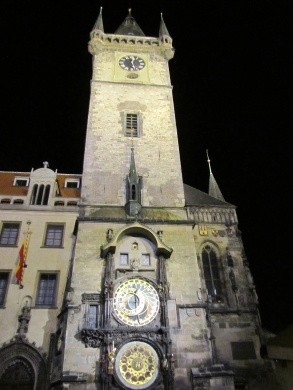 This fascinating clock has an equally fascinating history, and its true origin was shrouded in legend for most of the last 600 years. It was believed that it was built by the clock master Hanus, who refused to share construction plans with anyone. The legend goes that when city counselors found out that he was going to make another, even more spectacular clock, they became jealous and blinded him so he could not finish it. Hanus allegedly struck back at his tormentors by damaging the Orloj beyond anyone's ability to repair it.

Whatever the real story (it's now believed it was made by Mikuláš of Kadan in 1410,) Prague's magnificent Astronomical Clock is the third-oldest in the world and the only one still functioning. We couldn't wait to see it, and explore the medieval Old Town surrounding it.

Though the moat that once protected the city has been covered over by streets, the historic Old Town still feels very much like a gothic fortress. Its cobblestone streets, imposing towers and multi-pointed spires adorning centuries-old cathedrals give Prague an almost sinister feel at night. And since I face-planted into those self-same cobblestones during what was supposed to be our daylight tour, at-night was the only way I saw the city.

For our only emergency room-free night in Prague, we took a friend's advice and dined at Restaurante Ambiente Brasileiro, a superb Brazilian place in the historic Old Town. 700-year-old catacombs house this spectacular eatery, and we savored great food, French wine and a Cuban cigar while drinking in the dizzying concept of dining in a place almost three times as old as America! 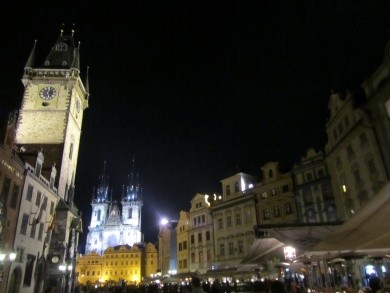 After dinner we strolled"˜round the Old Town Square, marveling at the iconic Church of Our Lady of Týn and magnificent clock tower, an entire area designated by UNESCO a World Heritage Site.

We were strolling across the magnificent Karluv Bridge (Charles Bridge, to Americans) which looks like something Disney created for Beauty &amp; the Beast, when they turned the lights off for the night. We didn't mind, assuming we had all the time in the world to explore the next day, or the day after.

Then I picked a fight with a tram, and lost.

There's a lesson here, one I'm surprised I must re-learn.

It's one we've all heard a million times, one we've all probably admonished others to do, yet one so easy for us to forget ourselves.

The lesson is this: Live.

Live every moment as if it were your last. 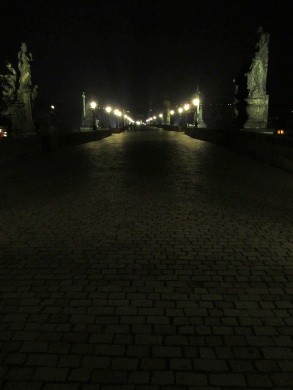 The Romans said "Carpe diem!" In Isaiah 22:13 the Bible says, "Let us eat and drink, for tomorrow we shall die!" An endless stream of modern pop singers advise us to live like it's our last day.

Whoever the messenger, the message is clear: Appreciate every day, every moment of your life. Don't put off adventures. Live!

Dorothy Parker once penned a poem that seems very real to me right now. She wrote:

Razors pain you;
Rivers are damp;
Acids stain you;
And drugs cause cramp.
Guns aren't lawful;
Nooses give;
Gas smells awful;
You might as well live.

Especially if you're fond of swan diving into moving trams.