"It's a local delicacy"

When I hear those words I know I’m going to suffer.

Many cultures consider it impolite not to try the local fare when offered, and Asian cultures in particular see it as disrespectful, especially when it’s something about which they’re particularly proud. This is usually not a problem as I’m rather fond of Asian food. Occasionally, however, “being respectful” and “overwhelming gag reflex” meet and battle it out for supremacy. Tonight was one such night.

On the way to dinner with friends I heard the dreaded phrase. I smiled, assured my hosts I was eager to try their famous dish, and silently prayed to the Gods of Food for mercy.

Once at the restaurant we were seated at a table with an open flame cooking area in the center, much like you’d find at a fondue place. This was looking up! I like fondue! How bad could this be? I was quickly relaxing, enthusiastic and ready for a great new discovery.

As I chatted with my friends the waiter began to place food on the table. All seemed to be in order. We had a beef dish, a pork dish, some veggies, and a dark pile of fat wiggling slugs.

What the holy crap!?!

I stared aghast as my plans for a torture-free evening crumbled around me. What was I looking at, why was it moving, and why was I the only one bothered by this? 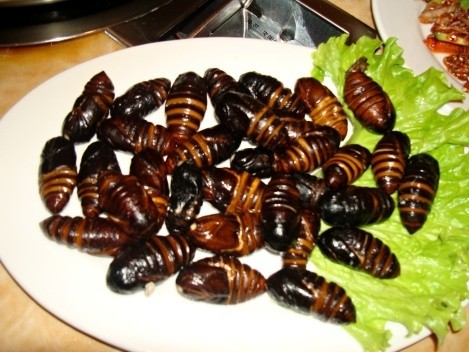 It’s rare that I worry whether my dinner could take me in a fight. Tonight I wasn’t so sure.

Shenyang’s local delicacy, to my great horror, turns out to be live cicada larvae. Let me say this again; LIVE CICADA LARVE. To eat them you take your chopsticks, hold their 3-inch thick, squirming bodies over a flame (not to kill them – just to get ‘em warm and angry), then pop them in your mouth, squish out the juice and innards, and spit the shell on your plate.

I know it sounds disgusting.

It’s so much worse.

I wish I could equate the taste to something you could identify, but until you’ve actually had one you simply can’t imagine. Perhaps strolling down Bourbon Street the morning after Fat Tuesday and then licking the bottom of your shoe would get you close. Eating just one of these things took all I could muster. Not wanting to appear disrespectful, I had three.

It took me thirty minutes and three cans of Coke to down three live cicada larvae. Even managed to smile during the process.

I did such a good job of pretending to enjoy this madness that my hosts promised to get me some more tomorrow.