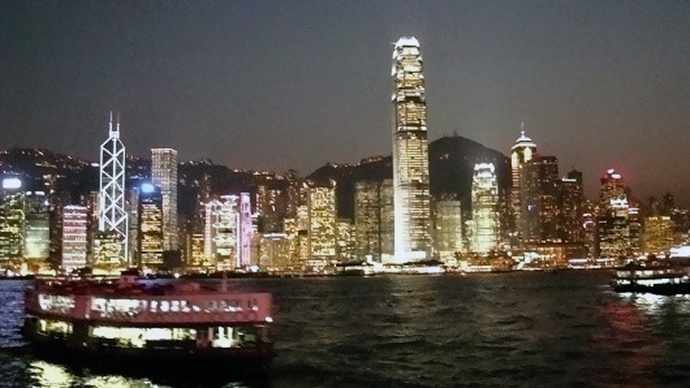 Sometime after landing in Hong Kong yesterday I devolved into a blithering idiot. (Some who know me might suggest this isn’t much of a change from my normal state of being, but I prefer to believe I can generally be trusted to tie my shoes and cross the street without much supervision.)

I’m not sure when this change occurred, but it first reared its clumsy head in the Sky Lounge atop the Sheraton Towers. Soo and I were sitting at a table by the glass marveling at the stunning view of Hong Kong's Victoria Harbor at night, when I noticed a man a short distance away staring at me. Every time I’d glance his direction he’d be looking in mine. This went on for a short while, with me becoming increasingly more agitated by the minute. I finally leaned over to Soo and asked if she’d noticed the jerk staring at me.

She looked up where I had indicated, then began laughing so hard I expected her to blow snot bubbles.

“Honey, that’s a mirrored column. You’re looking at yourself.” 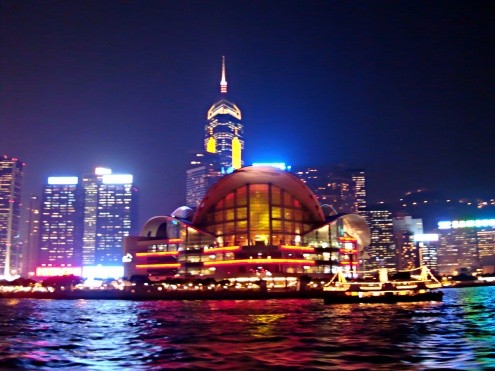 I had taken my laptop to the lounge to work while we ate and enjoyed the view. I’ve been to Hong Kong many times, and was particularly keen for Soo to see the famous symphony of lights, a spectacular multimedia display marked by Guinness World Records as the World's Largest Permanent Light and Sound Show.

More than 40 buildings on both sides of Victoria Harbor participate with colored lights and laser beams performing a synchronized spectacle to music.

We barely had time to drop our bags in the room before I rushed Soo out the door, explaining that the show started at 7:00pm and we needed to hurry to grab seats by the window. I was surprised to find several tables available, but thought nothing of it as we sat down and enjoyed some dim sum while we waited.

I was disappointed, telling Soo that, obviously, the show must not run on Sundays.

Soo, not suffering from her own moron moments, decided to ask the waiter why there was no show at 7:00 instead of simply accepting this excuse.

I was determined not to appear daft twice in 20 minutes, so nodded knowingly as I told Soo that this must be a change from previous years.

The waiter, apparently in an effort to ensure he received no tip, overheard and said “No, always 8:00.”

I decided sulking would make me feel better, and my laptop battery was running low, so I lurched off to the room to plug it in, leaving Soo to guard our precious seats for the show. 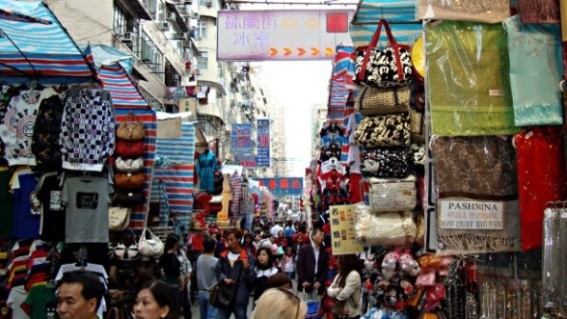 10 minutes later I returned to Sky Lounge even more sulky and embarrassed than I had been when I left. Soo looked at me quizzically as I leaned over the chair to fetch my laptop case, which held the charger, then giggled as I stomped back off to the room.

Moron moment #3. And we’d been in town only a few hours. Perhaps there was something in the air?

Thankfully, the grandeur of the light show was enough to distract Soo from my failing mental faculties, and after dinner we happily set off for some shopping at the Temple Street night market.

We have a long list of people for whom we hoped to find exotic Christmas gifts, and the night market, though fascinating, wasn’t exactly what we were after. It’s more like a flea market, with some few merchants selling interesting local arts and crafts, lots of roadside dining (nothing you’d recognize as a restaurant or even a café, but a step up from a vendor selling hotdogs on a NY street corner,) and a lot of others selling just plain junk. 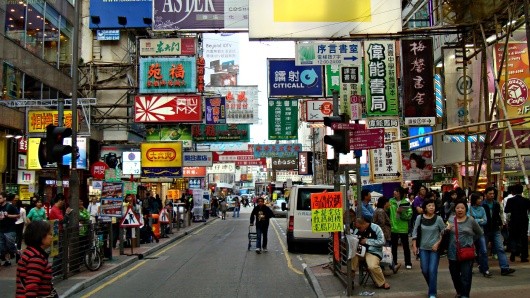 Soo was particularly interested in finding a couple of Prada purses this trip for herself and a few friends. These were not to be found at the Night Market, but I confidently assured her that I knew exactly where to go in Hong Kong for black market purses, so we called it a night and made plans to tackle the Ladies Market on Tung Choi Street in Kowloon the next day.

The Ladies Market is the most popular and famous shopping street in Hong Kong. It’s on most tourists’ “can’t miss” list, offering a smorgasbord of goodies including name-brand clothing, fashion accessories, paintings and carvings from local artisans, t-shirts, luggage, etc. The name is a bit deceptive – it was originally called the “Ladies Market” to distinguish it from “Men’s Street,” which is now Temple Street. You’ll find every bit as many items for men in the Ladies Market.

Based on past experience I assured Soo that the Ladies Market was precisely where we needed to go to find black market purses.

So, of course, we found none. 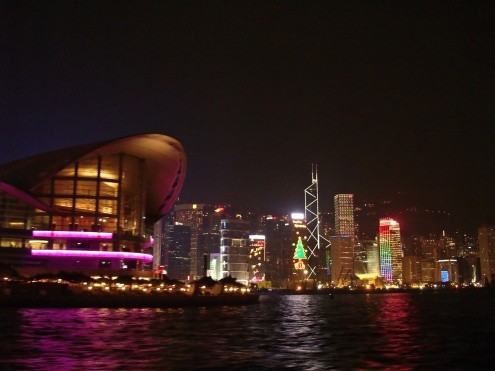 Another view of Victoria Harbor, Hong Kong at night

We had walked through several blocks of the market when I began to worry. Typically you’ll be approached by hawkers as you wander through, and in the stalls selling off-brand purses you simply ask, discreetly, and they’ll whisk out catalogues from Prada, Coach, Louis Vuitton, etc. You show them what you want, they call off somewhere to see if they have the one you selected, and if they do a runner appears about 20 mins later with your selection. I’ve gone through this exercise many times.

This time, nothing. Anytime we’d ask someone about buying black market purses we’d get a curt “no” and be promptly shoved out of whatever stall we were in. I was confused. Soo was amused. Based on my blunders yesterday she simply assumed I hadn’t the slightest clue what I was talking about.

Finally, as we neared the end of the market, a local merchant whispered our answer to us; the market was, that day, flooded with under-cover police officers. He very quietly told us to come back the next day for anything we wanted.

We will, and in this one case at least, I was pleased to have avoided another moron moment.