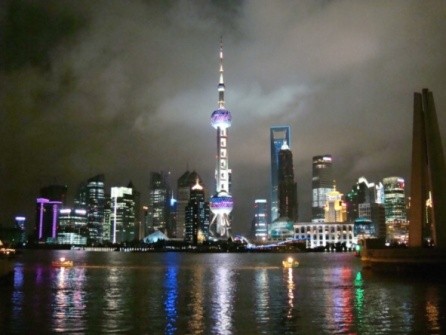 I’m back in Shanghai, and as always when I visit China’s commercial capital, a bit awed by the grandeur of the city lights. China lights its cities well, whether it be Hong Kong, Shanghai, or even Shenyang, turning the skylines themselves into tourist attractions.

Shanghai is gearing up to host the World Expo later this month, and there are city-wide improvements on evidence everywhere; new, tree-lined sidewalks, highways and underpasses bathed in blue light, not a speck of trash anywhere. Shanghai was already impressive. It’s near spectacular now. I’m disappointed I won’t still be here to see the Expo – bet it will be a heckuva show!

Shanghai is responsible for one of my latest addictions. On a trip in December a colleague announced after dinner that he was taking me to an executive club. Being American “executive club” sounded like “strip club”, which surprised me as I didn’t think they had them in conservative China. Not wanting to offend my host, and more than a little curious as to what a Chinese executive club might be, I agreed, and off we went.

We arrived at a private club overlooking the river and were escorted into an opulent semi-private suite. There were 6 other executives there, and all seemed to know my associate. There were a few beautiful women in the room, but they were wearing evening gowns and serving drinks, not climbing poles and gyrating to hip-hop music. I was confused. 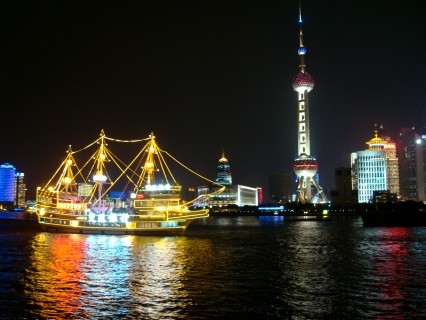 We were seated on a comfy sofa and served plates overloaded with exotic fruit. Somebody handed me a microphone. To my great horror I learned that “executive club” actually meant “karaoke club.” I suddenly felt ill.

I dropped the microphone as if it burned. My colleague raised an eyebrow, but picked it up and passed it to another man. He leaned over and whispered that it would be seen as rude if I didn’t sing. I explained that it would be far worse if I did sing, as my voice has been known to spook small children and animals. He chuckled, told me to focus on dicing, and handed me a drink.

Dicing? Gambling and alcohol? Yes, I believe I can stay a while.

And that’s where my addiction began.

Dicing is played in bars and clubs all over China. Each player gets a leather cup holding 5 dice. You can play one on one, or in a group. This night it was one on one, me against Xiao Yu, a hostess in the club. And as luck would have it, I am a dicing god!

I wish I could tell you there was some skill involved. There’s not – you shake up the dice, tip your cup, and see what you have. It’s entirely luck. The loser gets one re-roll against the winner. If they take the lead, the person now behind gets one roll, and so on. If you’re playing for drinks, as we were, the loser does a shot. The game is 100% luck, and on this night, the luck was all mine.

I was so lucky, in fact, that we attracted quite a crowd. Everyone in our suite wanted to throw against this American who couldn’t lose. Word got around the club and others came to our suite to throw against me. I was winning on average 7 out of 8 throws. I was on fire! I convinced myself that it really wasn’t luck, that I was the world’s greatest dicer. I envisioned quitting my job and traveling the world throwing dice!

Then they handed me the microphone again. They took my dice cup and told me to sing. THEY TOOK MY DICE CUP! I was like a heroin addict clamoring for his next fix. I sang. 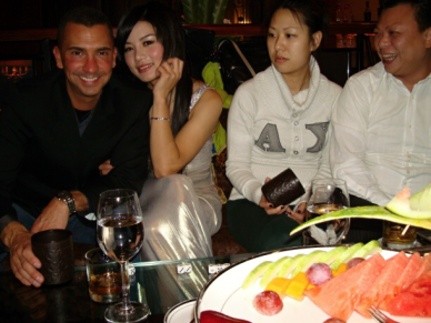 Xiao Yu winced. My colleague actually cried. Horrified executives stared on, stunned that such sounds could come out of a human being. One man compared it to a goat giving birth.

After that no one asked me to sing again.

I merrily threw dice the remainder of the evening.

And I've been an addict ever since. I now keep dice cups in my car. I’ve bought a set for my favorite Atlanta pub. I’ve gotten my friends hooked.

If you find yourself in Shanghai, try it out. I bet you’ll be addicted, too.