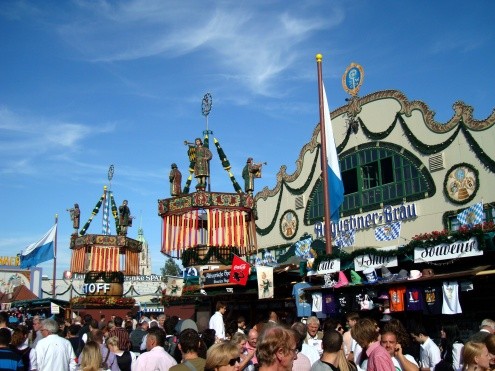 Over the decades Oktoberfest has come to be celebrated and enjoyed the world over, mostly as an excuse to party and drink beer. Munich, Germany, however, is the only city which can lay claim to having the original Oktoberfest, and boy do they do it right! It’s by far the largest in the world, and from what I’ve experienced, absolutely the most fun.

I wanted to entitle this blog “Germans behaving badly,” because I thought that would be cute, but the fact of the matter is that’s just not true. (If a fight breaks out at Oktoberfest it’s likely to involve Italians.) The Germans can be found in the beer halls drinking from sun-up to sundown and gorging themselves on traditional Bavarian foods like bratwurst, frankfurters, wiener schnitzel and pork knuckles. They spend all day listening to bands playing traditional Bavarian music whilst singing and dancing on the tables. They’re unabashedly happy, boisterous, and eager to welcome new friends from far and wide. (They will wonder out loud about your sanity if you’re not wearing traditional Bavarian garb, but they’ll still drink with you.) 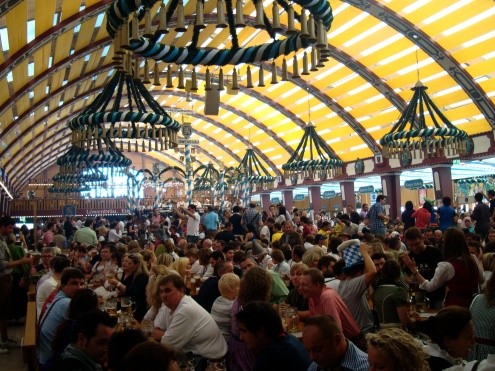 Inside the packed Lowenbrau Beer Hall

Oktoberfest began in Munich way back in 1810 to celebrate the wedding of Crown Prince Ludwig to Princess Therese of Saxony-Hildburghausen. The festival was so popular that they did it again the following year, right down to the hugely popular horse-races, which ran until 1960. The modern Oktoberfest is held for 16 days, ending on the 1st Sunday in October, and attracts about 6 million visitors, 2/3 of which are from Bavaria.

Germans, and especially Bavarians, take their beer seriously. Germany even has Federal laws dictating how beer must be prepared. And if Oktoberfest is about anything, it’s about beer. Local breweries brew a special beer for Oktoberfest which is slightly darker and stronger in taste and alcohol. The six Oktoberfest breweries are Spaten, Augustiner, Paulaner, Hacker-Pschorr, Hofbräu, and Löwenbräu. They each have their own massive tents on festival grounds housing long tables full of drunk and happy revelers.

To get a seat at these tables you either have to be extremely lucky or plan well in advance. Many locals reserve their places months ahead of time, and arrive at 7:00am to secure their seats and begin their drinking. 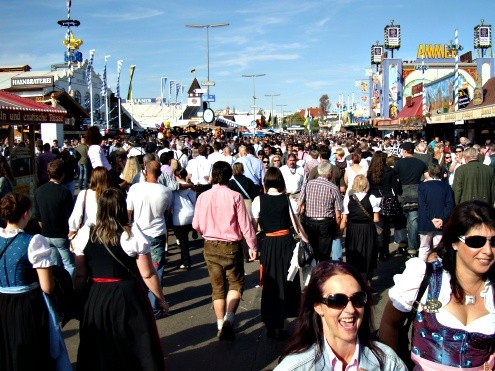 Soo and I, not big on arriving anywhere at 7:00am, opted for the “get lucky” approach. Happily, we did.

We had actually planned to enjoy the huge Sunday breakfast buffet in the Westin at 9:30, then go straight to the festival grounds. We even had the hotel give us an early-morn wake-up call.

While I admire my optimism, I’m not sure what I was thinking; That I actually believed, even for a moment, I’d get out of bed for any reason at that hour on a Sunday is laughable. We made it to Oktoberfest around lunch.

We wandered the grounds for an hour or so while Soo gawked at the pure spectacle of it, eventually making our way into one of the beer halls. Soo’s eyes were almost as wide as her mouth, which stayed open in a half-stunned, half-delighted grin nearly all day. 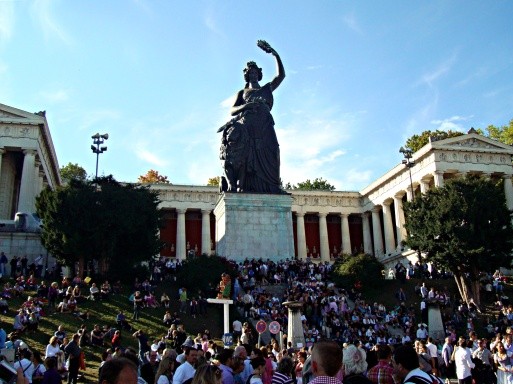 The Statue of Bavaria, watching over Oktoberfest since 1850

The beer hall was, predictably, packed, with not an open seat anywhere. We walked straight through and out the back door. Soo found it a bit claustrophobic and stuffy, so we decided to try to find seats at one of the tents with outside benches. I told her with great confidence that our chances of finding some were about as good as David Spade’s chances of winning an Oscar.

So of course we found some in about 30 seconds.

Soo suggested that perhaps I should have a clue as to what I’m talking about next time I speak with such confidence.

We sat down with a group of German grad students who all spoke English and, as happens at Oktoberfest, decided immediately we were their friends. 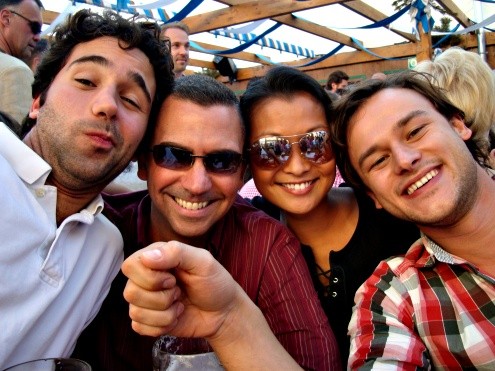 Soo is a little shy at first in new groups, but managed to get past that after only three 1-litre glasses of ale. (She got over it so thoroughly, in fact, that one of our new German friends grinningly told me how cool it was that my “friend” was so into his friend, and suggested we give them some space. I believe I was grumpy over this for a brief moment, but my own beers and the Cuban cigar we were all sharing made it difficult to stay so.)

We spent the entire afternoon and early evening drinking and laughing with our new friends, only tearing ourselves away that night because we had to meet clients at our hotel for dinner.

On our way out of the festival we bought a bag of traditional Bavarian baked nuts. Soo, a smidge tipsy, devoured almost the entire bag, but very thoughtfully shoved the odd nut toward my mouth. 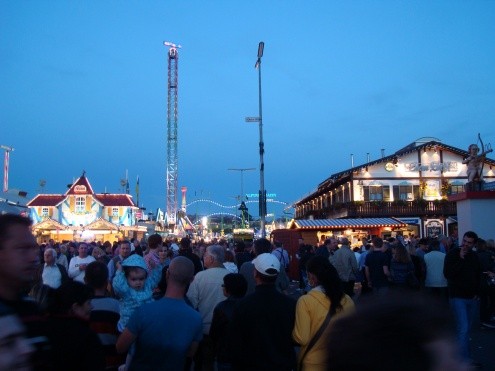 Occasionally she even got one in my mouth. Those few were delicious.

Within seconds of walking back into our hotel room Soo muttered “gerbee frenah kershi wurmble” and passed out on the bed.