One Night in Bankok 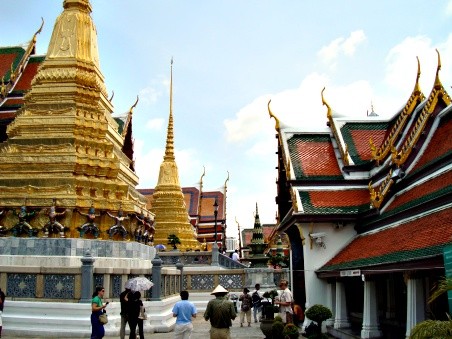 The line from the famous song says “One night in Bangkok makes a hard man crumble.”

During daylight hours, however, the city offers one of the most stunning historical spectacles in Asia. Bangkok’s Grand Palace (Phra Borom Maha Ratcha Wang), like so many of the dazzling royal sites throughout this ancient land, is awe-inspiring. The Thai Royal family still resides in a section of this sprawling complex, but the rest is open to the public. It’s laced through with magnificent architecture, statues and temples, including the Wat Phra Kaew (Temple of the Emerald Buddha), which houses the famous 14th-century Emerald Buddha statue. 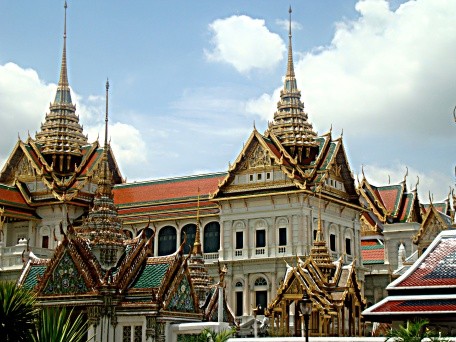 It takes an hour fighting Bangkok traffic to reach the Grand Palace, and you’ll need several hours to wander the Palace grounds, but it’s well worth the time. The ancient Siam architecture, golden spires and row upon row of religious statues are like nothing I’ve seen anywhere else on earth - I recommend it whole-heartedly.

Just outside the Palace is a wonderful local food market with street-vendors offering an endless variety of local meats and fruits. It’s a delicious meal for less than $1.

If you find yourself in Bangkok a visit to the Grand Palace should be on your can’t-miss list.

The Siam Niramit show, however, is to be avoided.

The concierge at the Westin Sukhumvit (which overall is a stupendous hotel) recommended this. He even said it was like Asia’s Cirque du Soleil, only bigger(!) Sure it is, if Cirque were dinner theatre in a cheap hotel. They even boast that the show includes “state-of-the-art technology.” I suppose they’re referring to lights and a flickering video screen.

Siam Niramit tells the history of Siam, which became Thailand, but it’s so campy and cheesy that half-way through I was squirming in my lumpy seat. 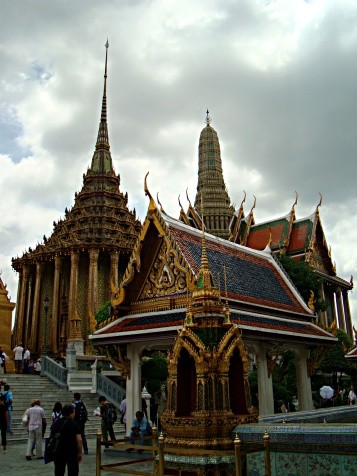 What you get is just this side of a cruise-ship buffet. And not a good buffet – one of those you’d find on Carnival for passengers who don’t think 3 feedings is nearly enough for one day.

I was so irritated by the whole thing that I even had a hard time being excited by the post-show elephant petting in the courtyard.

I closed out the night with my friend in an upscale local bar. Mr. Fong and I were enjoying drinks when I commented on how stunningly beautiful Thai women were. He followed my line of site, then chuckled, saying “I think that one’s a boy.”

This lead to an awkward moment as he actually thought I was telling him to leave. (I must remember not to use American slang when traveling abroad.)

Once seated again, my friend explained that Thailand is the transsexual capital of the world (they even have an annual transsexual pageant, many of whose competitors would do quite well in a Miss World pageant. If they were actually Misses, of course.) 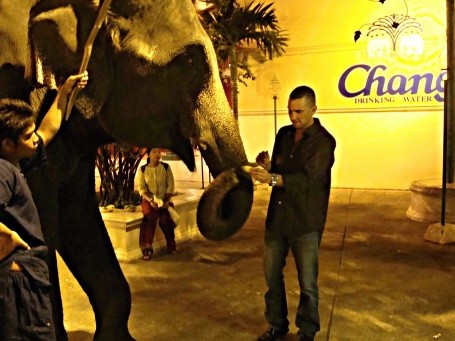 Elephant-petting after the Siam Niramit show

More sex-change operations happen in Thailand than anywhere else on earth, and many more seemingly beautiful women are actually men in drag. I can imagine many a westerner taking what he believes to be an exotic woman back to his hotel only to be surprised to find hardware he wasn’t expecting.

This was both fascinating and hysterical to me, but I assured my friend I was quite capable of determining for myself which ones were really born men.

Turns out I’m not.

Most of these gender-changing women (we would say women at this point, right?) are quite open about it and even find it funny when asked. My friend took great delight in antagonizing me by making me guess as beautiful women strolled into the bar.

By the end of the night I think I was about 0 –for – 20, and my ego was thoroughly demolished. Three nights in Bangkok was all it took.