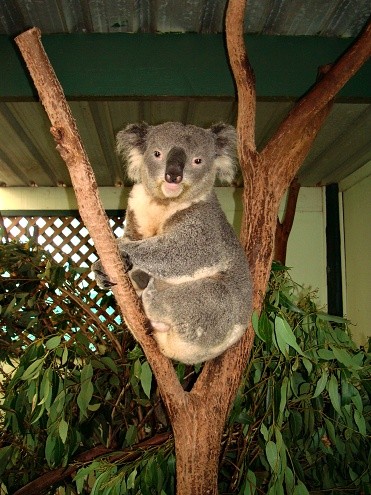 This is who greeted us at Featherdale Wildlife Park

Australia is a rather unique place.

It’s the 6th largest country on earth in total land mass, about the same size as the continental US. It’s also a continent, making it the only continent which is also a country.

Australia is also an island, making it the only island which is also a continent.

Australia is home to fascinating animals like the Emu, the 2nd largest land-bird in the world, capable of running as fast as 30 miles per hour. No other continent has more mammals who lay eggs, or who carry their young in a pouch.

About 80% of Australia’s plant and animal life exists nowhere else on earth. And many are deadly: There are more fatal shark attacks in Australia than anywhere else on earth; of the ten most poisonous snakes in the world, all are from Australia; there are more saltwater crocodiles here than anywhere else; and the most lethal species in the world of things like the funnel web spider, box jellyfish and stonefish all come from Australia.

This nation began as a penal colony for the British Empire, but now boasts a much lower crime rate than Britain.

Australia leads the world in immigration, with 24% of her citizens having been born in other countries (the number is 10% for America.) 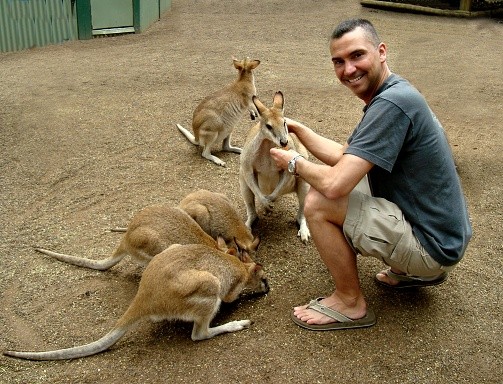 Feeding a group of wallabies at Featherdale

Twenty-two million people live on this vibrant island-continent, slightly more than are crammed into New York City, alongside about 25 million kangaroos and wallabies.

It was the latter that Soo and I couldn’t wait to meet.

So, after a hectic day of meetings with my colleague Zorka, Soo and I ventured out to find a place where we could interact with the creatures for which Australia is most famous. A friend recommended the Sydney Wildlife World, and we’d heard good things about Koala Park, but our driver insisted we’d be better off at Featherdale Wildlife Park. Though less known than her two sister-parks, Featherdale offered, he assured us, a much better opportunity to get up close and personal with the animals, and was far less expensive. 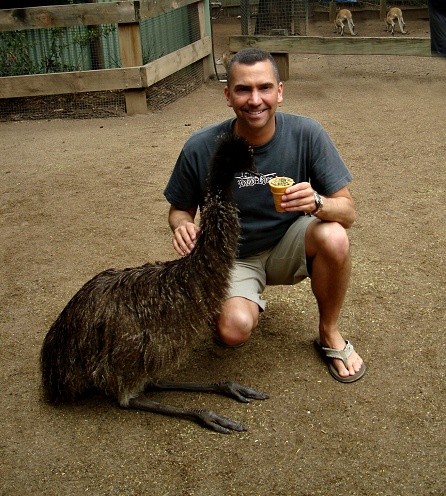 Feeding one of the massive Emus at Featherdale

I can’t speak for the other two, but Featherdale was certainly everything he promised. Soo and I spent two giddy hours petting, feeding and playing with sleepy koalas, inquisitive kangaroos and hungry wallabies. We were so immersed in native Australian animals that we repeatedly had to shove away large, pesky Emus trying to steal the food we were feeding to wallabies and kangaroos. It was pure, unabashed, child-like fun, an experience not to be found outside this wondrous country.

Our driver did his best while we were there to make sure we got everything possible out of the experience, bringing us food for the animals, literature about the park, and snapping endless pictures of us laughing and playing.

The rest of the afternoon, however, he did his best to make sure we were contemplating suicide.

We were with him for 5 hours. He spoke enough to fill ten. 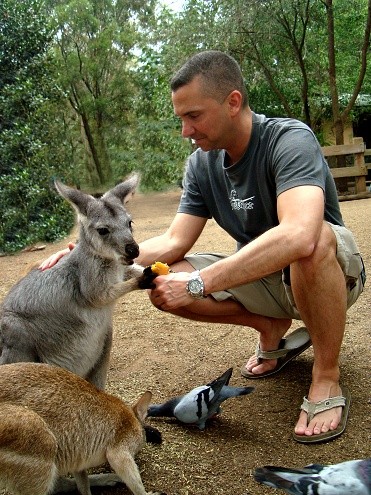 Feeding a grey kangaroo at Featherdale

We learned about his daughter’s love life. We know how much she paid for her condo and where it is. We know all about the family from Dubai he drove last week. We know how big his home is, how many of the bedrooms he added on after he purchased it, and what he did on his first date with his wife. We know about his trip to the Moscow Olympics in 1980, and all about his career aboard a Polish merchant ship.

When we stopped for a bite at Doyle’s, Soo and I ran screaming from the car, each convinced blood must surely be seeping from our ears.

Doyle’s is an utterly charming family-owned waterfront restaurant which has been serving fresh local seafood on Watson’s Bay for generations. It’s about a 20-minute drive out from Sydney’s city center, past Bondi Beach, and features some of the most delectable fish ''n chips around. Soo’s grilled prawns were likewise yummy, and relaxing in the century-old seaside eatery listening to anything but the sound of Andrew’s voice was just the balm we needed.

We finished our day with a stroll round Darling Harbor, the old bustling market wharf reborn 20 years ago as Australia’s foremost waterfront entertainment center. Stretching from Paddy''s Markets and Sydney Entertainment Centre in the south to King Street Wharf and the Maritime Museum in the north, Darling harbor is home to Star City Casino, the Sydney Aquarium and Sydney Wildlife World, to name just a few. We desperately wished we’d had more time to explore. 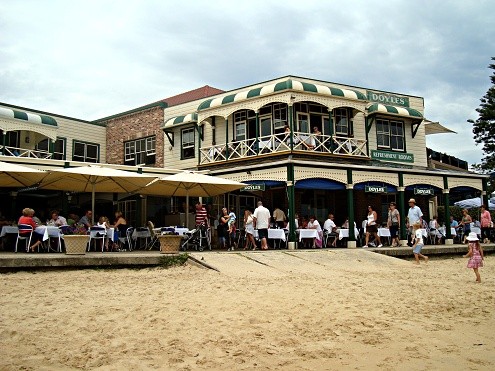 Doyle's Seafood on the beach in Watson's Bay

Jabbering driver aside, Soo and I were left giddy from our amazing day. As we strolled along Darling Harbor watching the sun set over the sparkling water, we reminded each other how remarkably lucky we are to enjoy days like this.

Today was the last day of summer in Australia. It was also our last day in Sydney. Her 5 million residents cover an area larger than Dallas or Atlanta, yet Sydney somehow retains the welcoming, neighborly feel of a small beach town. Sydney is a gorgeous blend of old, magnificent British architecture and modern gleaming skyscrapers, perched along picturesque beaches and coves -- you can’t help but be seduced by Sydney. The people are friendly, the climate is mild, and even with a yammering escort, there are few places I’d rather be. I’ll miss it very much.