Searching for Friday in Sydney 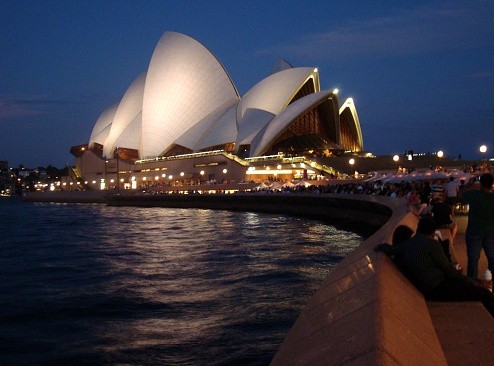 It was there when I left home on Thursday.

Those I spoke to upon arriving in Sydney swore they’d seen it the day before.

I never got it.

In coming to Australia, 16 hours ahead of Atlanta, you "lose" a day. We left home Thursday afternoon and arrived in Sydney Saturday morning. No Friday. Simply didn’t exist for me.

This is terribly unsettling.

No one asked me if I’d mind doing without Friday. There was no conversation with airline personnel about it prior to take-off. No one said “Did you pack your bags yourself, have they been in your possession since, and will you be needing a Friday this week?”

I would think if they were planning on stealing my Friday someone should have mentioned it at some point along the way. It’s horribly impolite to simply pilfer a day from someone with nary a word.

The flip side, I’m told, is that you “gain" a day on the way home, time-warping so that you literally land in Los Angeles before you leave Sydney (14 hour flight, 16 hour time difference.) Unfortunately I leave on a Monday, meaning I’m trading a Friday for a Monday.

I don’t care to have an extra Monday, thank you very much. This is not a good trade.

So, Saturday morning, after a long and uncomfortable journey during which we misplaced Friday, Soo and I stepped off our plane in Sydney eager to see the land of kangaroos and Mick Dundee.

Before I’d even finished absorbing the news that I'd been robbed of one of my favorite days, Soo and I were detained by immigration because the visa folks in the US had failed to include the hyphen in my name on my Australian visa.

We were not off to a good start.

the view of Sydney Harbor Bridge from Circular Quay at night

Or, more precisely, the sight of the Sydney Opera House gleaming across the harbor on this sunny afternoon cheered us immensely.

After dropping our bags in our room at the gorgeous Westin Sydney we walked the few blocks down the road to the Harbor and along Circular Quay to the Opera House, the iconic symbol of Australia’s biggest city for nearly four decades.

Most people have seen pictures of the Sydney Opera House and know it to be a dramatic structure, but nothing compares to seeing it in person; it’s marvelous, especially on a perfectly clear afternoon with the sun reflecting off the waves crashing against its base. Hysterically, however, the purpose for which it was built – to serve as Sydney’s performing-arts center – was largely overlooked in its grand design. The famous concert hall apparently has lousy acoustics. I don’t speak from experience, as I’ve not seen a performance there, but this embarrassing truth is as commonly accepted as the need to keep the British out of the kitchen.

one of the strange birds wandering around beautiful Hyde Park

Facing the Opera House across the water is Sydney Harbor Bridge, the world’s widest long-span bridge connecting Sydney’s Central Business District and the North Shore. The bridge itself is gorgeous, and was the symbol for the city before construction of the Opera House.

After exploring a bit Soo and I settled into a table by the water at the Sydney Cove Oyster Bar.

The view was spectacular, and the food would have been great if we’d ordered it from a pub and paid $5. I had fish –n- chips and apple cider, and they were good, but based on the tab the proprietors seemed to believe they had served me caviar and champagne.

Soo’s oysters weren’t bad, going down. She threw them up a short time later, announcing that they were far less tasty the 2nd time around.

After regurgitating lunch Soo collapsed for a nap, while I went shopping.

I hate shopping. Regrettably, after three decades of traveling the globe, I’m still not competent enough to pack all by myself.

I have this bad habit of forgetting important items when I travel. (I once attended a UN conference in Africa with my neatly pressed and cleaned suits hanging on my dresser.)

This time I’ve jetted off to Australia, she of the famed white sandy beaches and crystal clear waters, without a bathing suit.

As so often noted in my blogs, I am a moron.

In anticipation of our summertime jaunt Down Under Soo bought two new bikinis. She explained that these new bathing suits were “for the season,” as if I had any clue what that statement meant. I’m a man – we don’t buy anything “for the season.” If I’m lucky I’ll get a new bathing suit “for the decade,” but only if the holes in my old one have grown to sufficient size that parts of myself which should remain private are poking through.

So I went off to find a bathing suit while Soo slept off her jet-lag and vomitous oysters.

The Queen Victoria Shopping Mall, just down from the Westin, offers just about anything you could possibly want, including bathing suits. Unfortunately the items for purchase seemed to have been priced by the same people who own the Oyster Bar, so I bought the Most Expensive Bathing Suit on the Planet.

I don’t even like it much, and I’ll probably lose it before I get home. But at least I paid a fortune for it.

view across Sydney Cove of the city skyline

After shopping, and because I thought she would really enjoy it (certainly not because I was bored and thoughtless) I woke Soo and suggested we check out Sydney Cellar Door, the wine festival being held this weekend in Hyde Park.

Soo is a bit of a wine connoisseur, so this should have been heaven for her, but she was exhausted, it was jam-packed and the humidity was fierce, so this wasn’t much fun for either of us. We only bought two bottles. (I shudder to think how many we’d have acquired had we really enjoyed it.)

For dinner we returned to Sydney Cove and enjoyed a scrumptious meal at Toaster Café. I had kangaroo filets (how could I not?), and even convinced Soo to try one. She didn’t like it, but didn’t throw it up either, so I figured we were making progress!

It was a great first day Down Under, even though I never figured out how to get my Friday back.