Stupid Tourist Questions While Bare-assed on The Bridge 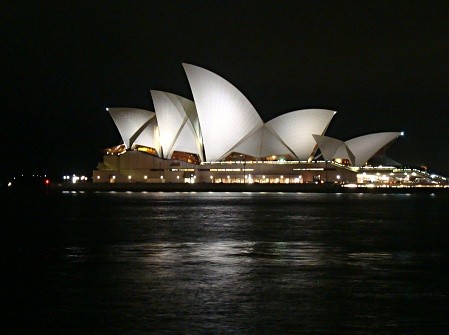 Today I dropped our pants and walked across the Sydney Harbour Bridge.

It was wonderfully exciting, but not because I was going commando. In fact, I was surrounded by people who had similarly dropped trou before the crossing. Several of those did seem a bit befuddled by the whole thing, terribly unsettled by all these “trouser-less shenanigans.”

Thank you for joining us, Stupid Tourists.

It embarrasses me to admit that so often in my travels, when I encounter a group addlebrained, self-absorbed dolts, they’re American. (I even once invented a country and claimed to be from it, so embarrassed was I by my countrymen. Unsurprisingly, a group of Yanks I encountered believed me unhesitatingly, and even claimed to have heard of the imaginary nation.)

Today’s stupid tourists were brought to you by Arkansas, and this group of overweight, fanny-pack wearing neanderthals, who only recently discovered that life exists beyond our borders, may have been the worst I’ve met yet. 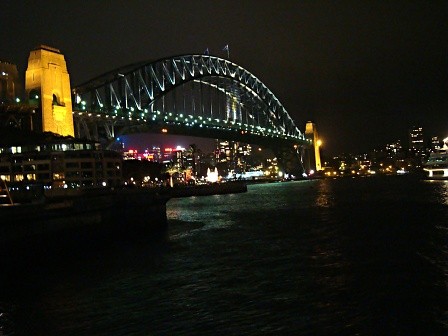 Deeply suspicious of anyone with an accent, this lot, led by Dan, a man I remain quite convinced can’t manage to feed himself without assistance, lobbed a barrage of asinine questions at Nick, the wonderful guide who would lead us up and over the top of the Sydney Harbour Bridge. So ludicrous was Dan that it was a full 30 minutes before I realized that he wasn’t making jokes, and was, in fact, that stupid. (I’d feel a tad guilty about eviscerating the man so thoroughly if I thought there was actually any chance he could read, much less comprehend that we’re talking about him here.)

I wound up stuck with Dan for three hours because, like 2.7 million people before me, I decided to undertake the magnificent Bridge Climb, which takes you up to the very apex of the bridge. Not along the pedestrian walkways, but literally up on top of the steel girders holding the bridge together. It boasted, quite justifiably as it happened, of offering the best panoramic views of Sydney imaginable, and promised to be a bit exhilarating in the process.

The Bridge Climb organizers apparently have plenty of experience with Stupid Tourists, and the pre-climb tutorial, which should have taken about five minutes, instead lasts more than 30, going to great lengths to ensure that Dan, and anyone with whom he might have bred, know how to avoid hurling themselves into the harbor below.

Everyone is issued identical full-body jumpsuits, over which a safety harness is snugly fit. Climbers are urged to remove their pants, as they’re likely to get quite warm inside the suit.

Dan and his crew needed to have a bit of discussion about this, thus we endured several minutes of “are ewe really taking your pants off?”, “I’m certainly not taking mah pants off!”, eventually “duh we have to change here in fron’ of everone?!” and my personal favorite, compliments of Dan, “What if it chafes?”

The jumpsuit is pretty basic. You step into it and pull the zipper up the back to close. Simple, quick. Our guide, Nick, admonished us to take care anyway, noting that there was always one in the group who put it on backwards.

My money was on Dan, and he didn’t disappoint. Thus we endured several more minutes while Dan’s wife and friends (for some reason it took several of them) helped Dan back out of the jumpsuit, and then coaxed him through the proper way to dress. 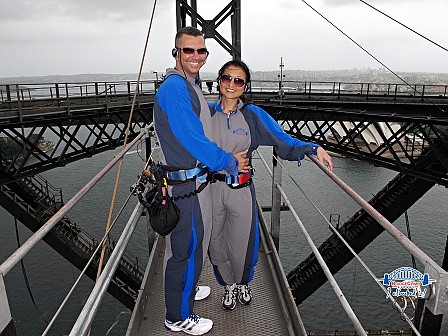 Gives you an idea of how high up we were

Once attired we moved on to the rest of our gear, which included the aforementioned harness, a raincoat in a pouch and a handkerchief, thoughtfully provided because the howling winds atop the bridge often cause a runny nose.

Dan thankfully kept mostly silent, but his wife filled the void by asking if the raincoat was also a parachute, and whether or not the handkerchiefs were really clean.

Nick, visibly losing patience with today’s Stupid Tourists, playfully suggested that if her handkerchief were already damp she should exchange it for another one.

Misses Dan missed the joke, and suspiciously sniffed the cloth kerchief. (Does someone else’s snot have a particular odor?)

Dan seemed dejected to be left out of the current round of Stupid Questions, and piped up, asking what would happen if he fell off the bridge.

To this I swear I heard Nick mumble under his breath “Your family would probably thank us,” but out loud he assured Dan that the harness would keep him firmly tethered in place.

Finally we were ready for the climb! Determined to be as far away from Dan as possible, and by this point fervently wishing he would fall, I went last. (Nick actually said going last was best as it was the only way to get even a little separation from the group.)

It was very cool. Not scary, well, to anyone but Dan the cousin he married, and not something that would satisfy thrill-seekers, but very cool. And it was indeed the very best way to see one of the world’s great cities.

Sydney Harbor is often cited as the world’s most beautiful natural harbor. Modern additions like the Sydney Opera House only enhance its luster, though the iconic symbol of the city almost never came to be. 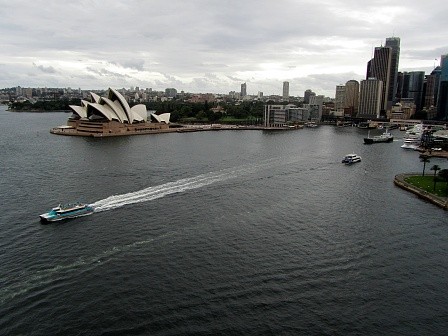 Looking across the harbor at the Opera House

Planning for the Opera House began in the 1940s, and 233 proposals from architects in 32 countries were accepted. Surprisingly, the winning design came from little known and undistinguished Danish architect Jørn Utzon.

Utzon was apparently not always the easiest person to get along with during construction, and there were delays of many years in which the design was altered and updated.

In 1965 corrupt buffoon Sir Robert Askin was elected leader of the New South Wales government, and immediately picked a fight with Utzon.

The row escalated for a year until Utzon resigned in fury, vowing never to return to Australia. The aforementioned Sir Buffoon, noted for having “no interest in art, architecture or aesthetics,” then tried to quash the project, or at least scale down the impressive bits. Thankfully he failed, and the Opera House finally opened to much fanfare in 1973, nearly four decades after planning began.

Today Sydney is known around the world for this gorgeous monument to human imagination and ingenuity. I’ve marveled at it from every angle on visits to Sydney for nearly thirty years, and the sight never gets old.

Construction of the harbor bridge itself went ever so much better.

The final design was accepted in 1924, and construction completed only eight years later. Nearly 500 structures, many of which were private homes laying in the path of the planned bridge, had to be destroyed, but residents cheerfully moved. In typical Aussie fashion the only real row ensued when the government moved to tear down the local pub. Residents organized a sit-in, and refused to leave until a new pub had been built across the street at the Australian Hotel.

Gotta have your priorities.

Doesn’t matter how you do it (they offer The Express Climb, The Discovery Climb or The Bridge Climb, available at “Dawn, Day, Twilight and at Night”), it’s an amazing experience, one I’m delighted we did. It was wonderful, even while enduring Dan and his gaggle of Stupid Tourists.