These Crabs Have Hair 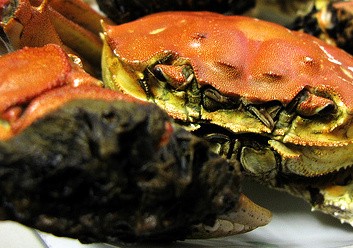 “It’s a Shanghai delicacy. You must try it!”

My associate, Sia, and James, an executive with a Shanghai television station, picked me up at my hotel, and with those words made me regret I’d left the Snickers sitting in my mini-bar.

We set off for dinner at Herbal Gardens in the Xian Tan Di district. James explained that Shanghai’s local delicacy is a crab from the Yangtze River delta surrounding the city. These crabs are covered in hair. They’re in season during the winter, and I’m just missing the “best time of the year” for them, but James assured me they’d still be delicious.

Being disciplined and discreet, Sia said nothing.

I make myself giggle.

Regrettably, no one else found this as funny as I did. Apparently they’re quite proud of their crabs around here.

After we were all seated and the meal had been ordered a waiter brought out the still-alive furry crustaceans for our inspection. They were tightly wrapped in string, I guess to prevent them grabbing some unsuspecting would-be diner in their pincers. I asked how long they’d been so bound (I don’t know why it bothered me, but it did.) At least five days, came my answer.

The one being presented for my approval glared at me with contempt. We shared a look. I wanted him to know I was moved by his captivity. I briefly considered grabbing him and whisking him away to freedom. Somehow, however, I suspected an American charging into the street with an imprisoned crab would get said American arrested.

I gave him a sympathetic smile, as if you say “I’ll free you if I can.”

I think we both knew that was a lie.

My new friend was soon carted off by the waiter to be boiled alive. Poor crab. It was bad enough it had spent its last week of life bound and tortured. Now it was going to be devoured by some ignoramus who didn’t appreciate its matte of dark, silky hair. An ignominious end, to be sure.

Disappointingly, you do eat the brains.

There’s a very specific method to eating a hairy crab, and it includes ripping the shell open and digging out the neon yellow brains. I was not overwhelmed by this idea. I tried to fake my way through it, but of course, being the foreigner, all were eager to see how I’d react to my first hairy crab.

I reacted by doing my damnedest not to vomit on the table.

I thought to calm my stomach by focusing on the other dishes being served. These included frog, cow intestines and what were described as “vegetables”, but were in fact carefully concealed peppers designed to sear the eyeballs out of my skull.

What’s a guy gotta do to get a burger around here?